True, “quirky Las Vegas” almost sounds redundant, but even beyond this city’s expected wackiness, you can find some wonderfully peculiar and offbeat attractions. The city has become something of a repository of odd collectibles—where else would you find the Liberace Museum, the Pinball Museum, or Haunted sights tour all within a couple of miles? For even more quirkiness, check out some of the tchotchke-filled pawn shops around town or simply people-watch at one of the many 24-hour coffee shops on or near the Strip. 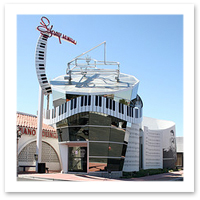 If you’re out to find the kitschiest place in town, this is the jackpot: here you’ll find costumes, cars, photographs, even mannequins of the late entertainer in addition to occasional musical events to celebrate the masterfully flamboyant pianist, who died in 1987 at age 67. And although it’s set in a humdrum shopping center away from the Strip, it’s worth the trip to admire “Mr. Showmanship’s” trippy collectibles and memorabilia. In addition to the pianos (one of them was played by Chopin; another, a concert grand, was owned by George Gershwin), you can see his Czar Nicholas uniform and a blue-velvet cape styled after the coronation robes of King George V. Be sure to check out the gift shop—where else can you find Liberace soap, ashtrays, and candelabras? Learn more »

Filled to the brim with more than 140 games from all eras, the Pinball Hall of Fame has everything from the old woodrail models of the 1950s to modern games with fancy effects and complex play. Though this may sound more like an arcade than a museum, the local club is a nonprofit organization whose goal is to preserve this piece of Americana and share the joy of the silver ball with as many folks as possible. Plus, your quarters get donated to the local Salvation Army. Entry is free, and most games cost 25¢ or 50¢. Learn more »

The Roman Catholic cathedral often has standing room only on Saturday afternoon, as visitors pray for luck—and sometimes drop casino chips into the collection cups during a special tourist mass. Periodically, a priest known as the “chip monk” collects the chips and takes them to the respective casinos to cash them in. Those staying on the south end of the Strip might find the Shrine of the Most Holy Redeemer (E 55 E. Reno Ave.) more convenient; it has three Saturday and five Sunday masses. Learn more »

Sure, it’s essentially a used car lot masquerading as a museum, but the 250 antique, classic, and special-interest vehicles will keep gear-heads entertained for hours. All the vehicles on the lot are for sale, so the collection is constantly changing. But at any given time you might see “famous” cars, like the Trans Am that acted as the pace car at the 1983 Daytona 500, or cars of famous people, like the ’39 Chrysler the late Johnny Carson rode in to his senior prom. Many of the cars are just amazing old vintage rides: a Supercharged ’57 T-Bird, or the immaculate ’29 Rolls-Royce Springfield Phantom I straight out of The Great Gatsby. Learn more »

Admit it—you’re just as mesmerized by all the sequins and fancy headpieces of a classic feather show as we are. On this tour, a real showgirl escorts you backstage to see firsthand the workings behind the curtains for this $50 million stage production. The hour-long tour shows you the mechanics of the stage, costumes, and dressing rooms. Visitors must be 13 years or older and should be able to move up and down several cases of stairs. Learn more »

As you ride through the streets of Las Vegas on this 2 1/2 hour tour, your guide, dressed as a mortician, tells the tales of Sin City’s notorious murders, suicides, and ghosts (including Bugsy Siegel, Elvis, and Tupac Shakur). A 30-minute Rocky Horror-like sideshow, called Haunted Vegas, runs prior to the 21-stop tour. The same company offers the Vegas Mob Tour, which gives you a glimpse into the city’s gangster past. Make reservations in advance and note that kids have to be 13 for the Haunted tour and 16 for the Mob tour. Learn more »