Our favorite cruise editor, Doug Stallings, was lucky enough to tour the Queen Elizabeth in New York City as she makes her domestic debut. Along with two other Cunard Ships, there were three Queens in New York City. Check out our Cruise section for more on Cunard line, and full reviews of the Queen Mary 2 and Queen Victoria.

When I toured Queen Mary 2 last summer, I was impressed by the decor (which was almost elegant, not just cruise-ship elegant) as well as the very grand public spaces. Queen Elizabeth, which I visited today, isn’t quite as grand, but it is just as toned-down as one might hope for an upscale cruise ship done in art-deco style. It’s a beautiful ship and didn’t feel all that busy despite hordes of touring media and travel agents (not to mention 2,000-some passengers), unless you were hanging around the main bank of elevators, which were perpetually crowded. I remember thinking the same thing about Queen Mary 2, which is quite a bit bigger and carries some 600 more passengers; where you can actually feel the size difference is actually the width of the ship; passages on Queen Elizabeth are noticeably narrower than on her larger fleetmate (about 30 feet, in fact).
The Verandah restaurant, which you’ll find in place of the Todd English restaurants on Queen Mary 2 and Queen Victoria, is probably more to the taste of Cunard clientele since it serves traditional French cuisine. There’s something I like about this classic cruise line, which actually enforces its dress-code in the main dining rooms and has real Shakespearean actors along with dancers and singers. 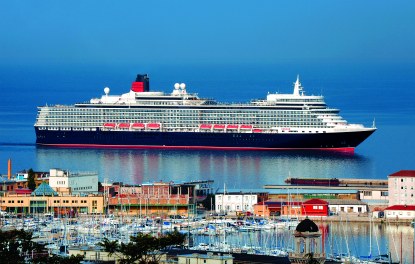 Although the deck plans for Queen Elizabeth appear to be nearly identical to her fleetmate Queen Victoria, make no mistake—this queen bears her own regal trappings. A successor to her namesake, the original Queen Elizabeth, which entered service in 1940, Cunard’s latest liner boasts touches of art deco that recall a time when the first Queen Elizabeth ruled the waves. As a successor to Queen Elizabeth 2 as well, the newest Cunarder to bear the name also reflects that great liner via artwork and memorabilia and has its own nautically themed Yacht Club, named after the lively aft lounge on QE2.
Curved staircases, geometric patterns, and spectacular artwork grace the soaring Grand Lobby, which is overlooked by the two-tier Library—a calm, wood-paneled haven bathed in natural reading light and crowned with a leaded glass ceiling. As on her fleetmates, double- and triple-height spaces play a large part in defining Queen Elizabeth’s grand interiors; however, there’s still the warmth of an authentic British pub, a clubby cigar room, and lounges with intimate seating areas where you might feel you’ve stumbled into a high society event of the 1930s or 1940s. 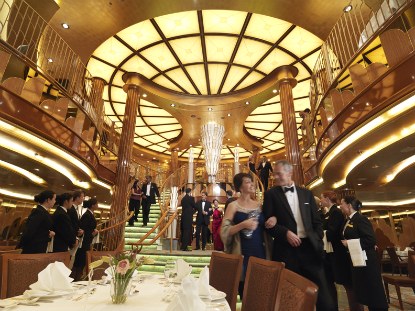 The Britannia Restaurant serves dinner in two assigned seatings for most passengers, while those in Britannia Club, Princess- and Queens Grill–classes dine in a single open seating at an assigned table. The Verandah, the alternative restaurant serving French cuisine, requires reservations and has a fee. A proper English tea is served daily and room service is always available. 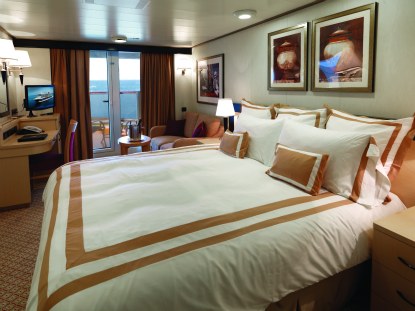 Although there are more than two dozen stateroom and suite categories from which to choose, cabins really fall into eight basic configurations. At the top are the Queens Grill suite categories, which have the most luxurious amenities; next are Princess Grill suites; next are the Britannia Club AA balcony staterooms; and finally come the standard staterooms (many with a balcony) as well as inside cabins, whose passengers dine in the Britannia Restaurant. The majority of the cabins fall into the standard categories. More than 86% of the staterooms on the ship are outside and 76% have private balconies. 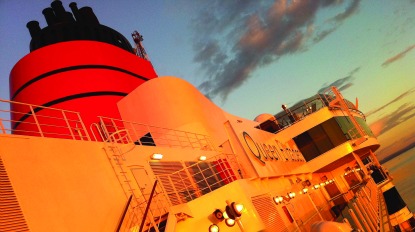 Pros: Whether you want to learn a new style, or brush up on your technique, you’ll find professional dance instructors on board. No one has to be a wallflower—a bonus for single women are the dance hosts who make sure they aren’t overlooked when the orchestra begins playing in the main ballroom. The Cunard Book Club—selections change quarterly—offers the opportunity for thought-provoking literary discussions led by the ship’s Librarian or one of the Hostesses, who provide a short history of the author and lead the discussion.
Cons: Although Queen Elizabeth is more akin to a cruise ship than a true ocean liner, she still provides a more formal and traditional experience. Service is certainly "white glove," but it’s more international than British. If you aren’t an Anglophile, you might not appreciate the Britishness of a Cunard ship.