News Apeksha Bhateja It's a Tie: The 2 Most Annoying Airline Passenger Behaviors of 2022
News5 Top Free Things to Do in Québec City

5 Top Free Things to Do in Québec City 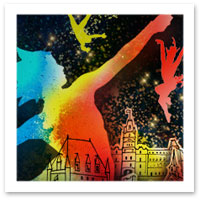 Quaint, cobbled and meticulously-preserved, Québec City has long been seen as an affordable alternative to European destinations. After all, it’s a place where you can speak french without popping for a transatlantic plane ride, and drink in the ambiance of Old World cafés without forking over budget-busting Euros. Factor in all the fabulous freebies being offered this summer and you’ll understand why the 400 year-old capital of “New France” is one of the best vacation values around.

Québec’s most famous export, Cirque du Soleil, celebrates its 25th birthday by bringing its 25th big-top show (the insect-themed OVO) to the provincial capital in August. With adult tickets selling for as little as $55 CND, the price is good. Zilch, of course, is even better—and that’s what you will pay to see Cirque’s other local production: Les Chemins Invisibles. Hmmm. Can you say “vive la différence”? Part street theater, part staged event, “The Invisible Paths” is a free outdoor extravaganza featuring 100-odd circus performers. You can catch it Wednesday to Sunday through September 6 in the Saint-Roch district. The 70-minute show, which plays here exclusively, starts at 9 pm most of the month, fast-forwarding to 8:30 pm as of August 26. 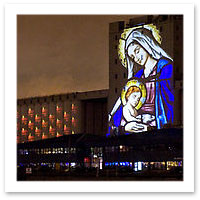 Want to bone up on Québec’s back story? The Image Mill, a sound-and-light show designed by internationally-acclaimed artist/director Robert Le Page, flashes through four centuries in about 40 minutes. Working on the premise that a picture is worth 1000 words, it projects a sequence of evocative images on side-by-side grain silos which together constitute the world’s largest screen: one that is 10 stories high and over five football fields long. Though widely visible, the best viewing point is in the Old Port behind the Espace 400e Pavilion where free standing room spaces are plentiful. (For $15 you can snag a seat in the same area). The Image Mill runs Wednesday to Sunday until September 13; beginning at 9:30 pm in August, 9 pm in September.

Follow up your high-tech history lesson by taking in some free sites. As you would expect in a spot so old, many are divine…literally. Must-see sanctuaries include the ornate, oversized Basilique Notre-Dame-de-Québec and Église Notre-Dame-des-Victoires (erected in 1688, its Québec’s oldest church). Also on the list, Holy Trinity Anglican Cathedral: built at the behest of King George III, it’s the British answer to Papist pomp. For a more secular experience, take a turn around the city’s UNESCO-designated ramparts or drop by Hôtel du Parlement (the province’s parliament). The latter, sitting just beyond the Old City gates, is a grand edifice that was inspired by the Louvre and you can see inside it on half-hour tours offered daily in summer. 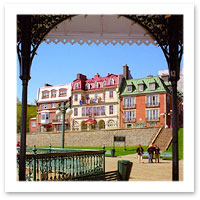 Terrasse Dufferin—a broad, river-view boardwalk backed by the iconic Fairmont Château Frontenac—draws enough buskers, balloon sellers and plain ol’ people watchers every summer to create a carnivalesque atmosphere. Yet this year, as the terrace marks its 130th anniversary, things are more animated than ever because costumed interpreters and concert musicians have been added to the mix. As if that wasn’t enough, until October 12, you can see what lies beneath the terrace at the Saint-Louis Forts and Châteaux archeological site. Having uncovered the basement of the former Governors’ Residence, Parks Canada now leads free tours through it. Artifacts discovered during the three-year dig are on display nearby at the Parks Canada Service Centre.

Riding in a caleèche (Québec City’s variation on the horse-and-carriage theme) is undeniably romantic. But you’ll pay a pretty penny for the pleasure: upwards of $80 for 45 minutes. Hoofing it, on the other hand, costs absolutely nothing and really is the best way to get around given that the major attractions here lie within a compact area and the scenic, labyrinthine streets seem tailor-made for strolling. Simply download one of the tourism board’s three free walking maps; then set off to explore at your own pace. If your feet do get weary, don’t worry: Écolobus will come to the rescue. The electric 20-seat minibus provides scheduled, no-charge service within the Old City. You can find an online timetable (in french only) at the civic transit website.