News Samantha Linnett Is This Budget Travel Hack Worth the Risk?
NewsDaniel Boulud Talks Travel, Toronto, and Why NYC is Home

Daniel Boulud Talks Travel, Toronto, and Why NYC is Home 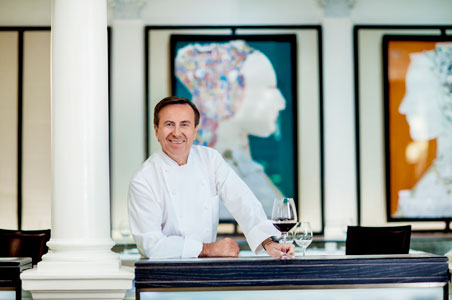 He is a New Yorker and a Michelin-rated Chef, a Frenchman and a father with an unrelenting zest for cooking. His satisfying food has soul and creativity, a foundation of tradition and his own distinct spin.

Daniel Boulud, the award-winning chef and culinary authority, is also a serious traveler. With 15 restaurants in 5 countries, Chef Boulud is consistently on the go. Where does he find the time to brainstorm cookbook ideas, spend time in the kitchen with family, or travel for pleasure? We sat down with him recently at Café Boulud in the Four Seasons Toronto to find out.

Why you were drawn to Toronto to open Cafe Boulud—why should travelers have their eye on Toronto right now?

I have traveled to Toronto for years—it is home to exciting neighborhoods, culture, shopping. And we are near the Niagara region and its wine. As for the restaurant, the Four Seasons is the benchmark of excellence and I wanted to be part of the new hotel. It is an exciting time for food in Toronto.

If you went to the airport right now and could go anywhere, where would you go?

Bora Bora. I would like to chill out there. I am curious to go to every colony France has left. These places are so far from France, but have so much French culture to offer.

You are originally from Lyon. Describe a perfect day in your hometown.

I would have breakfast at Les Halles (the famed indoor food market in Lyon), maybe some oysters, charcuterie, and local white wine. Then I would go to the old bookstores and browse through shelves of cookbooks. For lunch, it must be a local bouchon. For the afternoon, I could go to one of the old Gallo-Roman theaters, or walk in the hills. At night, a meal at Paul Bocuse.

If you could not cook or work for an entire day in New York, what would you do?

Art, music, friends, and food—that’s all I need. I would go to the Met or MOMA during the day and then maybe Lincoln Center for some good music or opera.

What advice would you give young people––not just about cooking—but about finding success in whatever they are passionate about?

Don’t be too distracted. There are too many distractions today. And don’t be too opportunistic—patience is important. Success isn’t about revolutionizing, but about being connected emotionally to what you do every day. It is also important to build an organization, a support system that will help you, so you don’t burn out. Consistency, quality, and living up to your commitments are all essential in the long run.

What New York restaurants and chefs inspire you?

I’m blessed to have made New York my home, to work in a real international city, where my food has an audience. Many chefs inspire me here. George Mendes is serious, consistent, and driven. I love Franny’s, Roberta’s, and the Frankies. Daniel Humm is doing some very interesting things.

What is one tool that all home cooks should have in their kitchen?

A good braising pot. A multi-purpose pot that distributes heat evenly, like castiron. Then you can make incredible one pot meals, starting with ingredients that take the longest to cook, and finishing with the freshest ingredients last.

What markets around the world are best for food lovers?

Life around the market is the definition of a city. I love the markets in Istanbul, Barcelona, and Lyon. And Tokyo and London and Beijing…

After a night of cooking at DANIEL (his flagship 3 Michelin-starred NYC restaurant) what’s a typical late night snack?

In my house, I always have dried sausage, hard cheese, and good bread. (He does. He took out his iPhone to show me pictures). I will open a tin of sardines and put that on some toast, then make more toast to finish the sardines. That’s my snack. Voila.