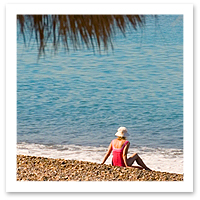 Not all beaches in Mexico are created equal…

Bucerías
Eleven miles north of Nuevo Vallarta, the substantial town of Bucerías attracts a loyal flock of snowbirds, which has encouraged the establishment of small hotels, apartments for rent, and good restaurants. The beach here is endless: you could easily walk along its medium-coarse beige sands all the way south to Nuevo Vallarta. The surf is gentle enough for swimming but also has body-surfable waves.

Punta de Mita
About 40 km (25 mi) north of Puerto Vallarta is Punta de Mita, home to the posh Four Seasons and the boutique resort Casa Las Brisas. Just a few minutes beyond the Four Seasons, the popular beach at El Anclote has half a dozen simple restaurants, including El Dorado and Tino’s. This is a primo spot for viewing a sunset. Artificially calmed by several rock jetties and shallow for quite a ways out, it’s also a good spot for children and average to not-strong swimmers to paddle and play.

Sayulita and San Francisco.
The increasingly popular town of Sayulita is above El Anclote beach and about 45 minutes north of PV on Carretera 200. Some say it’s like PV was 40 years ago. Sayulita has heavenly beaches. Long waves make the waters here good for learning to surf. Fifteen minutes farther north is San Francisco, unofficially known as San Pancho, with modest rental bungalows and eateries, a mile-long, barely developed stretch of sand, and more great surfing spots.

Playa Conchas Chinas
Frequented mainly by visitors staying in the area, Conchas Chinas is a series of rocky coves lapped lazily by crystalline water several miles south of Centro. The beaches here are made up of millions of tiny white shells broken and polished by the waves. There aren’t any services here, save a few portable toilets. These individual coves are perfect for reclusive sunbathing, lazy bathing, and when conditions are clear, for snorkeling ’round the rocks.

Playa Mismaloya
La Jolla de Mismaloya hotel fills a prime spot here, meaning (to put a positive spin on things) that you can avail yourself of the hotel services while enjoying the public beach. There are also half a dozen seafood palapas on the sand, and fishing boats pull ashore near the mouth of the Rio Mismaloya. Beyond the palapas are the ruins of accommodations used during the filming of The Night of the Iguana. Offshore is Los Arcos, a protected rock formation great for snorkeling and diving. From Mismaloya you can drive or catch a cab (about a 25-minute ride) on the dirt road to El Edén: a jungle restaurant-bar where you can sip Don Crispin, a regional tequila, and swim in the river or the pool.

Quimixto
Between the sandy stretches of Las Animas and Majahuitas, and about 20 minutes by boat from Boca de Tomatlán, is rocky Quimixto, whose calm, clear waters attract boatloads of snorkelers. There’s just a narrow beach here, with the usual seafood eateries. Day-trippers routinely rent horses (ask at the restaurants) for the 25-minute ride — or only slightly longer walk — to a large, clear pool under a waterfall. You can bathe at the fall’s base, and then have cool drink at one of the two casual restaurants.

La Manzanilla
It’s less than a kilometer in from the highway to the beach at La Manzanilla, on the southern edge of large Bahia de Tenacatita, 47 miles north of Manzanillo. Informal hotels and restaurants line the main street of the town. Rocks dot the gray-gold sands and edge both ends of the wide beach. The bay is calm. At the beach road’s north end, gigantic, rubbery-looking crocodiles lie heaped together just out of harm’s way in a protected mangrove swamp.

Playa Tenacatita
Named for the bay on which it is lies, Tenacatita is a lovely beach of soft sand about 30 km north of San Patricio Melaque (which is, in turn, 95 km/57 mi north of Manzanillo). Dozens of identical seafood shacks line the shore; birds cruise the mile-long beach, searching for their own fish. Waves crash against clumps of jagged rocks at the north end of beach, which curves gracefully around to a headland. The water is sparkling blue. There’s camping for RVs and tents at Punta Hermanos, where the water is calm, and local men offer fishing excursions.