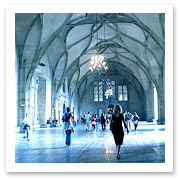 Prazsky Hrad (Prague Castle)
Despite its monolithic presence, Prague Castle is not a single structure but rather a collection of buildings dating from the 10th to the 20th century, all linked by internal courtyards. The castle (photo, top) is at its mysterious best in early morning and late evening, and it’s incomparable when it snows. Jirska 3. 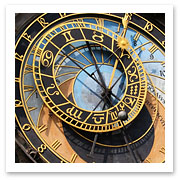 Stare Mesto (Old Town)
Old Town Square is the center of tourist activity in Prague, so it’s usually full of people from virtually every nation on earth. Follow the narrow streets leading out of the square for a stroll on pathways designed by the city’s medieval architects. It’s here you can find some of the most atmospheric and expensive hotels, not to mention many restaurants and pubs.

Nove Mesto (New Town)
“New” is always a relative term, and that’s no less the case for Prague’s New Town, which was planned by Charles IV in the 14th century. Wenceslas Square, a commercialized grand boulevard lined with shops, restaurants, and hotels, forms the backbone of New Town. It’s also a part of town where you can find a good bit of the city’s nightlife. 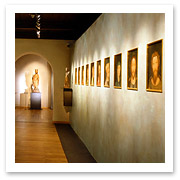 Hradcany (Castle Area)
The Castle district is known for being the seat of Prague Castle, and its sights can easily take up most of a day. At night, floodlights light up the area, giving the impression that the castle is floating above the city. 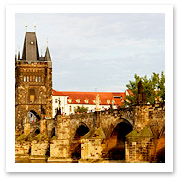 and baroque buildings, including numerous foreign embassies and stately palaces. When you feel like taking a break, grab a sandwich and look for one of the “secret” gardens tucked into the neighborhood.

The Jewish Quarter’s ghetto survived for more than 600 years until it was torn down in the 19th century. 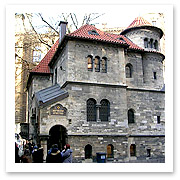 Today, art nouveau structures have replaced the former ghetto buildings, and some of the city’s finest shopping can be had along Parizka street.