Get acquainted with some of Asian hottest hotels… 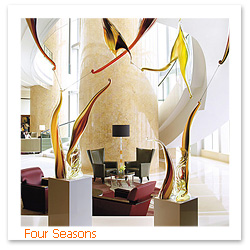 The Four Seasons is everything you’d expect it to be, and much more. Rooms have an elegant, colorful Chinese theme that is both classical and effortlessly modern at the same time. The simplicity of design is by no means just trendy minimalism — the smallest of the rooms is 500 square feet. World-class linens, feng shui elevator banks, heated infinity pools, tropical rain showers, 42-inch plasma TVs, hot-rock massages, clairvoyant service, fantastic restaurants — the list of attributes is endless. $$$$

Garden View YWCA
The Garden View is a cylindrical guesthouse on a hill overlooking the botanical gardens and harbor, and its well-designed rooms make excellent use of small irregular shapes and emphasize each room’s picture windows. If you want to do your own cooking, ask for one with a kitchenette (which will include a microwave oven); if not, the coffee shop serves European and Asian food. You can also use the swimming pool and gymnasium in the adjacent YWCA. Garden View is a five-minute drive (Bus 12A or Minibus 1A) from Central and a few minutes from the Peak tram station. $$

Bishop Lei International House
Owned and operated by the Catholic diocese of Hong Kong, the Bishop Lei guesthouse is up the Midlevels Escalator at the top of SoHo. Rooms are quite small but functional, and half of the rooms have harbor views. Although it’s economically priced, there is a fully equipped business center, a workout room, a pool, and a restaurant serving Chinese and Western meals. $ 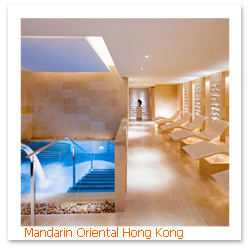 Landmark Mandarin Oriental
The design of the Landmark Mandarin is dazzling, and a complete departure from the Mandarin’s standard MO. The three room types are named for their square footage; the midrange L600 is the most interesting, with a round bathroom fascinatingly placed at the center of the space. Everything from iPod docks to surround-sound speakers are controlled through your TV remote, and the 21,000-square-foot spa has Turkish baths and tropical-rain saunas. $$$$

Mandarin Oriental Hong Kong
In September 2006, the legendary Mandarin Oriental, which has served the international elite since 1963, completed a top-to-bottom renovation that included the installation of one of the city’s most elaborate spas. Five new categories of rooms, from “study” to “harbour,” span a wider price range than ever before. All have been updated to a space-age standard: flat-panel LCDs, iPod docks, Hermés toiletries. On the 25th floor, rising high above the Central skyline, are renowned chef Pierre Gagnaire’s restaurant and the panoramic M Bar. $$$$

Island Shangri-La
The lobby of the deluxe Shangri-La, affectionately known to locals as the “Island Shang,” sparkles with more than 780 dazzling Austrian crystal chandeliers hanging from high ceilings. Take the elevator up from the 39th floor and see the mainland’s misty mountains drift by. Rooms are some of the largest in Hong Kong and have magnificent views; all have large desks and all-in-one bedside control panels. For upscale dining, try formal French eatery Pétrus on the top floor. $$$$ 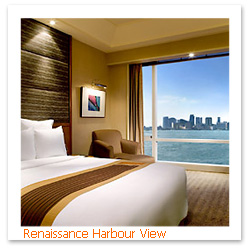 Renaissance Harbour View
Sharing the Hong Kong Convention and Exhibition Centre complex with the Grand Hyatt is the Renaissance Harbour, a modest but attractive hotel. Guest rooms are medium size with plenty of beveled-glass mirrors that reflect the modern decor. Many rooms have good harbor views and all have high-speed Internet access. Grounds include a large outdoor pool, gardens, a playground, and jogging trails, which makes this a good place to stay if you are with children. The soaring lobby lounge is a popular rendezvous spot. $$-$$$

Harbour Plaza Hong Kong
The opulent Harbour Plaza has one of the best harbor views in town. Rooms are large, comfortable, and contemporary. Dining options include a Japanese robatayaki grill restaurant and a lively pub called the Pit Stop. A scenic rooftop pool, a fitness center, and a spa are also on-site. Although it’s in the residential area of Whampoa Gardens, which is out of the way, hotel shuttles run the 10- to 15-minute trip to Tsim Sha Tsui all day. Close by is the railway station, with trains to China and a ferry terminal for Hong Kong Island. $$$-$$$$

Langham Place
When the Langham opened in March 2005 it ushered in a new era of prestige for its once seedy but refreshingly un-Westernized Mong Kok neighborhood. Mao’s Red Guards stand at attention at the entrance to this sleek, cyber-age hotel full of glass and steel; it’s a great exemplar of that specific science-fiction feel that defines much of modern Hong Kong. The hotel’s top three stories are occupied by the Chuan (Chinese spa), which has panoramic city views to accompany treatments. The price is lower than what you’d pay for such luxury elsewhere in town. $$-$$$ 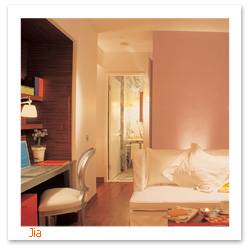 Jia
Jia is a wonder to behold, beginning with the busy and hip “scene” in the lobby, bar, and restaurant. Although the sculptural furniture and accompanying trendiness won’t be everyone’s cup of tea, this is still a groundbreaking concept that is helping to redefine the modern Hong Kong hotel landscape. For instance, it doesn’t have rooms; rather, it has “apartments,” with mini-kitchens, dining tables, and cookware. You can choose between smaller “studios” or the larger one-bedroom “suites,” which have separate bedrooms. $$-$$$

Intercontinental Hong Kong
The opulent InterContinental Hong Kong offers some of the finest views of the Hong Kong. Simply coming for a cocktail at 8 p.m. to take in the view is memorable. The lobby has a delicious airy quality, and the impeccably modern rooms are just as exciting, with luxuriously large beds, desks with ergonomically designed chairs and superlative showers in the bathrooms. Corner suites have 180-degree harbour views, Dom Perignon is the house champagne in the executive lounge, and the spa is worth e-mailing home about. $$$$

Salisbury YMCA
This upscale YMCA is Hong Kong’s most popular and is great value for your money. Next to the Peninsula and opposite the Cultural Centre, Space Museum, and Art Museum, it’s in an excellent location for theater, art, and concert crawls. The pastel-color rooms have harbor views and broadband Internet access. The Y also has a chapel, a garden, a conference room with a built-in stage, a children’s library, and excellent health and fitness facilities, which include a dance studio and even a climbing wall. Restaurants in the area are cheap and good, and the shopping is great. $-$$