There’s more to Portugal than Lisbon. For many travelers, though, the lack of traditional chain hotels in the country’s outback lends the impression that there’s no there there. This couldn’t be farther from the truth. Indeed, there are lots of lodging options — all intriguing, many beguiling — in Portugal’s far-flung climes.

Probably the most familiar accommodations are the pousadas (www.pousadas.pt), which, like Spain’s well-known paradors, consist of state-run hotels in restored castles, palaces, monasteries, convents, and other charming buildings.

The Associação de Turismo de Habitação (Association of Residential Tourism or TURIHAB, www.turihab.pt) has its Solares de Portugal (Manor Houses of Portugal) program, which consists of remodeled, privately owned houses that can accommodate a handful of guests. TURIHAB groups its properties into three categories: casas antigas are elegant, often antiques-filled rural manor houses; quintas and herdades are slightly more rustic, though often stately farms and estates; casas rústicas are smaller, more rustic houses — some in the countryside, others in villages. 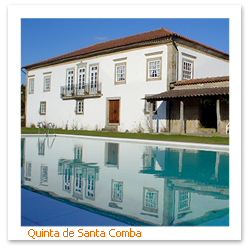 Finally, for active types, there are termas (www.termasdeportugal.pt), or thermal-springs spas, with hotel accommodations. Expect the four-star spas to come with four-star prices; but hotels in smaller spas are often reasonably priced (depending on season). Here are some of our favorites in each category.

What’s nearby: The town of Braga, which prospered in the sixth century under the Visigoths. Braga’s massive Cathedral (Rua do Souto) encompasses the Museum of Religious Art, which has a stellar collection of religious art and artifacts.

Vila Duparchy, Luso
As you pass through the old gate and go up the long, curved, tree-lined driveway, you’ll soon realize this is no ordinary hotel. The two-story stucco house was built in the late 19th century but has been receiving guests only since 1988. Upstairs are six rooms; each has a fireplace, a modern bath, and period furnishings. On the ground floor are three comfortable sitting rooms, which you share with the owners and other guests. The spacious grounds are full of trees and flowers. Evening meals can be arranged in advance. Rua José Duarte Figueiredo 148, outside Luso on E234. 231/930790. 6 rooms, pool. AE, MC, V, $$$$ 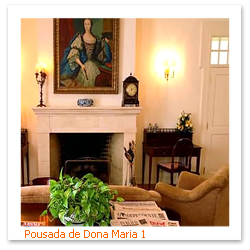 Pousada de Dona Maria 1, Queluz
Marble hallways lined with prints of old Portugal give way to high-ceilinged rooms furnished with 18th-century reproductions. Only breakfast is served in the pousada itself, but the cooking hits the mark across the road in the old palace kitchens, now the Restaurant de Cozinha Velha, with its imposing open fireplace and a vast oak table. Rte IC19, 2745-191. www.pousadas.pt. 24 rooms, 2 suites. Cable TV, bar. AE, DC, MC, V. $$$

What’s nearby: Queluz’s National Palace (Rte IC19) is worth a look. Inspired by Versailles, the palace has formal gardens and rooms filled with period furniture, art, and frescoes.

Pousada do Castelo, Óbidos
Except for the electric lights and the relatively modern plumbing, the Middle Ages prevails in this pousada, which occupies parts of the castle that Dom Dinis gave to his young bride, Isabel, in 1282. Room 2, in one of the massive stone towers, is especially evocative. Other rooms are individually furnished with 16th- and 17th-century reproductions. The restaurant’s food and service are worthy of royalty; there’s a curtained alcove where you can dine in privacy and still enjoy a view of the castle walls and valley below. Paco Real, 2510-999. www.pousadas.pt. 6 rooms, 3 suites. Cable TV. AE, DC, MC, V. $$$-$$$$

What’s nearby: In addition to the town’s medieval castle, there are the Eburobritium Roman Ruins, encompassing ancient baths and a forum. It’s an easy half-mile walk from the city gate, through farmlands and a grove of poplar trees.

Pousada Castelo de Palmela, Palmela
More than 500 years old, this imposing structure atop a vast hill (affording amazing views) was a convent for centuries. Visitors can still see portions of its church, which was largely ruined in the great earthquake of 1755. Although somewhat austere in appearance, Palmela’s rooms are comfortable. The public areas are beautifully decorated and the restaurant serves fine regional and international cuisine. www.pousadas.pt. 23 double rooms, 5 suites. Air-conditioning, Cable TV, Internet in public areas, phone. $$$ 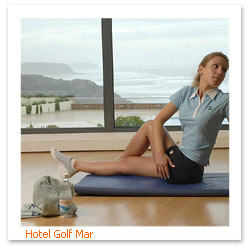 Hotel Golf Mar, Torres Vedras
The location — on a rise overlooking a broad, sandy beach — and the golf course are the main reasons to come. The huge, concrete-block facade is hardly alluring and the interior is a bit dull, but there are plenty of ways to work out or relax, including at a hydrotherapy center with Turkish bath. http://spa.turismovimeiro.com/ 252 rooms, 9 suites. Restaurant, 9-hole golf course, 2 pools, massage, sauna, spa, 3 bars, Wi-Fi. AE, DC, MC, V. $$$$

What’s nearby: Check out the extensive fortifications throughout town erected by the Duke of Wellington in 1810 as part of a secret plan for the defense of Lisbon.

What’s nearby: Curia is a quiet retreat of shaded parks and a small lake just a half hour’s drive from the summer beach scene. 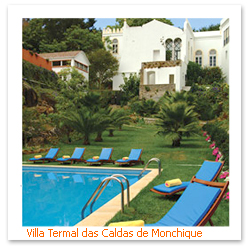 Villa Termal das Caldas de Monchique, Monchique
This glamorous spa-resort rests among luxuriantly verdant hills in the western Algarve, just minutes from the finest beaches. Monchique has been a thermal hot springs since the heyday of the Romans. The villa, comprised of a hotel and an inn (both in beautifully restored buildings), have been built around the springs. Rooms are handsomely appointed, many with 18th- and 19th-century-style furniture. The hotel and inn share a restaurant. In addition to a variety of “well-being” packages and sports activities, the complex is surrounded by a verdant forest conducive to long walks. www.monchiquetermas.com/. 103 rooms, private bathrooms, phones, air-conditioning, satellite TV. Thermal spa, solarium, sauna, outdoor pool. AE, V. $$$-$$$$

What’s nearby: From the Caldas de Monchique, follow the road north and within 10 minutes you will be in Monchique, known for its rich handicrafts, woodwork, and embroidery.