A Taste of Portland’s Microbrew Scene

Will you be toasting the new year with a frosty microbrew? For a beer-centric trip, consider Portland, affectionately deemed "Beervana" and "Munich on the Willamette," and boasting 35 craft breweries operating within city limits.

That’s more than any other city in the world. Bumper stickers across town toast to Brewtopia with catchy slogans: Just Brew It and SNOBs (Supporters of Native Oregon Beer). Besides a notoriously misty climate conducive to the brewpub culture, the region is fertile with the essential ingredients that are needed to make high-quality beer, and is surrounded by the largest hop-growing regions in the United States. Fourteen varieties of hops are grown in the nearby Willamette Valley, and Oregon is overall the second-largest hop-growing state in the country.

The Portland metro area triumphs as the largest craft brewing market in the nation. The granddaddy breweries BridgePort Brewing Company and Widmer Brothers Brewing are still landmark institutions—but the future tastes hoppy good with the new generation of brewers emerging. 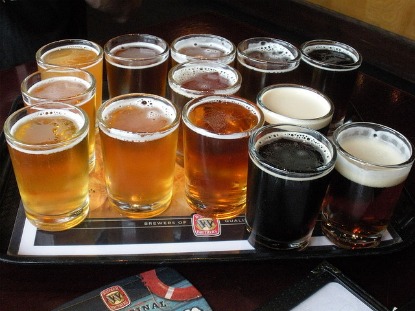 Whether you’re thirsty for a pale ale or an over-the-top stout, Portland breweries will tap it. Bountiful throughout the city, it is close to impossible to pick favorites. But if we had to—here are some of our top picks ranging from traditional to avant-garde.

Widmer Brothers Brewing Company
929 N. Russell St. 503/281–2437 www.widmer.com
Founded in 1984, this is Oregon’s largest brewery, and their Hefeweizen is still the top-selling craft beer in the state. Brewery tours take place on Friday at 3 PM and Saturday at 11 AM and noon. See Fodor’s Restaurant Review.

Hopworks Urban Brewery
2944 SE Powell Blvd. 503/232–4677 www.hopworksbeer.com
In addition to brewing only organic beer, "HUB" is powered with 100% renewable energy. Pint picks include the Organic Survival "Seven-Grain" Stout, finished with the iconic Stumptown Hairbender espresso and their namesake Organic Hopworks IPA, a Northwest classic. Brewery tours, which cost $5, take place on Saturday at 11 AM and 3 PM.

Hair of the Dog Brewing Co.
61 SE Yamhill St. 503/232–6585 www.hairofthedog.com
Beer geeks must visit, known for unusual and bottle-conditioned beers that improve with age, similar to wine. This brewery can accommodate tours, but only with advance scheduling. Tasting fees apply and vary.