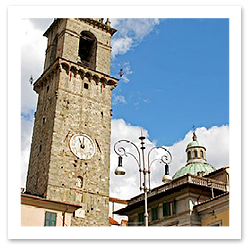 Where: Pontremoli, Italy, lies in the Apennine Mountains along the old Via Francigena (road to France) in northern Tuscany’s Lunigiana region.

Why: Pontremoli was an important stop on the pilgrim route from Canterbury to Rome, and it retains its look from that time. Despite its well-preserved medieval streets and buildings, a photogenic castle, and intriguing local cuisine, this quiet, quaint town is blissfully tourist-free.

Top Outing: The Castello del Piagnaro crowns a hill overlooking the town. Reached via a narrow alleyway, the castle offers views of countryside, town, and arched, stone bridges crossing the river below. In the castle you’ll find the Museo delle Statue Stele, a repository for anthropomorphic stone statues unearthed by local farmers, excavation crews, and highway workers. The most ancient of them are over 5,000 years old. Each one depicts a single, stylized human figure carved on an upright stone slab, often holding a weapon.

Also Worth Seeing: The Campanone bell tower dominates the central Piazza della Repubblica. This iconic city symbol was part of a wall built in 1322 by conqueror Castruccio Castracani. Like a frustrated parent trying to separate squabbling siblings, Castracani built a wall through the middle of town to quash a bitter war between the Guelphs and Ghibellines, rival factions supporting, respectively, the Papacy and Holy Roman Empire. The cozy piazza is best in late afternoon. Grab a gelato and join the locals on their passeggiata (stroll), walking to the accompaniment of pealing church bells.

Where to Stay: Quiet, modern, three-star Hotel Napoleon is near the city center.

When to Go: Because it’s in the mountains, Lunigiana is cooler than the rest of Tuscany in summer, but wait until fall for colored foliage and the wild mushroom harvest.

How to Get There: Pontremoli is just off the A15 Autostrada between La Spezia and Parma.