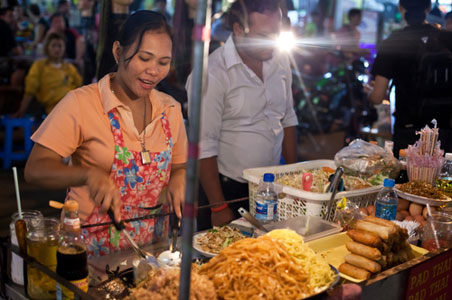 At the top of everyone’s must-try Thai these days: Andy Ricker’s Pok Pok mini-empire in Portland, Oregon and NYC. Ricker’s love affair with Thai food began when he was backpacking in Asia in 1987. He has since returned countless times, exploring and developing an affinity for street vendors all over the east. We chatted with the chef at Feast Portland, where he curated "Night Market," a tasting event dedicated to Asian street food.

Q. How do you find the best street food when traveling?

A. To the casual outside observer and tourist it is almost impossible to find the best stuff, because the best stuff is going to be in a neighborhood you’re not going to go to. The best stuff is going to be written entirely in an unfamiliar language and it is unlikely that the person there is going to speak English. Even if you could find it you wouldn’t know what to order because you wouldn’t know what they are making. But having said that, the best thing to do if you are traveling is go to an area of the city where there is a mix of locals and foreigners, and look for places that are really busy. In Thailand, for example, look where the Thai and Farang hang out.

Q. What other countries do you like to visit to eat great street food?

A. Bangkok and Chiang Mai are two of my favorite places, obviously. I also like Singapore, and I find Macanese food very interesting—in Macau there are mostly restaurants but there is some interesting street food. Anywhere in the Yunnan province of China there is a fantastic outdoor eating, especially in the capital, Kunming. And then there’s Saigon, Vietnam. Malaysia—Penang and Kuala Lumpur—are also amazing, but more so probably Georgetown. Georgetown is incredible—it’s very close to the Thai border so the markets there tend to be fresher, and there are a lot of people from India, China, Malaysia, and Thailand all nibbling there.

Q. What are the warning signs for street stalls to avoid?

A. If you’re asking about how to avoid food poisoning, my advice is the same as looking for a good place to eat, which is to look for a busy place. When a spot is busy, the food doesn’t sit around as much. But my personal opinion, which I think is borne out by medical evidence, is that there is no way to tell how you got food poisoning unless you don’t eat anything for 24 hours and then eat something and then don’t eat anything for another 24 hours and then get a test. Because you can get gastroenteritis (or whatever) by touching something and then touching your upper lip without even knowing about it…and then you blame whatever you ate earlier that day. But you really don’t know. I believe that it is probable that I have gotten as sick from eating in a hotel as I have from eating in the street.