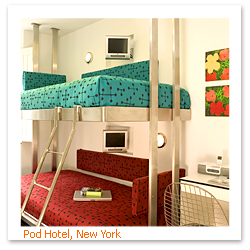 Budget travelers really want to be Pod People — and no, that’s not the plot of a new sci-fi thriller. A growing segment of the hotel industry believes that price-conscious, stylish travelers will happily stay in truly tiny spaces as long as they’re well designed. In these lodgings, which have been dubbed “pod hotels,” you sacrifice space and amenities like staff and restaurants — and sometimes even private bathrooms and windows — in exchange for greatly reduced rates and ramped-up style.

Pod hotels have been around Asia for decades, but they’ve been slow to materialize in Europe and the U.S. That said, it appears that a full-scale invasion is planned in locations around the world in 2007. In general, they are great for a short stay or for people who don’t spend much time in their hotel rooms. Those who suffer from claustrophobia should book elsewhere. If you’re eager to experiment with a pod hotel, here are a few recommendations.

New York City’s new Pod Hotel is cheap and cheerful, with prices starting at $89 ($139-plus for a private bath) and a great location on 51st Street between 2nd and 3rd Avenues. The cool retro-design rooms have iPod docking stations, dimmer-control lighting systems, free Wi-Fi access, and semi-largish screen LCD TVs. An outdoor café is slated to open in the spring. Don’t expect luxe linens or fab toiletries, and obviously the rooms are small. That said, the rooms aren’t that much smaller than NYC hotels charging triple the price. 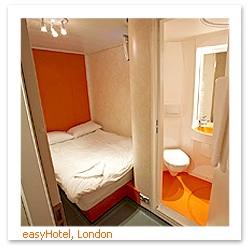 The idea behind the bright orange easyHotels, owned by easyJet’s Stelios Haji-Ioannou, is that you pay for a room — period. There are three in London and one in Basel, Switzerland. A Budapest location is in the works. Room sizes are very small, claustrophobically small, and insanely small. Bathrooms are the size of those on airplanes, and guests pay extra for windows and TVs. The upside? A sparkling clean room for as little as $35 a night, and sometimes less. EasyHotel plans to open 38 new properties across the Middle East, North Africa, India, and Pakistan within the next 5 years. If you don’t like the color orange, steer clear.

YOTEL, based in the United Kingdom, also offers high style, small rooms, and low prices. Set to open this spring in London’s Heathrow and Gatwick airports, the 10×10 foot rooms will cost about $150 a night, or $70 for a four-hour stay. The rooms are soundproof and each contains a sofa that converts into a double bed, a desk that pulls down from the wall, a teeny closet, a shower, wireless Internet, an iPod dock, and a flat-screen TV with surround-sound speakers. Windows offer an interior view of the hotel only, a design choice made to allow the hotels to be built inside of buildings such as airports. Check-in and check-out are self-serve and automated, as is the snack bar. Fifteen more YOTELS are planned, including one in the center of London slated to open in 2007.

Not all Pod hotels offer stripped-down simple lodgings. Qbic, with properties in Amsterdam and Antwerp, is all about atmosphere. Each 8×10 foot room has a four-poster Hästens bed, a tiny work space with an easy chair, Philippe Starck bathroom furnishings, TV, radio, safe, free wireless Internet and guest-controlled “mood lighting.” Guests check themselves in via a kiosk in the lobby. Each hotel has a communal area with vending machines stocked with organic, healthy snacks and simple meals prepared by local restaurants. The earlier you book, the cheaper the rates — rooms range from about $80 to $200 per night. 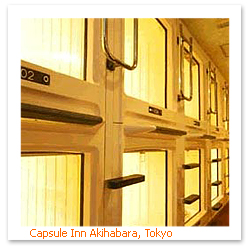 Pod hotels were inspired by Japan’s “capsule” hotels. Designed for businessmen who needed a place to crash overnight, the typical capsule hotel has a public lounge space with baths, and another large room filled with plastic individual sleeping units — the capsules. Each unit is a little over 3-feet high and wide and about six-feet long, and each has its own mini TV, radio, alarm clock, and lamp. If you just need an inexpensive place to sleep in Japan (they’re about 4000 yen per night, roughly $40 U.S. dollars), a capsule hotel might fit your needs. You can find them in most large cities in Japan. Not all capsule hotels accept westerners, though, and because the sleeping and bathing spaces are communal, not all are set up for female guests. Capsule Inn Akihabara, in Tokyo, has a separate space for women and is happy to host westerners.