Deals Leila Najafi Attention West Coast: You Can Now Book Flights to Paris for as Little as $321
Home  >  News   >   Hotels: The Pleasure Palaces of Central Europe 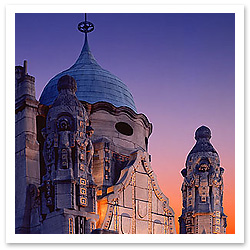 Nothing says old-world decadence more than the luxury hotels of Central Europe. Live dangerously and splurge on a penthouse at one of these palatial digs. Or do like the rest of us and just have a drink at the bar.

Four Seasons Hotel Gresham Palace Budapest, Budapest
This 1906 art nouveau treasure (photo, right) received a major overhaul after decades of neglect. It’s been on the radar of well-heeled visitors to Budapest since its reopening in 2004. Deep-soaking tubs, views of the Danube, and balconies are just a few of the perks available. The Pest location, at the end of the Chain Bridge, can’t be beat. A night in one of the world’s finest hotels should run you at least €300.

Carlo IV, Prague
Modern-day princes don’t sleep at the Prague Castle—they head straight to the Carlo IV for pampering. The in-house spa offers all the kneading services one could desire, and you’ll also find a sauna, Turkish bath, and an indoor swimming pool with a fountain. After an afternoon of sightseeing, the hotel’s Cigar Bar is the perfect spot to unwind over a glass of cognac. Expect to pay over €255 during peak season.

Schloss Obermayerhofen, Blumau, Austria
A true treasure in every sense, this hotel really is a palace. Old-world touches, including antiques, canopied beds, and rich tapestries, give the hotel an otherworldly feel. If you’ve always dreamed of a fairytale wedding, you’ll be glad to know that the hotel offers full wedding services. Every palace has a price tag—room rates start at €175 a night.

Goldener Hirsch, Salzburg
No two rooms are the same at this deluxe hotel, which actually consists of four town houses. Although it’s close to Mozart’s birthplace and other Salzburg sights, well-insulated walls keep out the bustle below. The exquisite bar is a worthy pre-dinner stop—order the Rendezvous with Susan, the hotel’s signature cocktail. Slumber sweetly starting around €200.

Imperial, Vienna
Adjacent to the famed Musikverein concert hall and two blocks from the Staatsoper is this legendary hotel. The emphasis here is on Old Vienna elegance and privacy, which accounts for a guest book littered with names like Elizabeth Taylor, Plácido Domingo, and Bruce Springsteen. Don’t leave without wandering the splendidly decorated lobby and imagining you’re at a party hosted by 18th-century resident Duke Philipp von Wurttenberg. Rooms cost over €300 a night during peak season.

Pucic Palace, Dubrovnik, Croatia
Housed in a former 18th-century palace, this small luxury boutique hotel is big on little details. Think dark oak parquet floors with hand-woven rugs and wood-beam ceilings, Italian mosaic-tile bathrooms supplied with Bulgari toiletries. The Pucic Palace is in Old Town directly across from the Gundulic Square. On summer afternoons, friends gather at the hotel’s outdoor Royal Café for coffee. You can spend a night in Dubrovnik’s ritziest hotel for around €225.