Plan a Trip to Spain: Madrid & the South

Spain is a difficult country to see in just one trip. For this itinerary (download the pdf) from Spain 2008, we focus on the Madrid and Andalusia.

If you want to see Andalusia, Madrid should be your airport of choice. Barcelona, Spain’s other main starting point, is really too far away to include in anything less than a two week vacation. You’ll be relying mostly on the high-speed rail connection, the AVE, which can get you from Madrid to Córdoba in under three hours and passes through the exceptionally pretty Castilian countryside, filled with olive groves and rolling fields. Consider renting a car for your exploration of Seville and Granada.

The best months to go to Andalusia are the shoulder months of October and November, and April and May. You’ll be able to see the cities going about their normal business, but with moderate temperatures and fewer crowds. 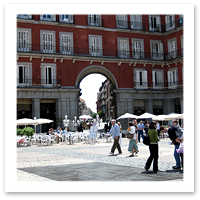 The elegant Plaza Mayor (photo, right) is the perfect jumping-off point for a tour of the Spanish capital. To the west, see the Plaza de la Villa, Royal Palace, the opera house and the royal convents; to the south wander around the maze of streets of La Latina and the Rastro and indulge yourself in local tapas. Start or end the day with a visit to the Prado, the Museo Thyssen-Bornemisza, or the Centro de Arte Reina Sofía.

On Day 2, visit the sprawling Barrio de las Letras. Surrounding Plaza de Santa Ana, it was the favorite neighborhood of writers during the Spanish golden literary age in the 17th century, and it is still cramped with theaters, cafés, and good tapas bars. It borders the Paseo del Prado on the east, allowing you to comfortably walk to any of the art museums in the area. If the weather is pleasant, take an afternoon stroll in the Parque del Buen Retiro.

For your third day in the capital, wander along Chueca and Malasaña, the two neighborhoods most favored by young Madrileños. Fuencarral, a landmark street that serves as the border between the two is one of the city’s trendiest shopping enclaves. From there you can walk to the Parque del Oeste and the Templo de Debod—the best spot from which to see the city’s sunset. Among the lesser-known museums, consider visiting the captivating Museo Sorolla, Goya’s frescoes and tomb at the Ermita de San Antonio de la Florida, or the Real Academia de Bellas Artes de San Fernando for classic painting. People-watch at any of the terrace bars in either Plaza de Chueca or Plaza 2 de Mayo in Malasaña.

Logistics: If you are traveling light, the subway (Metro) or the bus will take you from the airport to the city for €1 to €1.25. A taxi will do the same for around €25 to €30. Once in the center consider either walking or taking the subway rather than driving in gridlock traffic. 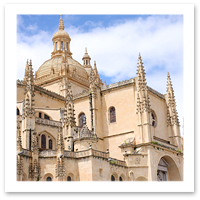 Making excellent half- or one-day side trips from the capital are Toledo and Segovia (photo, right), two of the oldest Castilian cities—both with delightful old quarters dating back to the Romans and El Escorial, which houses the massive monastery built by Felipe II. Two other nearby towns also worth visiting are Aranjuez and Alcalá de Henares.

Logistics: In 2007, Toledo and Segovia became part of the high-speed train line (AVE), so you can get to both of them in a half-hour from Madrid. To reach the old quarters of both cities take a bus or cab from the train station. Or take the bus from Madrid; by bus is also the best way to get to El Escorial. Reach Aranjuez and Alcalá de Henares via the intercity train system.

Day 6: Córdoba & Its Mosque or Extremadura

This capital of both Roman and Moorish Spain was also the center of Western art and culture between the 8th and 11th centuries. Córdoba’s sprawling mosque (now a cathedral) and the medieval Jewish Quarter bear witness to the city’s brilliant past. From Madrid you can rent a car and visit the lesser-known cities north of Extremadura (Guadalupe, Trujillo, and Cóceres). You can sleep over in Cáceres, a UNESCO World Cultural Heritage city, and return to Madrid the next day.

Logistics: The AVE train will take you to Córdoba from Madrid in under three hours. A good alternative is to sleep over in Toledo, also on the route heading south, and then head to Córdoba the next day. Once in Córdoba, take a taxi for a visit out to the summer palace at Medina Azahara. 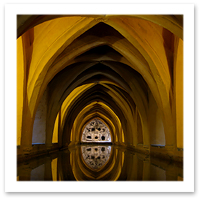 Logistics: From Seville’s AVE station, take a taxi to your hotel. After that, walking and hailing the occasional taxi are the best ways to explore the city.

The hilltop Alhambra palace, Spain’s most visited attraction, was conceived by the Moorish caliphs as heaven on earth. Try any of its famous tapas bars and teashops, and also roam the magical steep streets of the Albayzín, the ancient Moorish quarter.

Logistics: The Seville-to-Granada leg of this trip is best accomplished by renting a car. However, the Sevilla-to-Granada trains (four daily, just over three hours, costing less than €21) are an alternative. An alternative route is to head first from Madrid to Granada, skipping Córdoba, and then from Granada to Seville.