News Larry Bleiberg You Can Finally Look Inside This Stunning D.C. Landmark. But Only for Another 25 Days
Home  >  News   >   Plan Your Tours of the Statue of Liberty & Ellis Island

Plan Your Tours of the Statue of Liberty & Ellis Island 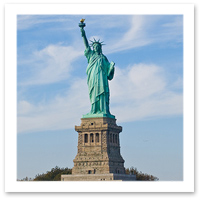 A quintessential part of any visit to New York City, a trip to the Statue of Liberty and Ellis Island takes up the better part of a day. It involves a ferry ride, long lines, security checks, and ultimately, the rare opportunity to stand within the single most powerful symbol of American ideals, not to mention one of the world’s great monumental sculptures. It’s worth the effort. It’s no overstatement to say that these two sights have played defining roles in American culture.

The Statue of Liberty

Impressive from the shore, the Statue of Liberty is majestic in person and up close. For millions of immigrants, the first glimpse of America was the Statue of Liberty. You get a taste of the thrill they must have experienced as you approach Liberty Island on the ferry from Battery Park and witness the statue grow from a vaguely defined figure on the horizon to a towering, stately colossus.

The statue itself stands atop an 89-foot pedestal designed by American Richard Morris Hunt, and inscribed with Emma Lazarus’s sonnet “The New Colossus” (“Give me your tired, your poor, your huddled masses yearning to breathe free . . .”). This massive pedestal is now the only area to which visitors have access, only with timed tickets and after an extensive security check.

Inside the pedestal is an informative and entertaining museum. Highlights include the torch’s original glass flame (replaced because of water damage; the current flame is 24-karat gold and lit at night by floodlights), full-scale copper replicas of Lady Liberty’s face and one of her feet, Frédéric Bartholdi’s alternative designs for the statue, and a model of Gustave Eiffel’s intricate framework.

The observatory platform is a great place for a photo op; you’re 16 stories high with all of Lower Manhattan spread out in front of you. You’ll then descend to the promenade at the bottom of the base, where you’re still four stories high. Be aware that to reach the platform you’ll need to walk up 26 steps from the elevator drop-off point.

Liberty Island has a pleasant outdoor café for refueling as well as a large cafeteria. The gift shop sells trinkets little better than those available from street vendors. 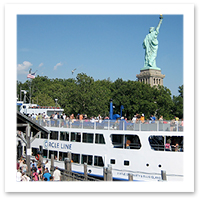 Know Before You Go

You’re allowed access to the museum only as part of one of the free tours of the promenade (which surrounds the base of the pedestal) or the observatory (at the pedestal’s top). The tours are limited to 3,000 participants a day. To guarantee a spot on one of the tours, you must order tickets ahead of time—they can be reserved up to one year in advance, by phone or over the Internet. A limited amount of same-day standby tickets are available at the Castle Clinton and Liberty State Park ticket offices.

Once you reach the island, there are no tickets available. And without a ticket, there is absolutely no admittance to the museum or observatory. Note that there has been no access to the torch since 1916 (so you didn’t just miss your chance), and the narrow, double-helix stairs leading to the statue’s crown have been closed to visitors since 9/11. You will, however, get a good look at the statue’s inner structure on the observatory tour through windows that look straight into the statue. Be sure to try the view from several different viewing spots to get the whole interior.

Have you visited the Statue of Liberty? Rate your experience

Chances are you’ll be with a crowd of international tourists as you disembark at Ellis Island. Close your eyes for a moment and imagine the jostling crowd 100 times larger. Now picture that your journey has lasted weeks at sea and that your daypack contains all your worldly possessions, including all your money. You’re hungry, tired, jobless, and homeless.

This scenario just begins to set the stage for the story of the millions of poor immigrants who passed through Ellis Island at the turn of the 20th century. Between 1892 and 1924, approximately 12 million men, women, and children first set foot on U.S. soil at the Ellis Island federal immigration facility. By the time the facility closed in 1954, it had processed ancestors of more than 40% of Americans living today.

The island’s main building, now a national monument, reopened in 1990 as the Ellis Island Immigration Museum, containing more than 30 galleries of artifacts, photographs, and taped oral histories. The centerpiece of the museum is the white-tile Registry Room (also known as the Great Hall). It feels dignified and cavernous today, but photographs show that it took on a multitude of configurations through the years, always packed with humanity undergoing one form of screening or another. While you’re there, take a look out the Registry Room’s tall, arched windows and try to imagine what passed through immigrants’ minds as they viewed lower Manhattan’s skyline to one side and the Statue of Liberty to the other. 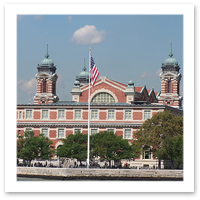 The museum’s features include the ground-level Railroad Ticket Office, which has several interactive exhibits and a three-dimensional graphic representation of American immigration patterns; the American Family Immigration Center, where for a fee you can search Ellis Island’s records for your own ancestors; and, outside, the American Immigrant Wall of Honor, where the names of more than 600,000 immigrant Americans are inscribed along a promenade facing the Manhattan skyline.

The gift shop has a selection of international dolls, candies, and crafts. You can personalize a number of registry items here as well.

Making the Most of Your Visit

Because there’s so much to take in, it’s a good idea to make use of the museum’s interpretive tools. Check at the visitor desk for free film tickets, ranger tour times, and special programs.

Consider starting your visit with a viewing of the free film Island of Hope, Island of Tears. A park ranger starts off with a short introduction, then the 25-minute film takes you through an immigrant’s journey from the troubled conditions of European life (especially true for ethnic and religious minorities), to nervous arrival at Ellis Island and introduction into American cities. The film is a primer for the exhibits and will deeply enhance your experience.

The audio tour ($6) is also worthwhile: it takes you through the exhibits, providing thorough, engaging commentary interspersed with recordings of immigrants themselves recalling their experiences.

Have you visited Ellis Island? Rate your experience

Suggestions from the Forums

The travelers in our forums suggest that if time is a consideration, the Staten Island Ferry could be a good alternative to a full-blown visit:

“I would just hop on the Staten Island ferry (every 15 minutes or so) to get a closer view.” –nytraveler (view more responses)

Also, there’s no harm in arriving early for the pre-departure security check:

“I arrived at Battery Park around 8:30 am, with a ticket for a 9:30 ferry. I was told by an employee for StatueCruises it didn’t matter that I had a 9:30 ticket — just get in line and wait for it to start for the day. So I did. The line began moving around 9:00 and went quickly. The ticket-takers didn’t mind that I had a 9:30 ticket and I proceeded to board, going through airport-like security, without a problem. The ferry pulled out around 9:40.” –shocco67 (view more responses).

For more advice on planning a trip, ask the Forums to help you with your NYC itinerary or visit our New York City travel guide on the web, or look for the recently released New York City 2009 guidebook.