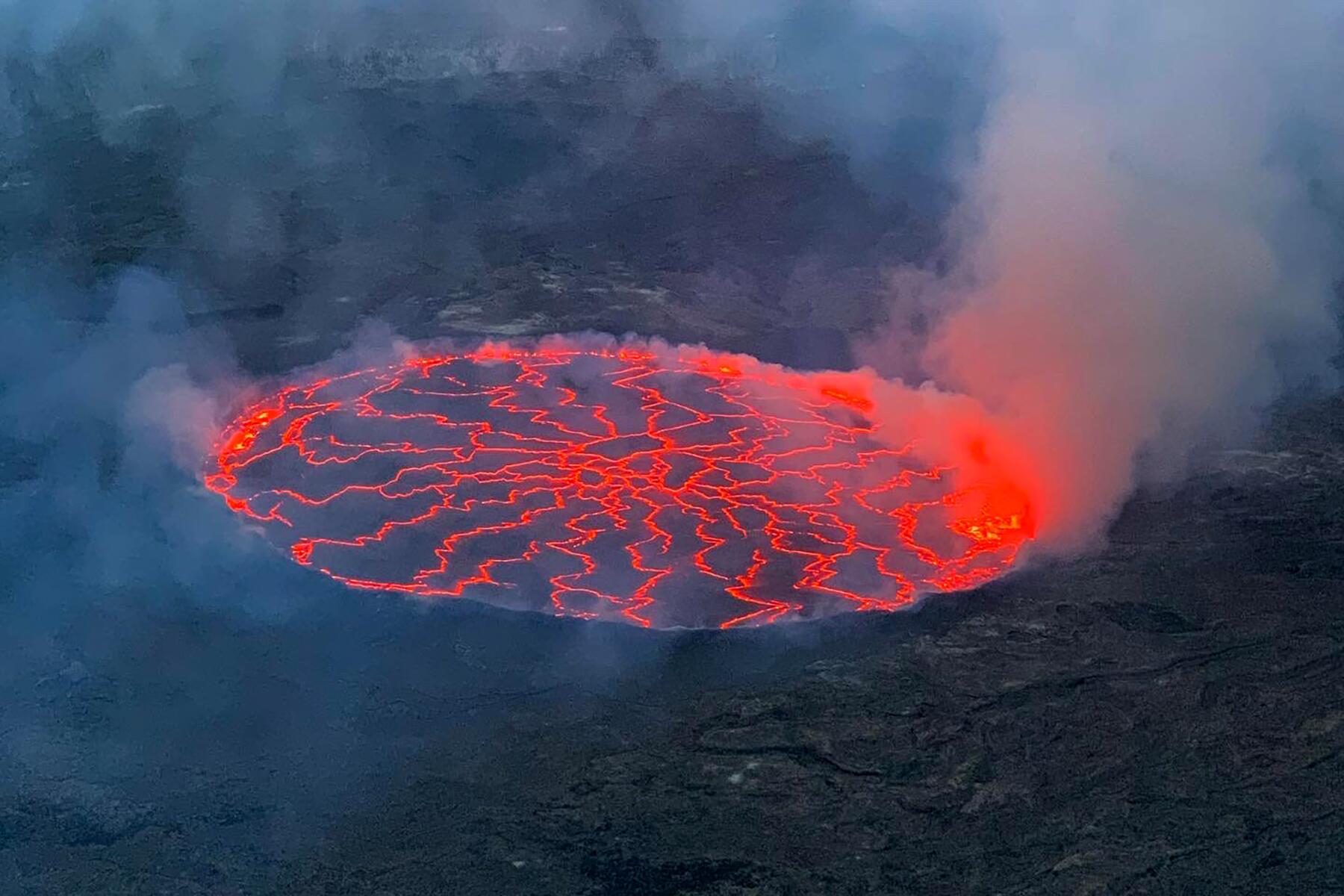 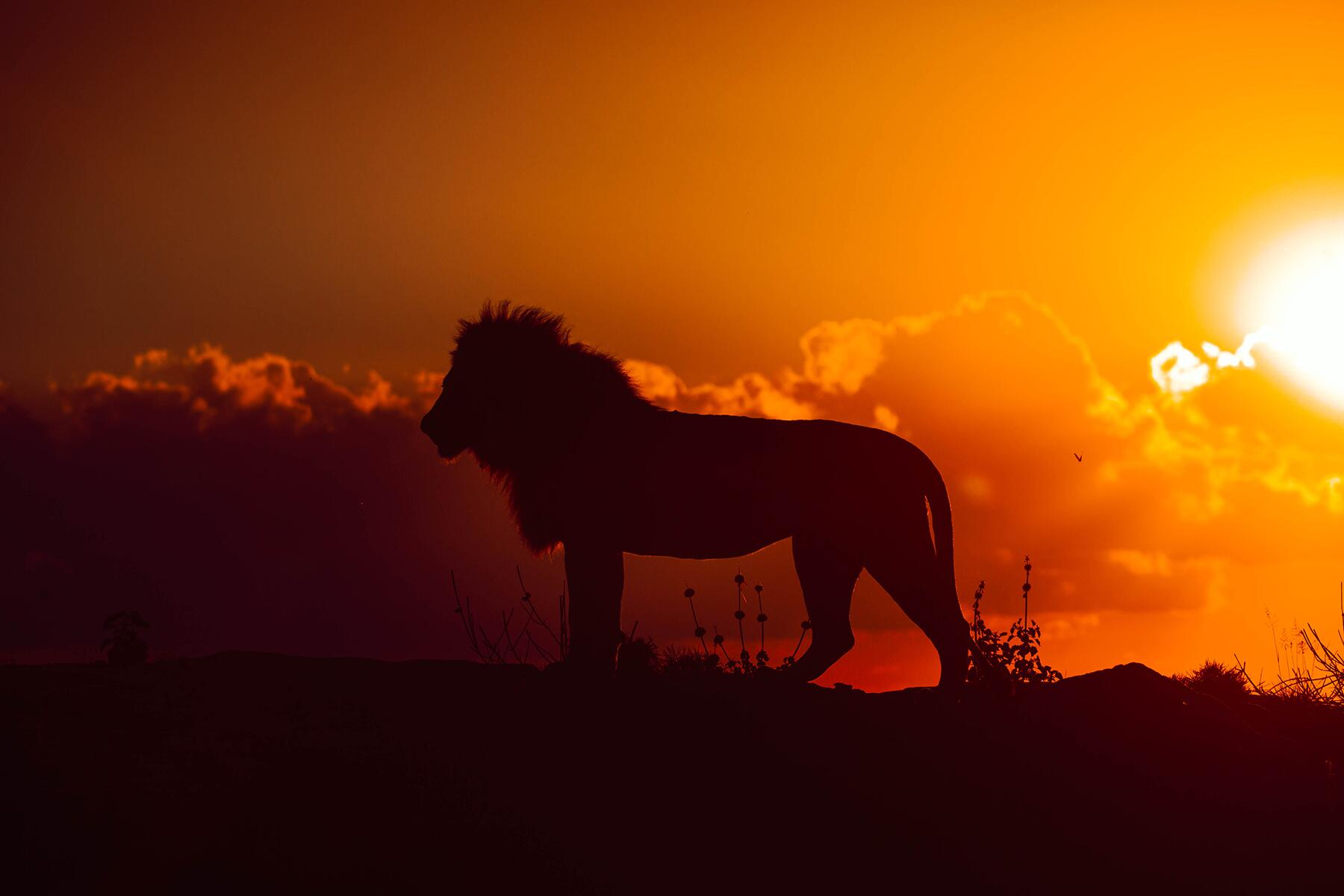 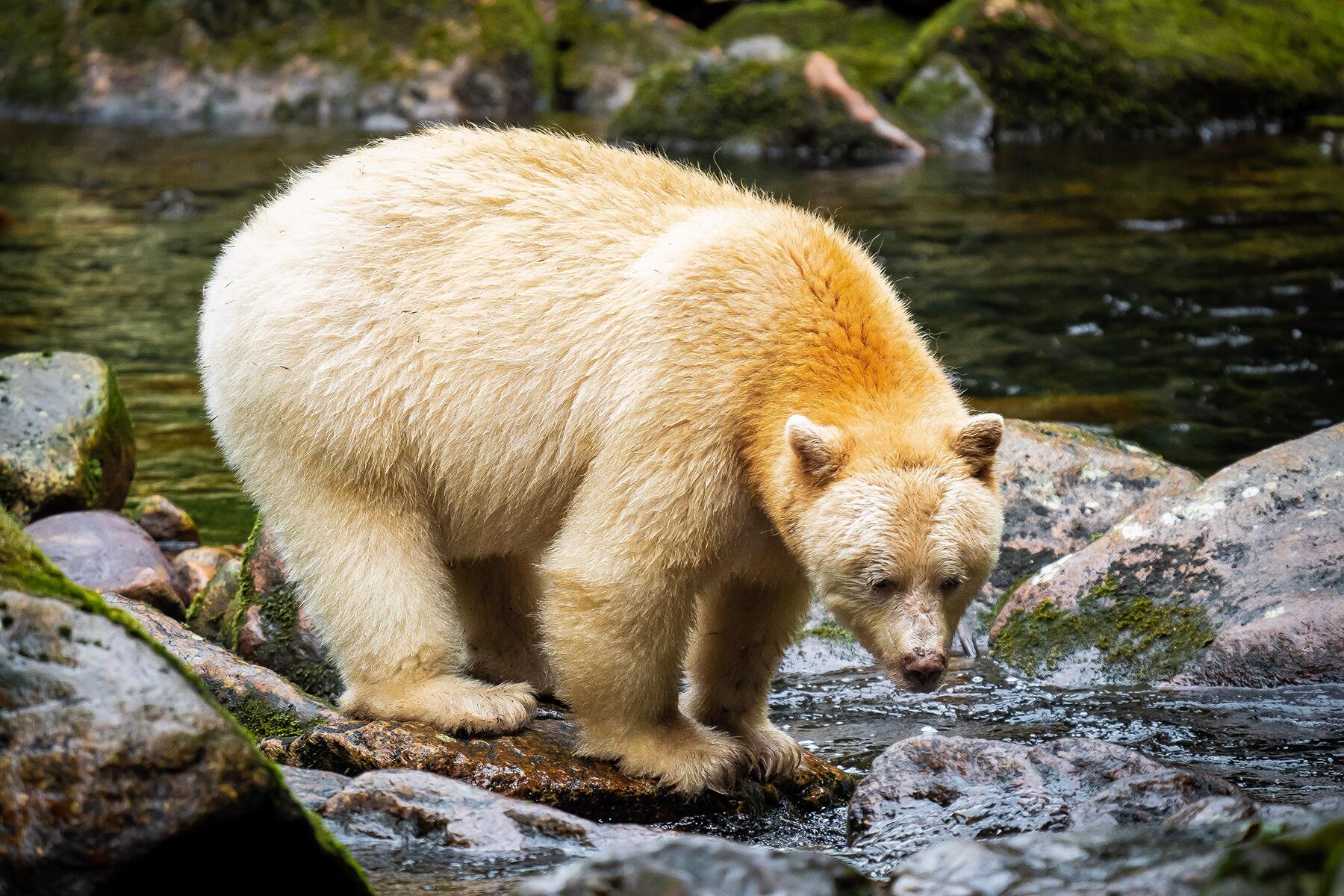 Outdoors Jonny Bierman How I Found the Rarest Bear in the World
Home  >  Outdoors
PHOTO: AmbrosiniV/Shutterstock

You're not seeing things, these islands come (and go) depending on the tides.

Believe it or not, there are some islands around the globe that are technically only islands when the tide is in, allowing visitors to literally walk across a causeway when the tide is ebbing. These tidal islands can be connected with the mainland either by a sandy, natural path, or even a more secure causeway, suitable for cars–so long as the tide is out!

Here are some of our favorite “sometimes-islands” worth exploring. 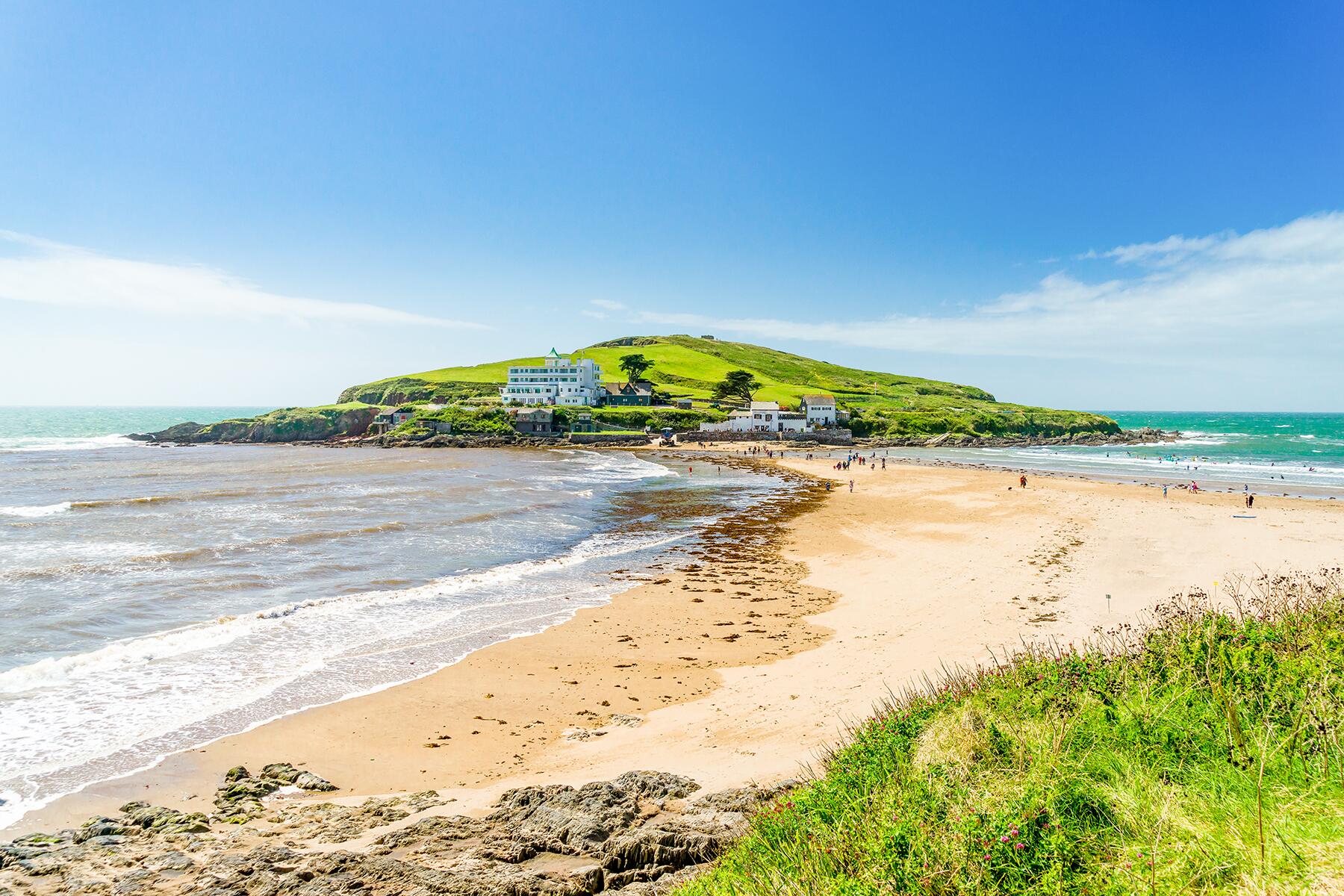 Burgh Island is connected with the coast and the small village of Bigbury-on-Sea by a wide sandbank, making it easy to walk to the island when the tide is out. Once across, there are a few buildings, including an atmospheric pub, The Pilchard Inn, and even a former pirate haunt, which has been popular for 700 years. Just across the one track on the island lies the Burgh Island Hotel, a time-capsule example of Art Deco perfection. So much so, it’s said that it inspired Agatha Christie to write two novels, And Then There Were None and the Hercule Poirot mystery, Evil Under the Sun. The island offers great views across the coast from up high, where an old ruin marks the peak. For hotel guests, or stragglers who missed the coming of the tide, the island operates a shuttle bus on stilts, which can drive along the sandbar even when it is covered by water. 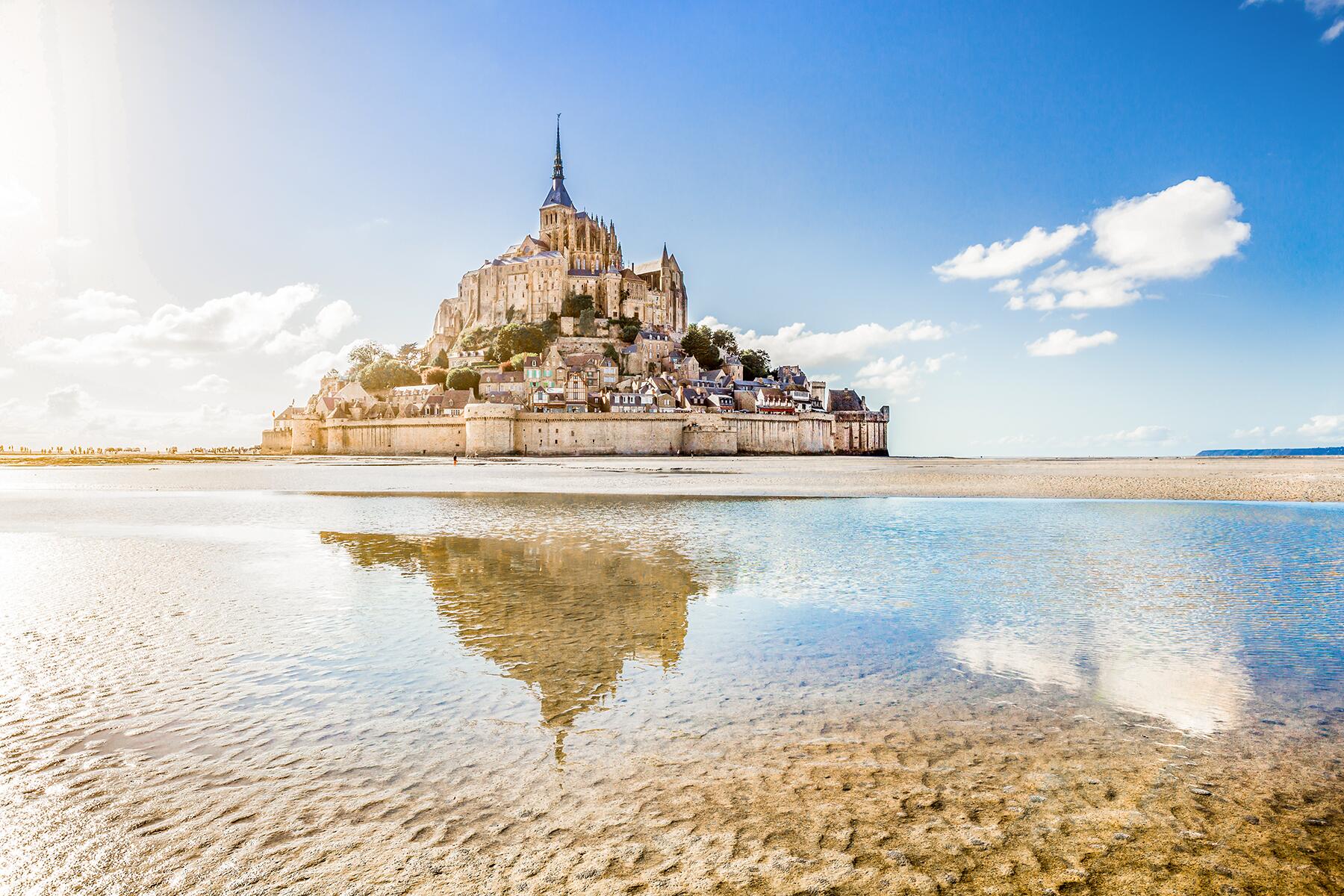 Dating back to the 8th century, the monastery on this tidal island off the coast of Normandy in the English Channel, has long been a pilgrimage site. Once it was believers who scrambled across, but they often drowned trying to reach the island. Now it’s tourists who for safety and convenience, can reach the monastery and its tiny village via a convenient and secure causeway. Sadly, this tidal island–despite lying on a coast that experiences one of the highest tidal ranges in the world–is barely even a sometimes-island anymore. Building the causeway and a nearby dam to reclaim some land has caused the sand, which used to be washed away by the tides on a regular basis, to build up, and Mont Saint-Michel is now only a proper island during the very highest of tides. 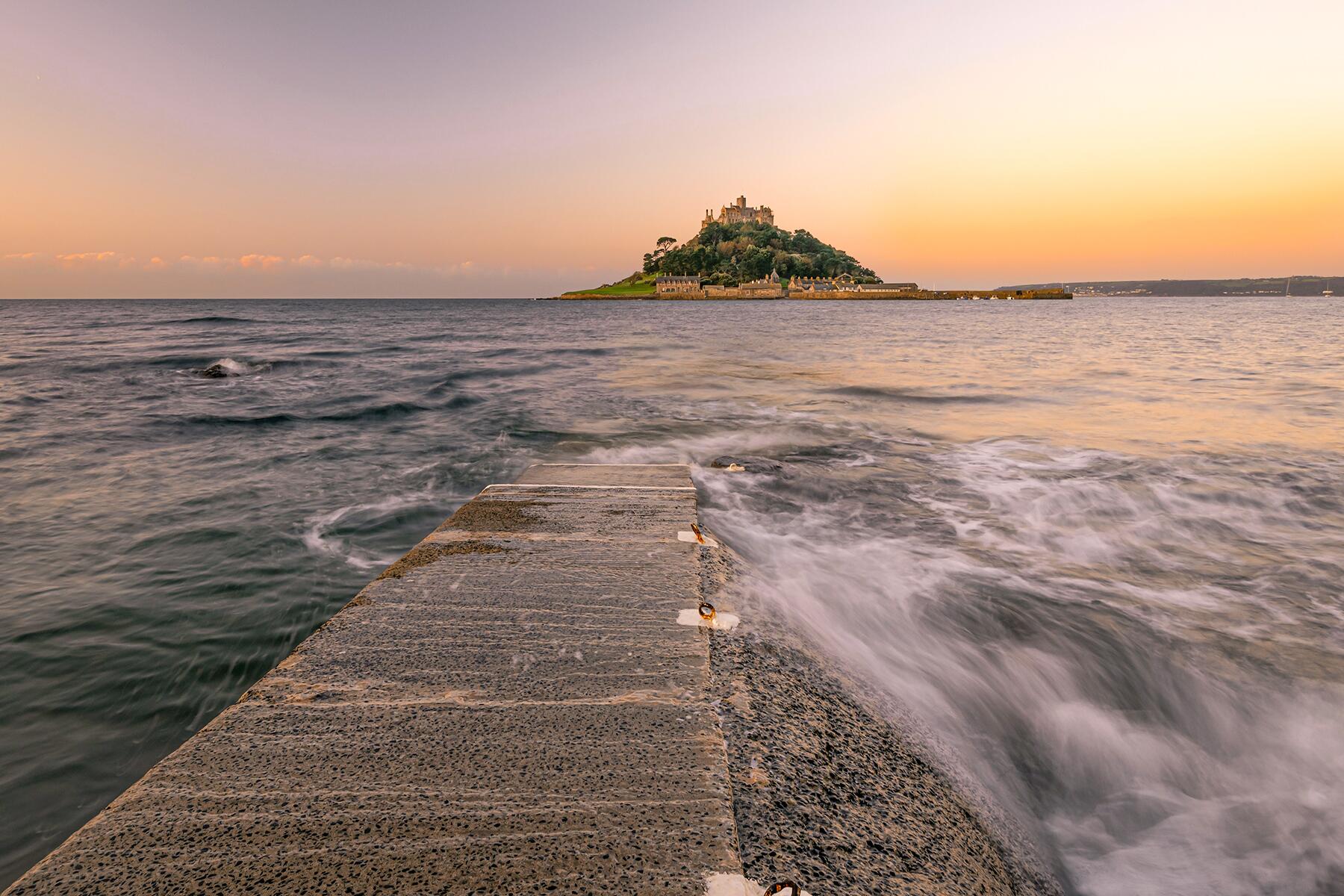 Saint Michael’s Mount is located on the southern coast of Cornwall, practically opposite its twin Mont Saint-Michel across the English Channel, and as such is subject to similar tides. Gifted to the Benedictine order by Edward the Confessor in the 8th century, it is connected to the mainland by a half-mile-long man-made granite block causeway. Despite the causeway, the island is only accessible on foot during low and mid-high tide. Instead of a monastery, a medieval castle now sits on the island’s highest point, and a quaint harbor hemmed with pubs and shops welcomes visitors. 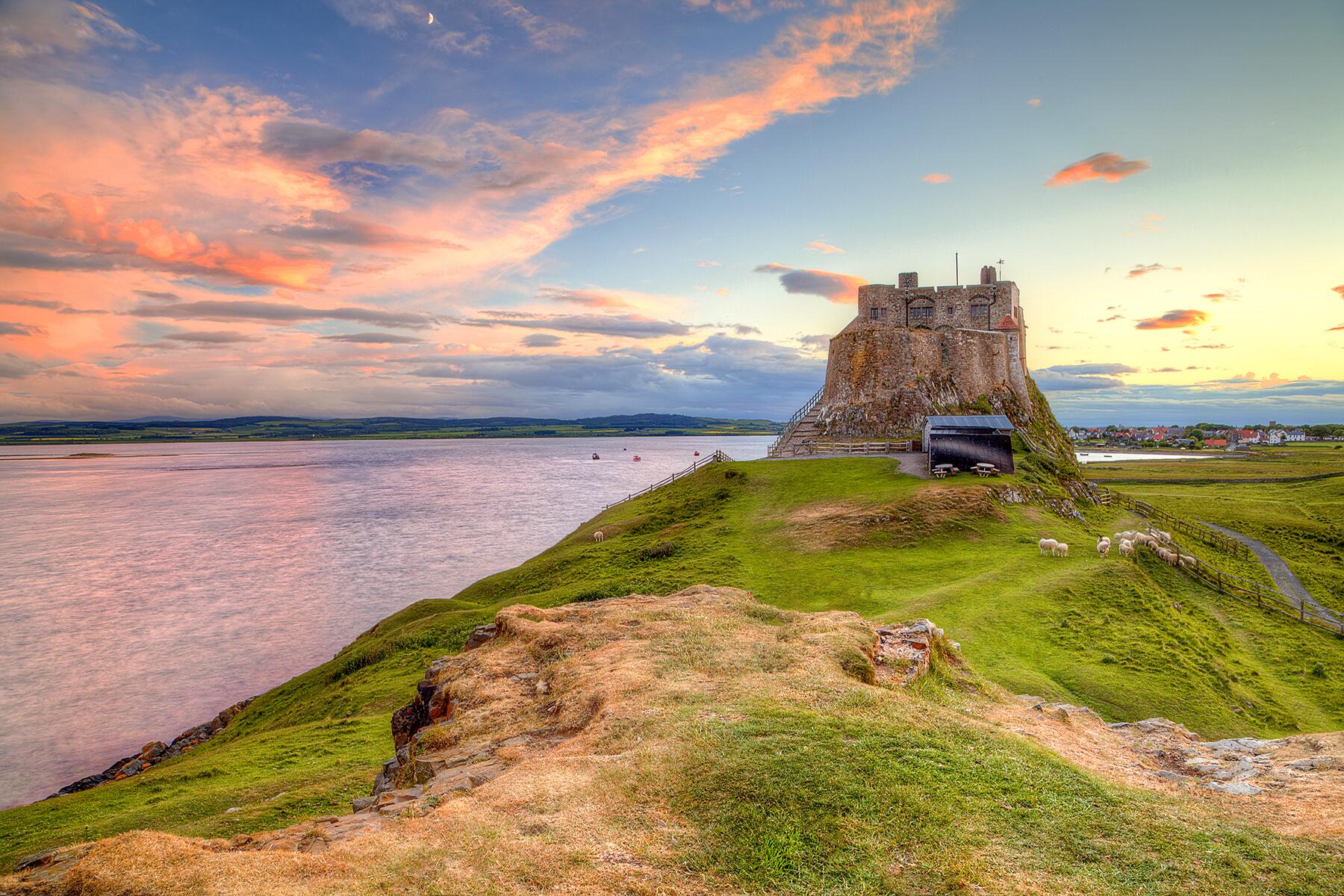 The Holy Island of Lindisfarne, known as either Holy Island, or Lindisfarne, was first settled in 635 A.D. by Saint Aidan, and is one of the most important centers of early English Christianity. Located off the magnificent Northumberland coast in the northeast of England close to the Scottish border, the island has an ancient (and ruined) monastery and a castle, joined by a lovely path through bucolic fields along the shoreline. Some 180 people live in the small village on the island, and daily tidal reports give the times when it’s safe to cross the causeway, which helps keep the community connected with the mainland. Wildlife enthusiasts can spot a wide variety of birds and even some seals living around the island. 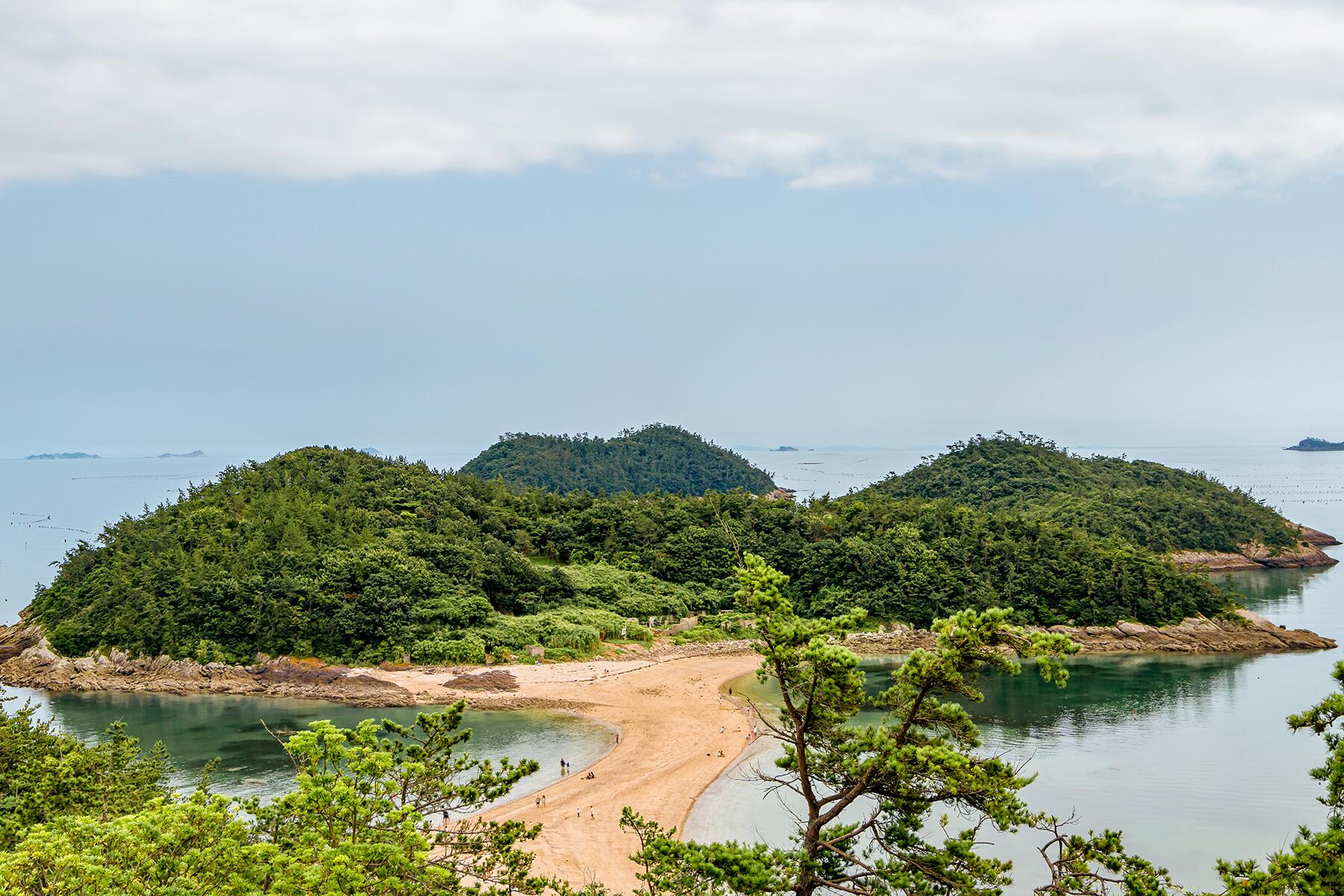 Jindo Island is the third-largest island of South Korea and is more an island than a sometimes-island: the 1.8-mile long, 130-foot wide causeway only opens twice a year for about an hour at extreme low tide, and connects it with its smaller neighboring island, Modo. As the legend goes, a woman being chased by tigers prayed for the sea to allow her to escape to Modo Island, and just like that it happened. This rare “magical” parting of the seas attracts hundreds of thousands of visitors who fill the path, forming a veritable human bridge between the two islands. 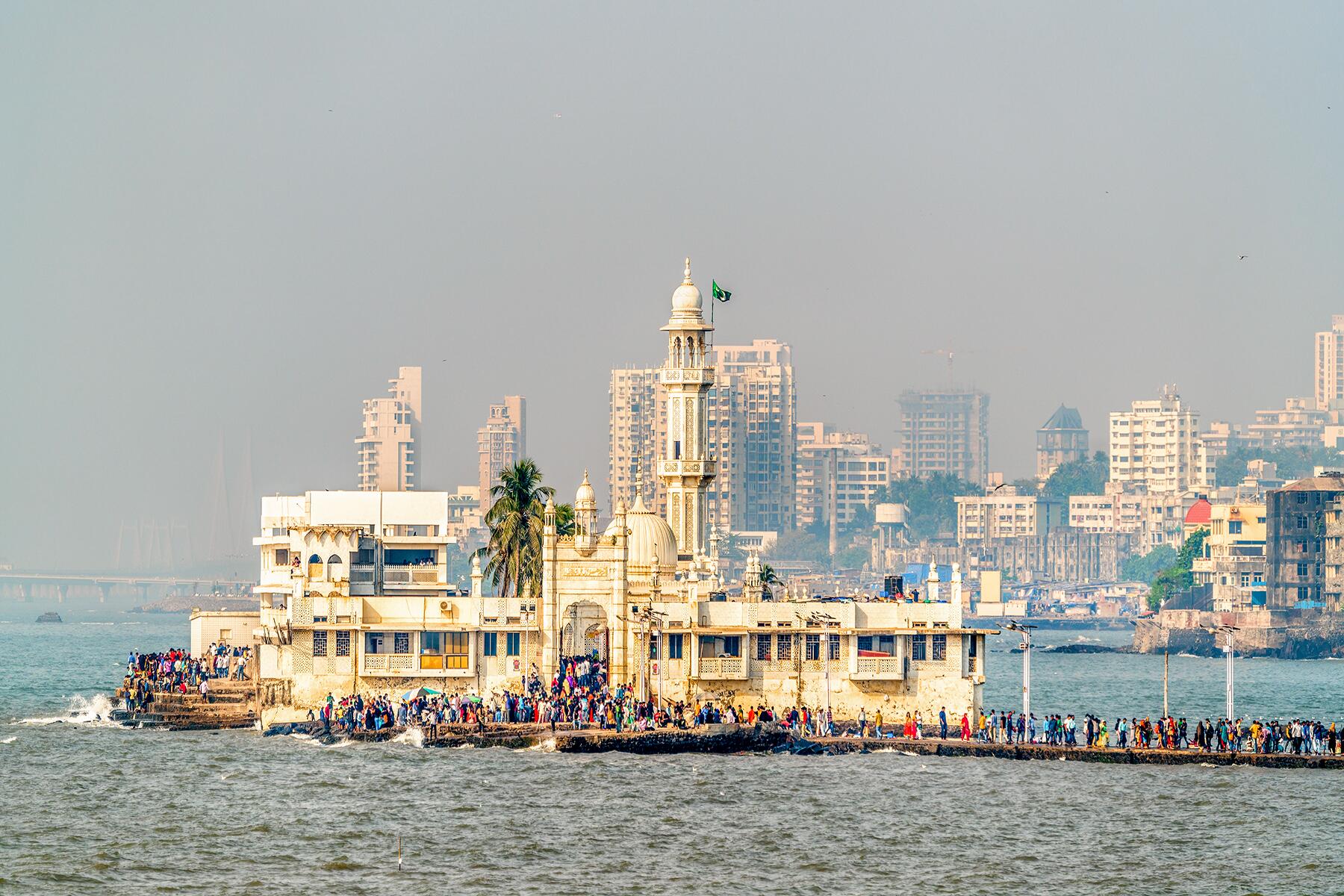 Many of these sometimes-islands are also places of pilgrimage or worship. The Haji Ali Dargah islet is no exception. The tidal mosque off the coast of Mumbai floats in the bay like a white mirage and is a site of worship for many religions and creeds. The mosque, built in the 19th century, holds the tomb of Saint Pir Haji Ali Shah Bukhari, whose casket, according to legend, floated back to this spot after he died on a pilgrimage to Mecca. 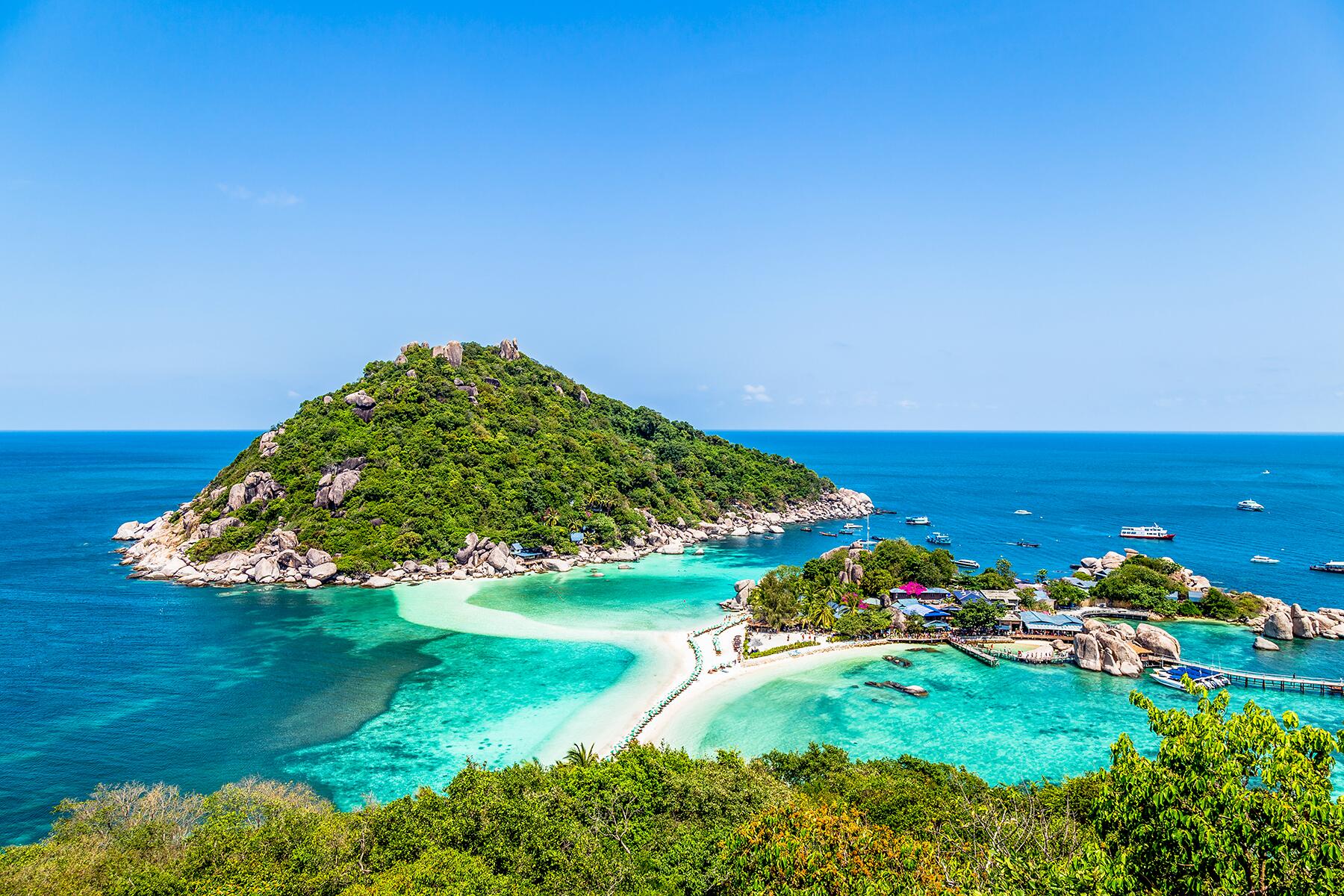 Off the island of Koh Tao, off the eastern coast of Thailand, lie three tiny islets all lumped together known as Koh Nan Yuan that are connected by dreamy strips of white sand. The beaches and the islands are well known as ideal spots for swimming, snorkeling, and all kinds of other water sports. Koh Nan Yuan is a tiny island off the main island, with its beach submerged during high tide. It’s a private island, with a fee for entering, but once there, you’ll find the Nangyuan Dive Resort where you can stay overnight, making the prospect of getting stranded on the island not so bad. 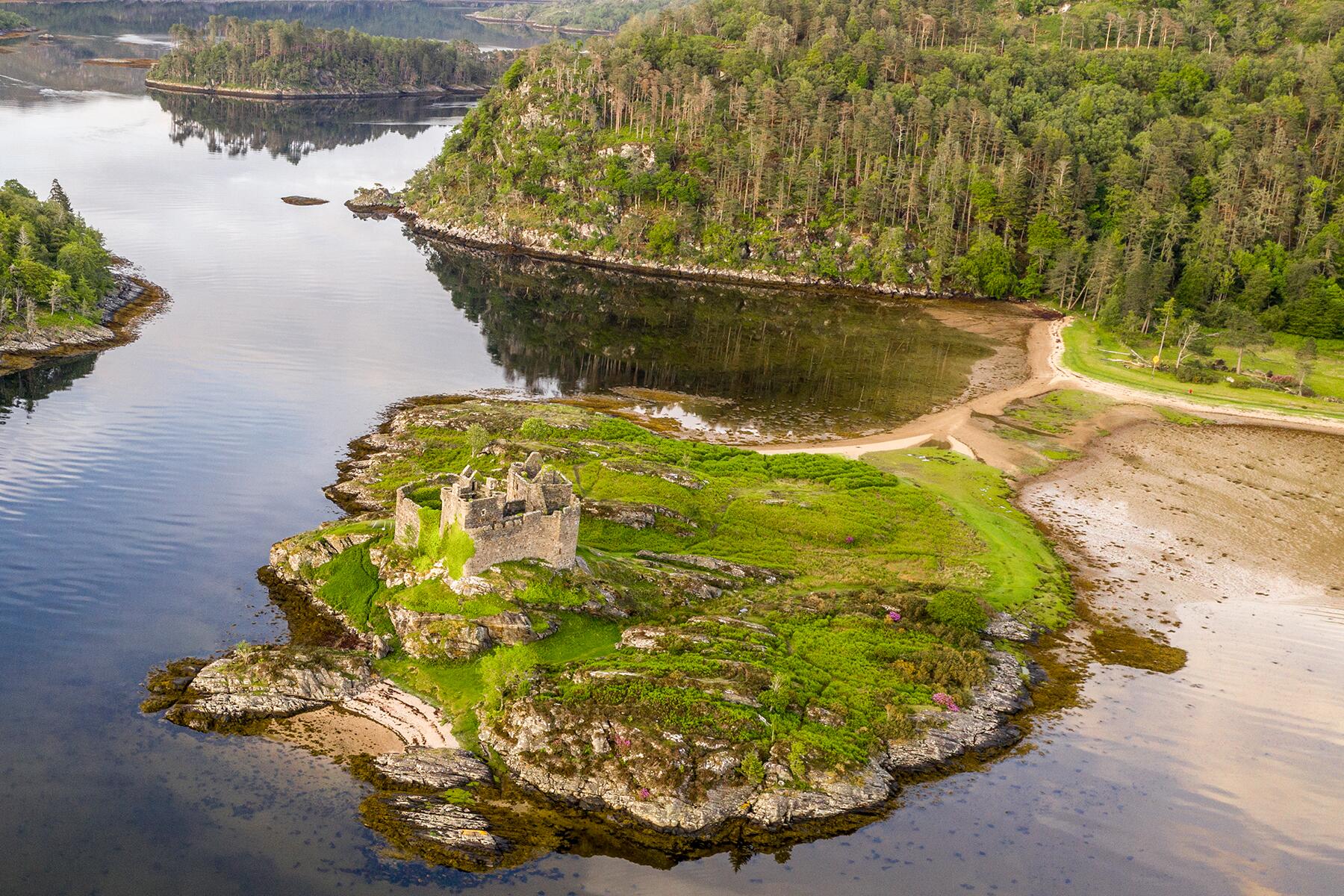 While there are more than 1,500 castles dotted throughout Scotland, in various states of disrepair, this one is special because while it’s a ruin, it still sits imposingly on the tidal island of Eilean Tioram. Built in the mid-13th century, the castle belonged to the clan of the MacDonalds. Castle Tioram was built in the strategic location at the confluence of Loch Moidart and the River Shiel, occupying a position that allowed it to control access to the Loch. By the way, should you need to ask for directions, Castle Tioram is pronounced “Cheerum.” 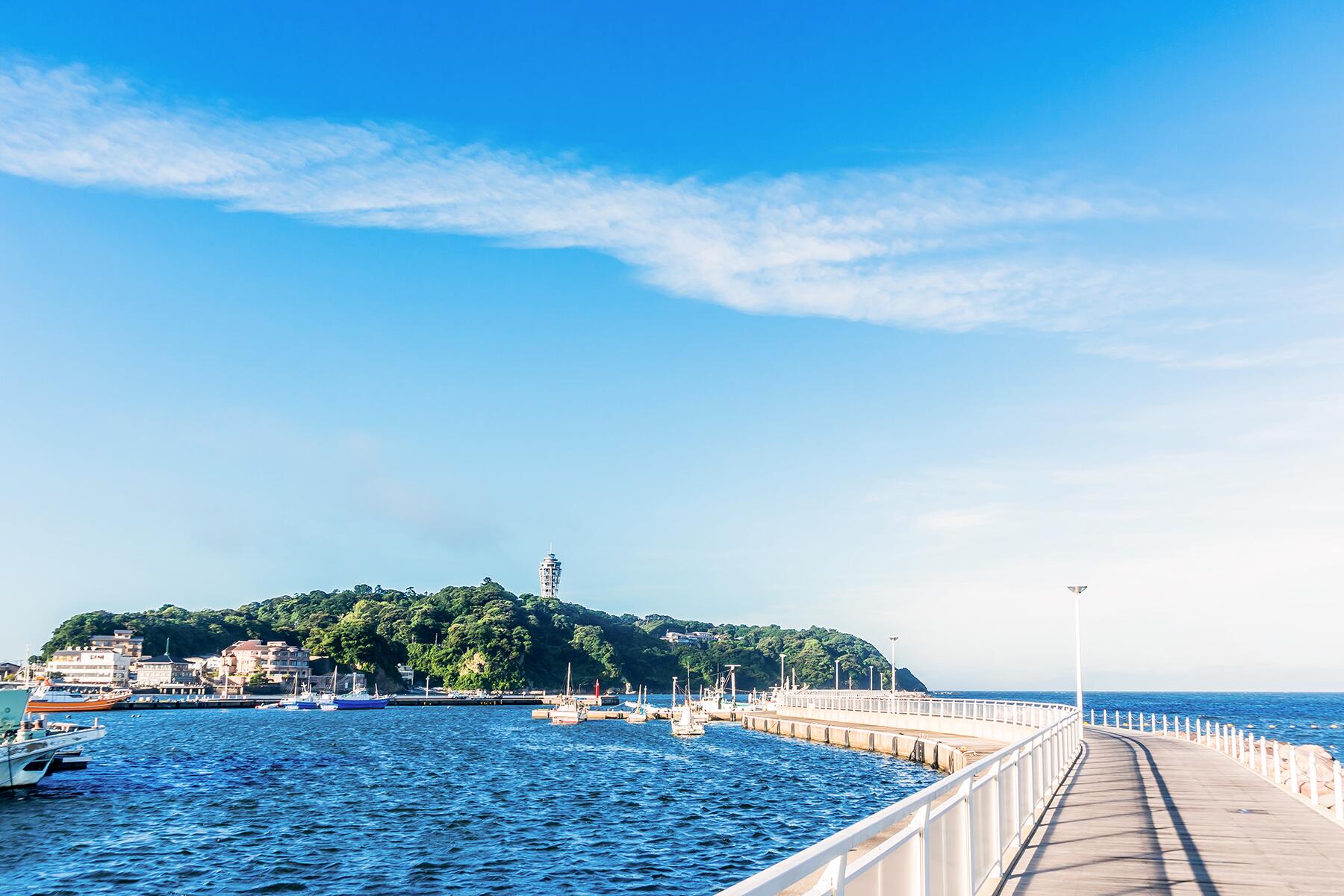 Enochima is both a seaside town near Tokyo and a once tidal island off the coast. The island has long been a popular attraction to visit from Tokyo, and people used to walk across the causeway at low tide to visit the caves, religious shrines, and tea houses, and to enjoy a view of Mount Fuji on a clear day. In 1891 the first wooden bridge was built, followed in 1964 by a road bridge. Today, some of the attractions have been upgraded, with elevators available to get to the lofty top of the island, and spas for pampering breaks. 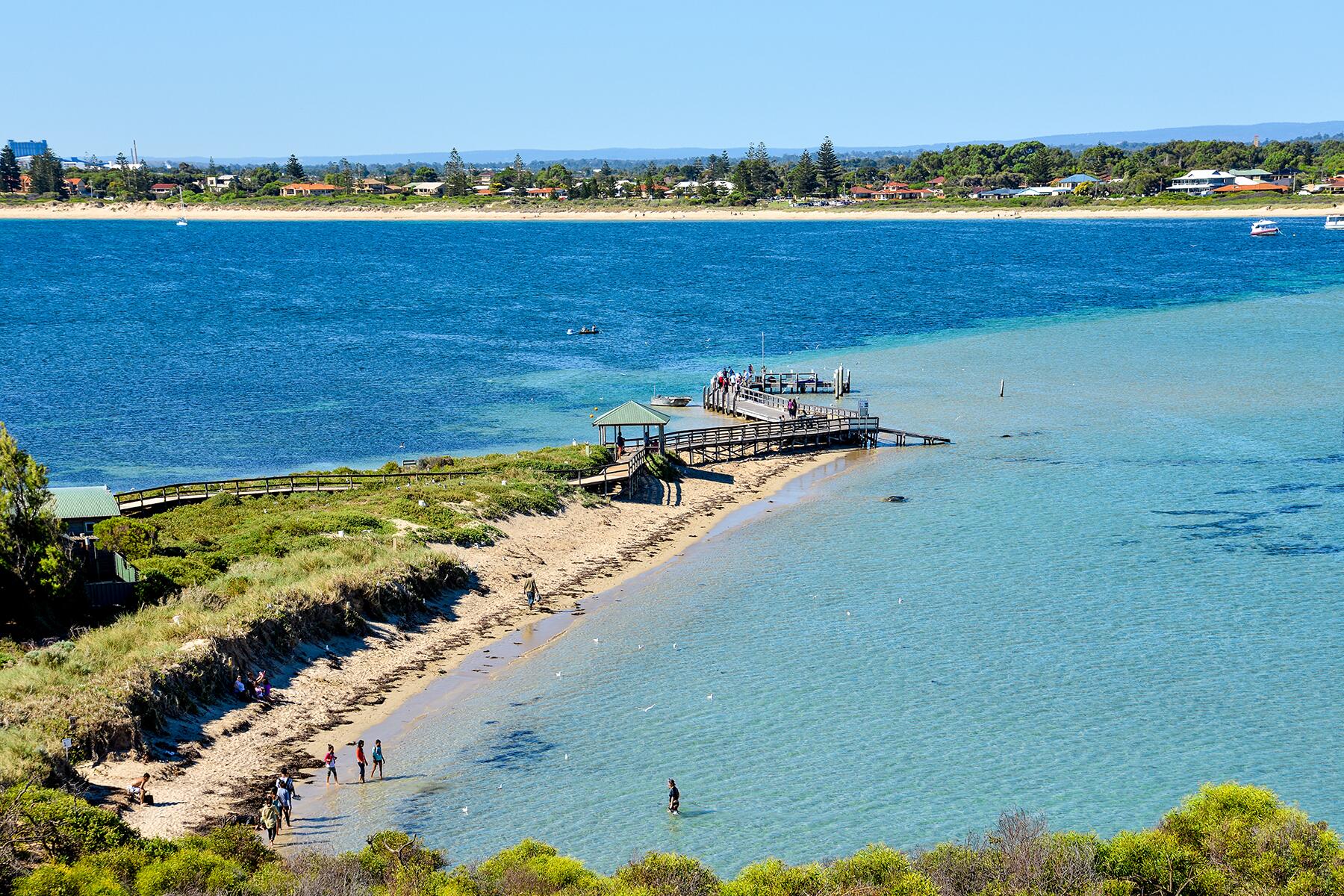 Some 30 minutes drive south of the western Australian city of Perth, you’ll find Penguin Island, home to a colony of fairy (also called little) penguins. Connected to Shoalwater Bay via a sandbank, there is also a ferry that’ll take you across in five minutes. The island is a haven for wildlife, with not only penguins, but the waters surrounding the island teeming with dolphins and sea lions, making for great diving and wildlife-spotting activities. FYI the island is closed to visitors during penguin breeding season. 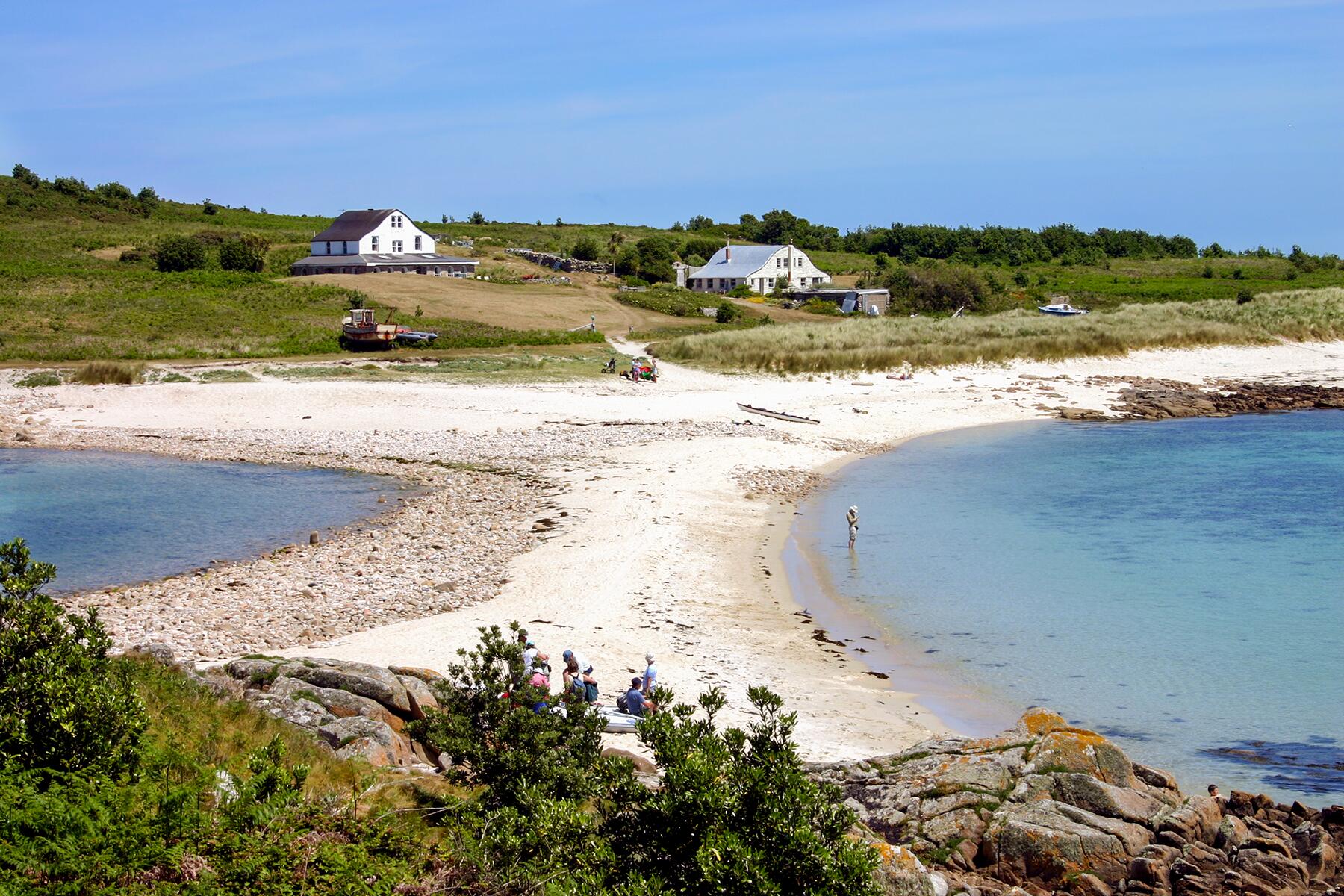 Gugh is part of the Isles of Scilly, located 28 miles southwest of the Land’s End in the county of Cornwall in England. Gugh is often included in the island of St. Agnes, because it’s connected to the larger island by a sand strip called a “tombolo,” visible only during low tide. A tiny island that’s 0.62 miles long and 0.31 miles wide, it’s known and visited mostly for the Bronze Age nine-foot-tall menhir, or standing stone, called locally The Old Man of Gugh. Gugh is counted as one of the inhabited islands of the Isles of Scilly, but in reality, there are only two actual houses. 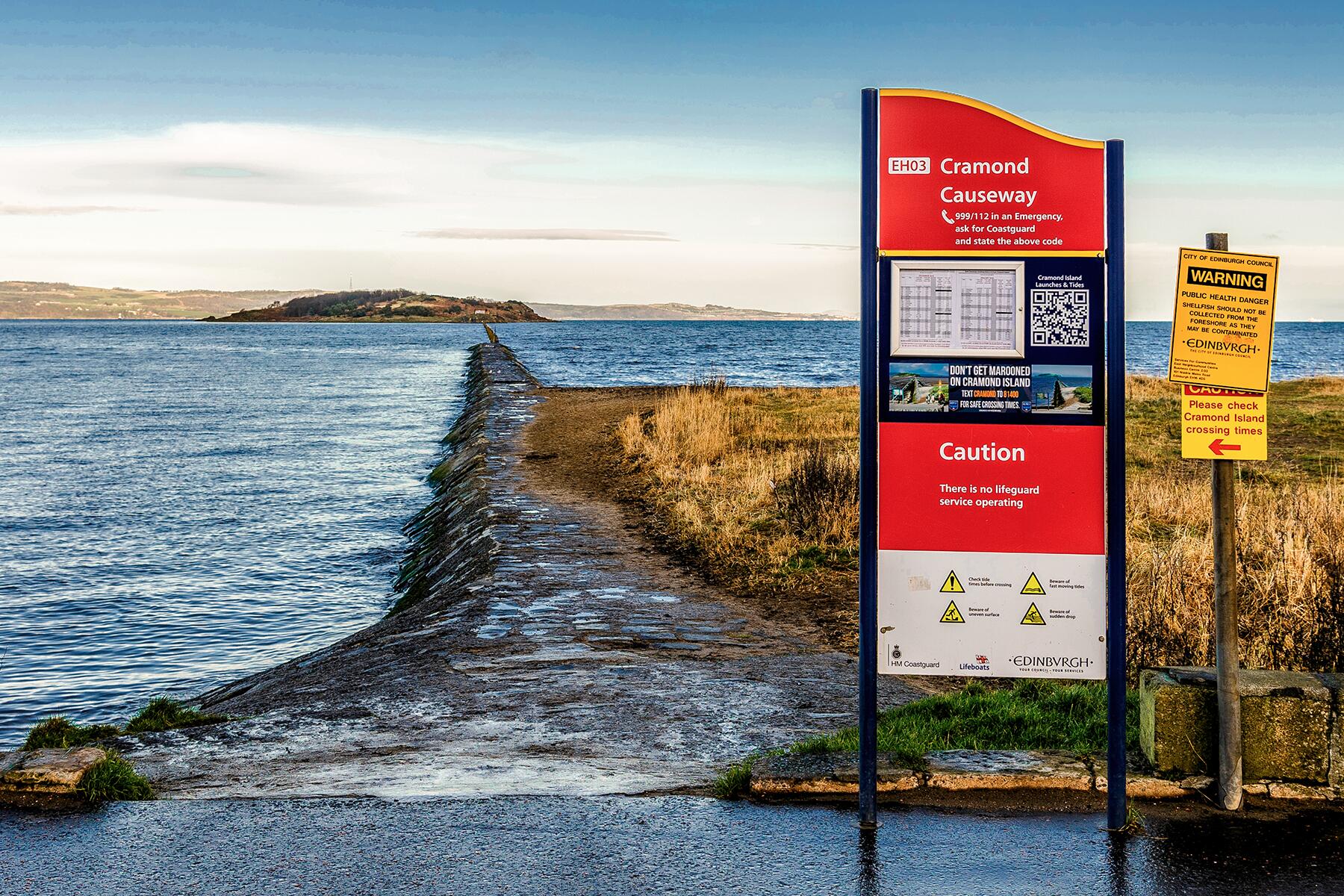 Located in the Firth of Forth off Edinburgh’s coastline, Crammond Island is connected to the mainland by a one-mile-long causeway, walkable at low tide. The local tide comes in at such speed, that despite many warning signs, people have become stranded on the island. While pretty with great views, there is not much there except some World War I gun placements to keep you busy until the next low tide. Still, the island does offer a popular and easy escape from city life in Edinburgh, with plenty of birdlife to see. 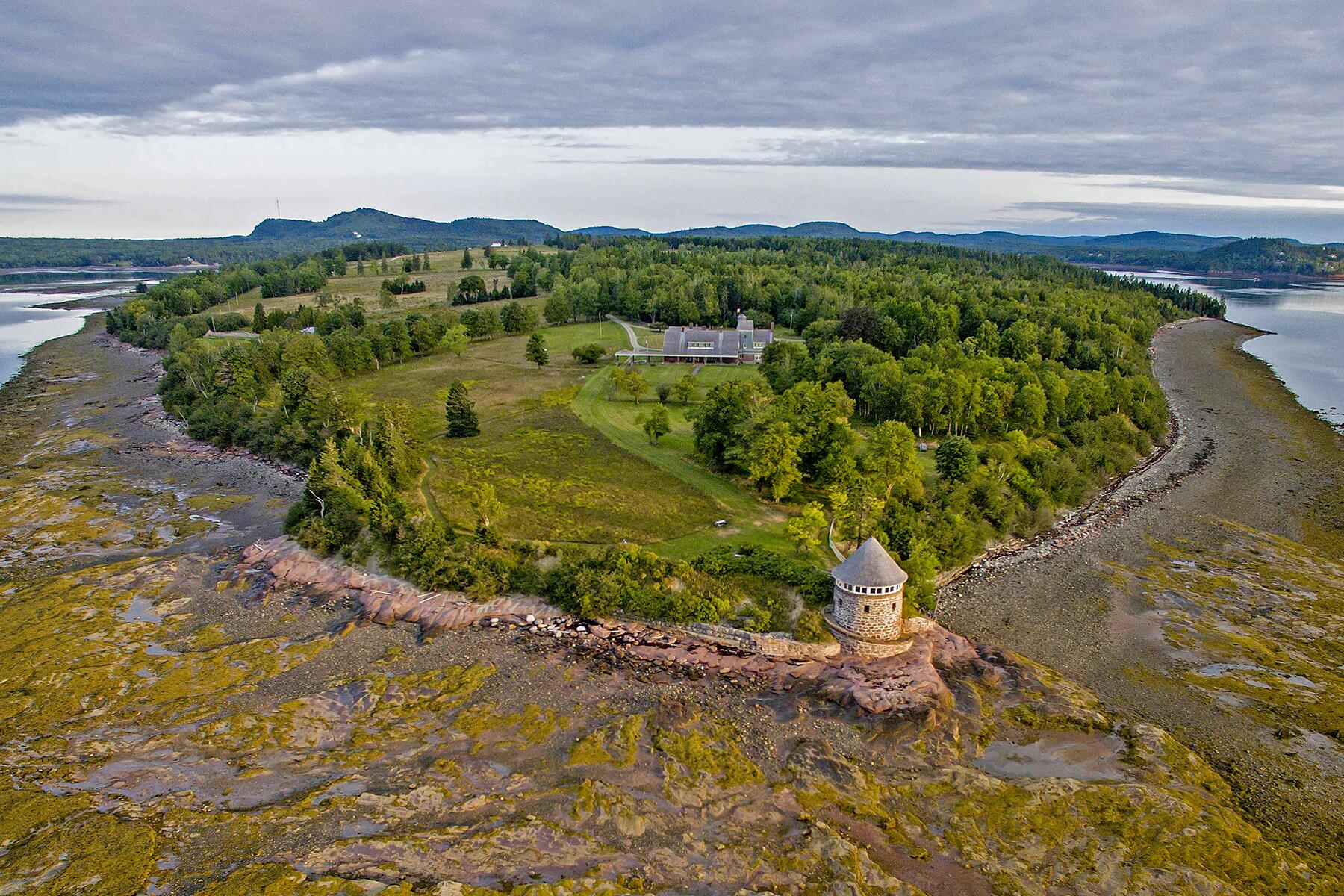 Hidden in Passamaquoddy Bay in the Bay of Fundy in New Brunswick, close to the town of St. Andrews, Ministers Island is quite unique in that it is connected to the mainland not by a fragile sand bar, but a gravel strait strong enough to allow vehicles to pass across at low tide. Evidence has been found of a Passamaquoddy settlement dating back several thousands of years, but more recently, it because famous as the summer retreat of Sir William Van Horne, the president of the Canadian Pacific Railway in the late 1800s. Today the 500-acre wild island is perfect for hiking, biking, and spotting wildlife.

A bit farther south there lies East Quoddy Lighthouse on a small tidal island, with the claim to fame of being one of the loveliest and as such most photographed lighthouses along the coast. 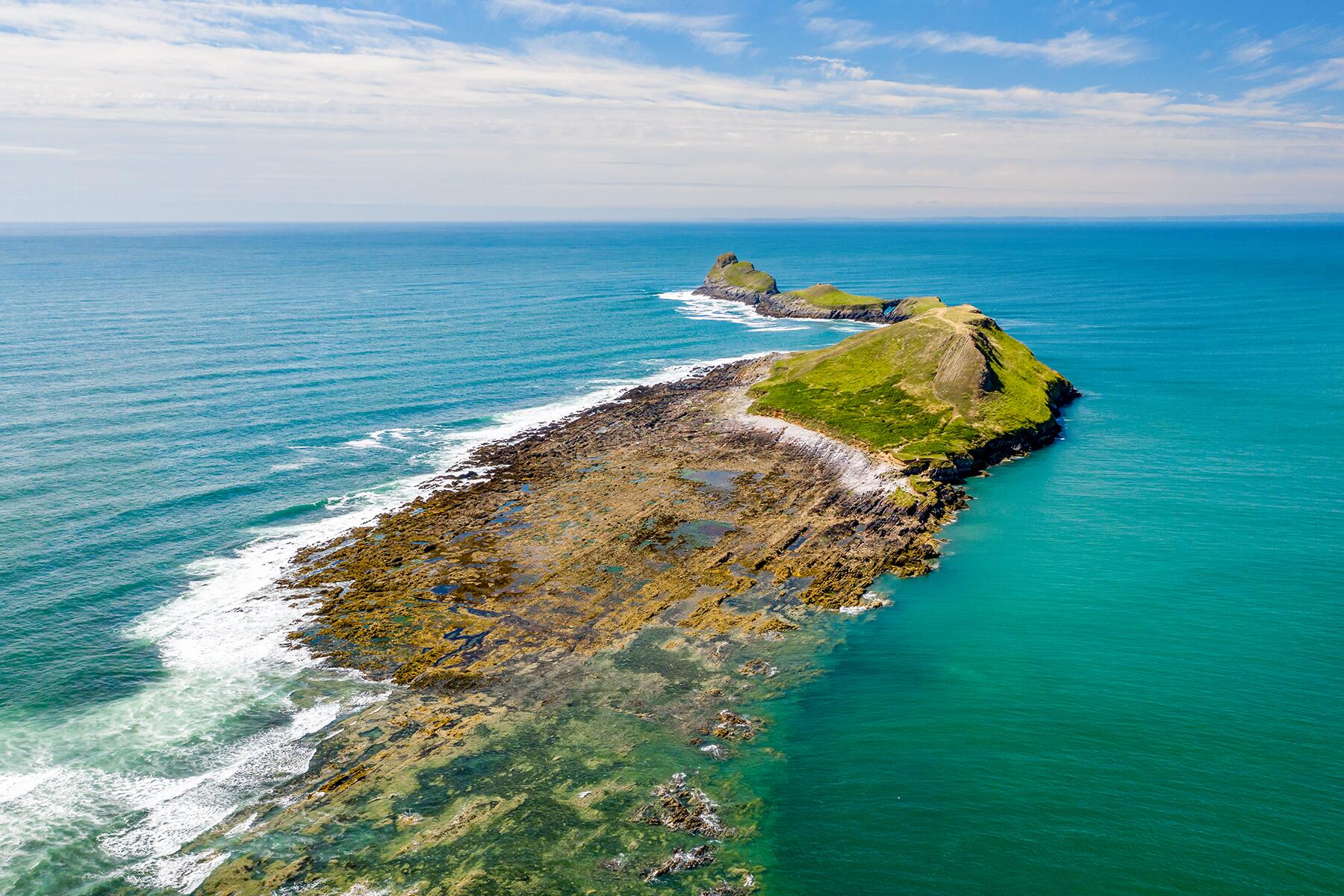 Looking like a partly submerged winged beast, it’s not surprising that the name for the island Worm’s Head was derived from an Old English word for “dragon.” Off the Gower Peninsula near the Welsh city of Swansea, this tidal island was described by the poet Dylan Thomas as “the very promontory of depression” because, reportedly, he was once forced to spend the night on the island after missing the window to retreat via the causeway. The causeway itself is a rocky outcrop, with a section called Devil’s Bridge, making it more of an adventure than a walk to reach the lovely, if rocky, island. 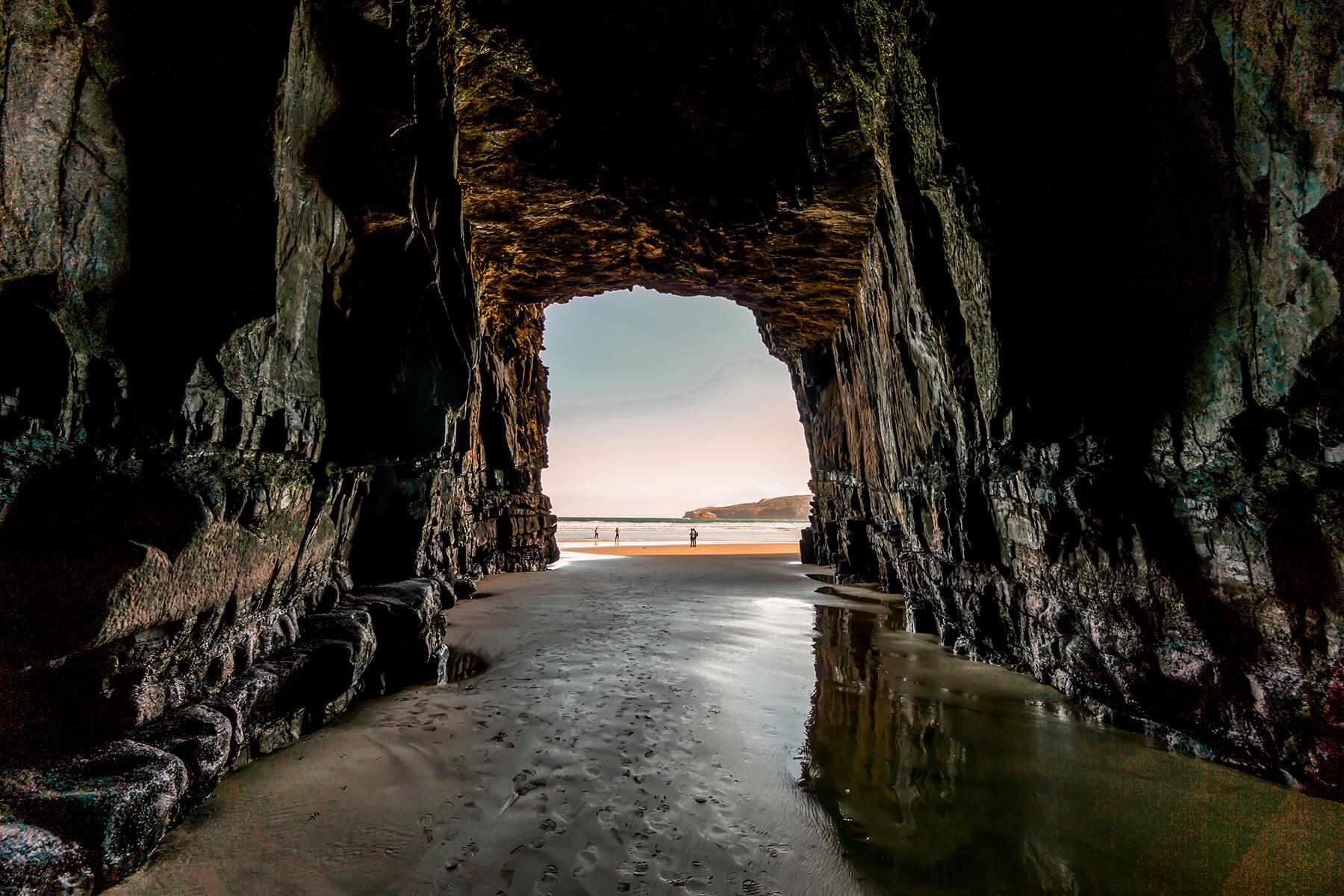 WHERE: The Kaitlins, New Zealand

Curio Bay, a tidal sometimes-island off the remote southern coast of South Island in New Zealand deserves its name not just for its outstanding beauty and grand views, but also because it is home to a petrified forest from the Jurassic Period, i.e., some 180 million years old. It’s also home to a colony of the rare yellow-eyed penguin. There is a designated walkway for you to experience both, at low tide. Not far, just around the headland, you’ll find Porpoise Bay, which is not only beautiful but, you guessed it, famous for its dolphin-watching.