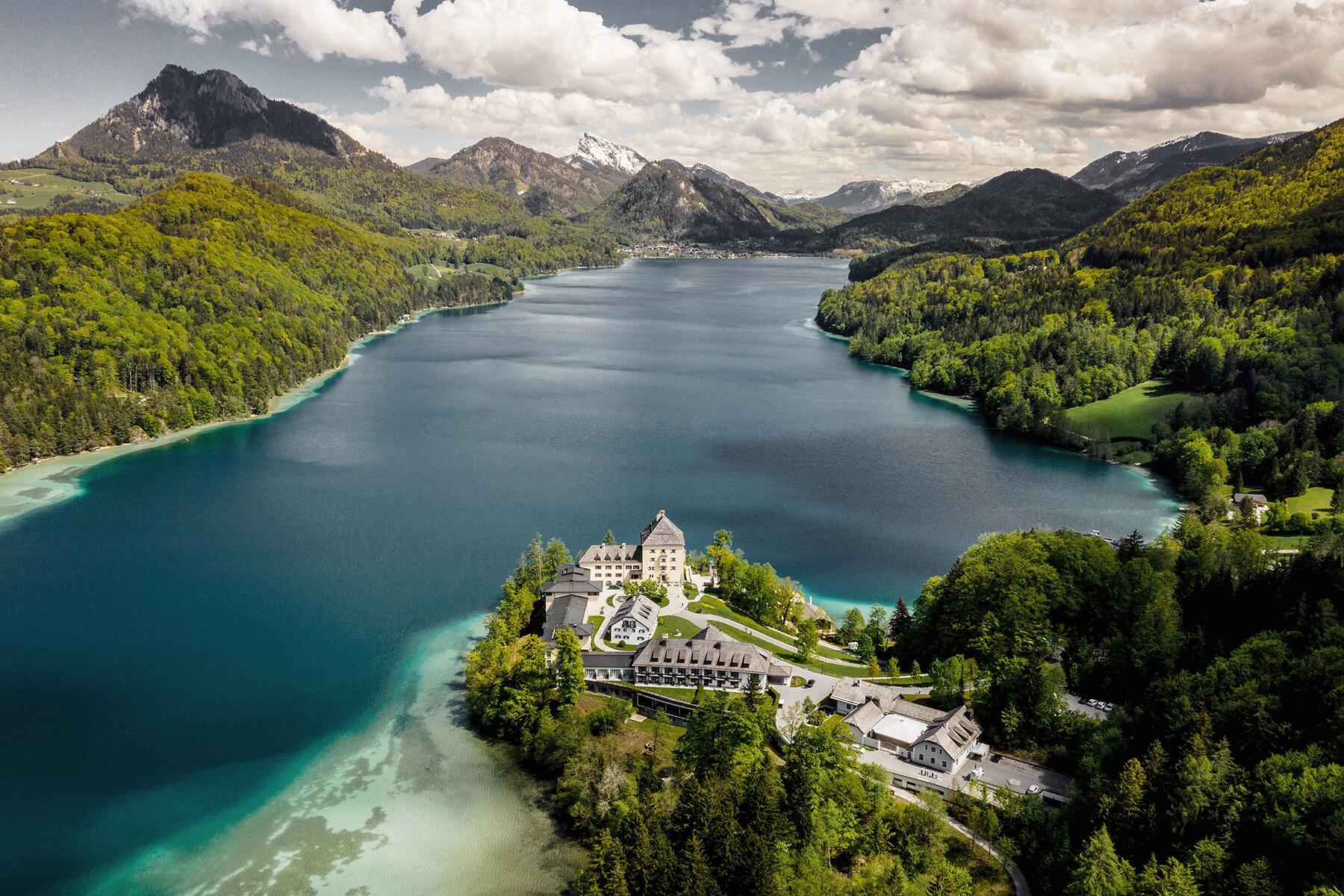 Climbing a spiral staircase to survey your own kingdom from ancient battlements sounds like the stuff of fairy tales. But this fantasy doesn’t have to be make-believe. Architectural restoration charity The Landmark Trust saves endangered historic buildings across the British Isles and sensitively converts them into vacation rentals.

Among them are many towers, built as far back as the 16th century, with knockout views and fascinating former lives as royal picnic spots, wartime lookouts, and more.

You’ll need to book well ahead to bag one of these unique properties, which generally sleep two to four people. You’ll find the best values during the middle of the week or just after a UK public holiday. Look out for open days when you can rock up at certain landmarks for a free snoop around, as well.

Political scandals are nothing new. The Member of Parliament who originally owned 18th century Luttrell’s Tower was reputed to have a shady sideline as a smuggler, aided by a secret tunnel that can still be used to access the nearby beach.

Queen Victoria visited the folly as a teen and it was rented for a while by radio pioneer Guglielmo Marconi, whose family stood on the roof to wave as the Titanic passed on its ill-fated maiden voyage. The waters of The Solent below are a sailing hotspot and you too can look out for ships and yachts from the rooftop or the comfy lounge with its decorative fireplace. Nearby, seek out cozy pubs and wild ponies in the New Forest, climb aboard historic vessels at Portsmouth, then head back to sleep in Marconi’s former lab in the top of the tower.

The Battle of Culloden, fought in the Scottish Highlands in 1746, proved the fatal blow to the Jacobite Uprising that laid claim to the British throne. Ornate Culloden Tower, a mash-up of Classical and Gothic styles, was built in Yorkshire the same year to serve as a smug monument to the victorious side.

Fast-forward to the 1980s and it was in a sorry state with the bottom level used as a cattle shed. Now, thanks to the Landmark Trust, the highlight is an octagonal lounge that sits under a reconstructed ceiling of elaborate plasterwork. The tower is set in the picturesque Yorkshire Dales, the landscape that inspired the Brontë sisters, and you can day-trip to the parsonage where they penned Wuthering Heights, Jane Eyre, and more. The quaint city of York is an hour’s drive away.

This lofty beauty was one of the most challenging restorations for the Landmark Trust as it had to be moved a few hundred feet back from the crumbling cliff edge. Clavell Tower was built in 1830 to serve as a retired reverend’s observatory and today you can use the wraparound balcony off the bedroom for your own spot of stargazing. The four cozy rooms together make a kind of vertical cottage and are linked by way of a curving wooden staircase.

Sailors and smugglers used this local landmark for navigation in the days before GPS and Thomas Hardy of Tess of the d’Urbervilles fame sketched it to illustrate his Wessex Poems. It sits right on the South West Coast Path walking route in a region known for its fossil finds.

This most ornate of locker rooms, set in private parkland, was used by the fourth Lord Harris, one of the founding fathers of the sport of cricket. While sweaty socks may have been peeled off in the bottom of the Prospect Tower, in an era long before drones, the top floor and roof were used to enjoy aerial views of the cricket pitch that Harris had built below. Today you can sleep and shower in the base and lounge in the top where there’s also a curved galley-style kitchen with a porthole window. Stained glass adds a splash of color while antique cricket paintings give a nod to the history of this 19th-century mini-castle. You still have a grandstand view if there’s a match taking place on the historic pitch. Britain’s oldest beer brewer runs tours nearby.

One of the oldest Landmark towers, Laughton Place is all that’s left of a large moated manor house that was built in the 16th century. This lone brick turret rises over marshy land populated by sheep. You’ll still find the indentation of a moat outside and can survey your temporary kingdom from the battlements. Inside, a rope handrail will help you climb the twisting brick stairs past lattice windows with thick stone sills.

The four-sleeper tower sits in the Sussex countryside under the hills of the South Downs National Park. It’s not far from several vineyards and historic houses and the LGBTQ+ scene of the seaside city of Brighton.

For another 16th-century wonder check out the six-story Freston Tower in Suffolk.

Bored of sweaters for your birthday? Drop hints about a tower. This one was a surprise present for the 89-year-old Lord Rolle, a 19th-century landowner, who had to be carried in a chair up the 103 stone steps of the spiral staircase to enjoy the views from its roof terrace. His young wife used the folly to display her china collection, earning it the name The China Tower. Now you can hang out in the elegant octagonal sitting room, two bedrooms, and farmhouse-style kitchen with a flagstone floor. It sits alongside 64 acres of botanical gardens that the Rolles also created. Another Landmark, Peter’s Tower, can be found a few miles away right on a beach. Due to its narrowness, it is one of the cheapest to rent.

Queen Victoria’s deep mourning over the loss of her husband Prince Albert to typhoid is the stuff of Hollywood films. When her eldest son and grandson caught the same illness during a stay at Sandringham she ordered an overhaul of the waterworks at that royal estate and this 60-foot neo-Byzantine structure is the showy result. Appleton Water Tower was built merely to raise a tank high enough to provide the correct water pressure to Sandringham but, realizing this hilltop perch would also give fabulous countryside views, the architect set about incorporating an upper room fit for a queen. Victoria used it for entertaining guests at shooting parties and picnics, and you can enjoy the same views today from what is now a smart bed-sitting room, right on the grounds of this royal countryside retreat.

The Landmark Trust’s most recent restoration, completed during the pandemic, is the UK’s only surviving Semaphore Tower. It was built in 1822 in the aftermath of the Battle of Waterloo, when Britain and its allies faced France’s Napoleon Bonaparte. The five-story building was once part of a line of towers that the Royal Navy, still jittery about French attack, used to relay signals between the Portsmouth docks and London. With the electric telegraph still to be invented, this was done via masts with wooden arms positioned to indicate letters of the alphabet.

The Semaphore Tower stands in Chatley Heath nature reserve just outside London and sleeps up to four. The treetop view from the kitchen sink is a highlight but for the full 360-degree effect, you can sit out beside the mast on the roof terrace.

Tainted wealth from his dad’s Jamaican slave plantations made William Beckford one of the richest men in England back in the  19th century, but within his own lifetime, he was more controversial for his extra-marital affairs with young men. He withdrew from society and instead made daily trips from his nearby house to admire the private art collection he kept in the building below what’s now known as Beckford’s Tower. It later became a church but today it’s an apartment once more with a dramatic Scarlet Drawing Room and a spiral staircase leading to fine city views. There’s also a museum on site.

The Channel Islands, close to the coast of France, were the only part of the British Isles to become occupied by the enemy during World War II. The pretty 19th-century Nicolle Tower on the island of Jersey gained an extra level when it was requisitioned by German troops to be used as a lookout. Today, a Regency-era sitting room with ornate arched windows contrasts the simple top floor bedroom in the military extension, where you’ll still find compass marks in the ceiling and slit windows facing the sea. The views are gorgeous but it would be a crime to miss the island’s wide sandy beaches and fresh seafood.