Events Rebecca Toy I Just Partied With 51,000 People. And I Don’t Think the Kentucky Derby Will Ever Be the Same
Home  >  Events
PHOTO: Kobby Dagan/Shutterstock

From bonfires and sleigh rides in Kyiv to oranges and ostrich-feather headdresses in Belgium, here are the best places to celebrate Shrovetide.

Winter’s end is always a cause for celebration, especially in Northern and Eastern Europe, where the season is particularly lengthy, dark, and frigid. Welcoming spring during the festival of Shrovetide (as “Carnival” or “Mardi Gras” is called in the region) is a resilient tradition, fusing both pagan and Christian traditions with local legend and lore. Though many of these celebrations were discouraged—in some cases banned—by both the Catholic Church and the Soviet and Communist authorities, today they are colorful cultural milestones of the calendar year.

Here are 10 spots in Europe where these ancient traditions are particularly spectacular. 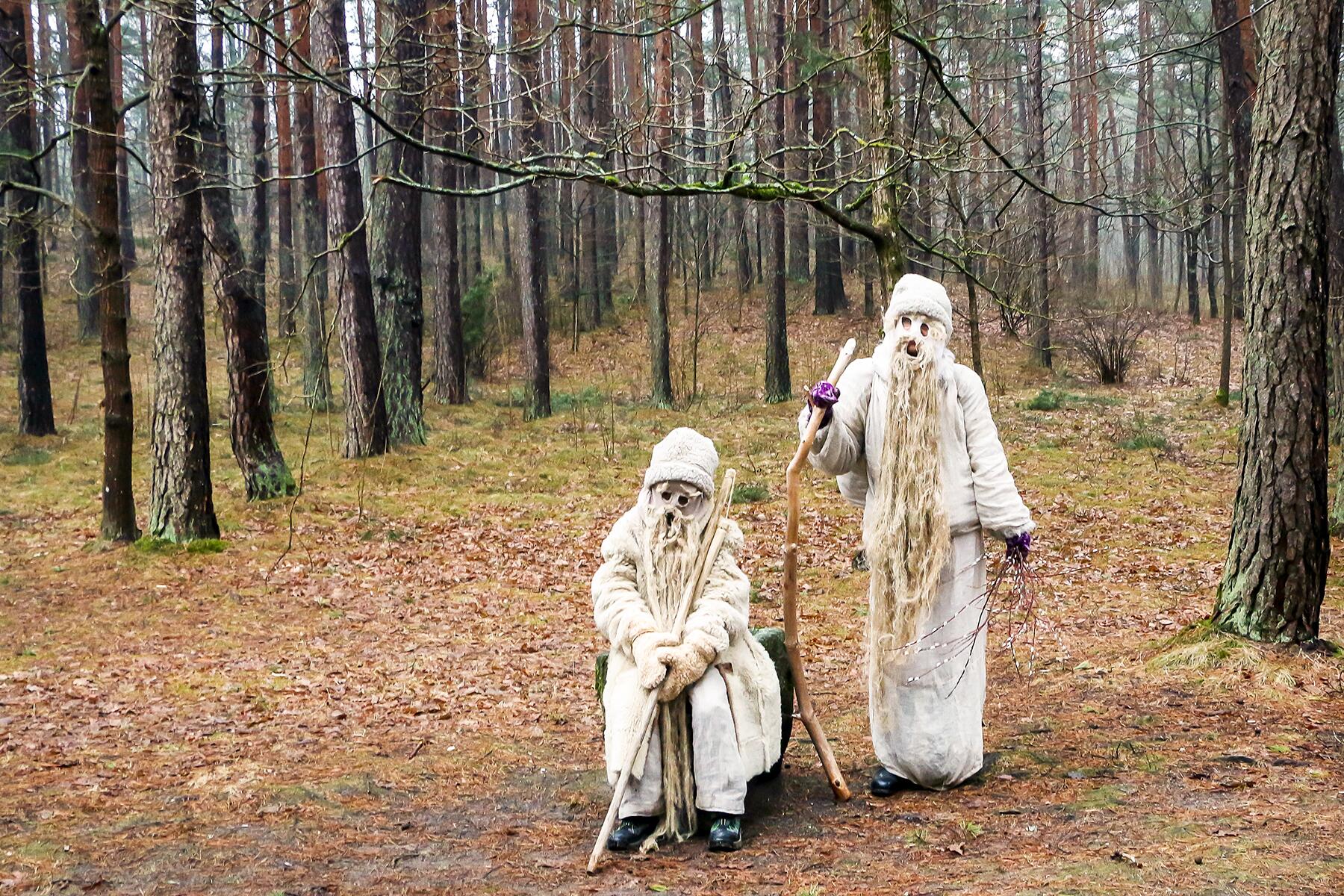 Meteni, Latvia‘s version of Shrovetide, has much in common with the tiny Baltic nation’s Slavic neighbors’ Maslenitsa: sleigh rides, traditional national costumes, and bonfires abound, but other Meteni traditions harken back to the pagan Balts’ worship of Laima, the powerful goddess of fate. Costumed mummers called ķekatas go door-to-door, offering blessings or curses, depending on the quality of largesse doled out to them. Pig roasts are a common sight, as is the ubiquitous grudemis, smoked pork boiled with barley and potatoes. Mingle with the festive crowds in Riga’s Old Town, or head to the Ethnographic Open Air Museum for an all-day party atmosphere. 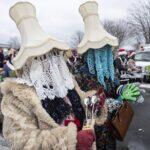 RELATED STORY
Are Mummers Allowed in? 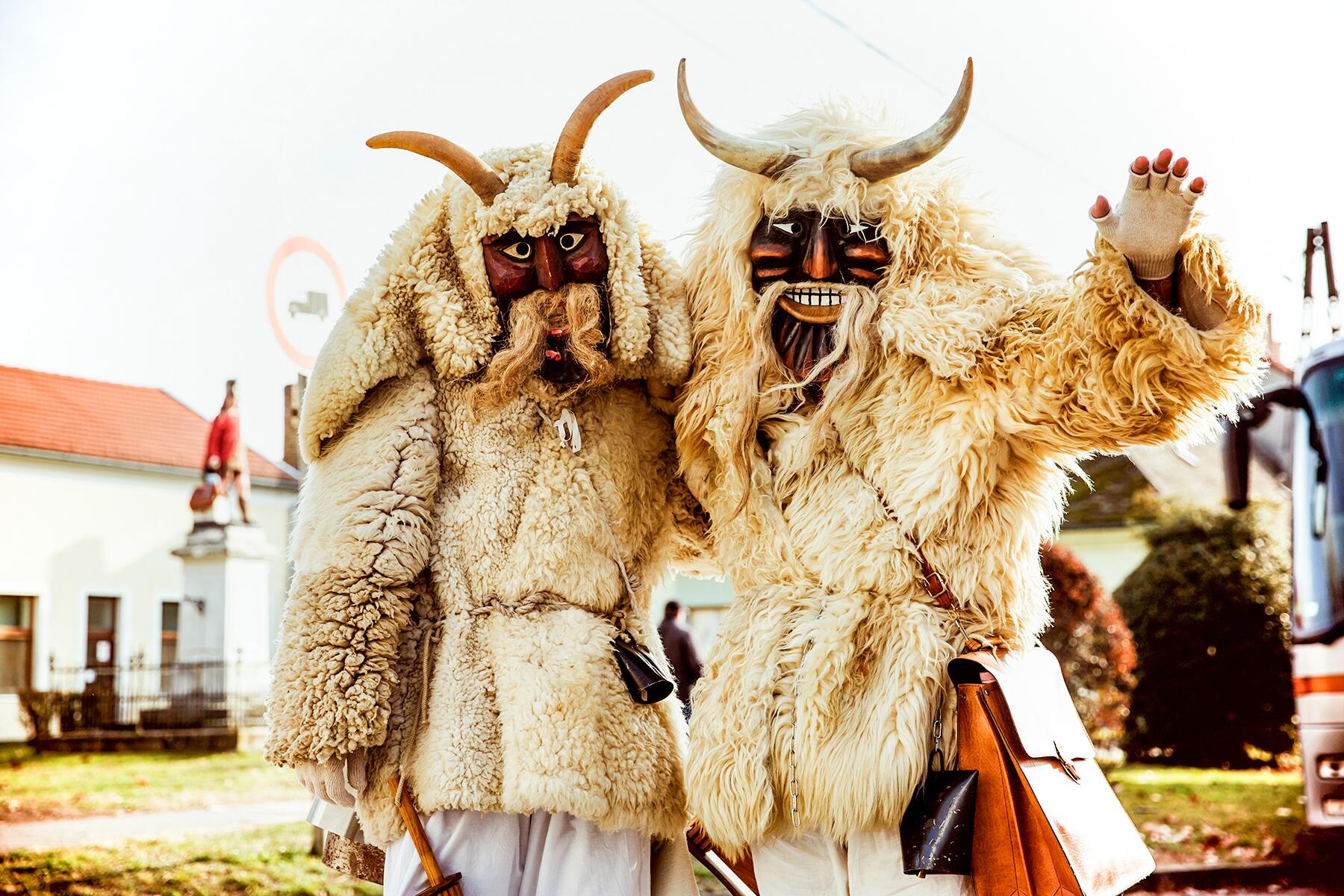 Busójaras in Mohács, Hungary commemorates a semi-mythical episode of a rare victory over the invading Ottoman Turks. Donning scary masks and making fearsome noises, the villagers managed to scare the invaders away. Today, these exquisitely carved wooden masks dyed with animal blood are the centerpiece of this vibrant five-day festival, declared a UNESCO Intangible Cultural Heritage in 2009. Masked Buso or monsters dressed in sheepskin coats march through the town with homemade floats, taunting villagers as they go. The parade culminates in a massive party with plenty of mulled wine and homemade cherry brandy. 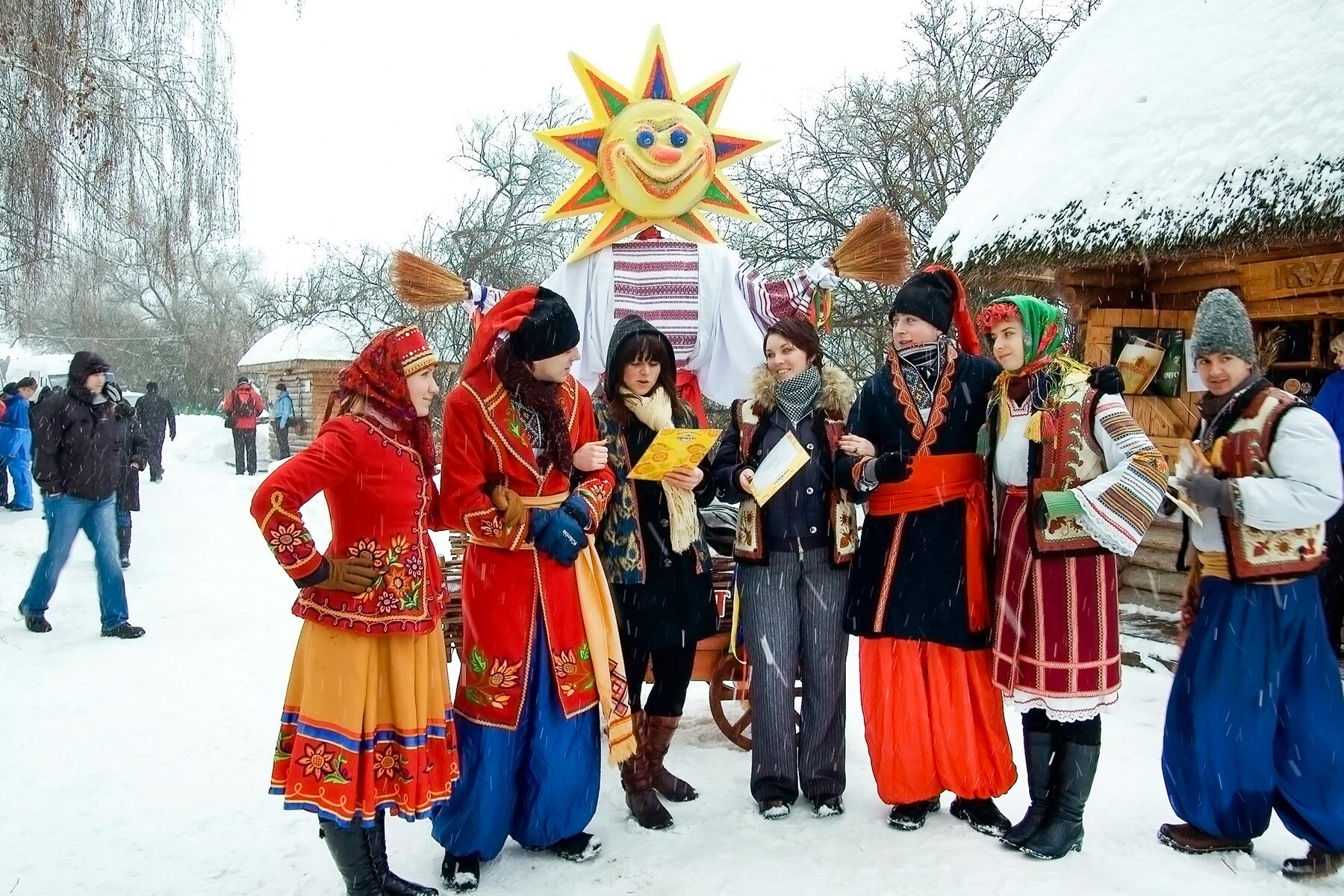 Maslenitsa in The Open-Air Museum of Memejeva

Ukraine celebrates the traditional “Butter Week” or Maslenitsa, the raucous and lively prelude to the rigorous 40-day Lenten Fast, during which for Orthodox Christians refrain from all dairy, meat, fish, fats, and alcohol. Maslenitsa traditions incorporate many aspects of the ancient pagan celebration of the spring equinox, Kolodia. These rituals were designed to coax the sun back and to make the earth fertile. The lively seven-day festival includes carousel and sleigh rides, masquerades, music, dancing, snowball fights, bonfires, and general revelry. The Open Air Museum of Memejeva in Kyiv is one of the more picturesque places to celebrate Maslenitsa amongst the traditional wooden architecture of the medieval period. 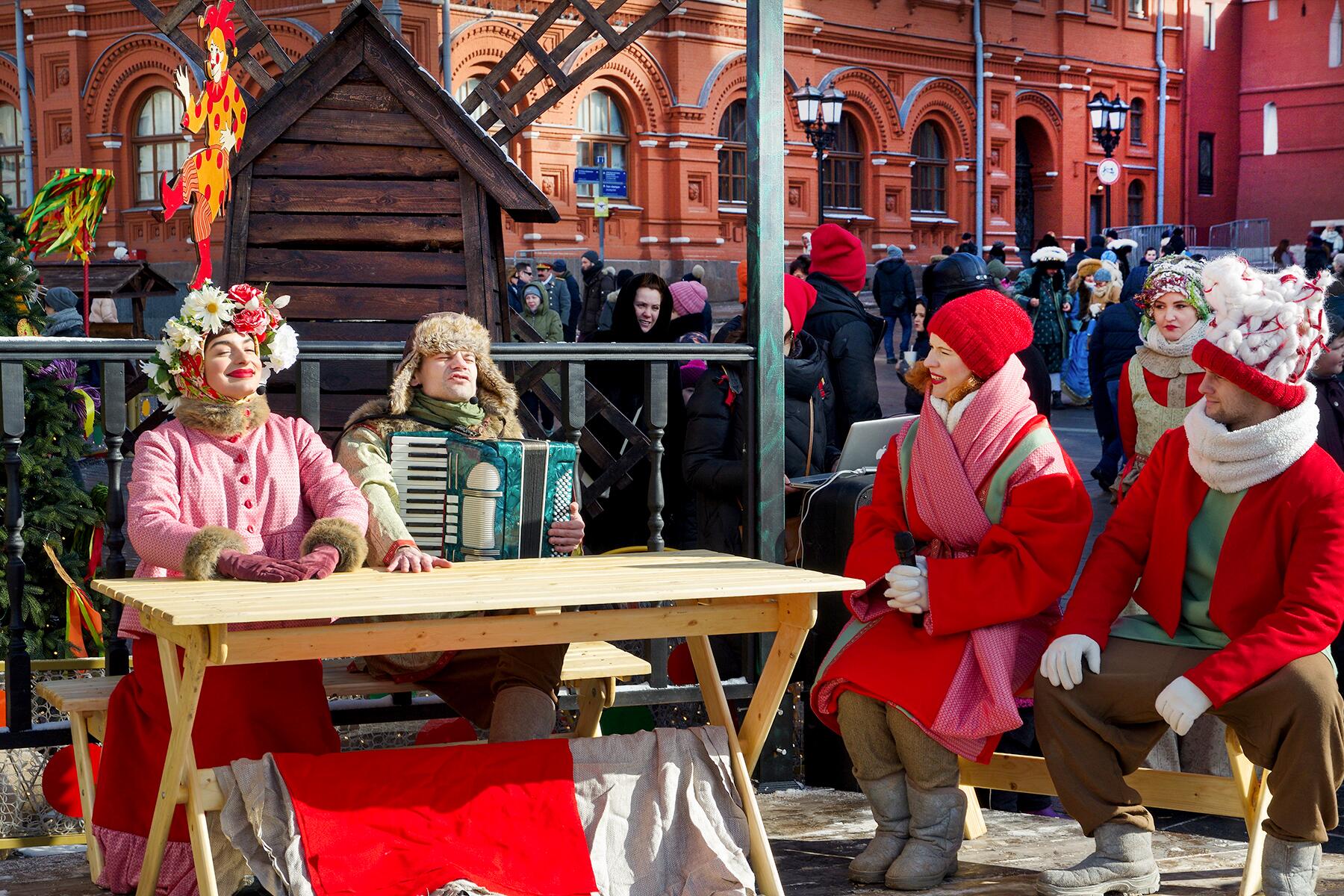 Russia throws itself into Maslenitsa with abandon! Moscow showcases Russian hospitality at its best in a week-long, city-wide party during which the main objective is to eat as many pancakes as is humanly possible. There seems to be a large griddle on every street corner, and the air is redolent with the sweet, yeasty odor of Russia’s favorite Shrovetide fare. Pancakes or blini are potent symbols of the season: round like the sun and made from the essential elements of nature: wheat, eggs, and water. Stroll through Gorky Park, Red Square, or Kolomenskoye and enjoy blini with every imaginable topping!

INSIDER TIPVisit Red Square during the week to avoid the heavily police-controlled crowds at the weekend, and choose Kolomenskoye on the weekend, when the troikas run all day and the party is in full swing. 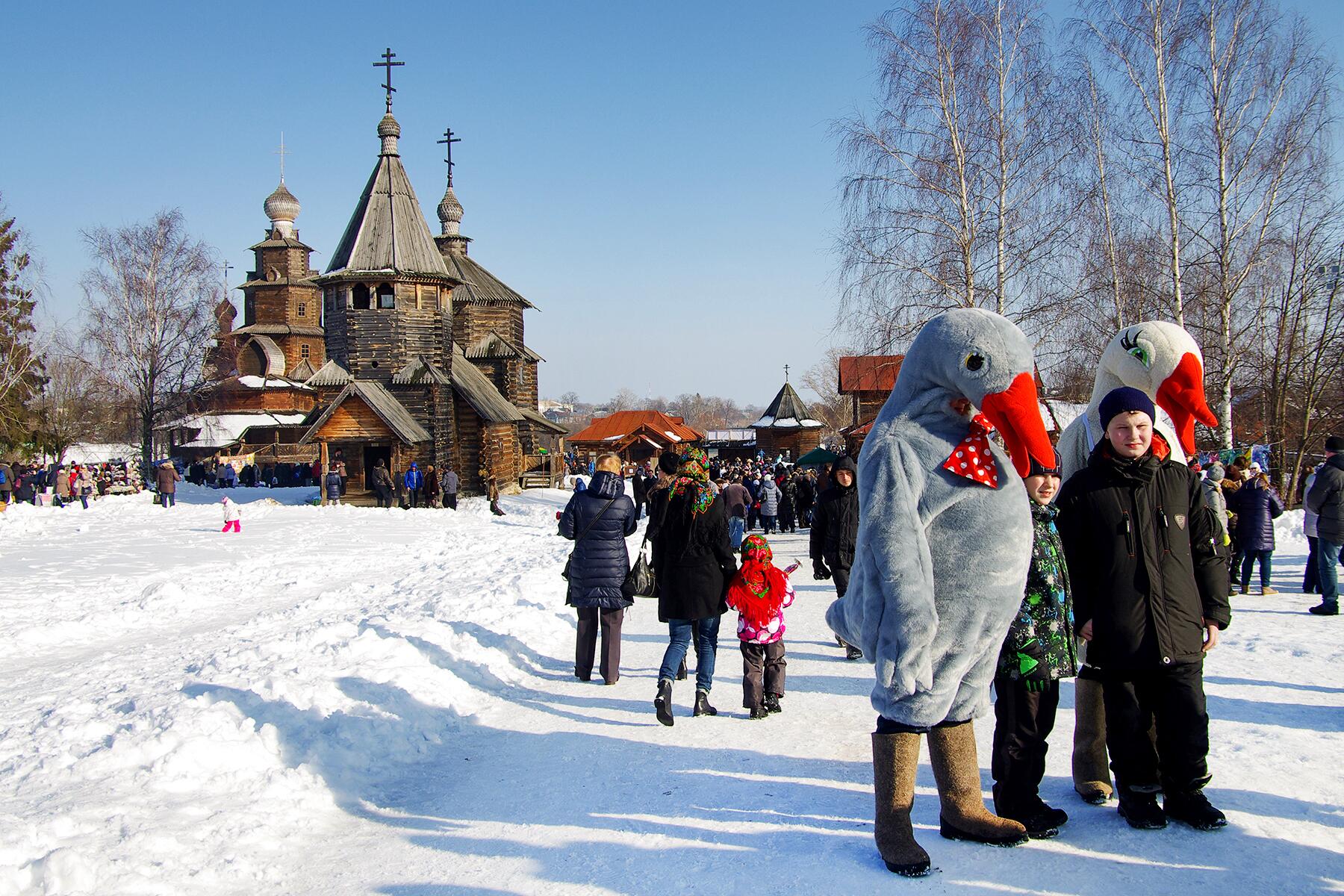 If Maslenitsa was discouraged during the Soviet era, the Suzdalites never got the memo. Once a mighty principality, Suzdal today is one of several medieval towns making up the Golden Ring of Russia, where they take their Maslenitsa very seriously. Head to the Museum of Wooden Architecture to sample traditional Medovukha or hot mead, and go for a thrilling troika ride around the periphery, harkening back to the ancient ritual of circumnavigating the community to coax the sun back to earth. Enjoy dancing, pancakes, a huge bonfire, sledding, skating, and performances by wonderful folk music ensembles. 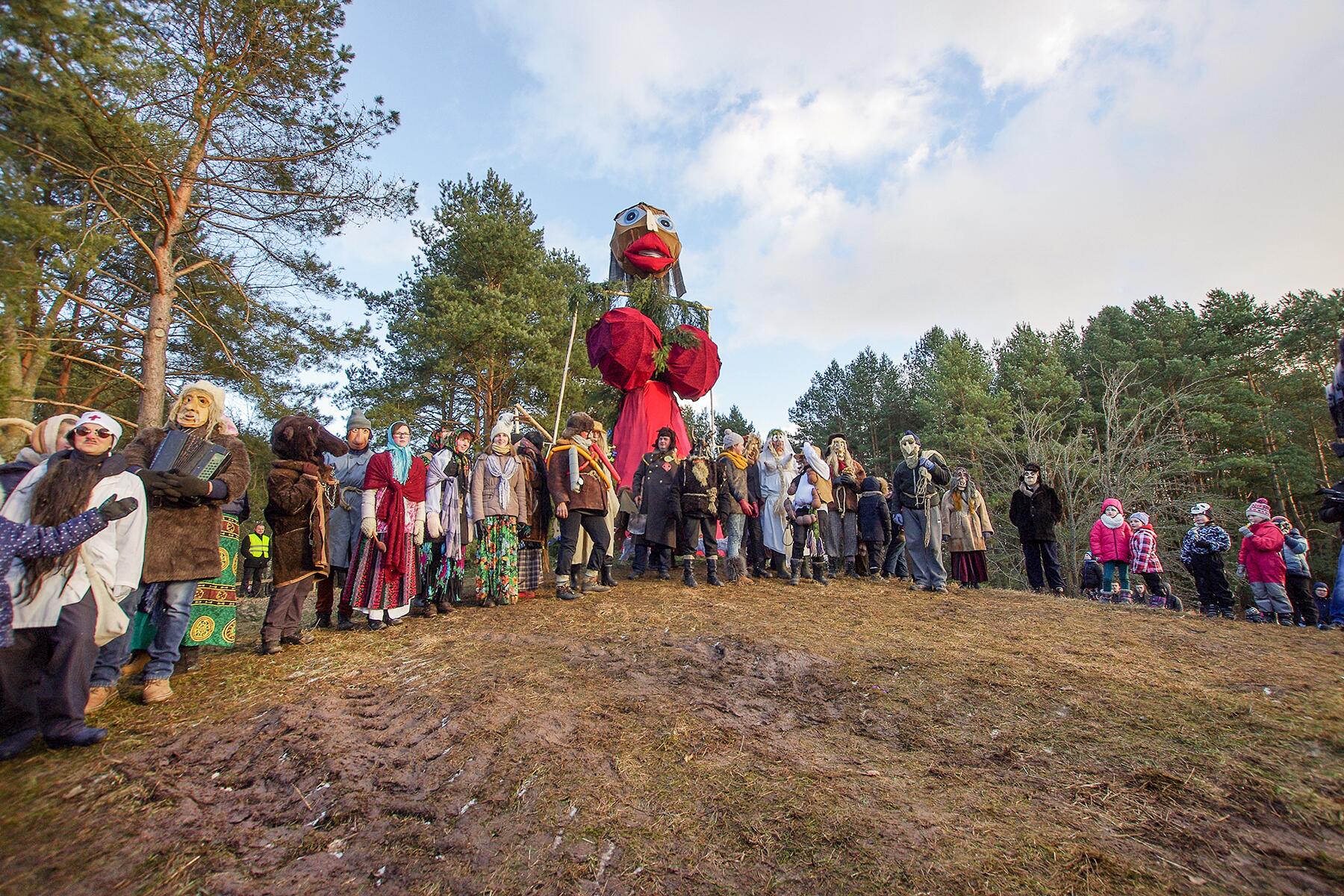 Užgavėnės in The Open-Air Museum

In Lithuania, the triumph of spring over winter is acted out in a yearly clash of two stock characters: Lasininis, a portly figure, representing winter, engages a lean “hemp man” called Kanapinis, who represents nascent spring. The fight is fierce, but Kanapinis is ultimately victorious. The Open Air Museum at Rumškiškes has revived many of the traditional Užgavėnės attractions: fortune-telling, sledding mountains, carousels, as well as cross-dressing masquerades and mummers, drinking and dancing. At the end of the festivities, a colossal hemp and fabric doll of More, a crone-like figure who embodies the darkest time of the year, is burnt in effigy to welcome spring. 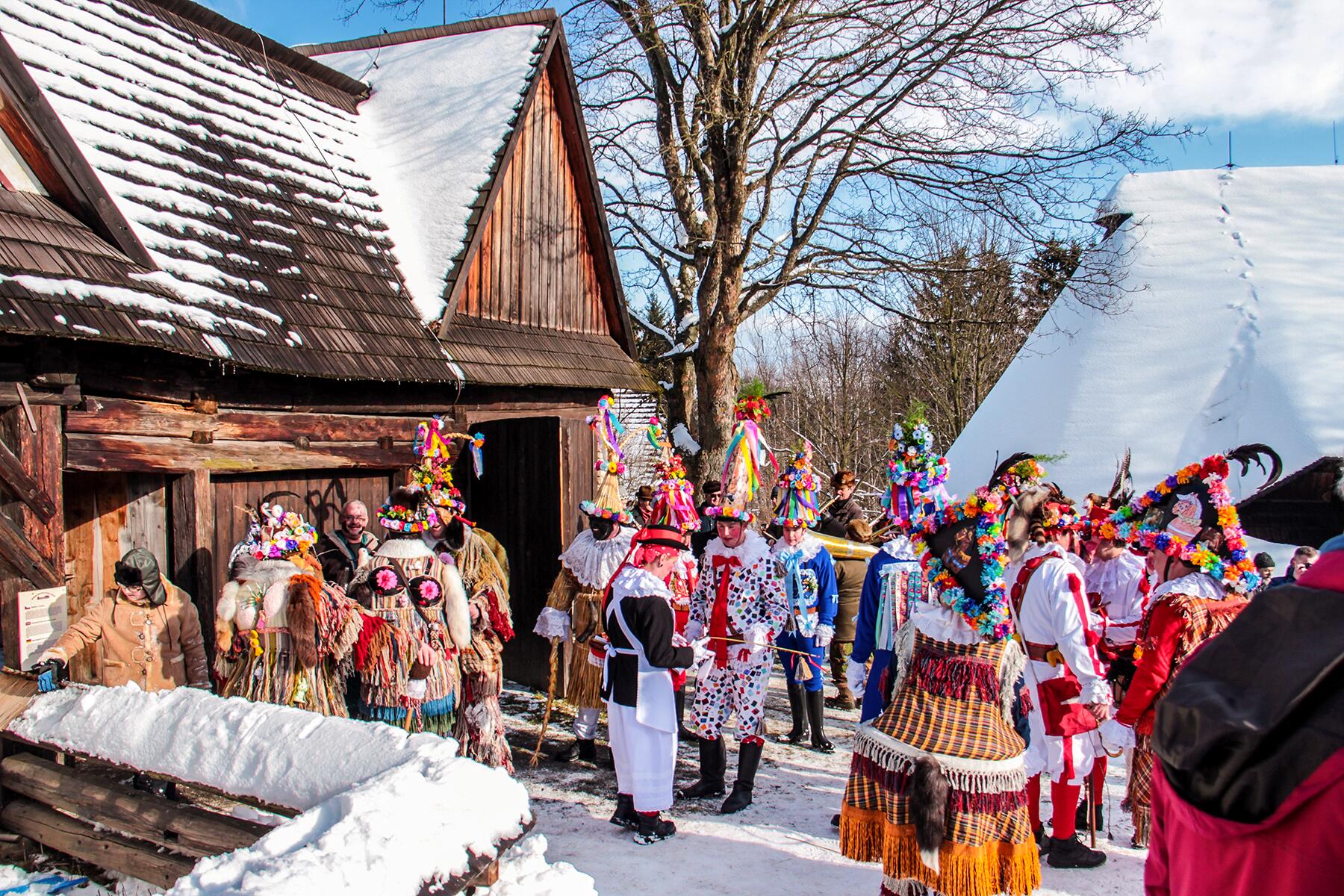 The ancient Shrovetide celebrations in the Hlineko Region of the Czech Republic—a UNESCO Intangible Cultural Heritage—are dream events for photographers. The towns’ men dress up in red and black masks and elaborate costumes, festooned with ribbons, and process from house to house, accepting traditional doughnuts and strong liqueurs. One character, “The Mare,” represents winter and is subjected to a hilarious mock trial and execution only to be revived by copious amounts of alcohol–it’s a ritual that emphasizes the cycle of nature renewing itself. Townspeople then head to a local pub for all-night drinking and dancing. 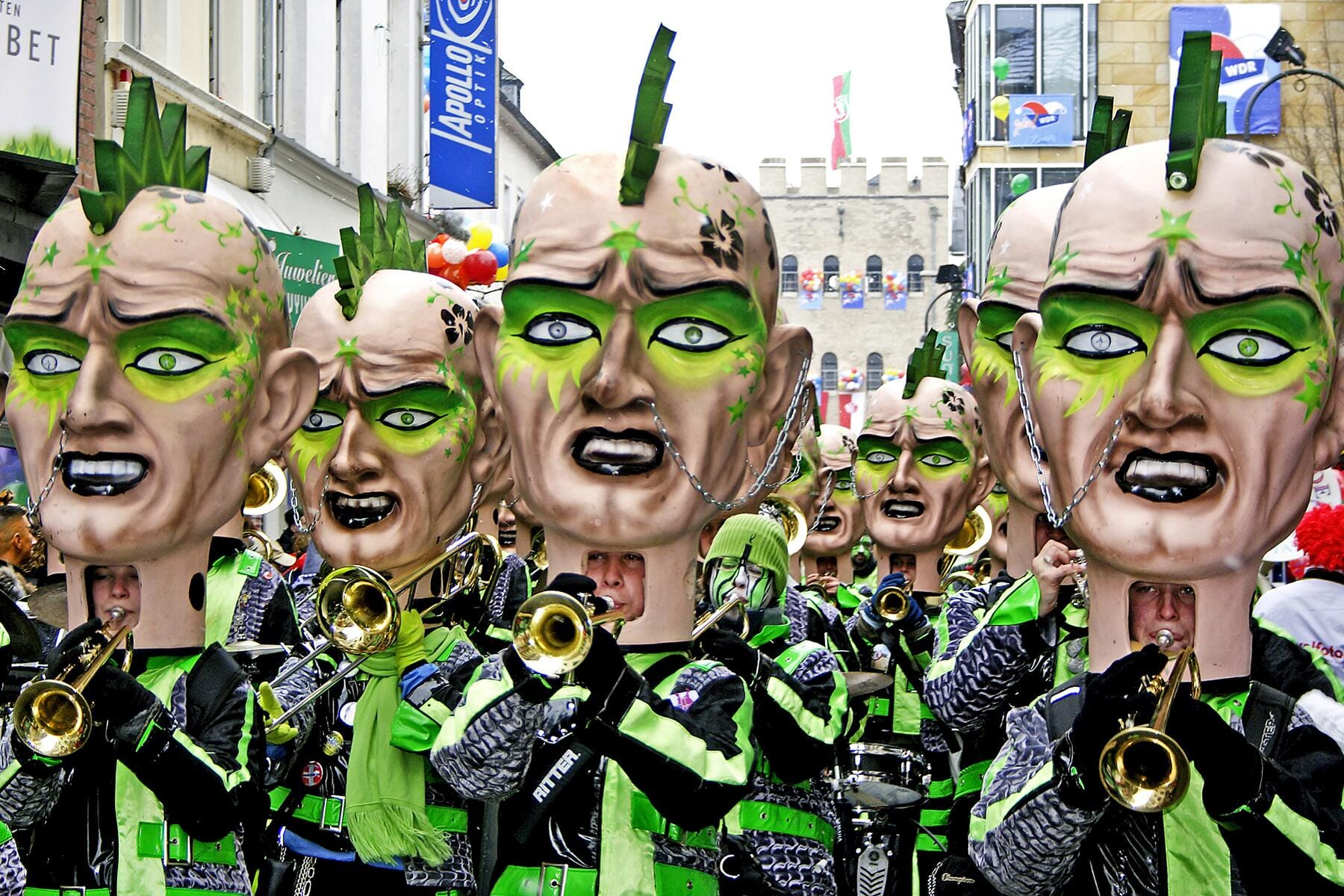 Known as “The Fifth Season,” Carnival in Cologne is a serious undertaking, involving 700,000 bars of chocolate, 140 tons of sweets, and more than 300,000 bouquets of flowers. “Carnival” comes from the Latin, “Carnelevarium” or “farewell to meat,” but has come to mean precisely the kind of festival atmosphere that takes over Cologne for four months, reaching fever pitch by the Monday before Shrove Tuesday, when the city turns out to watch the Rose Parade and take part in the city-wide celebrations. Balls and parties are held throughout the season, including the more recent addition of “Alternative” and LBGTQ balls.

INSIDER TIPEveryone is expected to dress up during Carnival, so be sure to pack some form of fancy dress, even if it is just a mask or a joke hat. 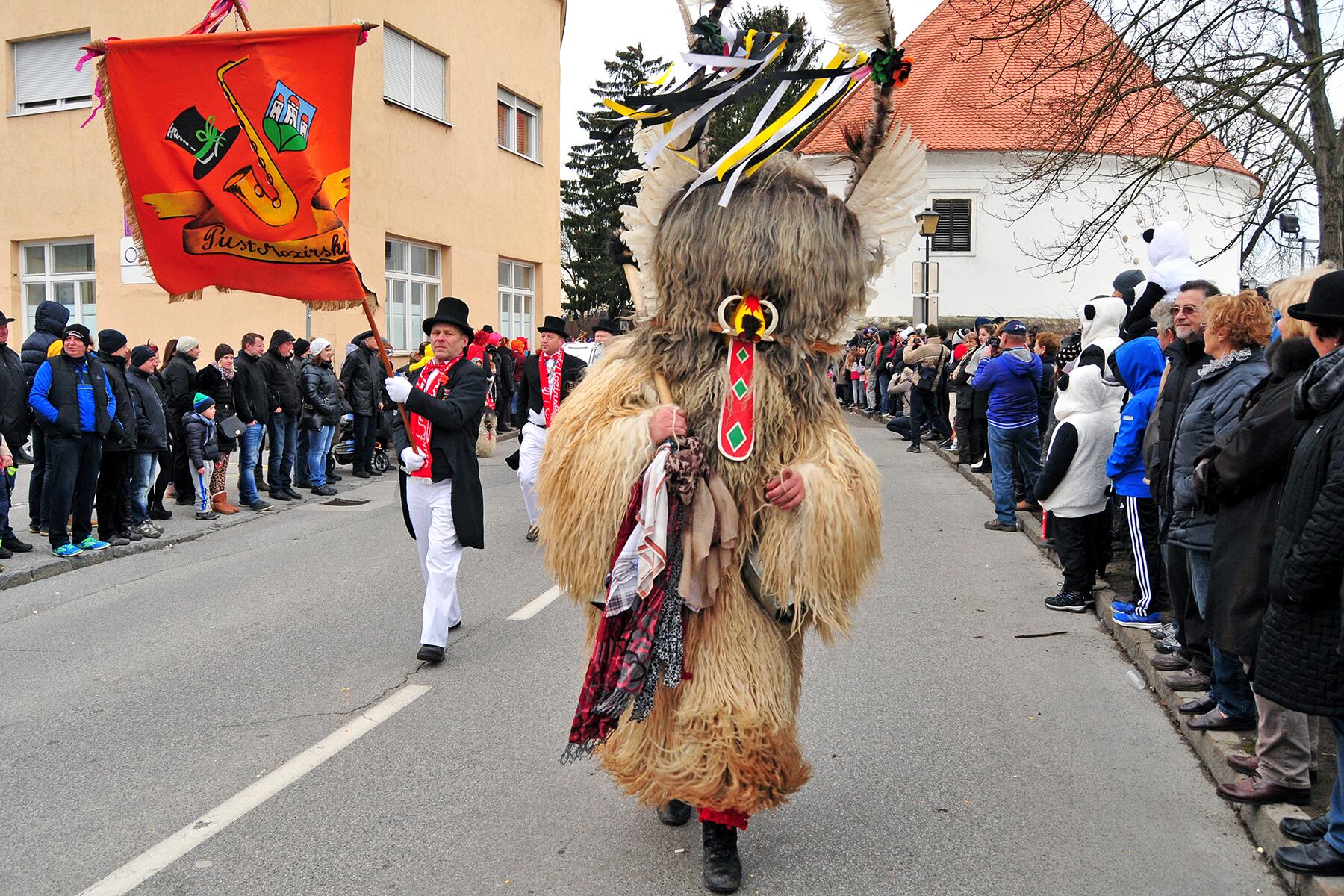 Slovenia’s Shrovetide celebrations seem determined to prove the old maxim: the longer you celebrate Shrovetide, the better the harvest will be! In Ptuj, Slovenia’s oldest town, Kurentovajne revelers don sheepskin costumes with belts of cowbells to ward off evil spirits, banish winter, and propitiate Kurent, an ancient god of extravagance and revelry. Masqueraders join the parade of Kurenti with masks that poke fun at political figures and celebrities. Scenic Ptuj provides the perfect backdrop to this ten-day festival of spring, food and drink, and community, which was declared a UNESCO Intangible Cultural Heritage in 2015 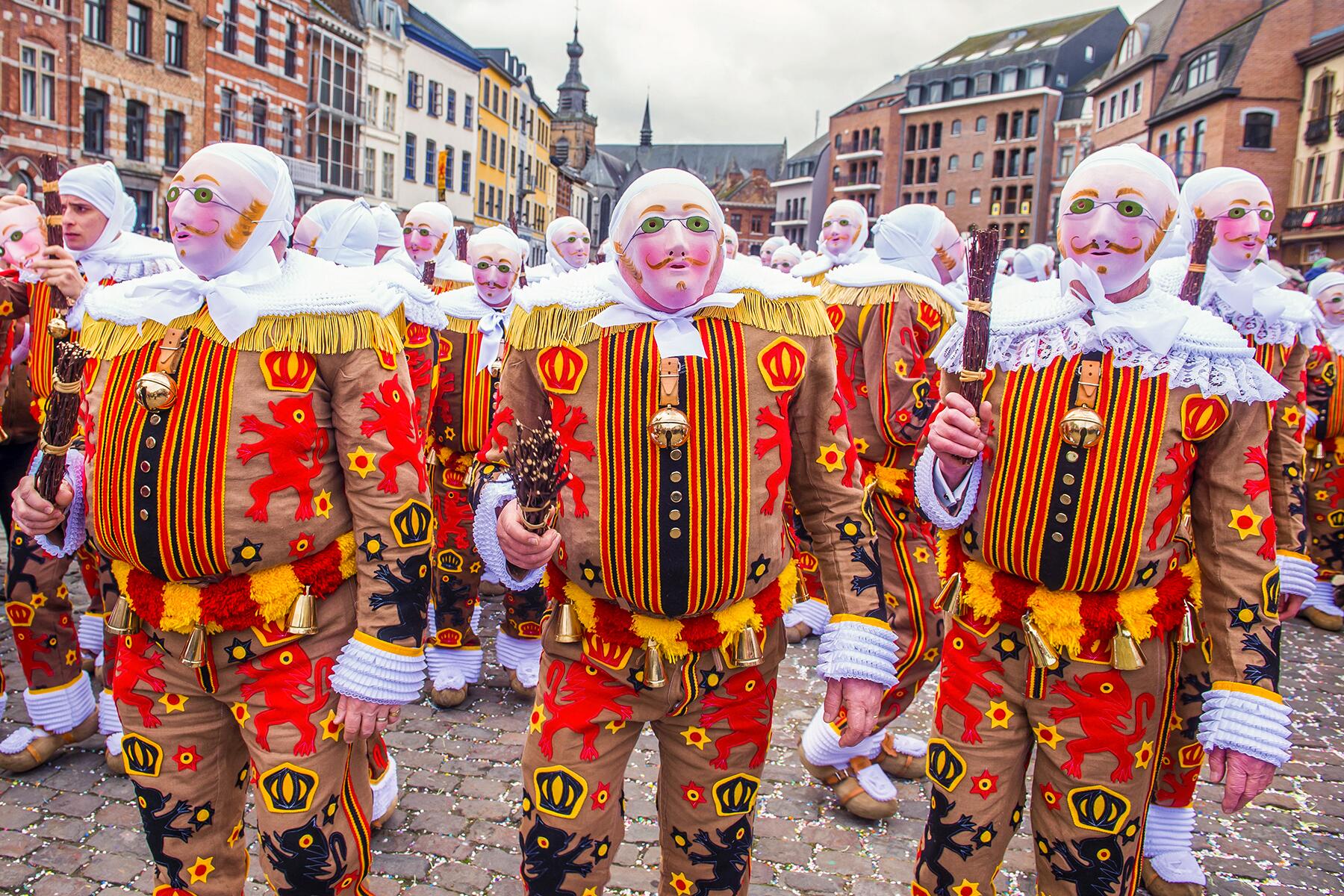 The origins of the tradition are sketchy, but for more than seven centuries the men of Binche, Belgium have donned of the white bonnets and heavy costumes of the “Gilles” and paraded through the streets of Binche, warding away evil spirits by waving branches of willows and clacking their wooden “sabots” on the cobblestones. This is Shrovetide in Wallonia, a lively parade in which the townspeople join the Gilles, dressed as Pierrots, peasants, or harlequins. Highlights include a huge battle with confetti and oranges, and the exquisite ostrich-feather headdresses that the Gilles sport as the UNESCO Intangible Cultural Heritage festival reaches its end.

INSIDER TIPAround 4 a.m., Parade Day begins early with a traditional breakfast, made up of champagne and oysters, as the Gilles go house to house rounding up their comrades.