Despite the fact that very few are still in operation in the United States, we can still learn a lot from these failed attempts at utopia.

As humans, we’ve long been on a quest to build the perfect society—we just haven’t quite gotten there yet. American utopian communities experienced a heydey during the transcendentalist movement of the 1840s and then again in the 1960s, where like-minded people banded together on the basis of shared religious, philosophical, or economic ideals. Here are 12 current and former utopian communities in the United States that you can still visit today to get a glimpse into how different groups of people attempted to achieve the ideal life. 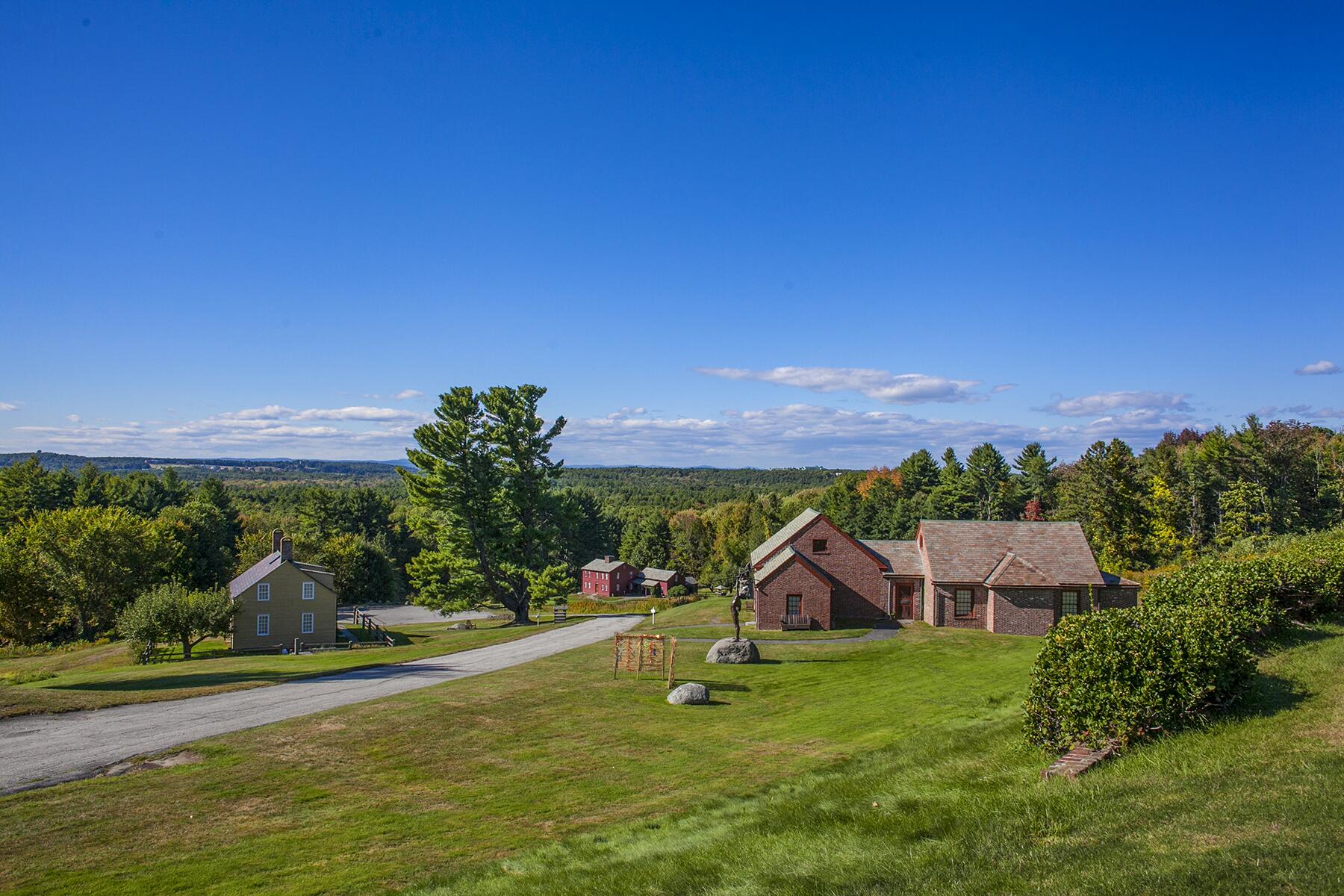 PHOTO: Courtesy of The Trustees
1 OF 12

In May 1843, Bronson Alcott started an experimental community based on the principles of Transcendentalism on a farm in Massachusetts purchased by one of his supporters. Members did not own personal property, trade with other communities, or rely on any outside hired labor. They also had a vegan diet and grew their own food, without the assistance of animal labor. Ultimately, they ran out of food and the community disbanded in December 1843. Alcott’s daughter, Louisa May Alcott, would later write a fictionalized version of her experience in a short story entitled “Transcendental Wild Oats.” Today you can visit the original farmhouse, which now operates as a museum. 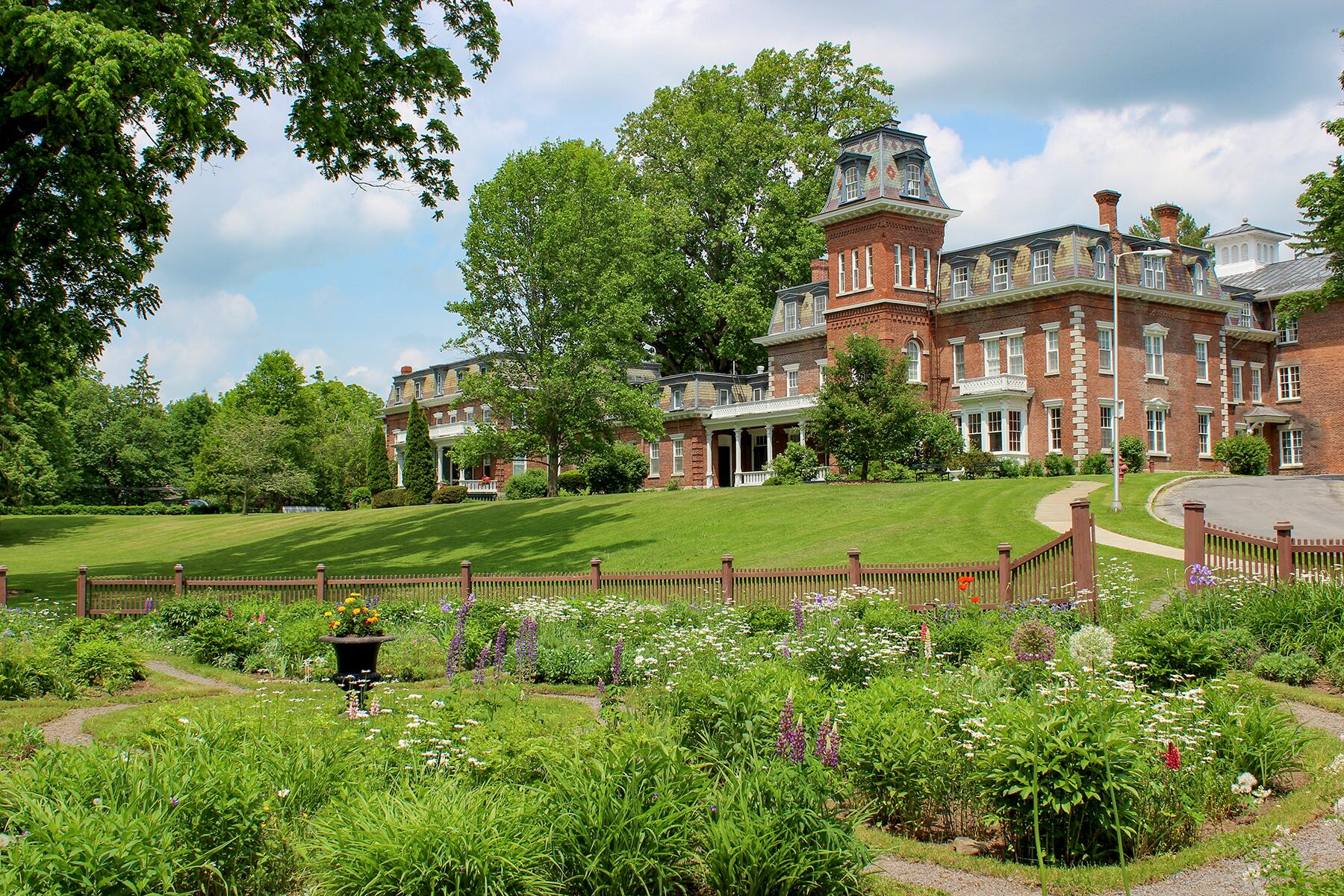 If you hear the word “Oneida” and think of silverware, you’re on the right track, but before they got there, they were a pretty radical utopian community. In operation between 1848 and 1880 under the direction of John Humphrey Noyes, the Oneida Community aimed for perfection. By striving for gender equality, placing an emphasis on health, and recognizing the importance of women’s sexual pleasure, they were ahead of their time. But in other ways, the community failed its citizens in devastating ways, like having all young girls introduced to sex by older men in the community (frequently Noyes himself). Part of the community’s system of “complex marriage” was that every man was married to every woman in the group. While that initially seemed to work, eventually, the prohibition on monogamous relationships contributed to the community’s demise. The Oneida Community managed financially through a series of businesses, the most successful being manufacturing the tableware that many people still use today. After the community disbanded in 1880, it formed a joint-stock corporation now known as Oneida Ltd. Not only can you visit and tour the Oneida Community Mansion House, but you can also stay overnight in some of the original rooms.

INSIDER TIPBe sure to visit the community’s library, located inside the Mansion House. It’s full of natural light and hard-to-find books on utopian communities. 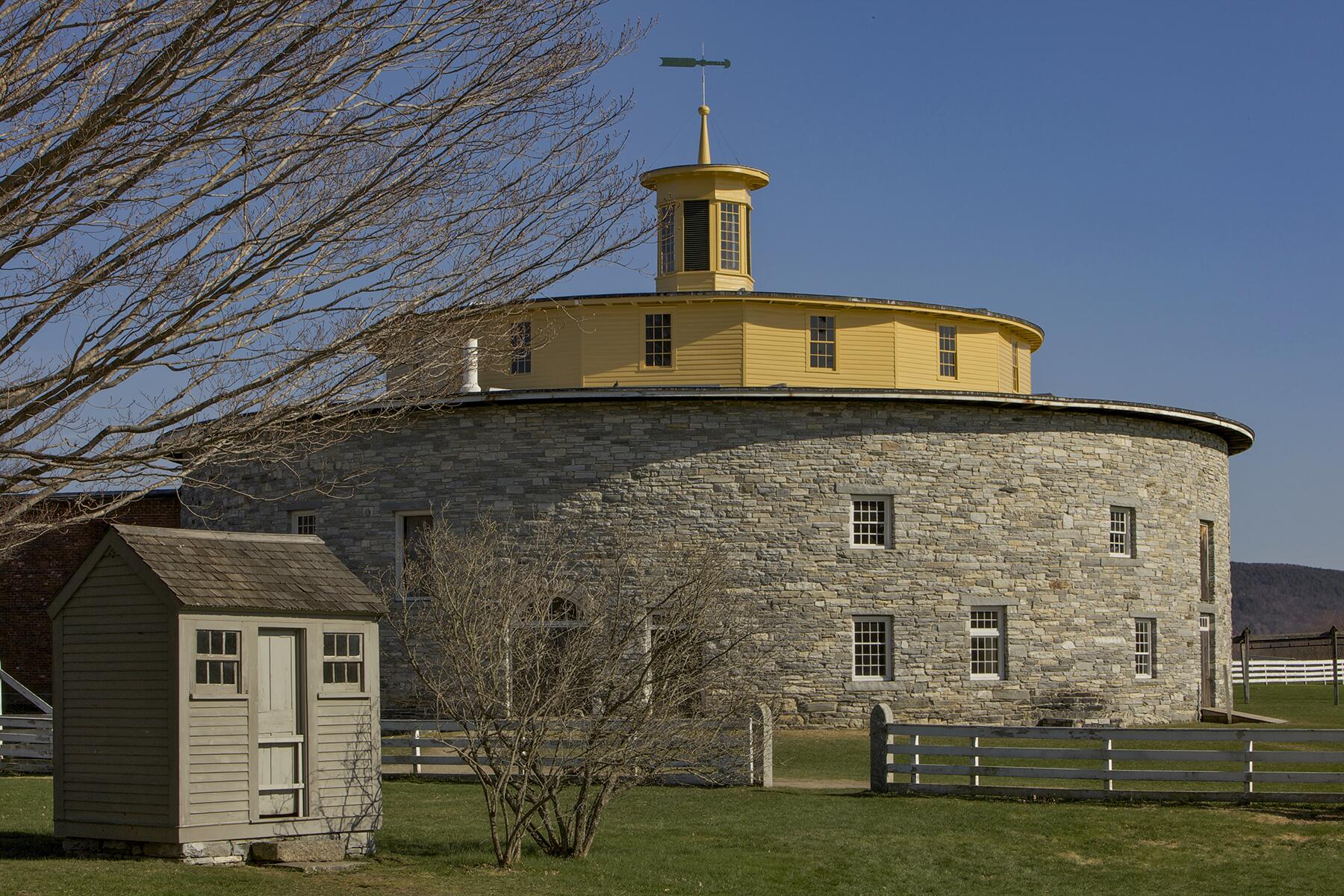 Though this wasn’t the first Shaker community in the United States, it’s one of the best-preserved. In operation in this location since the late 1780s, the Hancock Shaker Village peaked in the 1830s with around 300 residents. Today, there are 20 preserved buildings on-site, as well as a working farm. Spend a day exploring the different parts of the village to get an inside look into what Shaker life was like, including exhibits about their famous furniture, medicinal plants, and innovative healthcare measures.

INSIDER TIPGo in the fall when the surrounding hills covered in colorful leaves make a stunning backdrop. 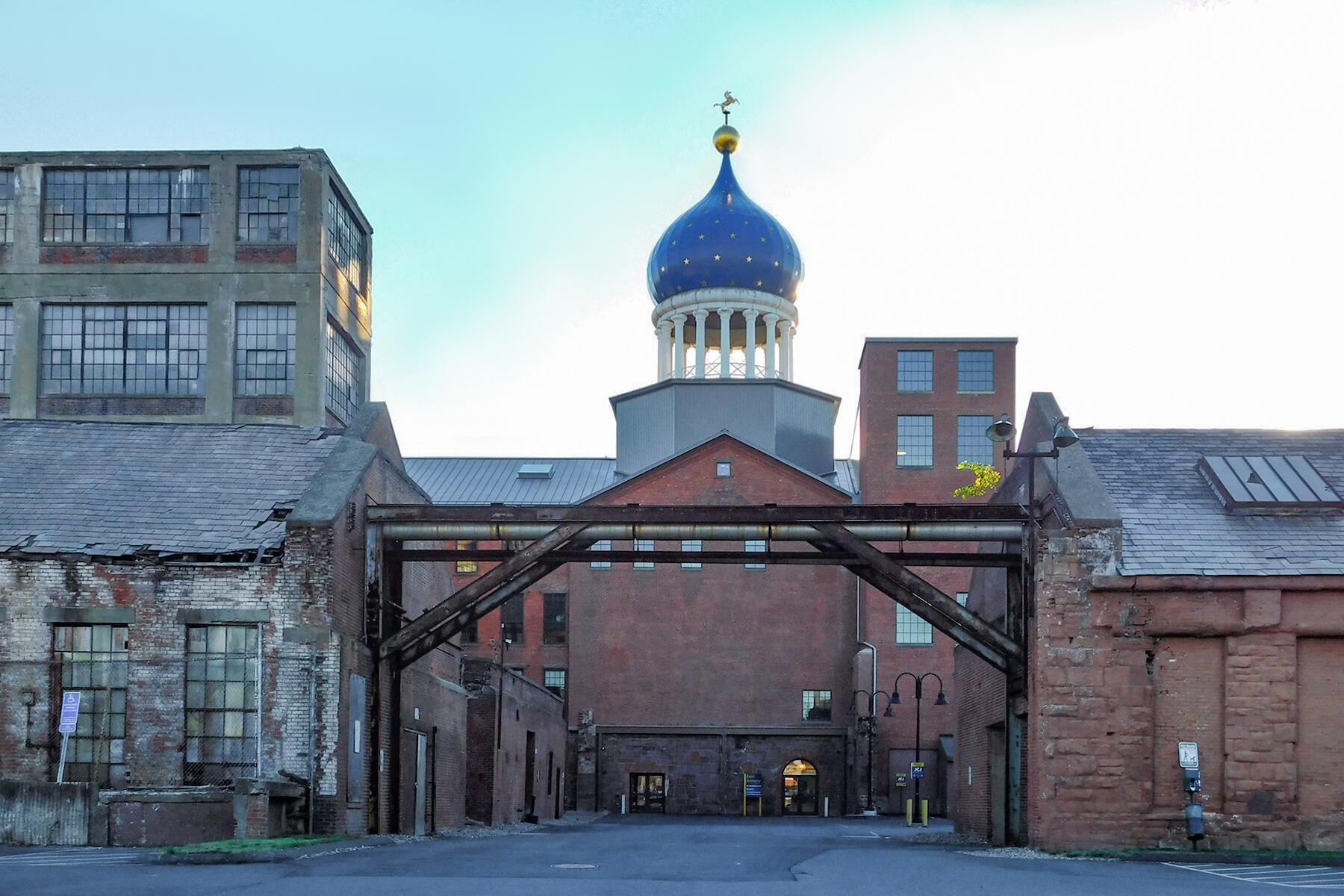 Founded by Samuel Colt, an innovator of the revolver, Coltsville was part company town, part utopian community. The gun guru attempted to create an ideal village for his employees, complete with social halls, a church, botanical gardens, and housing for workers. Today, the town is in ruins but is now under the direction of the National Parks Service. Though it’s technically not officially a park yet, there are ranger-led tours of the site and other events on-site like concerts and farmers’ markets.

INSIDER TIPThe Mark Twain House is nearby and would be another great stop on a historical day trip. 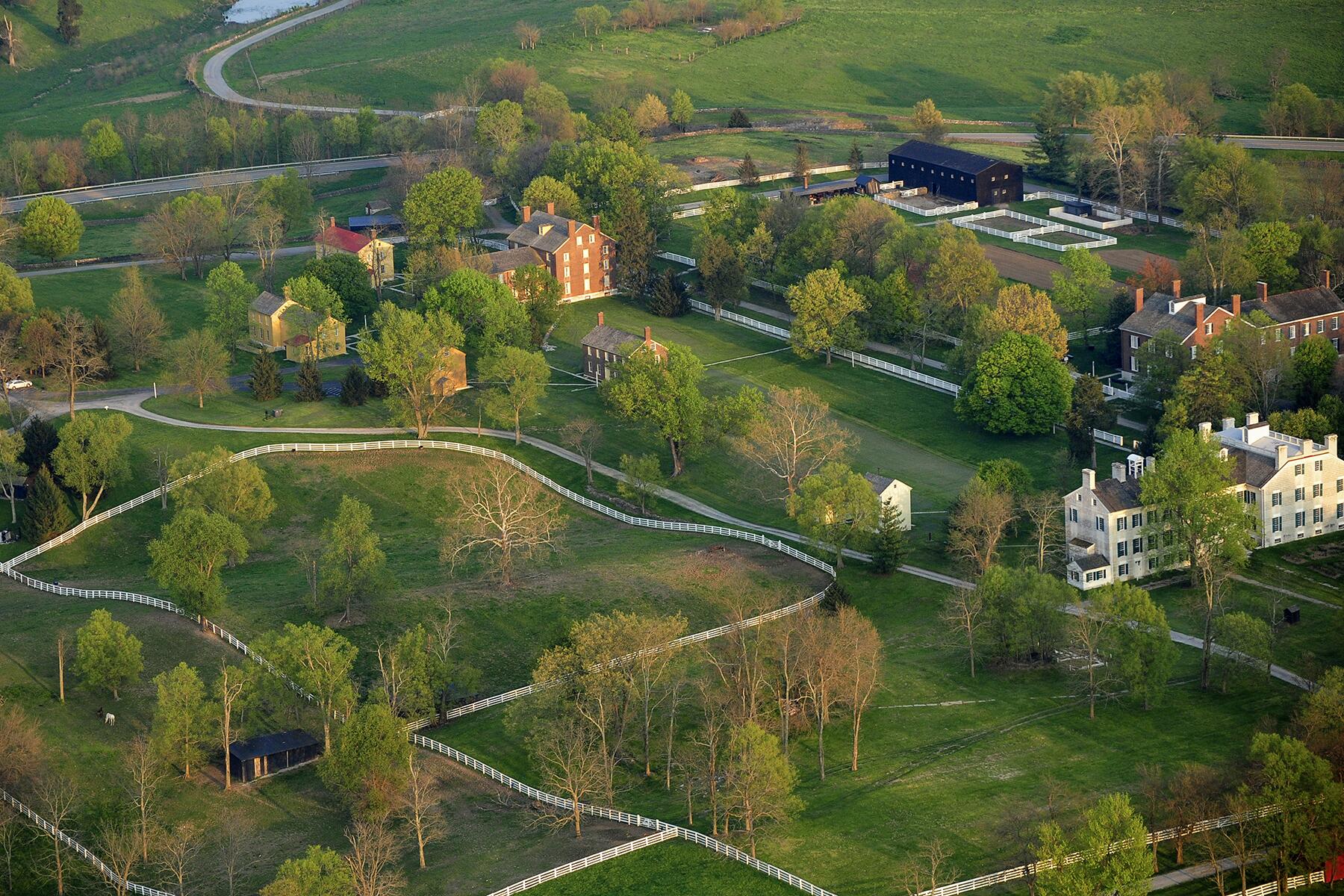 PHOTO: Courtesy of Shaker Village of Pleasant Hill, Kentucky
5 OF 12

Established in 1805, the Pleasant Hill community was home to hundreds of members during its 105-year lifespan as an active Shaker village. During that period, the community constructed more than 260 buildings on the site, as well as one of the first municipal water systems in Kentucky. Today, the village operates as a museum, historical center, working farm, and a nature preserve, and offers overnight accommodations in original Shaker buildings. Visit during the summer and take a ride on the riverboat the Dixie Belle, and stop by their restaurant year-round for homemade locally-sourced meals.

INSIDER TIPEvery day at 4:30 pm there is a “poultry parade,” when the ducks line up and march into their coop for the night. 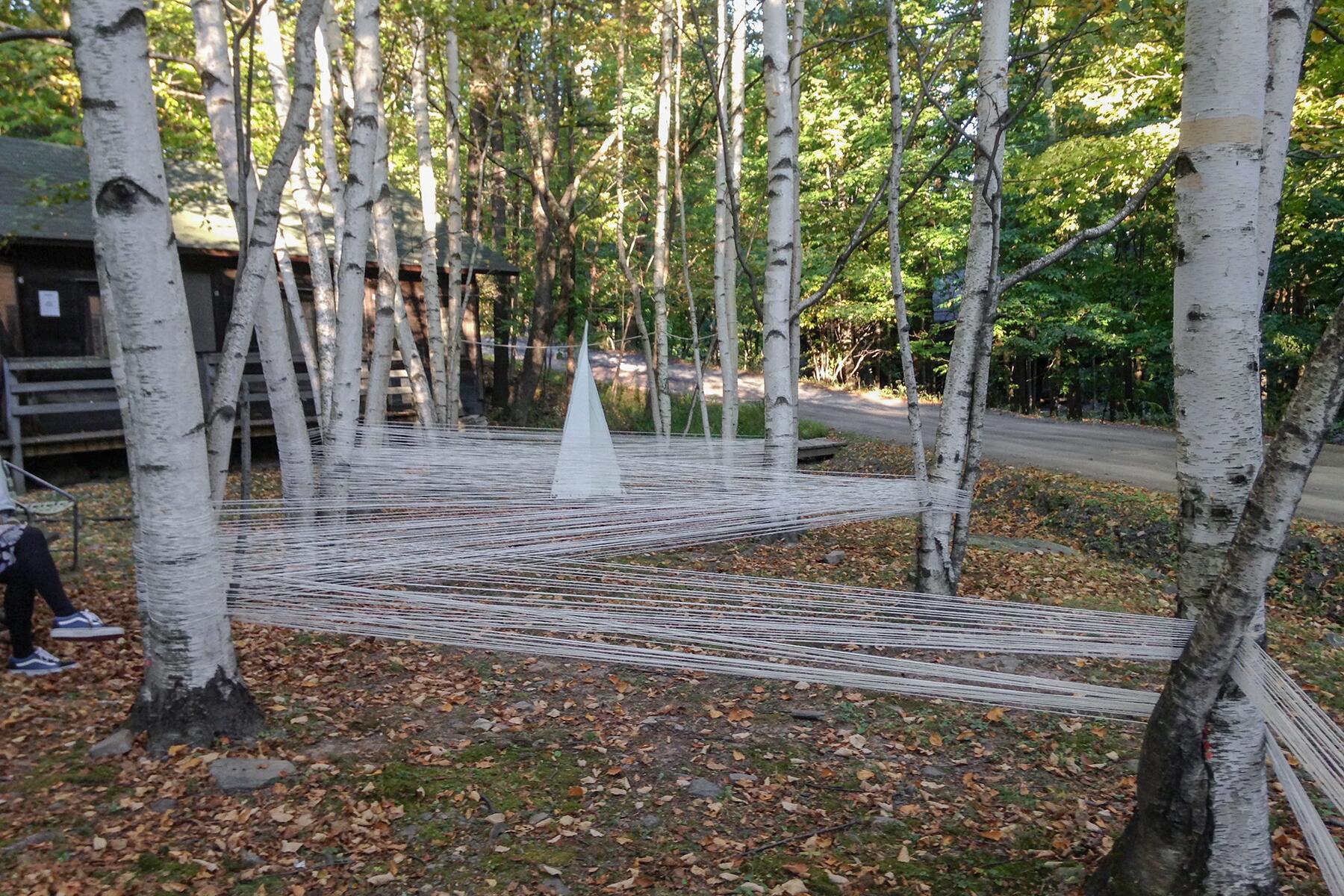 As a response to the rapid industrialization of the late 19th century, the Arts and Crafts movement started in England and eventually made its way to the United States. One of the best examples of a rural arts-focused utopian community is the Byrdcliffe Arts Colony, which was founded in 1902. When construction was completed a year later, the community consisted of 30 buildings. Both students and teachers took up residency at Byrdcliffe, making everything from pottery to furniture to paintings. In 1976, Byrdcliffe became part of the Woodstock Guild of Craftsmen, which still operates it today. Events, as well as tours of the site, are offered on a regular basis.

INSIDER TIPClasses are still offered at Byrdcliffe, on topics ranging from writing to nature to weaving. 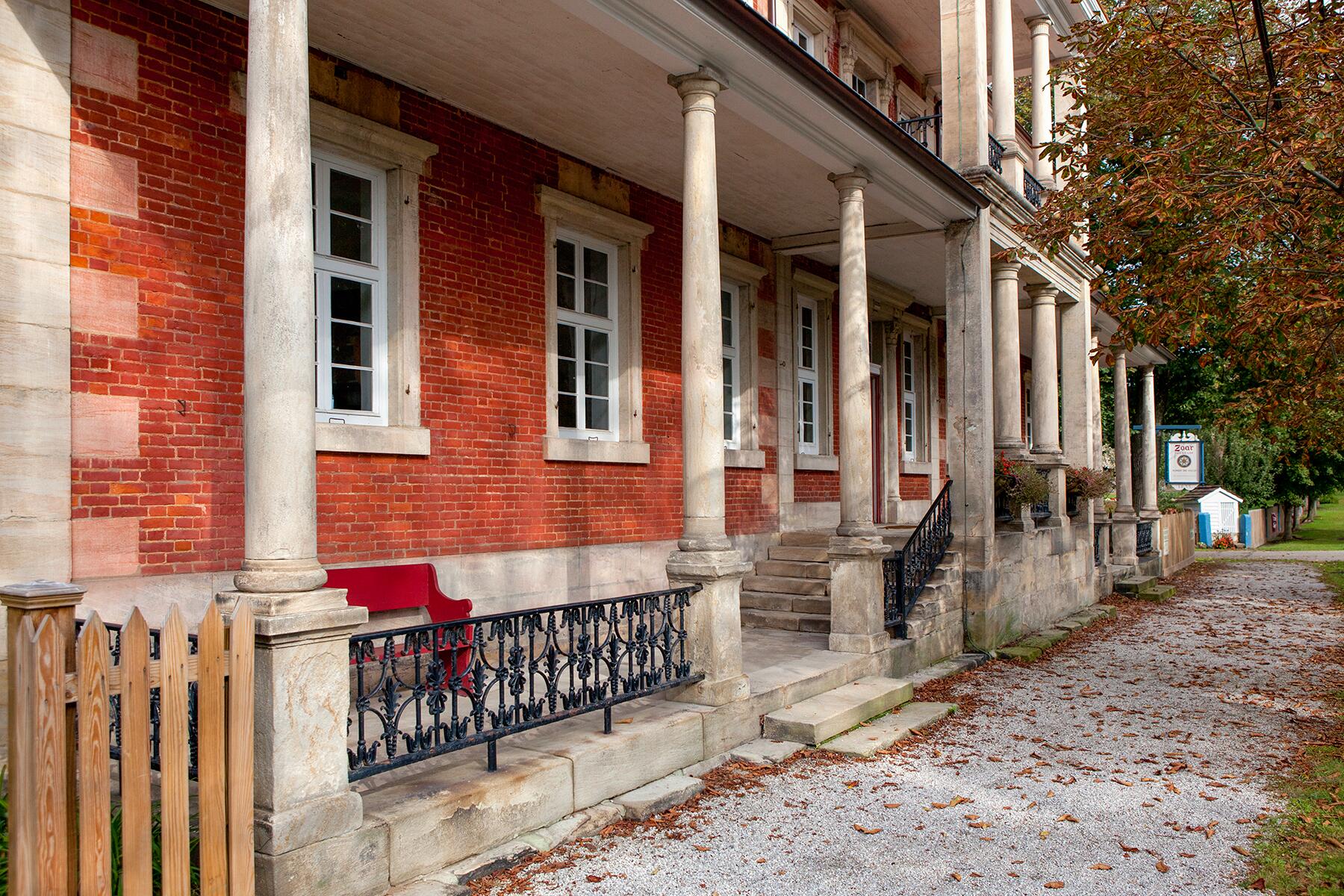 Located about an hour’s drive south of Cleveland, Zoar is a historical village that operated as a utopian community from 1817 to 1898. This former German separatist communist micro-society was built on the idea of communal living and features German-inspired architecture, making it feel more like a small European town than a village in Ohio. There are also several historical accommodation options for visitors, including in the old cider mill, schoolhouse, and cobbler’s shop.

INSIDER TIPEach summer, Zoar Village offers an adult history camp, as well as classes throughout the year on trades like pretzel-making and blacksmithing.

PHOTO: Courtesy of Massachusetts Department of Conservation and Recreation (DCR)
8 OF 12

During its six years of operation (1841-1847), the residents of the Brook Farm community tried to combine work with intellectual pursuits in an attempt to create an ideal society. There was a strong emphasis on education and equality, as well as a balance of work and leisure. Famous members of the Brook Farm community include Horace Greeley, Nathanial Hawthorne, and Margaret Fuller. Though there’s very little left of the original farm today, the site is a state park and is open to the public.

INSIDER TIPHawthorne’s novel The Blithedale Romance was based on his time at Brook Farm. 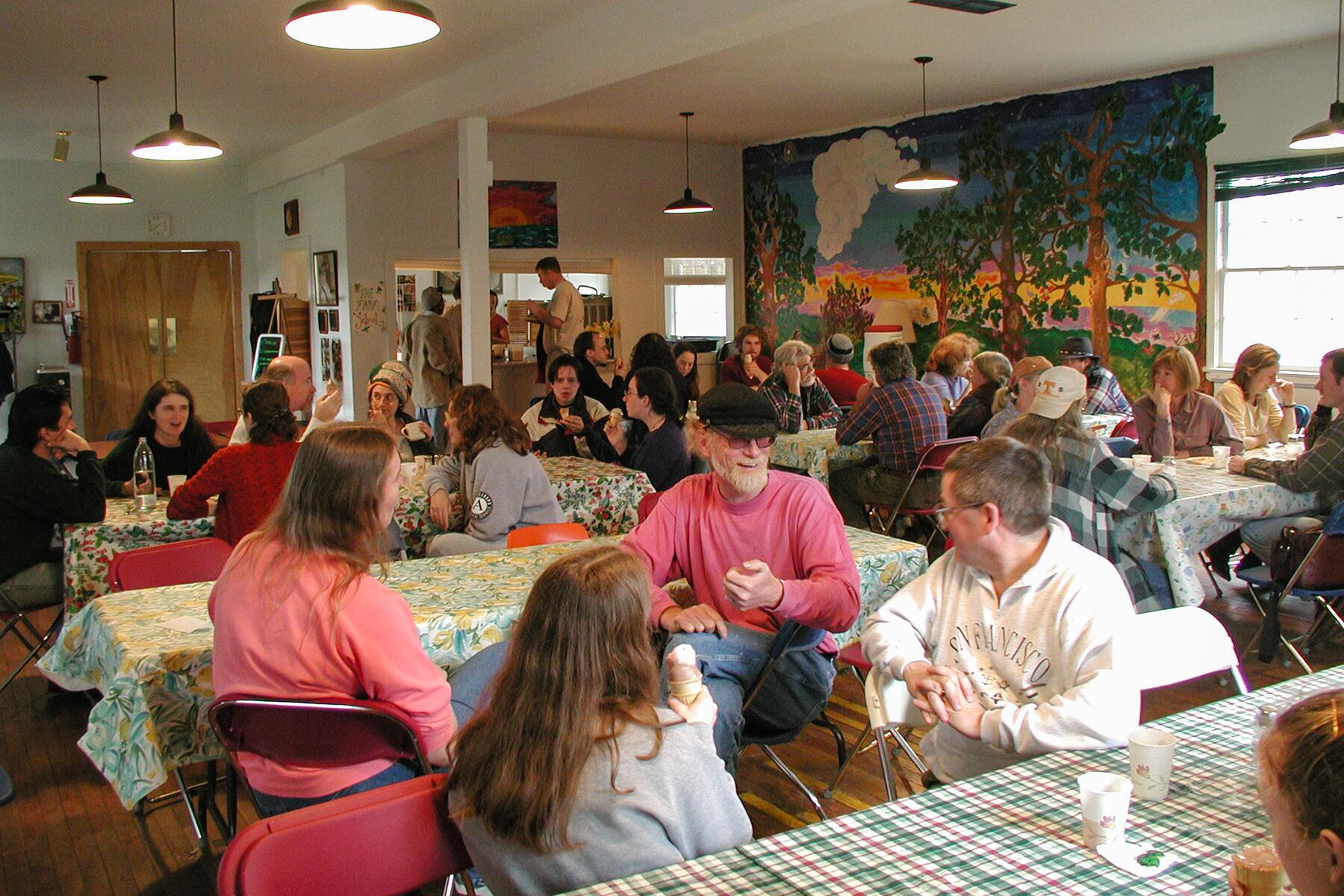 PHOTO: Courtesy of The Farm Community
9 OF 12

The Farm Community has its roots in the San Francisco counterculture of the late 1960s. Some of its members embarked on a four-month caravan across the United States in brightly colored school buses before deciding to start their own community in Tennessee. The Farm was founded in 1971 on the principles of nonviolence and respect for the earth and has operated in accordance with them since. The Farm welcomes visitors every day and offers guided tours as well as other events and classes that are open to the public.

INSIDER TIPThere are a variety of accommodation options for those who wish to stay overnight. 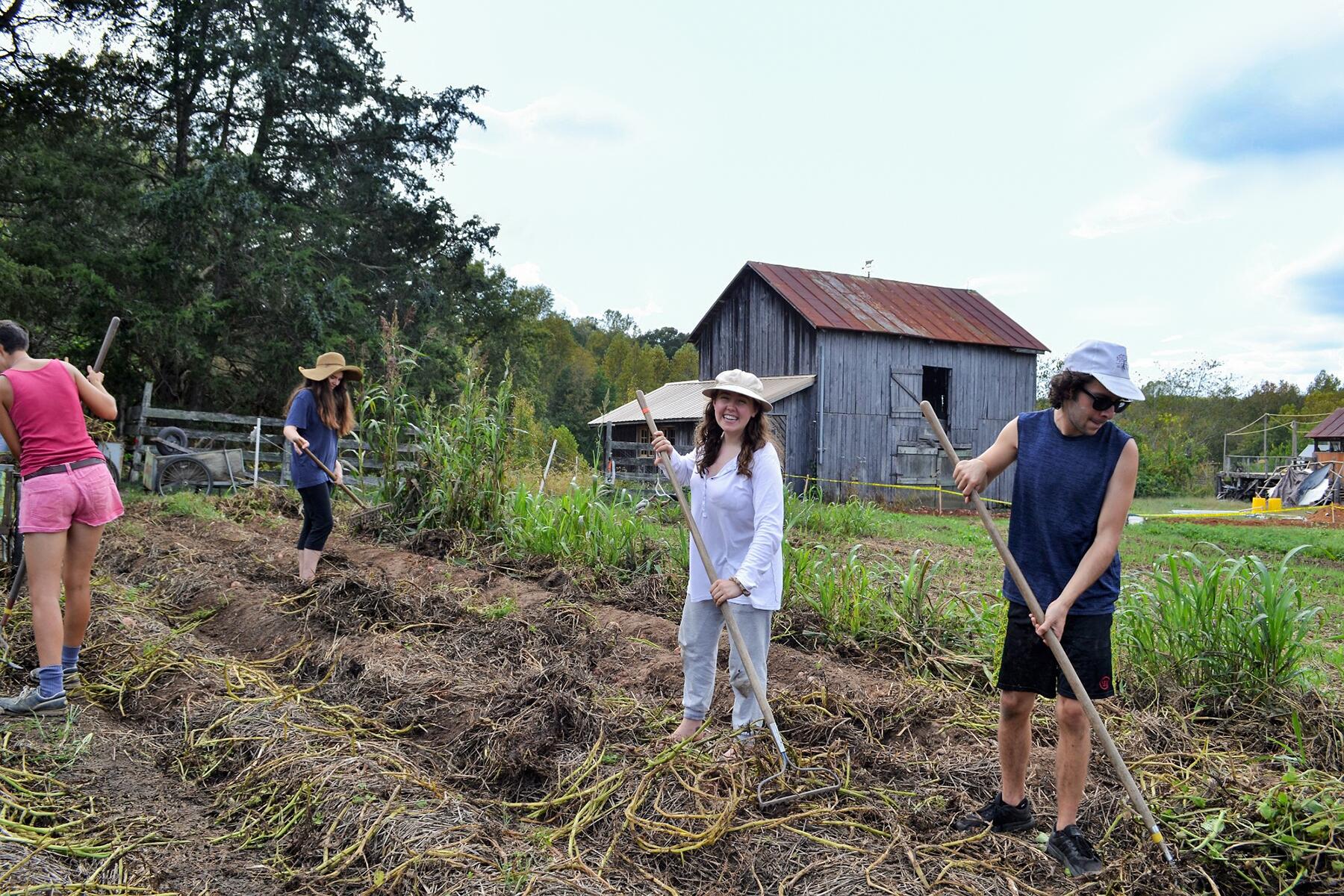 Since 1967, this intentional community has operated in rural Virginia based on the values of cooperation, sharing, nonviolence, equality, and ecology. Today, around 90 adults and 15 children are part of the Twin Oaks Community, which is largely self-sufficient. The secular group participates in income sharing, with most adults making hammocks or tofu, which are then sold outside of the community. Twin Oaks welcomes visitors—including overnight guests—but prior notice must be given before showing up on the property.

Arcosanti is a little different than the other places on the list because its members consider it an “urban laboratory” rather than a traditional utopian community. Founded in 1970 by architect Paolo Soleri, Arcosanti is his experiment in “arcology”—a combination of architecture and ecology—as an attempt to create a dense city preventing urban sprawl. The complex looks like something out of a science fiction movie, complete with two large apses rising up in the desert landscape. Guided tours and overnight stays are offered every day.

INSIDER TIPVisitors can purchase Cosanti Windbells, which are made on the premises. 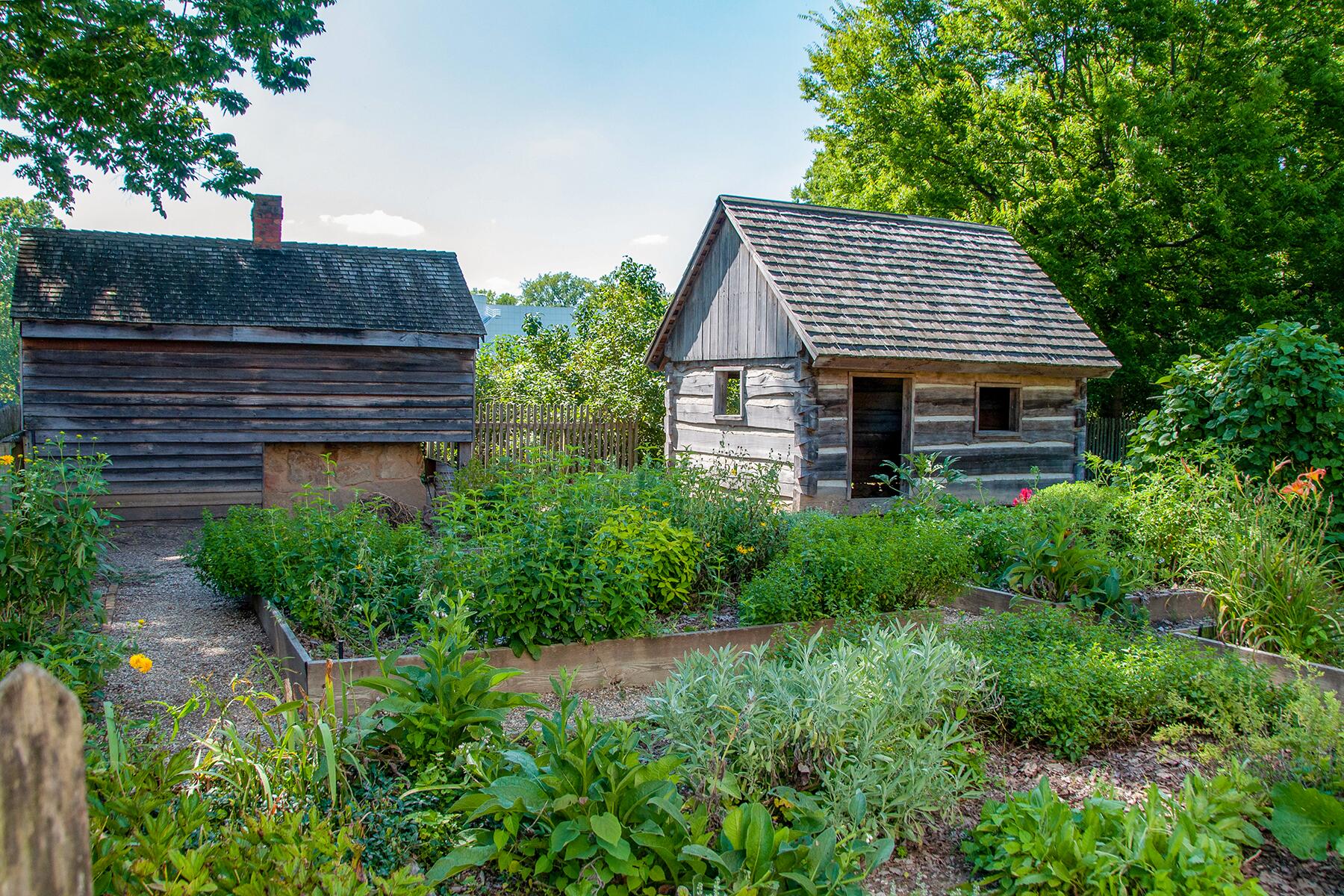 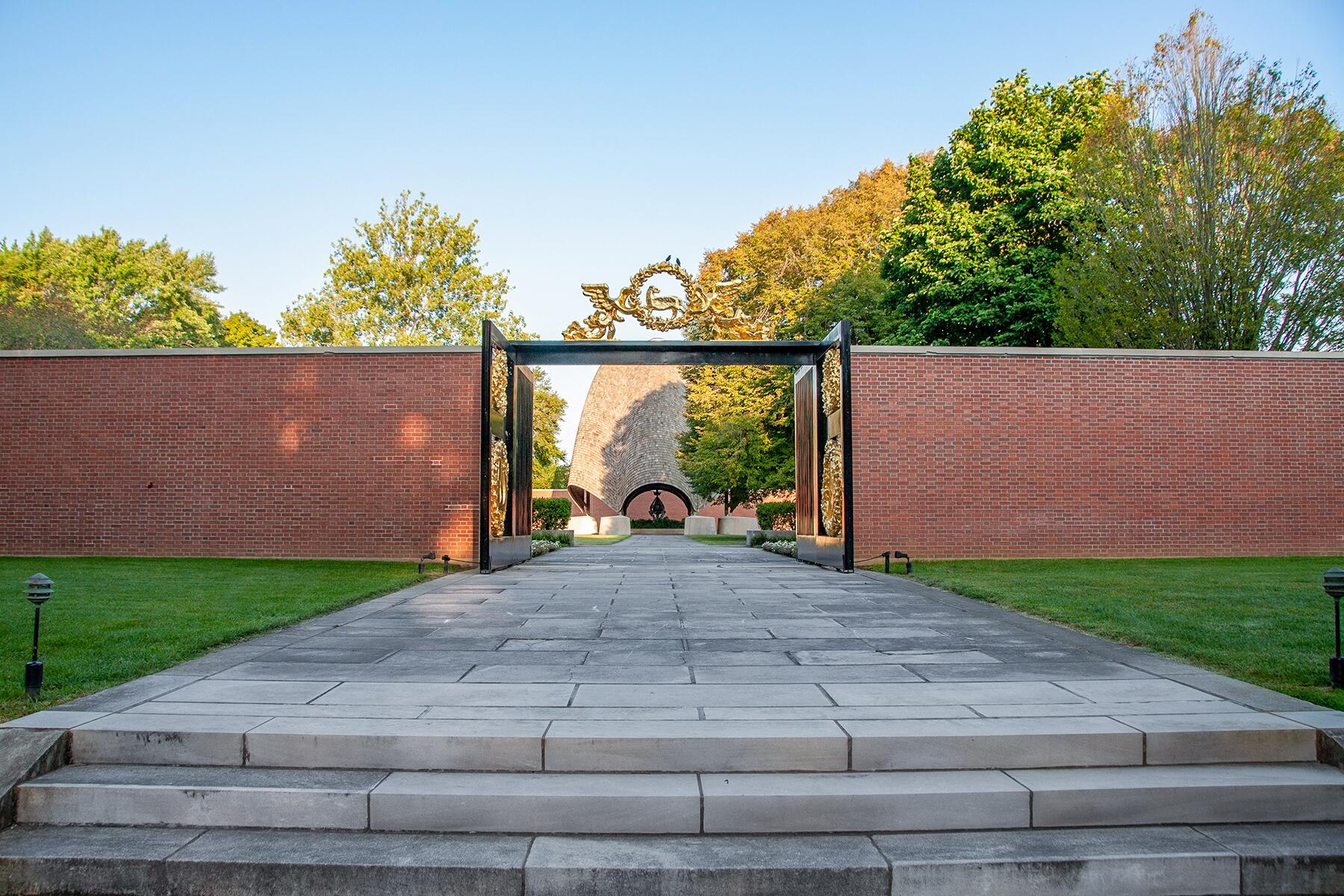 New Harmony has been home to not one, but two experimental utopian communities. The first was founded in 1814 by Pietists from Germany who believed in a literal interpretation of the bible. Within a decade, the New Harmonists had built 180 structures and had become self-sufficient by selling a variety of goods they manufactured to buyers in the United States, United Kingdom, the Netherlands, Switzerland, and Germany. In 1825, a wealthy businessman purchased the settlement and attempted to create his own utopian community based on education and social equality. Though it only lasted two years, it attracted some of the most important thinkers of the time, including Thomas Say, Gerard Troost, and Frances Wright. Today, visitors can take historical tours of the property from March through October.