What’s the best place in your home state off the typical tourist’s radar?

For those of us who live far away from our families or the places we grew up, it can be difficult in a time of social distancing, quarantine, and COVID-19-related lockdowns to not be able to go back to that familiar place. We asked Fodor’s editors to think about their favorite quiet jewel about their home (or adopted) state. These underrated spots are worth a trip. 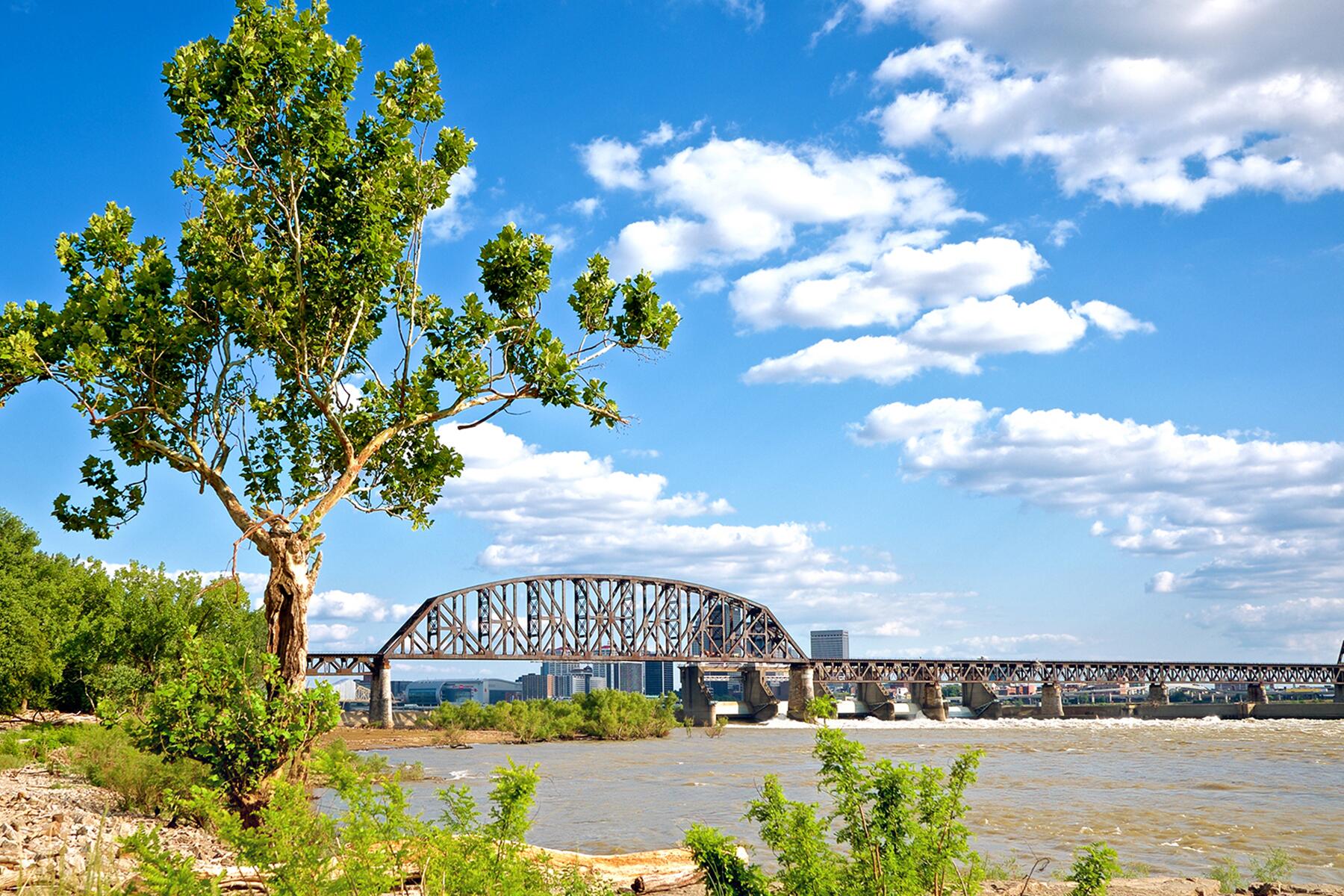 Falls of the Ohio State Park

The crossroads of America state is more than just fields and small towns, it’s also home to a huge fossil bed. Head to the Southern tip of the state and you’ll find Falls of the Ohio State Park, a fossil bed, museum, and hiking grounds sitting right at the edge of the Ohio River. When the water is low, you’re able to walk out into the river bed where just below your feet lie thousands of prehistoric fossils. You can explore the site’s small caves as well as check out the short hiking trails for more secluded exploring. 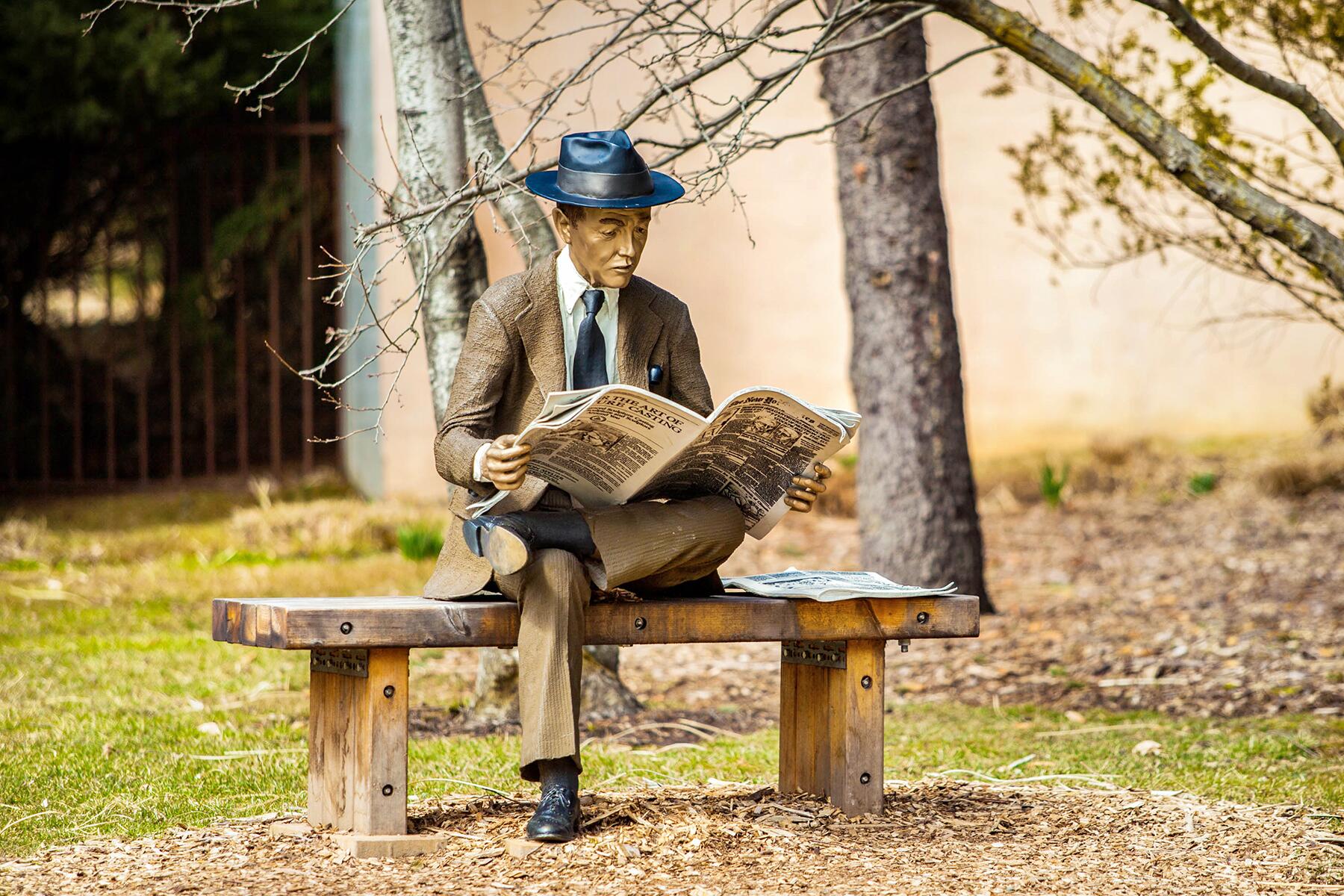 Who would think that just 40 minutes off of the New Jersey Turnpike, nestled in bucolic Hamilton, New Jersey, lies a 42-acre sculpture park, museum, and arboretum? Probably not the millions of people who use the turnpike every year, but there is, and it’s called Grounds for Sculpture. Amid metal arcs, stone creations, and bronze bulls, beautiful paths wind through flower gardens, reflecting pools shimmer, and a pond teems with wildlife. Opened to the public in 1992, the private space was created by Seward Johnson (of the Johnson & Johnsons) as a place for everyone to appreciate art, in particular his, which many critics dismissed. However, Johnson’s works are some of the property’s highlights; he’s known for his extremely lifelike bronze sculptures including recreations of Monet’s Terrasse à Sainte-Adresse and Renoir’s Le déjeuner des canotiers. There are indoor exhibits too, and the charming Rat’s Restaurant, which was named after the popular character from Kenneth Grahame’s Wind in the Willows. 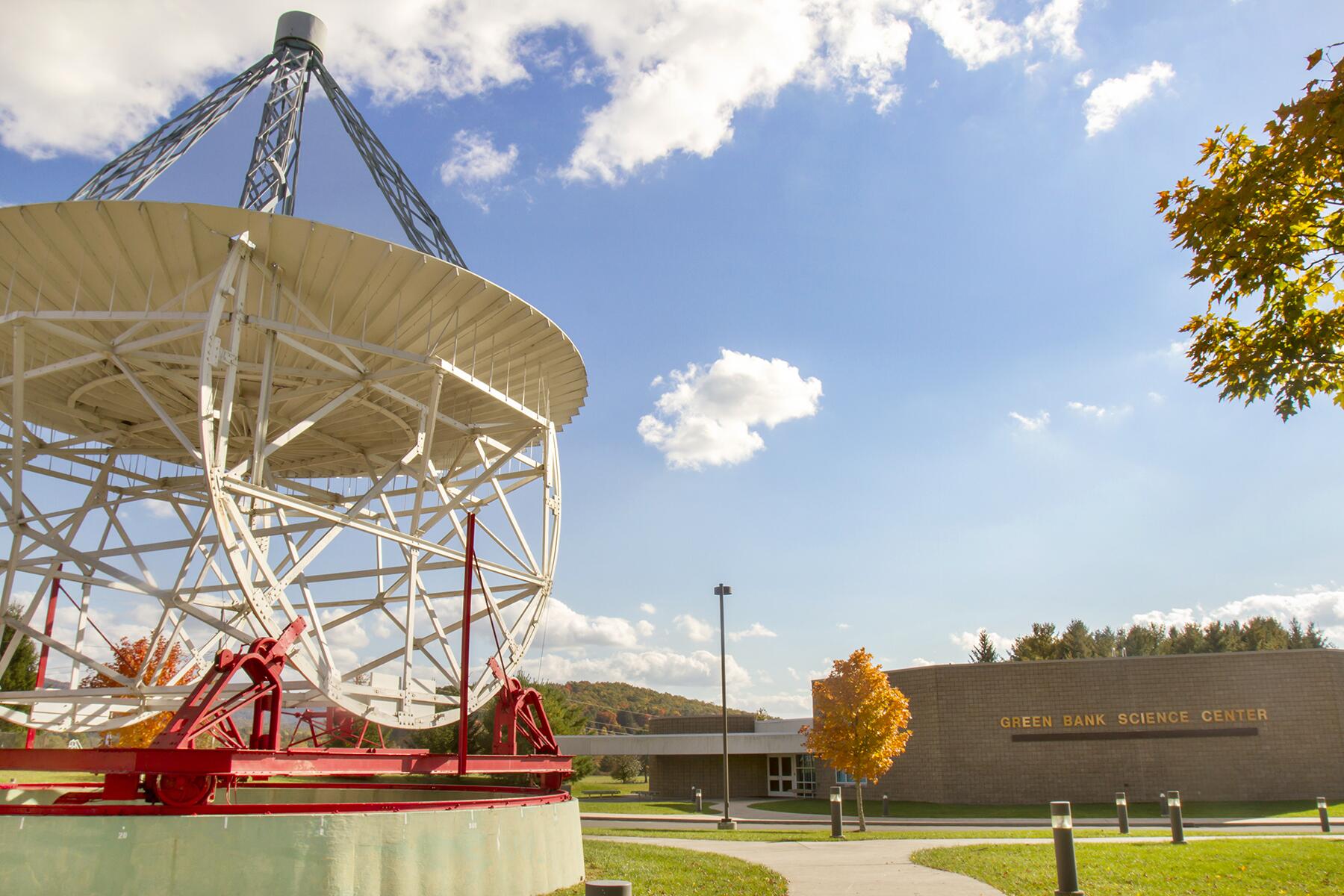 Did you know that West Virginia, a state that travelers come far and wide for such outdoor activities as hiking, kayaking, and white water rafting, is also home to the biggest steerable radio telescope on the planet? The Robert C. Byrd Green Bank Telescope, as it’s called, is located in The Green Bank Observatory in Green Bank, West Virginia. The telescope (and the observatory) are viewable via public tours where you’ll also see nifty scientific demonstrations and have a chance to check out a free exhibit onsite called “Catching the Wave Exhibit Hall” that will teach you about the history of radio astronomy in a huge (very cool) interactive room. 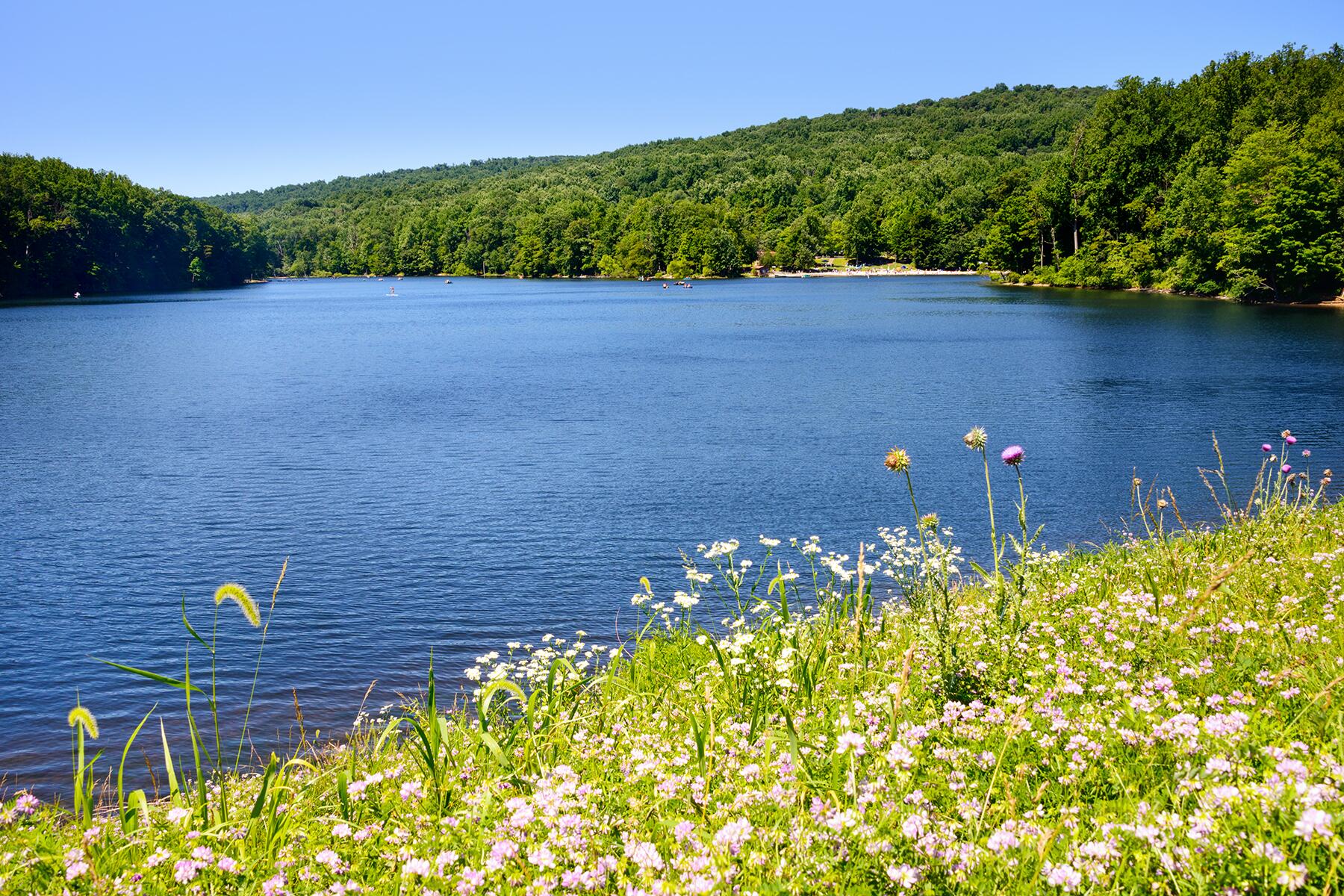 Located amongst the Catoctin Mountains in Western Maryland is Cunningham Falls State Park. It’s a beautiful, lush spot for all sorts of outdoor activity—camping, fishing, picnicking. But the feature that makes this park stand out is its eponymous waterfall. At 78-feet high, it’s the tallest cascading waterfall in the state. Visitors can make their way to the picturesque falls via a fairly easy hiking trail or a walking path. Swimming isn’t allowed at the falls, but if you’d like to cool off after your trek (and if you’re visiting during the humid summer season, that’s fairly likely!) you can take a dip in Hunting Creek Lake. 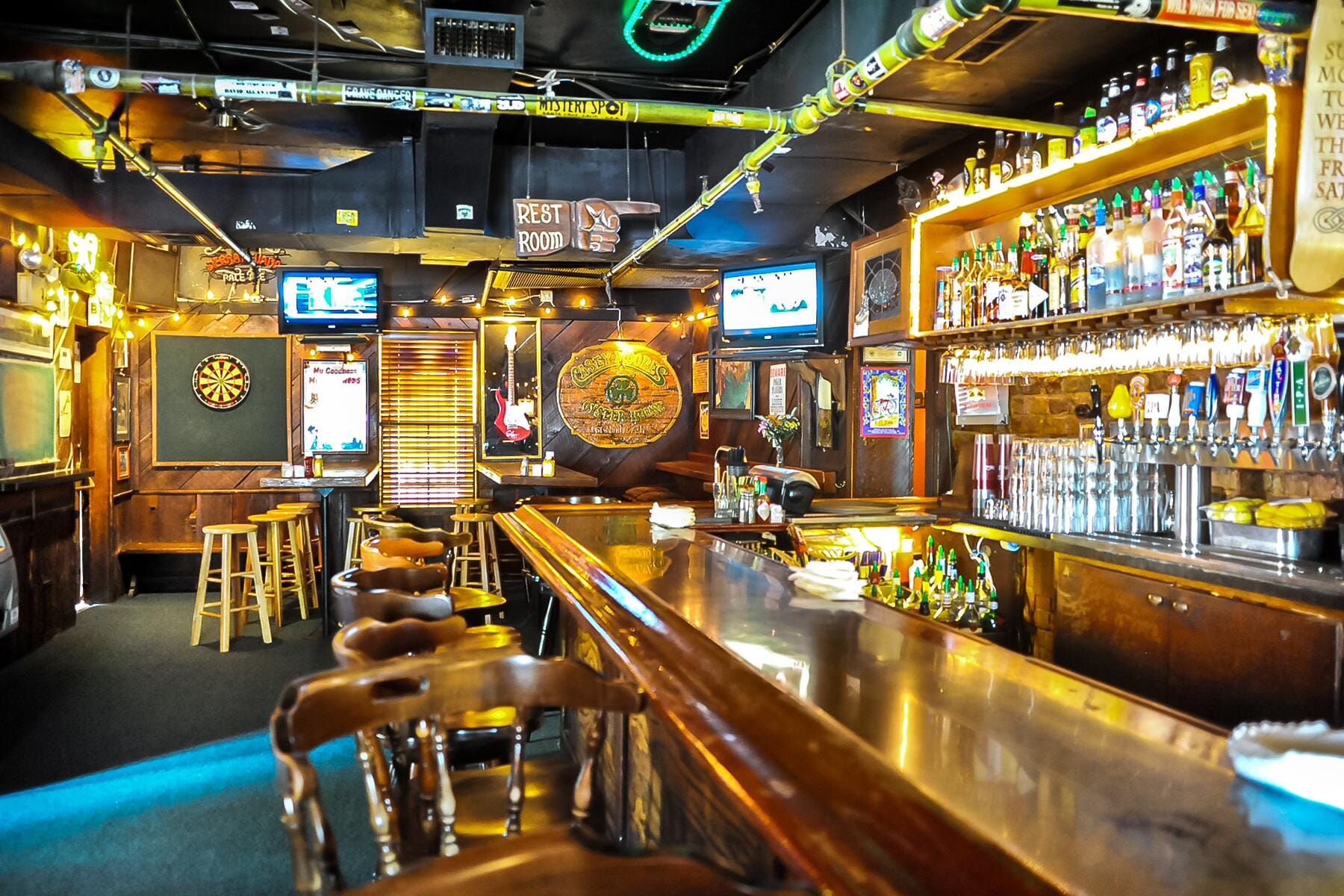 Tucked away in a green residential neighborhood at 9th and Ash near Arizona State University in Tempe, Arizona is Casey Moore’s Oyster House, a restaurant and bar that is so much more than just a restaurant and bar–it’s the most famous and beloved Irish pub in Arizona. The wooden tables are scattered about on the gigantic patio and a little koi pond is tucked in the corner. The restaurant itself is an old house. The menu is gigantic as well–they specialize in seafood and oysters, obviously, but the sandwiches, salads, and bar foods are equally as delicious. (They serve the best French onion soup I’ve personally ever tasted in my whole little life). Above all, however, it’s the atmosphere that brings a local eclectic crowd of all ages and from all walks of life back to Casey’s week after week. I miss it every day like an old friend. 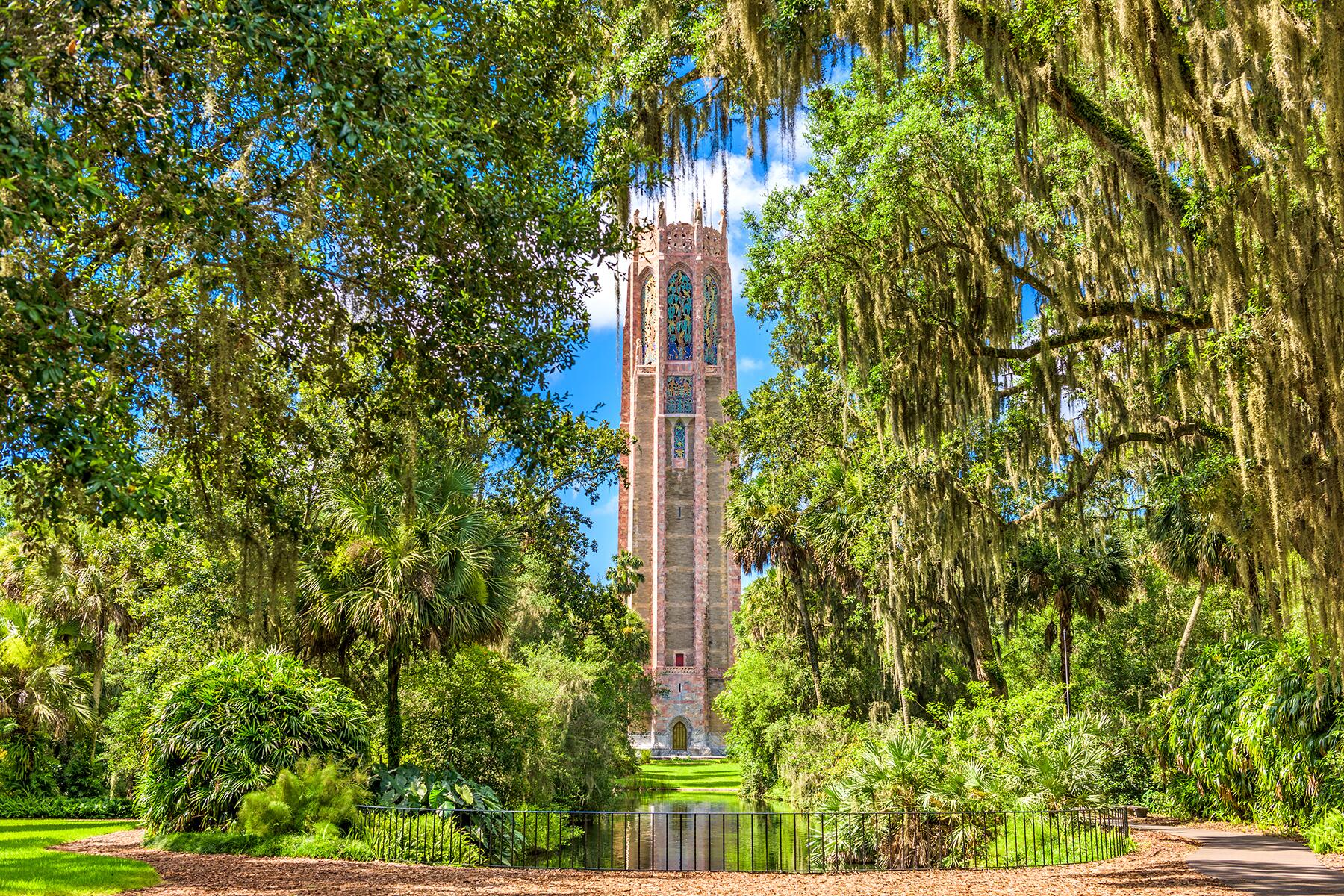 Florida is a state of strange attractions. There are mermaid shows and a giant roadside lobster called “Big Betsy.” There’s a sea sponge museum and a tropical fruit winery that proves avocado wine probably shouldn’t be a thing. But maybe the weirdest and most wonderful is Bok Tower Gardens, a fairytale garden and Gothic tower that didn’t get the memo it was being built in tiny Lake Wales, Florida, and not Rapunzel’s magical kingdom.

You could be forgiven for thinking the 200-ft tower of marble and seashells is a mirage—especially after driving along flat, monotonous U.S. 27 on a hot Florida day. But the lush garden oasis is real and surrounded by happy, sunny orange groves too. Despite, or maybe because of, their off-the-beaten-path location, the gardens’ shady pathways are a fascinating break on a road trip through central Florida, or as a day trip from Orlando or Tampa. Plus, you will never forget the “Singing Tower’s” 60 bronze bells chiming folk songs through the land of alligators and Disney World. 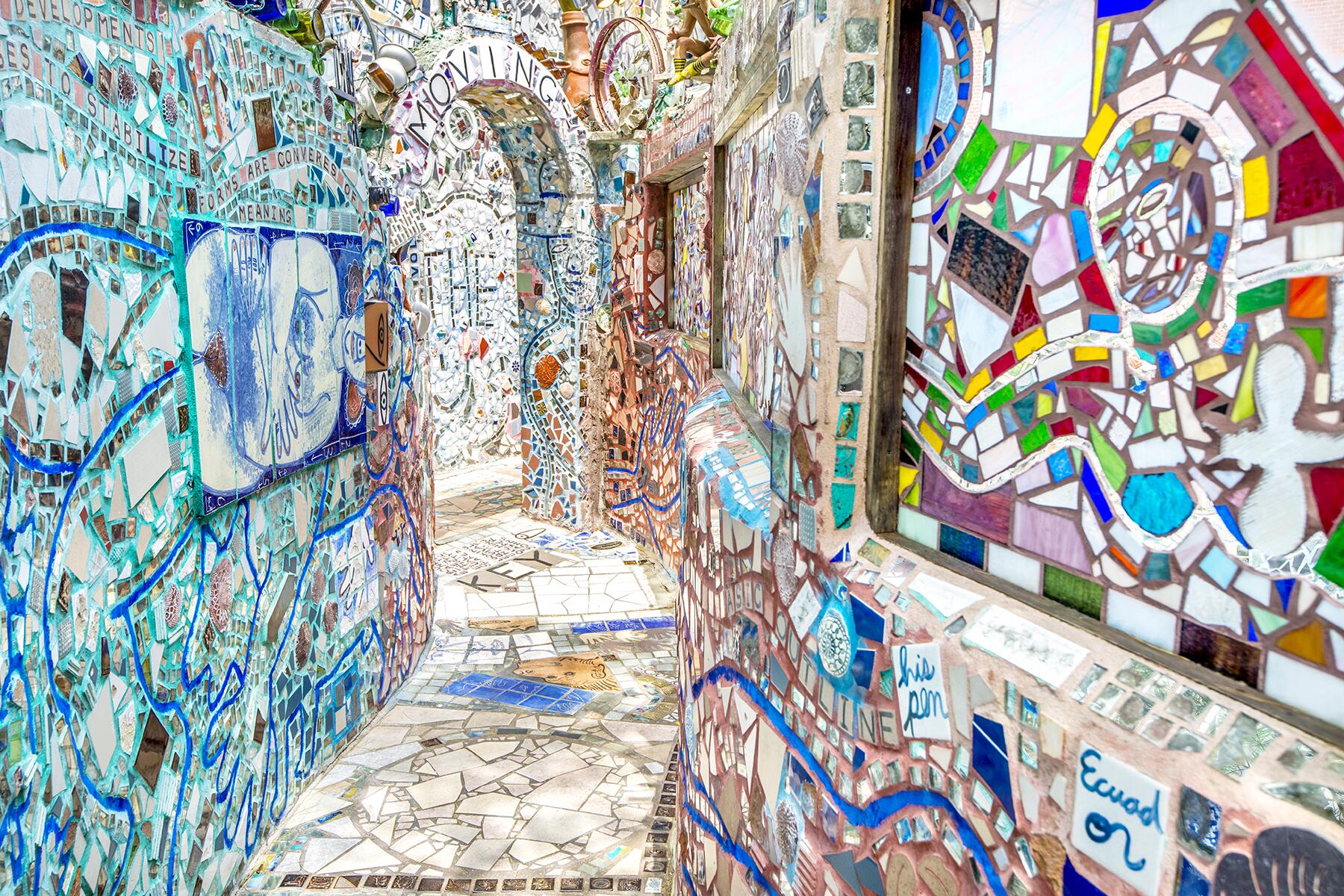 South Street is known for boutiques and bookstores, vintage shops and restaurants, cheesesteak spots, and bars. But what people might not know, is that it’s also home to Philadelphia’s Magic Gardens, a space that’s located between 10th and 11th Streets. The two indoor galleries, as well as the bi-level outdoor sculpture garden, are covered in brilliantly colorful mosaics made from handmade tiles, bottles, bicycle wheels, and pieces of mirror all of which have created tunnels, grottos, winding staircases, and walls. The project was started in the 1990s by artist Isaiah Zagar and his wife Julia who moved to South Street in the 1960s and became influential in the neighborhood’s renaissance. Keep your eyes peeled as you wander the area, and the city, as Zagar’s creations can be found on private and public walls as well as more than 15 alleyways. There are guided tours of the property, as well as the neighborhood, but the website features an interactive mural map that allows you to do your own tour. 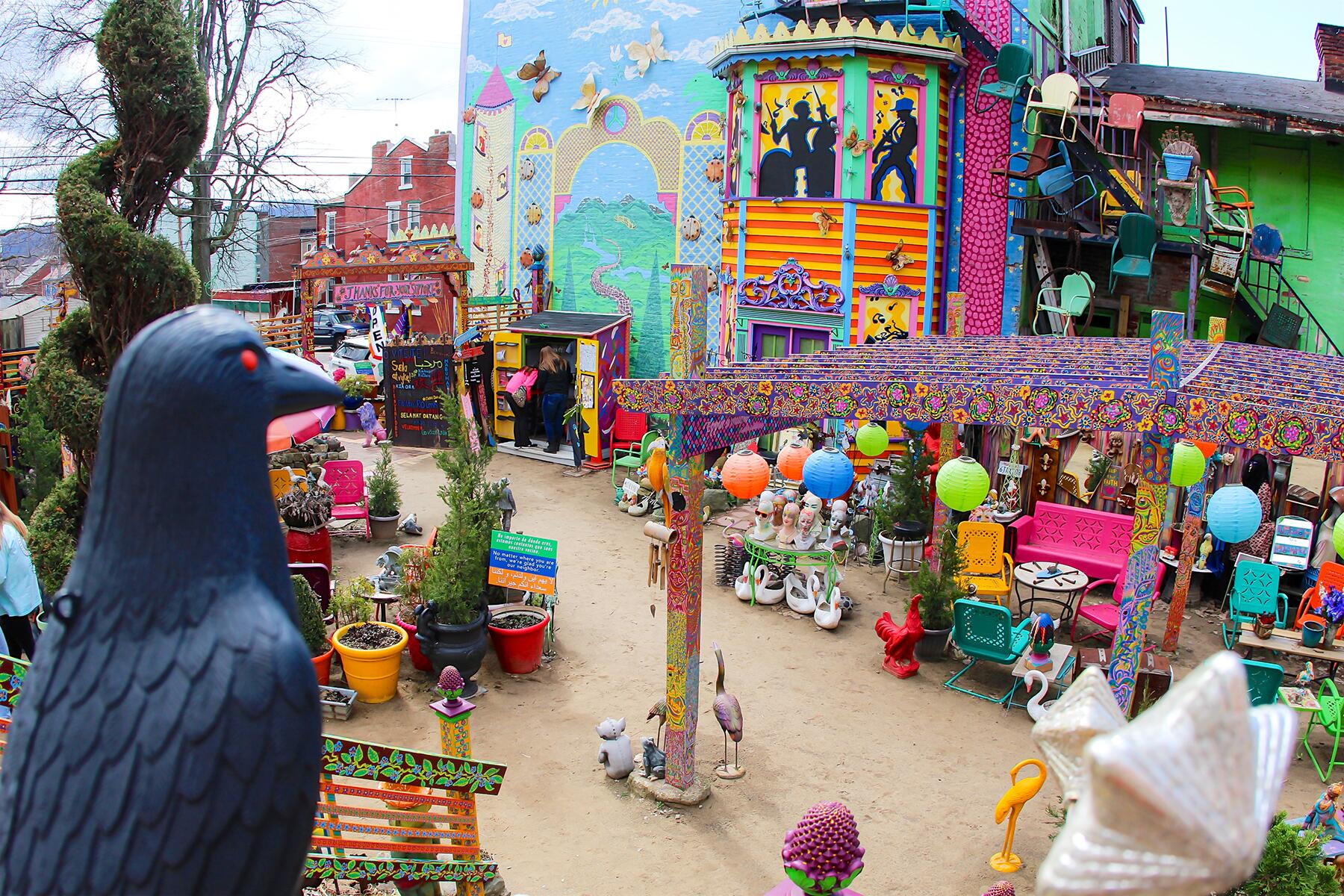 If you need a dash of color in your life, look no further than outsider art house Randyland in Pittsburgh’s Northside neighborhood. Part street art, part artifact collection, and completely a lived-in home, Randyland is owned and operated by artist Randy Gilson. Randy has every inch of the exterior of his home decorated with bright colors and neon hues. What might have once been considered junk has been repurposed on display: mannequins, plastic flamingos, old advertisements, and street signs. But Randy is a draw himself. A delightfully positive walking aphorism, Randy loves you, loves his home, loves his neighborhood, and his art. He’s happy to give you a tour and chat with you about his and the home’s history, which is a neighborhood jewel. Don’t forget to hashtag it on the ’gram. 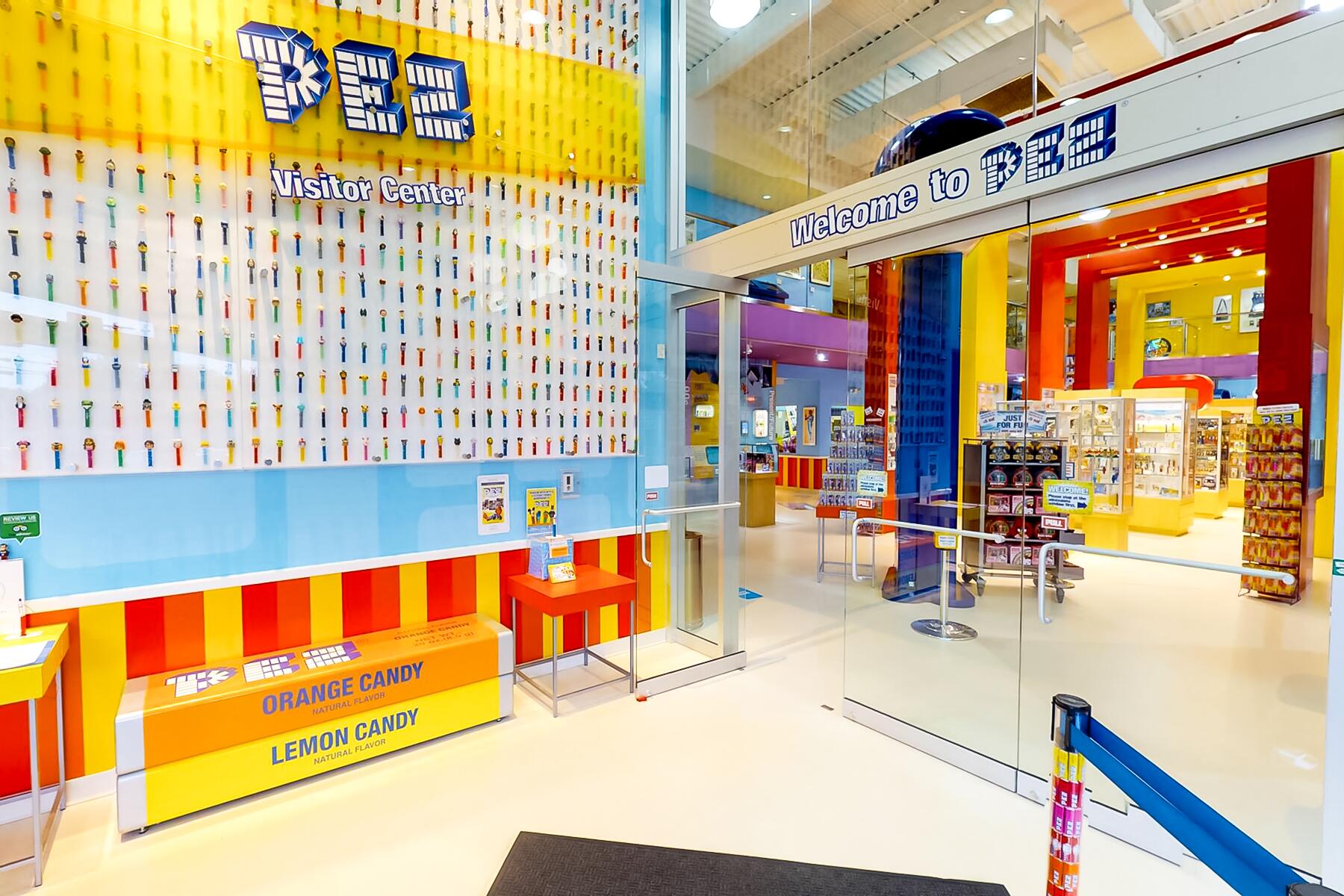 Are they candy? Are they toys? The debate rages on, but no matter what side you’re on, it’s safe to say that everyone has fond memories of PEZ. First created in 1927 in Vienna, Austria, the company now has a location in Orange, Connecticut that’s also home to the Pez Visitor Center. A perfect place for a pitstop if you’re traveling north or south on the often crowded Connecticut Turnpike (I-95), the more than 4,000 square foot space is dedicated to all things PEZ. There are interactive games (with PEZ facts) and an exhibit about the history of PEZ, as well as the world’s largest PEZ dispenser and the world’s largest, public display of PEZ memorabilia that’s curated by themes like trucks, animals, holidays, and American presidents. Visitors can peek into the production area through large viewing windows, and there’s a scavenger hunt (with a PEZ prize). There is an admissions fee, but you also get a credit towards your purchase, and you know you’re going to buy a PEZ for the drive, so win-win? 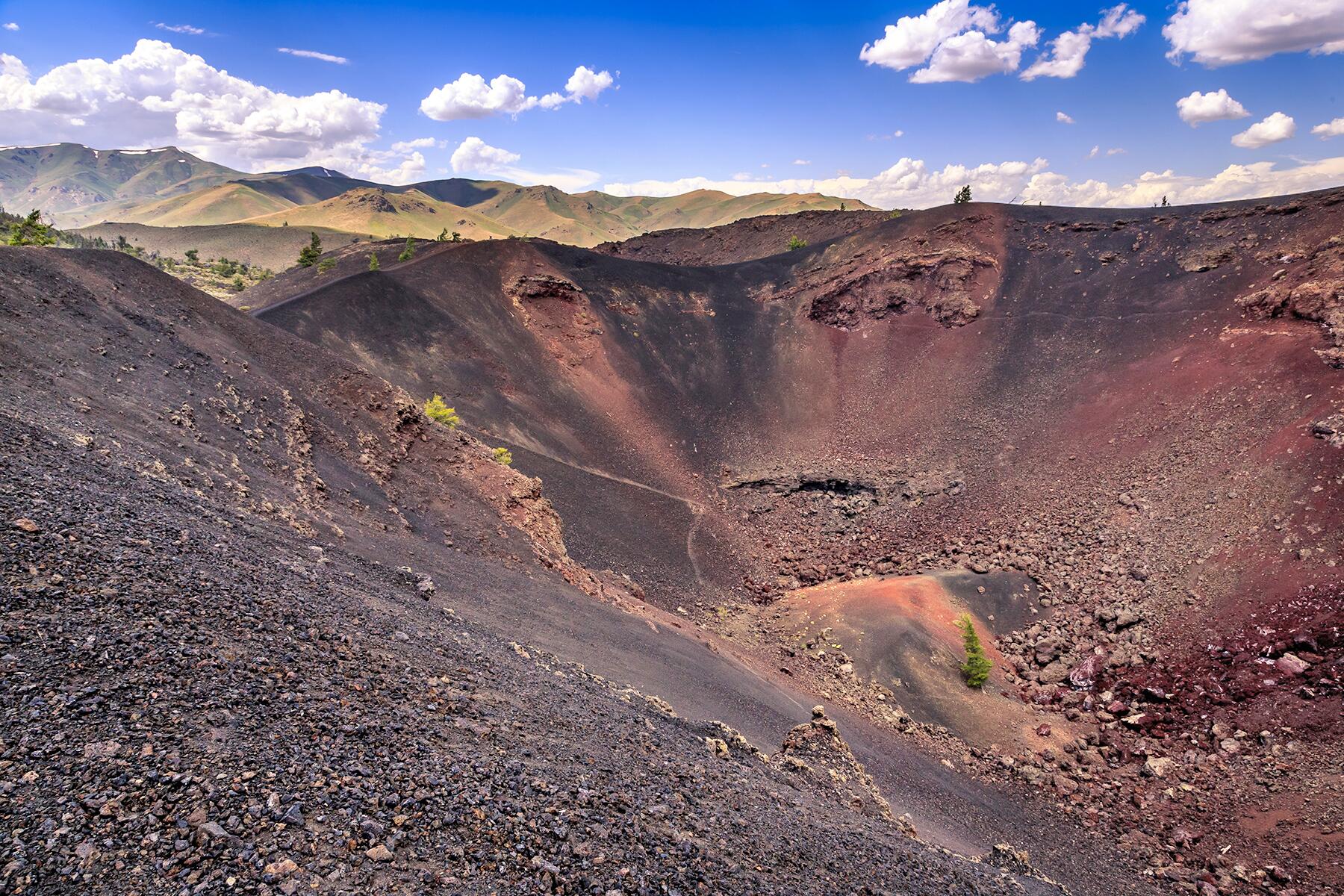 Craters of the Moon National Monument

About 15,000 years ago, a volcano erupted, spewing magma into the air and covering Southern Idaho with 400 square miles of basaltic lava. The lava hardened to create an otherworldly landscape full of uneven black rocks, lava tubes, caves, and lava cones. Craters of the Moon, though not well-know, is perhaps one of the weirdest landscapes in the US and is well worth a visit on any Idaho adventure. Trails meander through the lava fields and a few roadside attractions (including Mammoth Cave and Shoshone Ice Caves) let you do a little spelunking on your own without venturing far off State Highway 75.