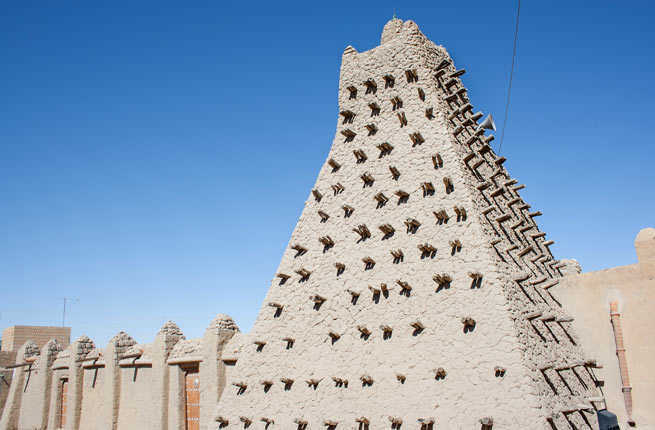 UNESCO’s List of World Heritage in Danger consists of 44 sites that face urgent threats to their integrity as spots of "outstanding universal value," ranging from environmental degradation to urbanization, overpopulation, and excessive development. These sites are not off-limits to tourists, though. In fact, for some dedicated travelers, there’s no better time to glimpse these historical world wonders before they change—or disappear—forever. Here are 15 of the sites you must see before it’s too late.

In the 15th and 16th centuries, Timbuktu was a hub of Islamic propagation in Africa and a heart of intellectual and spiritual richness. Its three great mosques, Djingareyber, Sankore, and Sidi Yahia herald the golden age of the city, but now face being lost completely to desertification and changes in the architecture and vestiges of the old city. Though they’re constantly restored, it’s worth a trip to see these important monuments while they’re still considerably dominant in their environment. 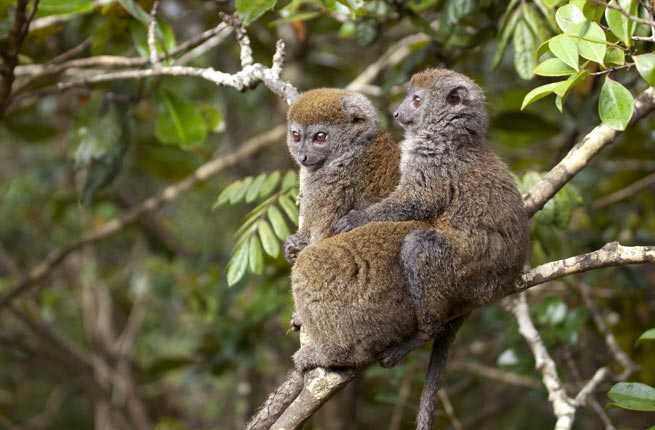 Rainforests of the Atsinanana, Madagascar

The rainforests of the Atsinanana comprise six national parks. Deforestation has left this area of eastern Madagascar with less than 10% of its original forests and the remaining forests are critically important to maintain the island’s biodiversity. Atsinanana forests contain many threatened animal species, especially lemurs and Malagasy primates, along with thousands of endemic plant varieties that exist only on Madagascar. 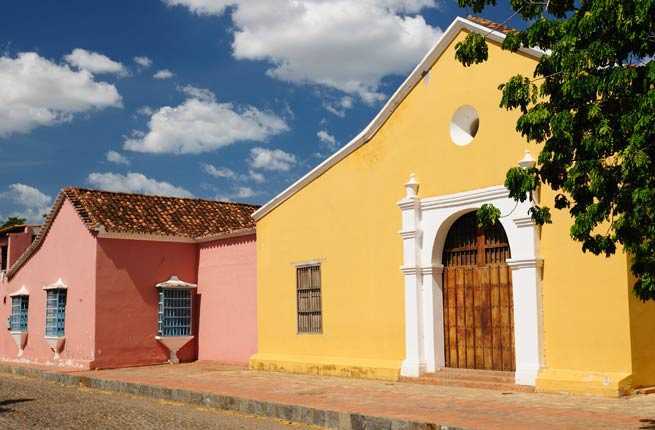 Founded in 1527 by a Spanish expeditionary team, Coro is the only surviving example of a town built with a style of earthen buildings unique to the Caribbean. More than 600 such buildings exist, fusing Spanish Spanish Mudéjar and Dutch architectural techniques. Present-day expansion in the city is threatening these architectural relics. 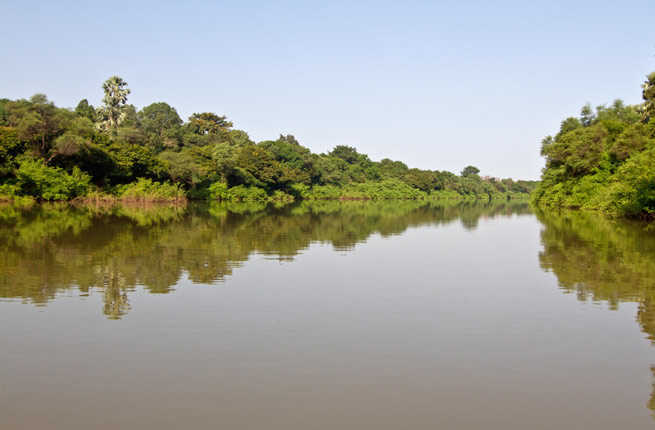 Fauna in the fertile gallery forests and savannahs of Niokolo-Koba National Park include Derby elands (largest of the antelopes), chimpanzees, lions, leopards, and a large population of elephants, along with many birds, reptiles, and amphibians. But this area on the banks of the Gambia River is threatened by elephant poachers, desertification, population growth, and building proposals for ecologically dangerous dams, among other things. Boasting Africa‘s largest lions and antelopes, as well as many endangered species, the park is worth a visit especially for safari purposes—some of these animals might disappear completely someday. 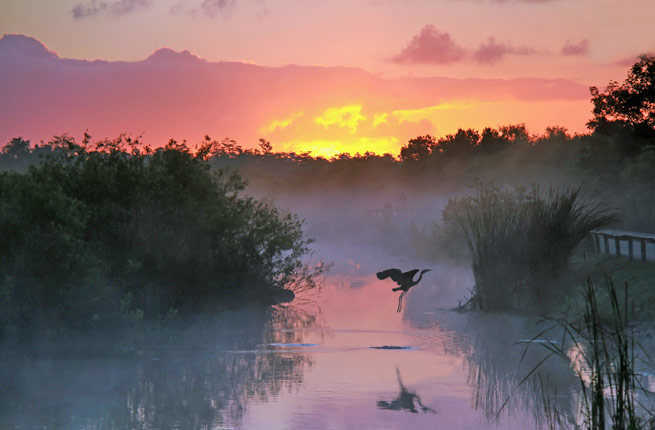 This "river of grass flowing imperceptibly from the hinterland into the sea" was submerged at the end of the last Ice Age. Now it stretches from the southern tip of Florida along the Gulf of Mexico, where its complex water habitats have made it a sanctuary for many birds, reptiles, and endangered species such as the manatee. Its mixture of subtropical and temperate wildlife is found nowhere else in the U.S, and it contains 200 archeological sites. "Serious and continuing degradation of its aquatic ecosystem" has landed the"> on the Danger list, so pay a respectful visit soon before further species and habitats of the area are compromised. 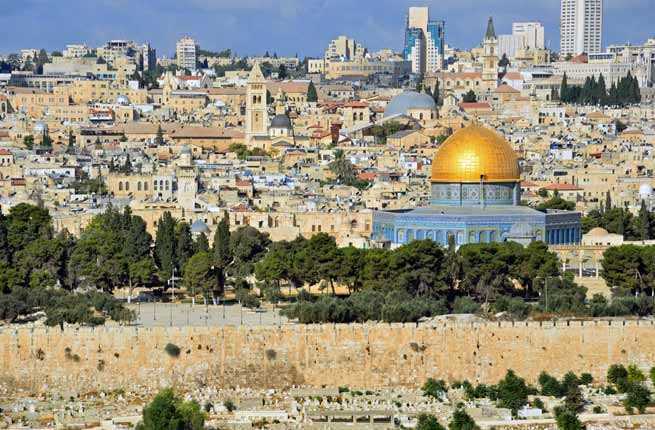 Old City of Jerusalem and its Walls

Judaism, Christianity, and Islam all call Jerusalem their holy city. With 220 historic monuments, the circa-7th century Dome of the Rock, the site of Abraham’s sacrifice, stands out for its beautiful geometric and floral motifs. The Resurrection rotunda in the Church of the Holy Sepulchre houses Christ’s tomb, while the Wailing Wall delineates the various religious communities. The ancient city in Israel has been on the Danger list since 1982, when Middle Eastern tensions and urbanizations became urgent threats to the site’s integrity. 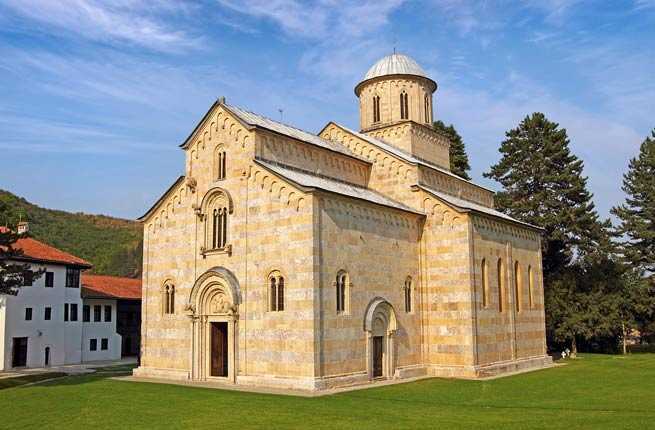 Byzantine-Romanesque ecclesiastical culture is reflected magnificently in the distinctive wall paintings of Kosovo’s 14th-century Decani Monastery, Pec Monastery, and the 13th-century monumental frescoes of the Church of Holy Apostles. The early 14th-century frescoes in the church of the Holy Virgin of Ljevisa represent the collision of eastern Orthodox Byzantine influence and Western Romanesque traditions. Heavy political conflict in the Balkan region in recent decades threatens the monuments, and Serbia is working closely with UNESCO, the UN Mission to Kosovo, and the Provisional Institutions of Self-Government in Kosovo to care for the site. 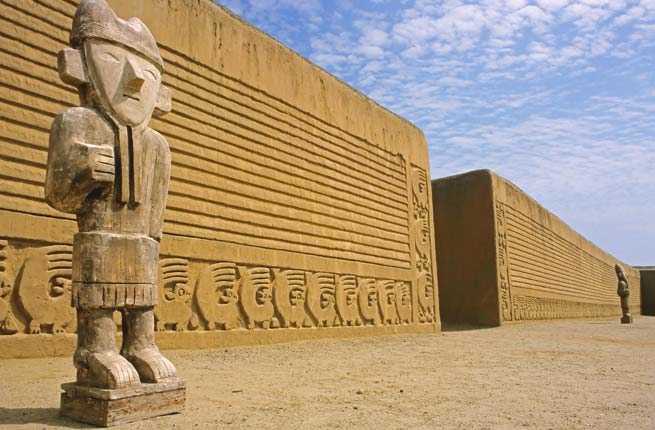 Before it fell to the Incas in the 15th century, the Chimu Kingdom had Chan Chan as its capital. The vast city was the largest in pre-Columbian America, and its strategic planning is a fascinating testament to the strict political and social system. Nine citadels or palaces divide the city into nine autonomous units, whose industrial, agricultural, and water management systems are remarkably preserved in its remains. Encroaching urban development, illegal farming practices, and continual El Niño-caused environmental decay threaten this intricate, ancient site in Peru. 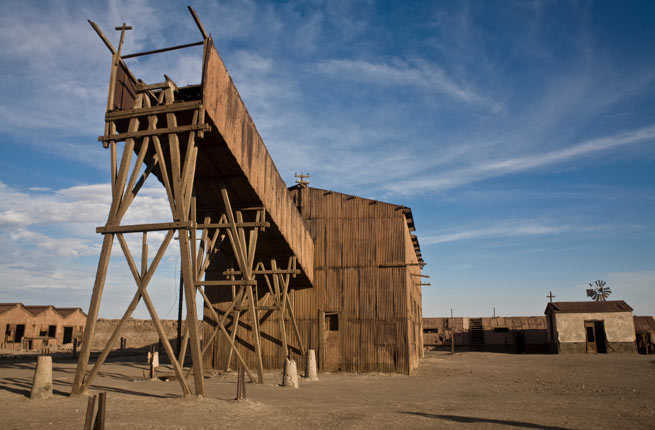 The vast Pampas desert of northern Chile contains some 200 saltpeter works—mines where potassium nitrate was harvested from a large deposit of this naturally occurring mineral. From the 1880s, for more than 60 years, thousands of pampinos (saltpeter workers and their families) lived in communities around the mines, in the inhospitable desert. The remaining structures have been exposed to extreme temperatures and also looted for reusable materials—timber frames, corrugated iron roofs—in the ensuing decades. These structures are in need of conservation support if the material legacy of the pampinos is to continue. 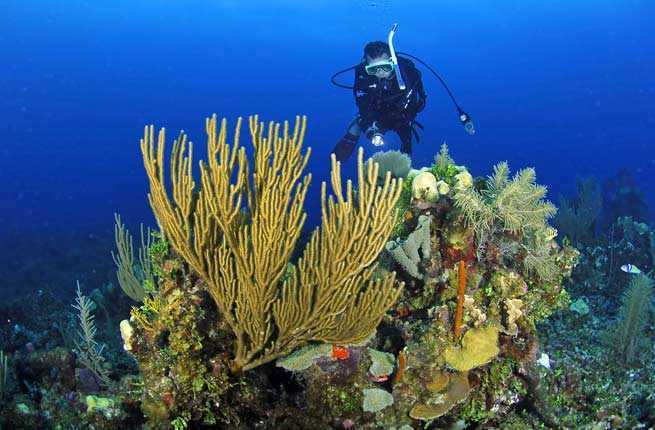 Courtesy of Luiz A. Rocha/Shutterstock

The largest barrier reef in the northern hemisphere makes its home in the outstanding natural system of coastal Belize, where offshore atolls, hundreds of sand cays, mangrove forests, coastal lagoons, and estuaries are also found. The system comprises seven sites, each of which illustrate the evolutionary history of reef development and host a rich population of endangered species like marine turtles, manatees, and the American marine crocodile. Mangrove cutting and excessive development threaten the system, and have landed it on the Danger list since 2009. 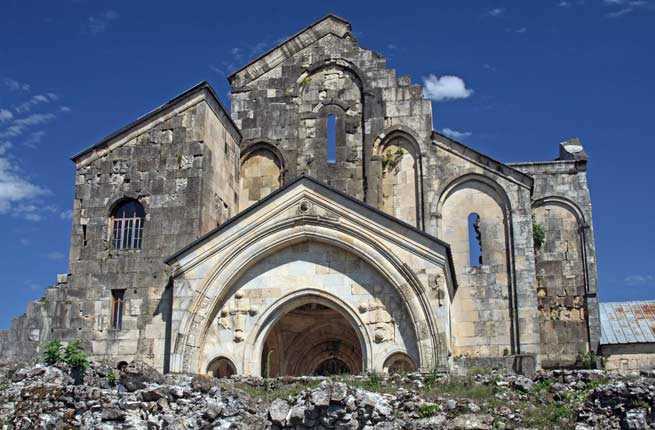 These monuments represent the flourishing of medieval architecture in Georgia. The ruins of Bagrati Cathedral, completed in the early 11th century, lie in the center of Kutaisi atop a winding stairway. The Gelati Monastery, with its colorful mosaics and wall paintings, was erected in the 12th and 17th centuries as a religious, scientific, and educational center, and remains well preserved. Concerns about the impact of irreversible interventions carried out on the site as part of a major reconstruction project landed the site on the Danger list in 2010. 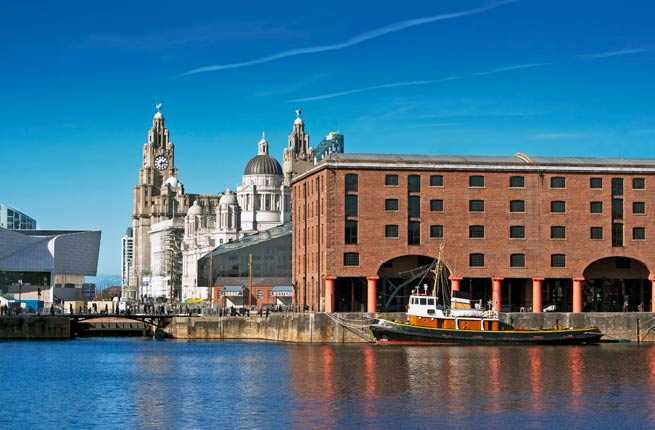 Liverpool‘s influence on the global economy went way beyond birthing the Beatles. The maritime mercantile city’s historic docklands played a major role in the growth of the British Empire and became a major port of transit, and it was a pioneer in modern dock technology, transport, and port management. Now, a massive redevelopment construction called Liverpool Waters threatens the historic docklands. Visit soon and experience the European Union’s 2008 "Capital of Culture" while you can, in case the face of the docklands is changed for good. 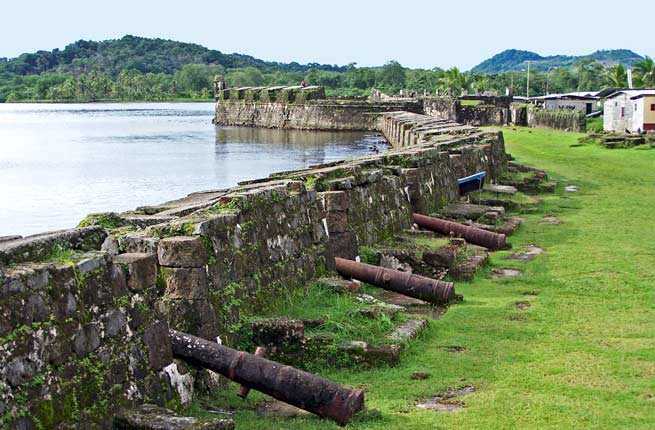 Fortifications on the Caribbean Side of Panama: Portobelo-San Lorenzo, Panama

These 17th- and 18th-century Panamanian forts on the historic sites of Portobelo and San Lorenzo, along the Chagres River, are prime examples of Spanish colonial architecture. These two sites were significant defense points to protect transatlantic trade between Spain and its New World colonies, and was Panama’s main inter-ocean trade route until the 1850s. The site has been abandoned since the mid-1800s, and is in need of conservation. 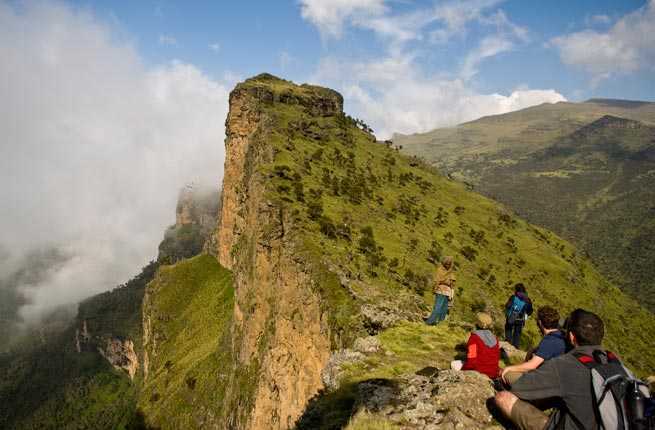 The jagged mountain peaks, plunging valleys, and needly precipices of the weather-ravaged Ethiopian plateau house extremely rare animals like the Gelada baboon, the Simien fox, and the Walia ibex (a goat found nowhere else in the world). The spectacular vistas offered in Simien National Park rival the Grand Canyon’s. But everything from human settlement, cultivation and soil erosion, frequent forest fires, and excessive numbers of domestic stock now threatens the property, which was established in a human-inhabited area. It’s been on the Danger list since 1996, so pay a visit soon. 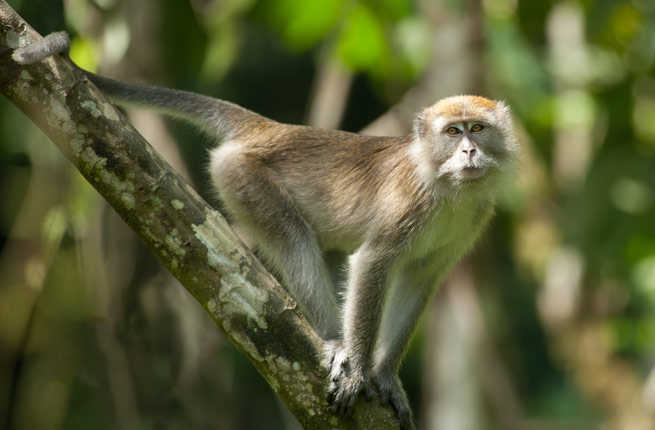 Three national parks comprise Sumatra’s 2.5 million hectare Tropical Rainforest Heritage, which holds the greatest potential for long-term conservation of the distinctive, diverse flora and fauna of Sumatra, including many endangered species. Approximately 10,000 plant species, more than 200 mammal species, and some 480 bird species call the site home. Biogeographic evidence of the island’s evolution is also contained there, along with outstanding volcanoes, glacial lakes, fumaroles, waterfalls, and caves. The sites are the isolated remnants of a once-vast tropical rainforest island, which in the span of 50 years has been reduced significantly due to poaching, illegal logging, and agricultural encroachment, landing it on the Danger list in 2011.