Yes, you can (and should!) go to this land in limbo.

Where the Black Sea meets the lush foothills of the lower Caucasus, there’s a swath of land called Abkhazia that, according to the U.S. Department of State, is too dangerous to visit.  Formerly the crown jewel of the Russian Riviera—that stretch of ragtag resorts frequented by the Soviet elite—Abkhazia was once prized for its fine-sand beaches, subtropical flora, and misty mountain towns. But in the wake of a bloody war in the 1990s, a controversial declaration of independence, and ensuing instability, the international community either condemned Abkhazia or, worse, forgot about it altogether.

But let’s not psych ourselves out. It’s been a quarter-century since the nadir of the Abkhaz-Georgian conflict and nearly a decade since the last significant period of unrest. Today Abkhazia may be a skeleton of its Soviet self, but that doesn’t make it unsafe or unworthy of a visit, regardless of your politics. Whether you’re a thrill-seeker who relishes elusive locales, an architecture buff with a predilection for time-warpy Stalinist designs, or a recipe hunter keen to uncover unsung cuisines, here’s what you should know before adding Abkhazia to your Caucasian itinerary. 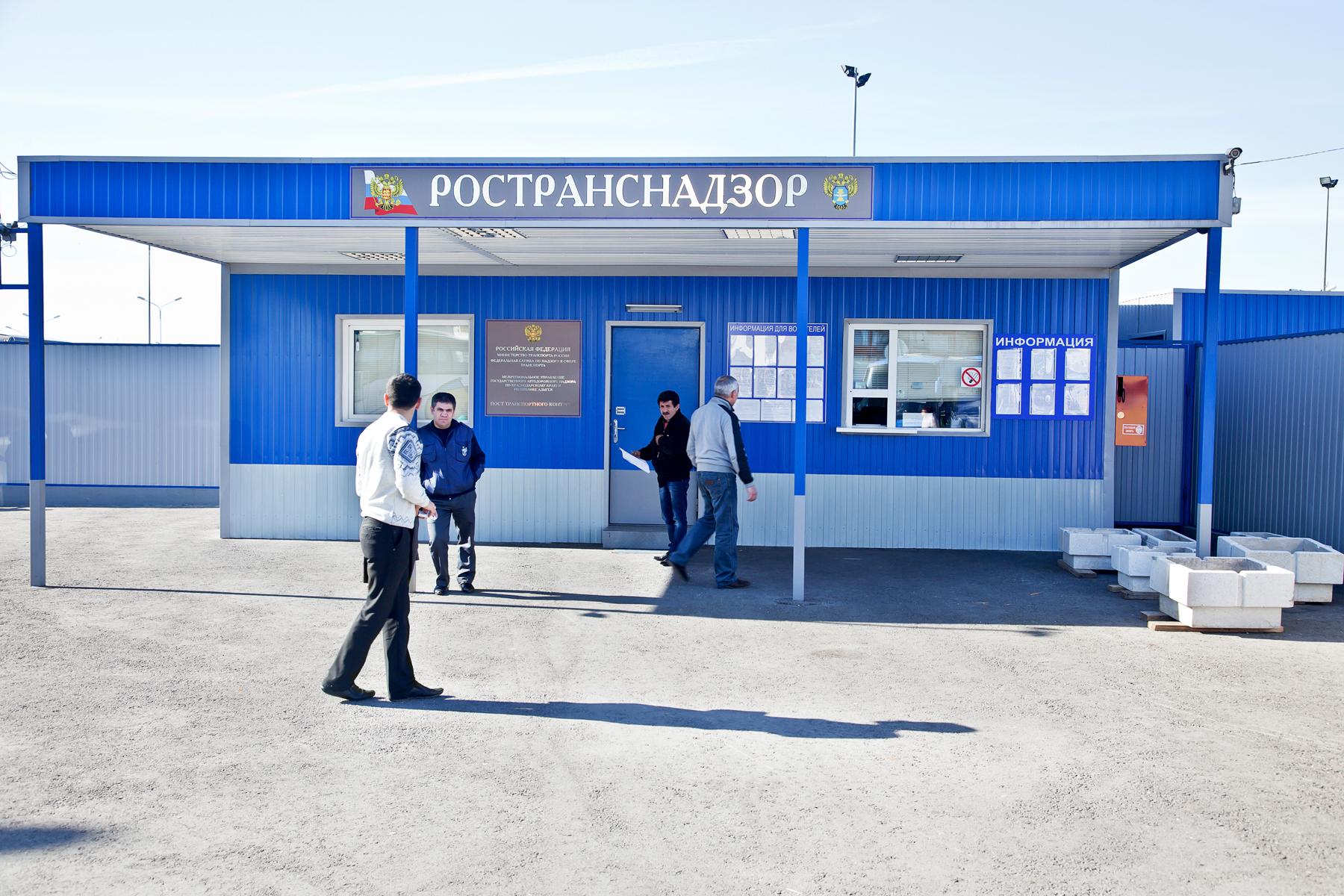 Yes, You Can Go

As long as your passport isn’t Georgian, you’re eligible to apply for a visa to visit Abkhazia. The process is painless: You fill out an online form (here), pay a fee of 350 roubles (about $6), and within two weeks, a printable visa lands in your inbox. Unless you have a Russian visa, you’ll want to enter Abkhazia from Georgia. Before arriving, read up on the bizarre crossing procedure so you’re not caught off guard by the anachronistic horse-drawn carriages, occasionally prying questions by border officials, or multiple security checkpoints (Georgian, Abkhaz, and Russian). Alternatively, save yourself potential bureaucratic headaches by booking a private group tour. Those offered by Regent Holidays and Caucasus Explorer are particularly excellent. 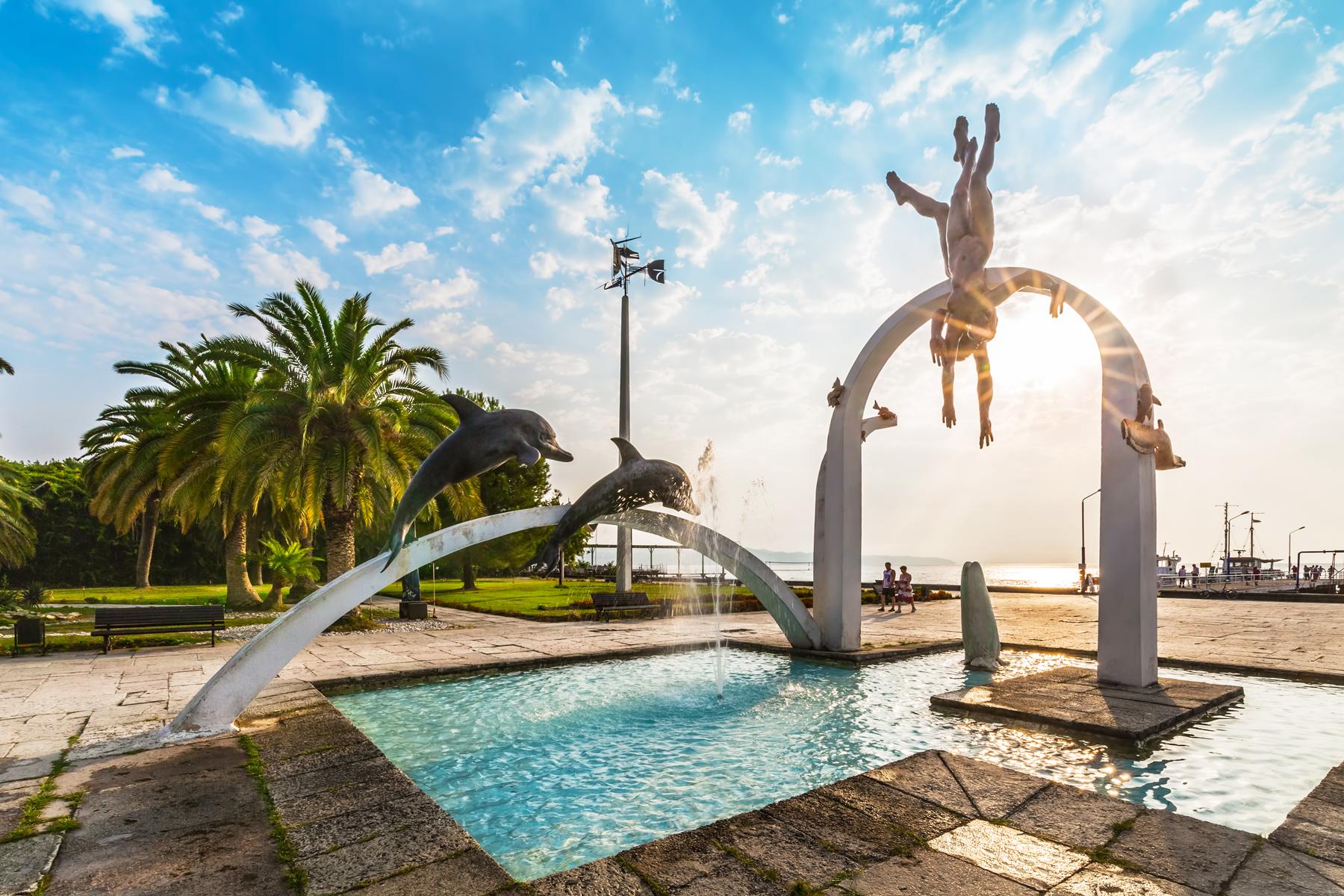 It’s Safe for the Most Part

The Department of State cites “civil unrest, crime, and landmines” as reasons to avoid traveling to Abkhazia, so let’s break those concerns down one by one. Sure, there are bouts of minor civil unrest in Abkhazia, particularly if the republic is in the throes of a contentious election. Before visiting, do a quick web search to ensure Abkhazia isn’t in the news for the wrong reasons. In 2009, for instance, tensions rose between Georgia and Abkhazia over the seizure of an Abkhazia-bound cargo ship that violated a sea blockade. That particular dispute never led to any violence, but it’s best to postpone your trip to Abkhazia in periods of political friction.

Lastly, landmines pose no real threat to tourists because, according to the HALO Trust, a nonprofit organization specializing in post-war cleanup, there aren’t any left as of 2012. 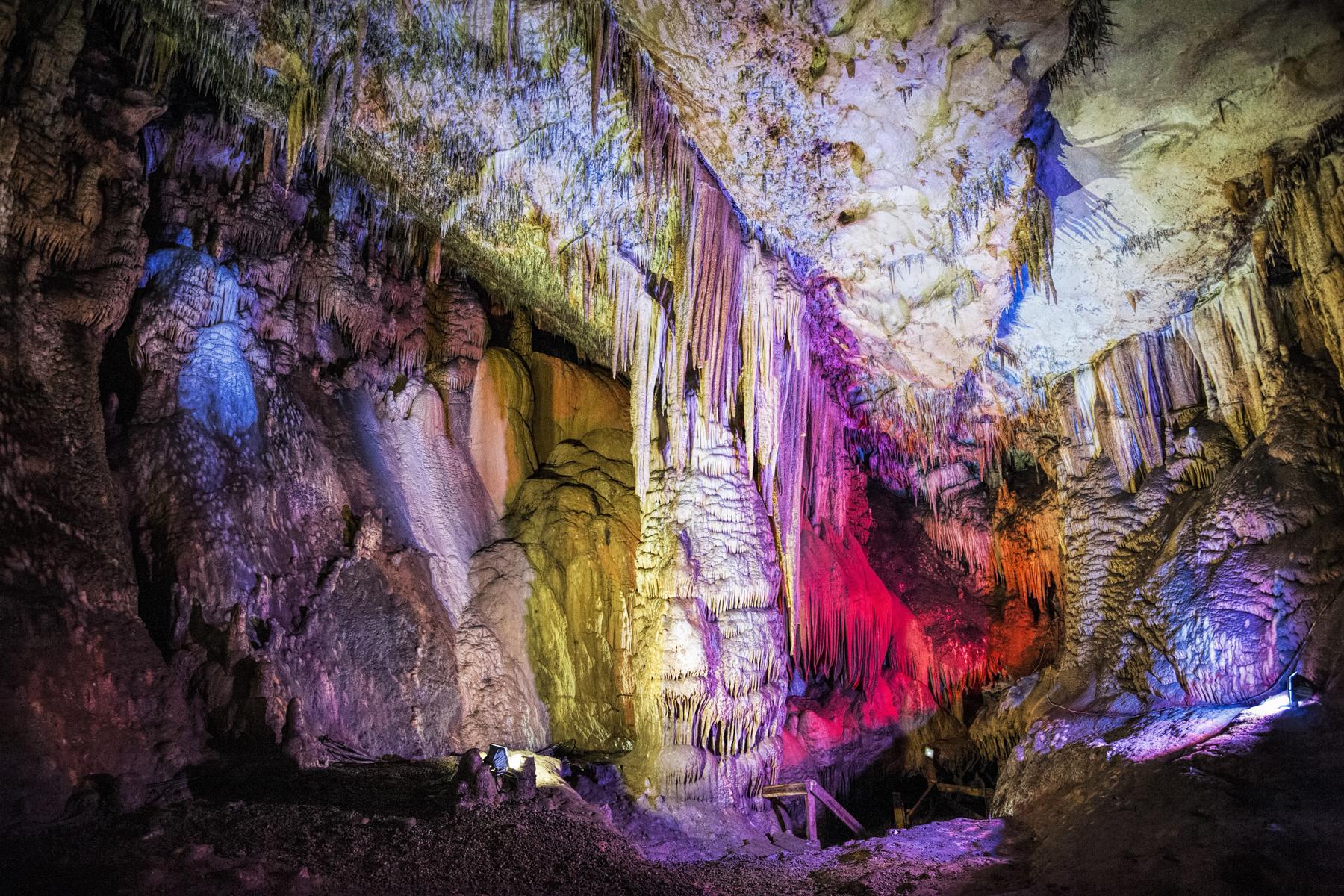 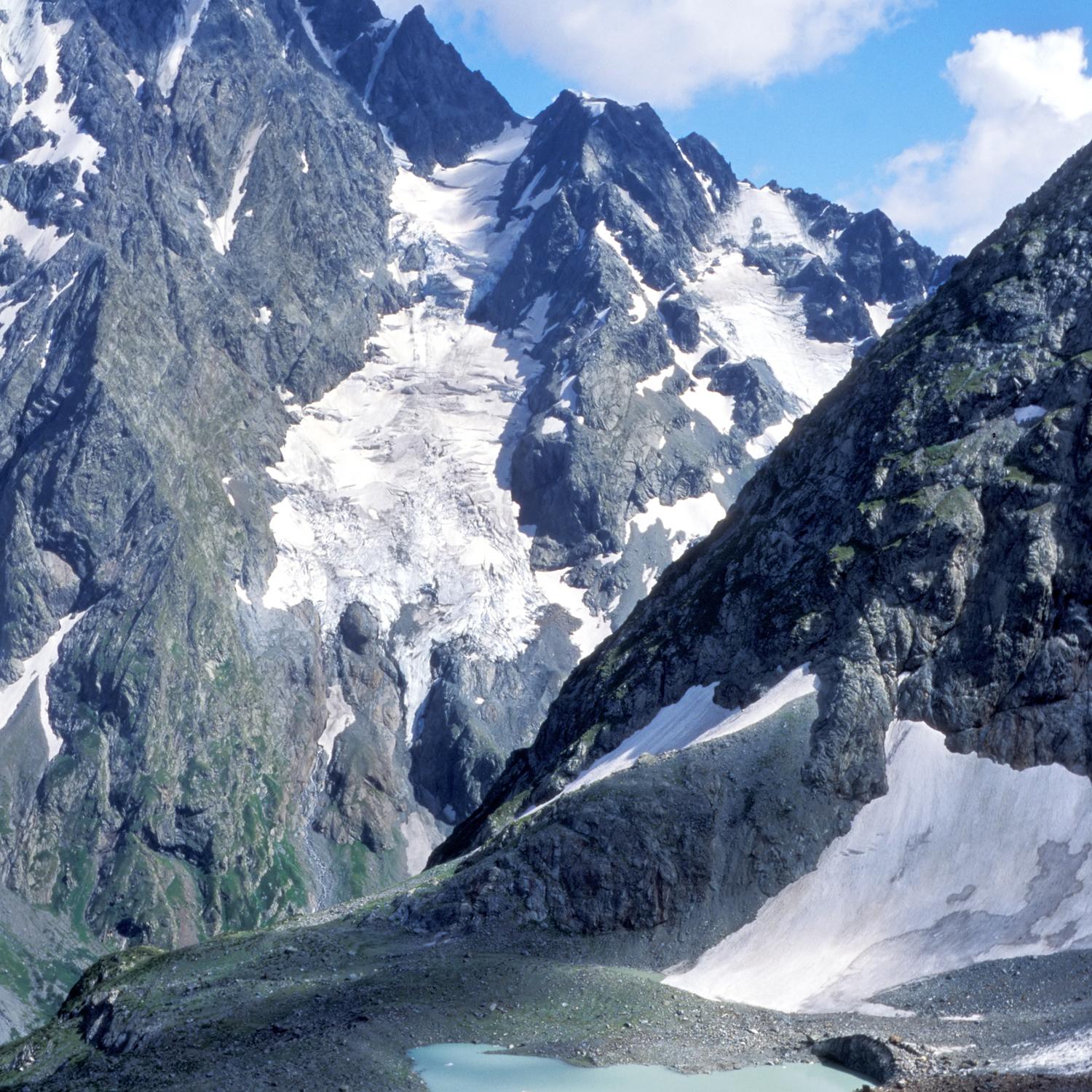 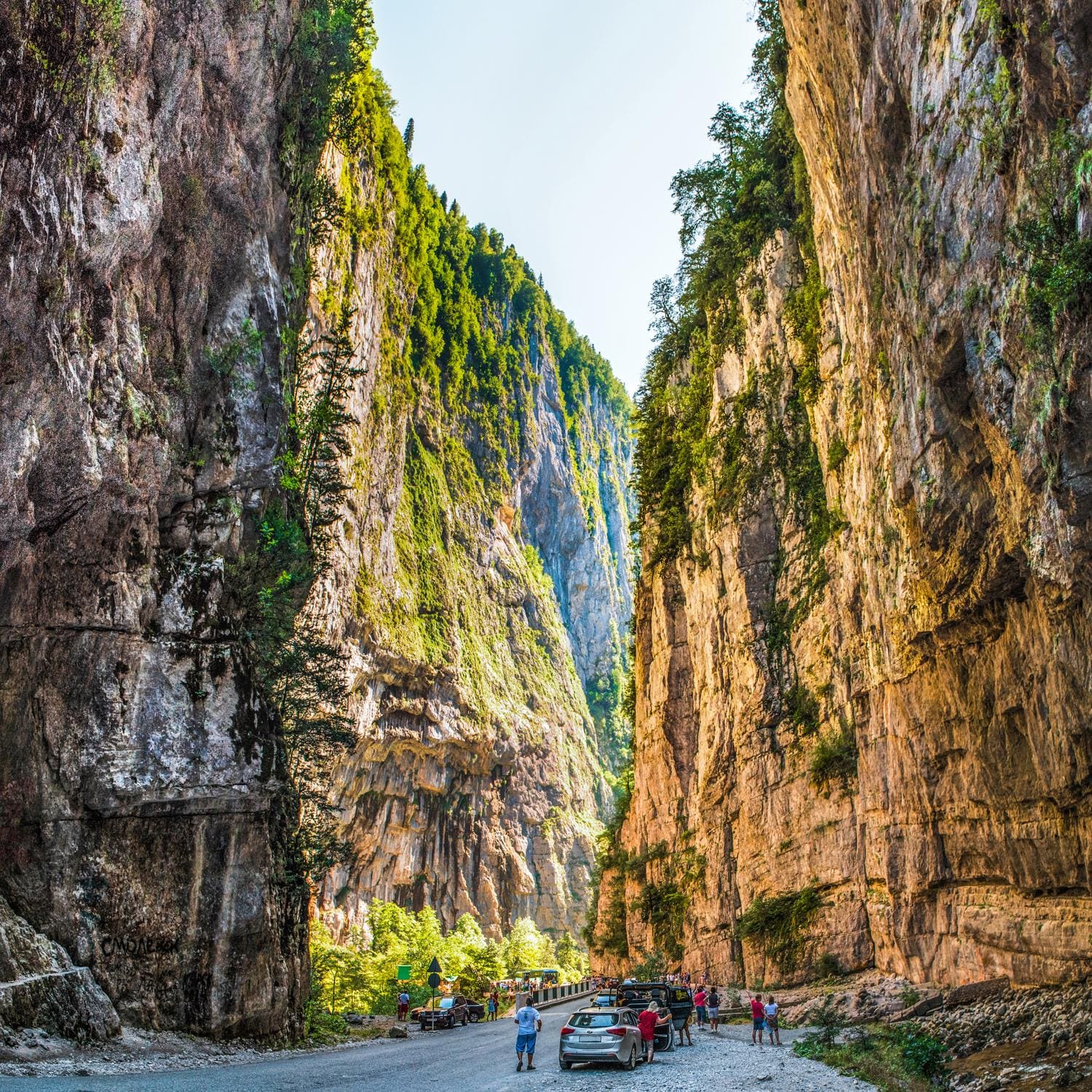 PHOTO: Alekseisazonov | Dreamstime.com
Previous Next
3 OF 12

For a territory the size of Rhode Island, Abkhazia boasts an extraordinarily diverse climate. In the north, the glaciated peaks of the Caucasus loom large on the horizon with some surpassing 13,000 feet. Along the coast, there are subtropical citrus groves, dewy meadows, and lush forests. Abkhazia also happens to be a speleologist paradise with some of the world’s most remarkable caves; it’s believed that Krubera, in Gagra, is earth’s deepest. The more accessible New Athos cave—located downhill from the breathtaking seaside monastery bearing the same name—is embedded so far into a mountainside that you need to take an underground tramway to access it. As you walk through the dim-lit caverns, mournful Abkhaz music echoes over the speakers. 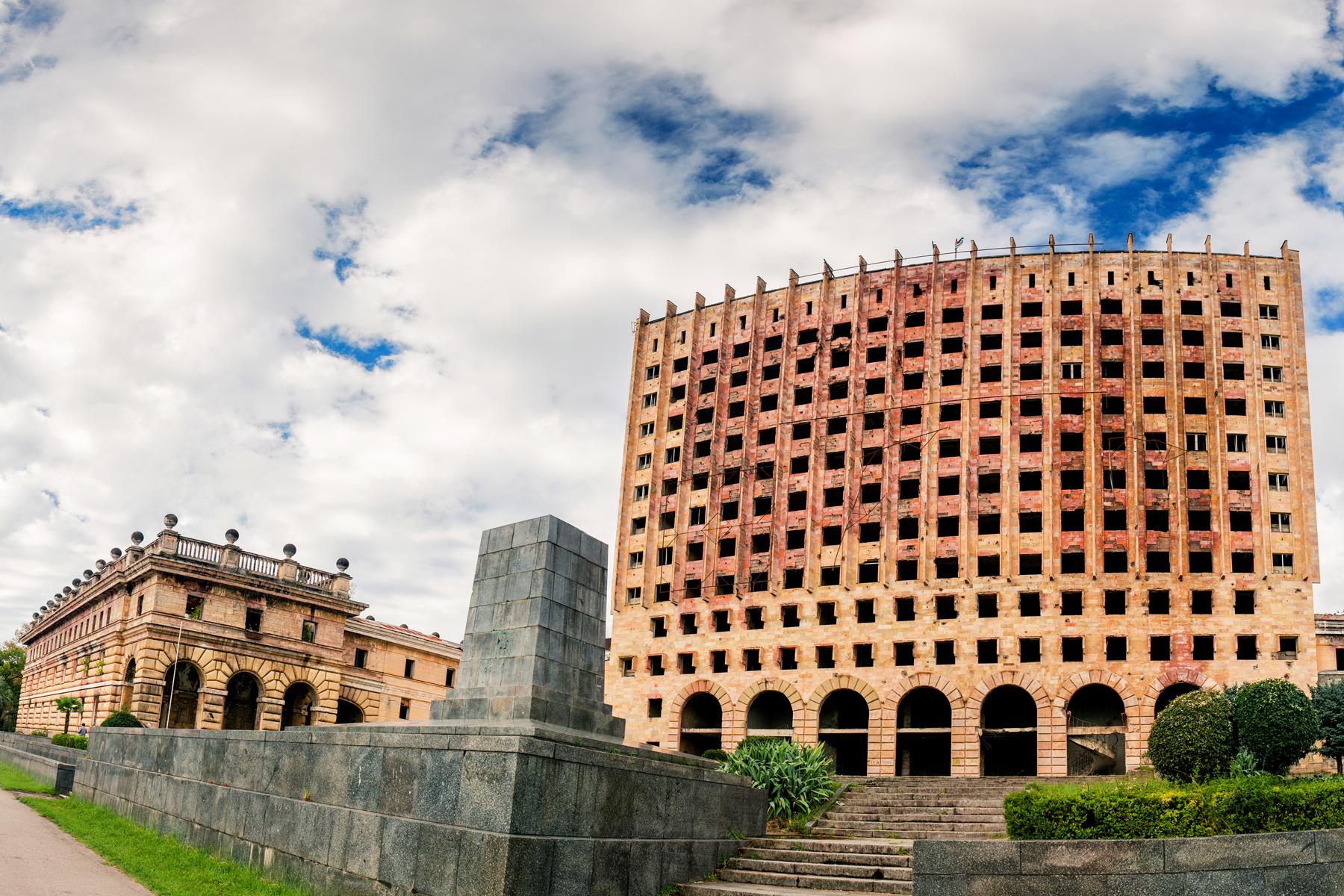 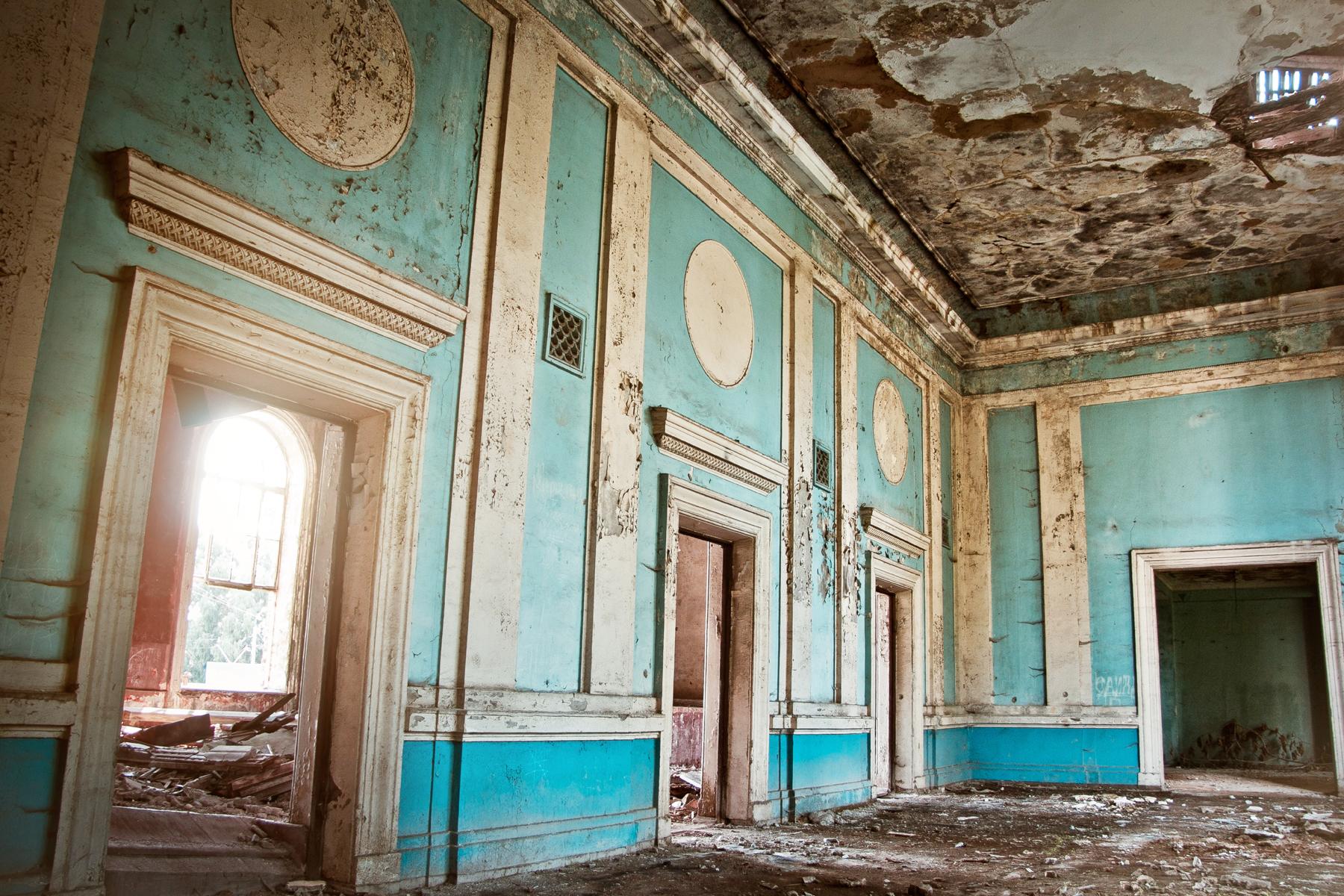 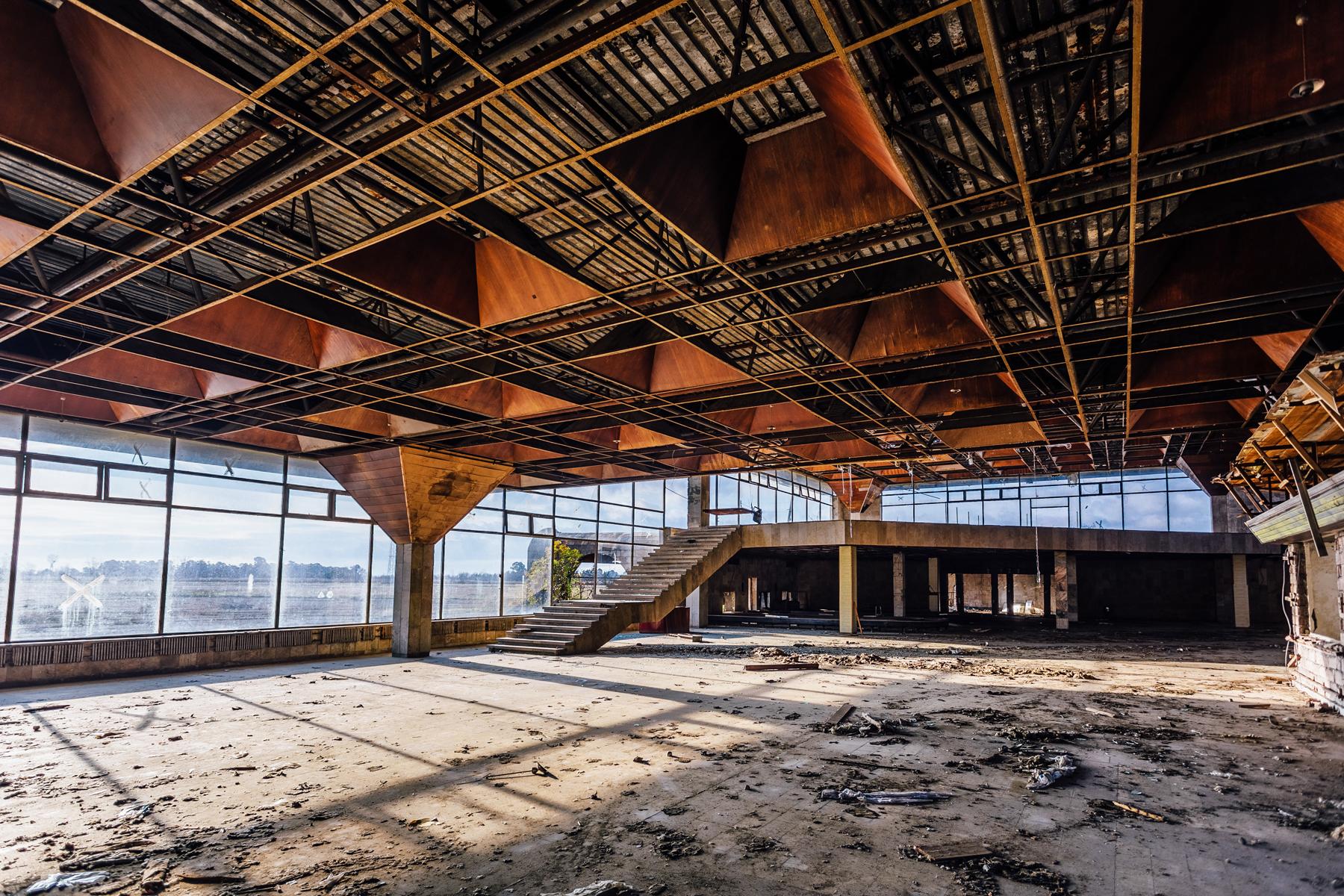 The 1992-1993 war left most of Abkhazia in ruin. Even today, derelict, windowless buildings are more rule than exception, and their presence lends a bleakness to the landscape that’s hard to shake. You’ll catch glimpses of Abkhazia’s erstwhile grandeur along the boardwalk in Sukhum, whose lampposts and esplanade date back to Soviet times, and you’ll undoubtedly swallow hard when you arrive at the city’s abandoned parliament, a somber 12-story megalith of lightless rooms and flame-licked brick. Less-traumatic reminders of the republic’s pre-war past can be found in its flamboyantly designed bus stops. 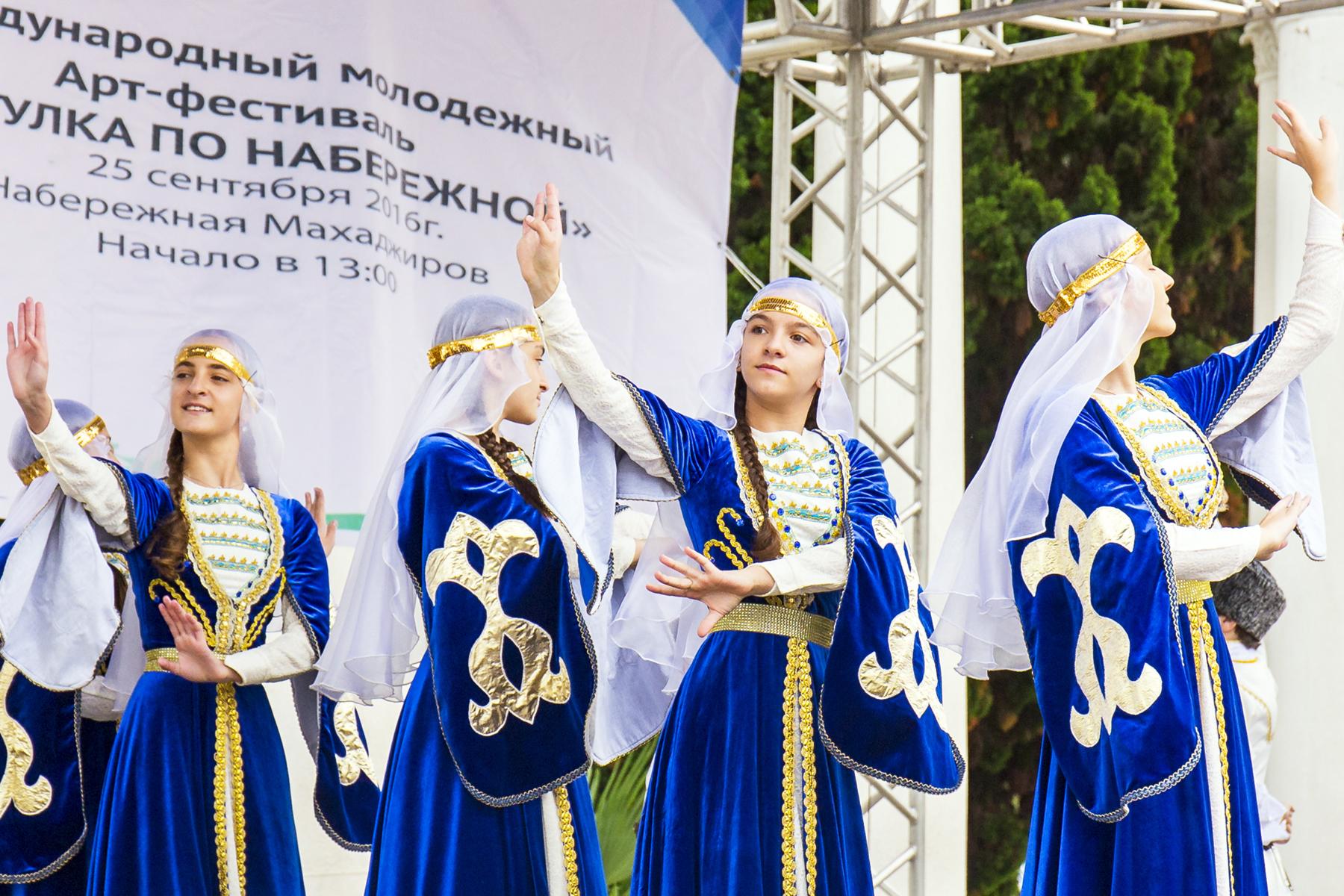 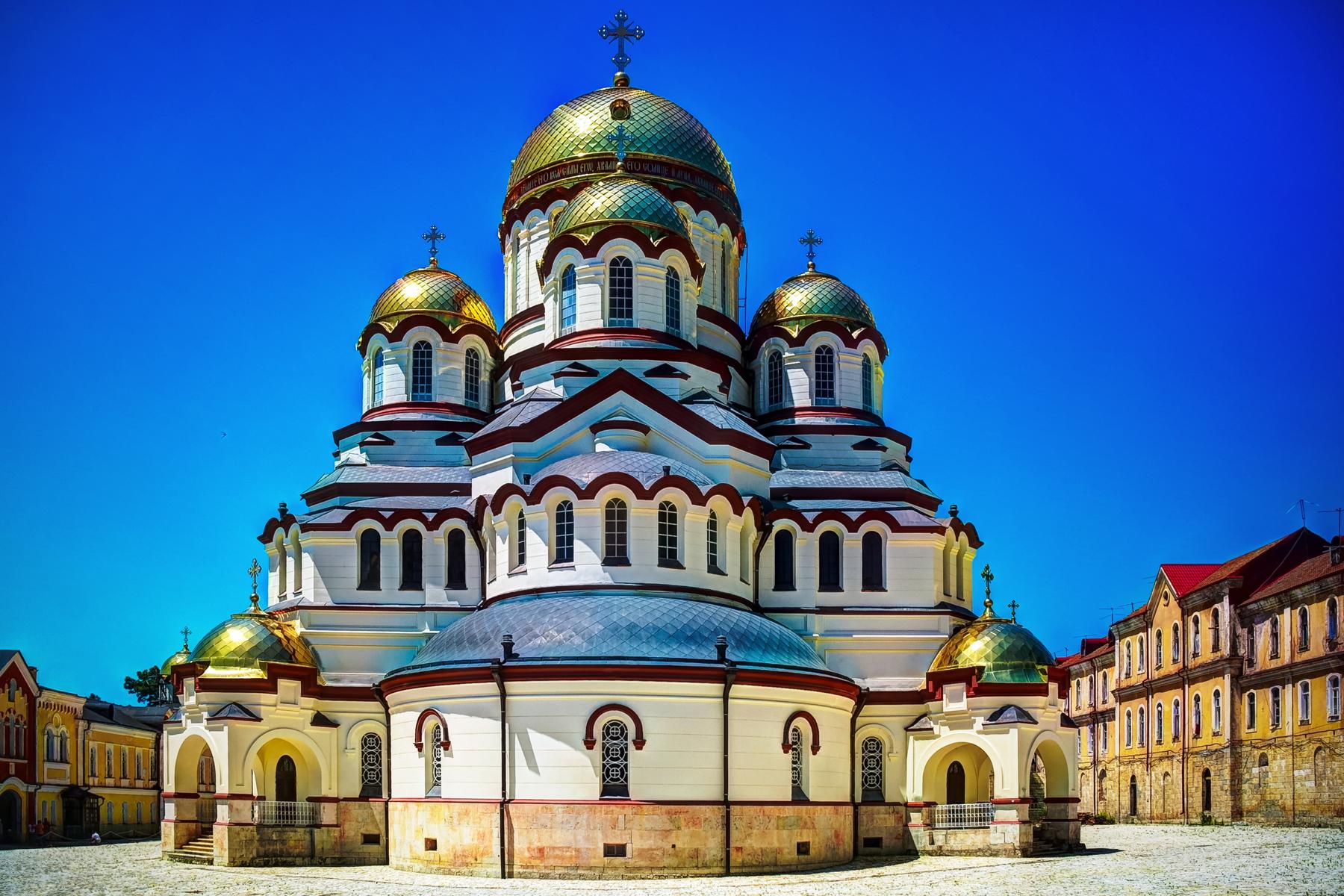 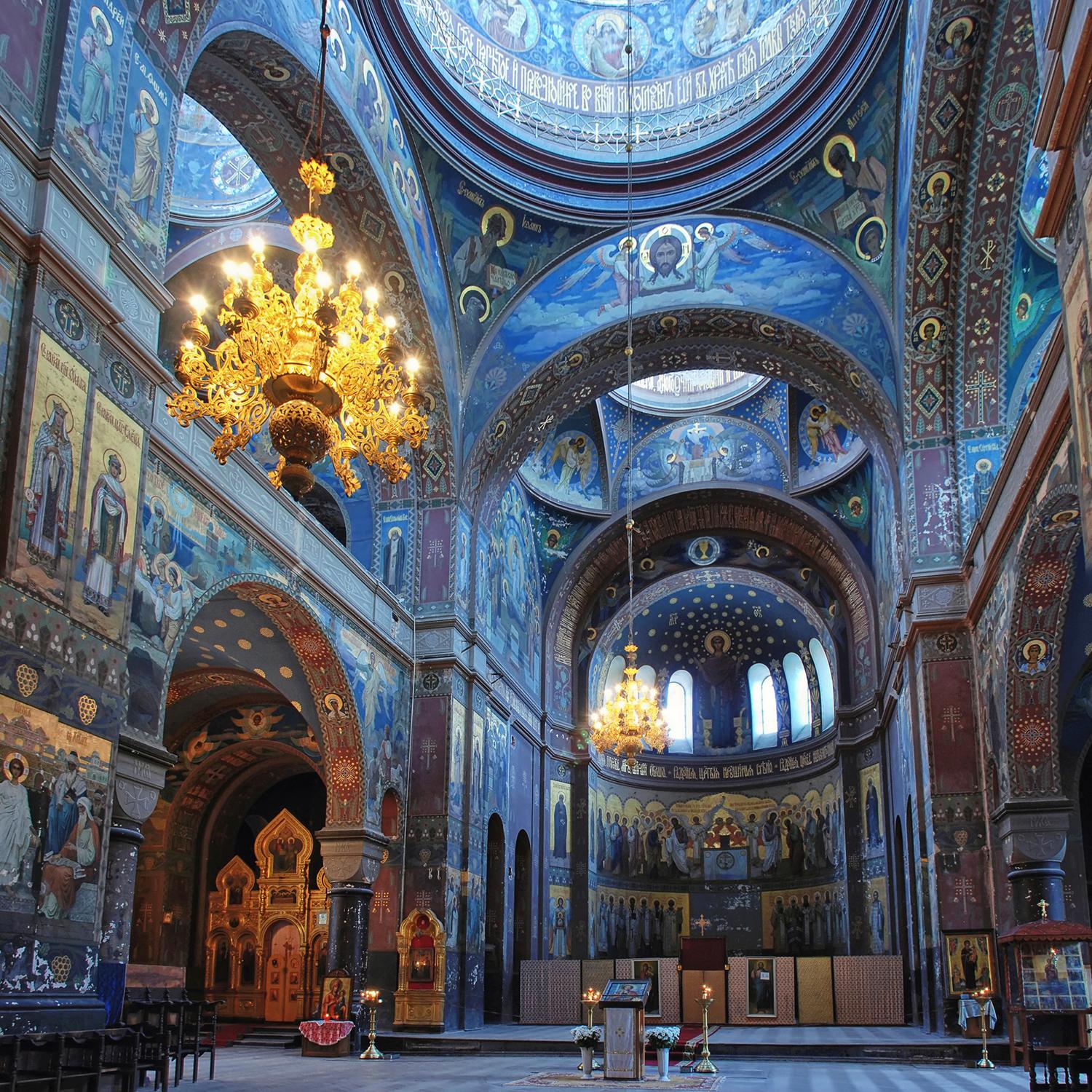 PHOTO: Madrugadaverde | Dreamstime.com
Previous Next
5 OF 12

Abkhazians Are an Ancient People

Some ethnologists trace the roots of the Abkhaz to the Heniochi, a fierce tribe documented by Ancient Greek explorers, while others believe their progenitors were Kartvelian (Georgian). Regardless of their origin, everyone agrees that Abkhazians are a culturally distinct Caucasian ethnic group; they have their own language, customs, and pantheon of nature gods (though the majority of Abkhazians today practice Abkhazian Orthodox Christianity and, to a lesser extent, Islam). 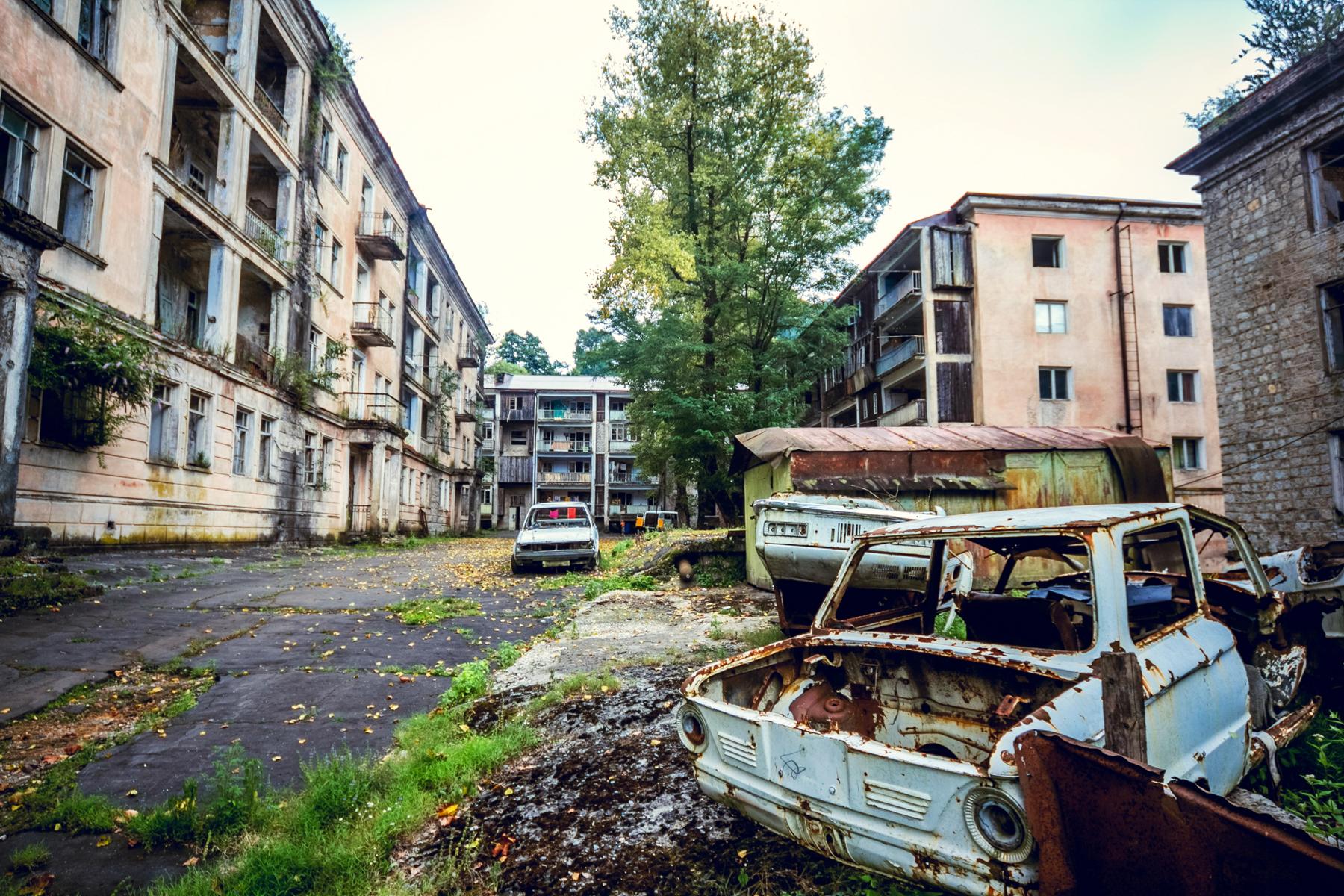 An Ethnic Conflict Ravaged the Region

Following the dissolution of the Soviet Union and Georgian’s declaration of independence in 1991, tensions boiled over in Abkhazia between separatist Abkhaz fighters (reinforced by militias from neighboring Caucasus regions and, debatably, the Russian military) and pro-unification Georgian populations, backed by the National Guard of Georgia. By the time the war drew to a close in 1993, there were staggering civilian casualties on both sides and allegations of ethnic cleansing; it’s estimated that up to 250,000 Georgians were driven from their homes by the Abkhaz pro-independence forces and their allies. After the war, poverty, depopulation, and political isolation left Abkhazia in dire straits. In the last decade—thanks, largely, to Russian aid and tourism—the republic has made noticeable strides in rebuilding itself. 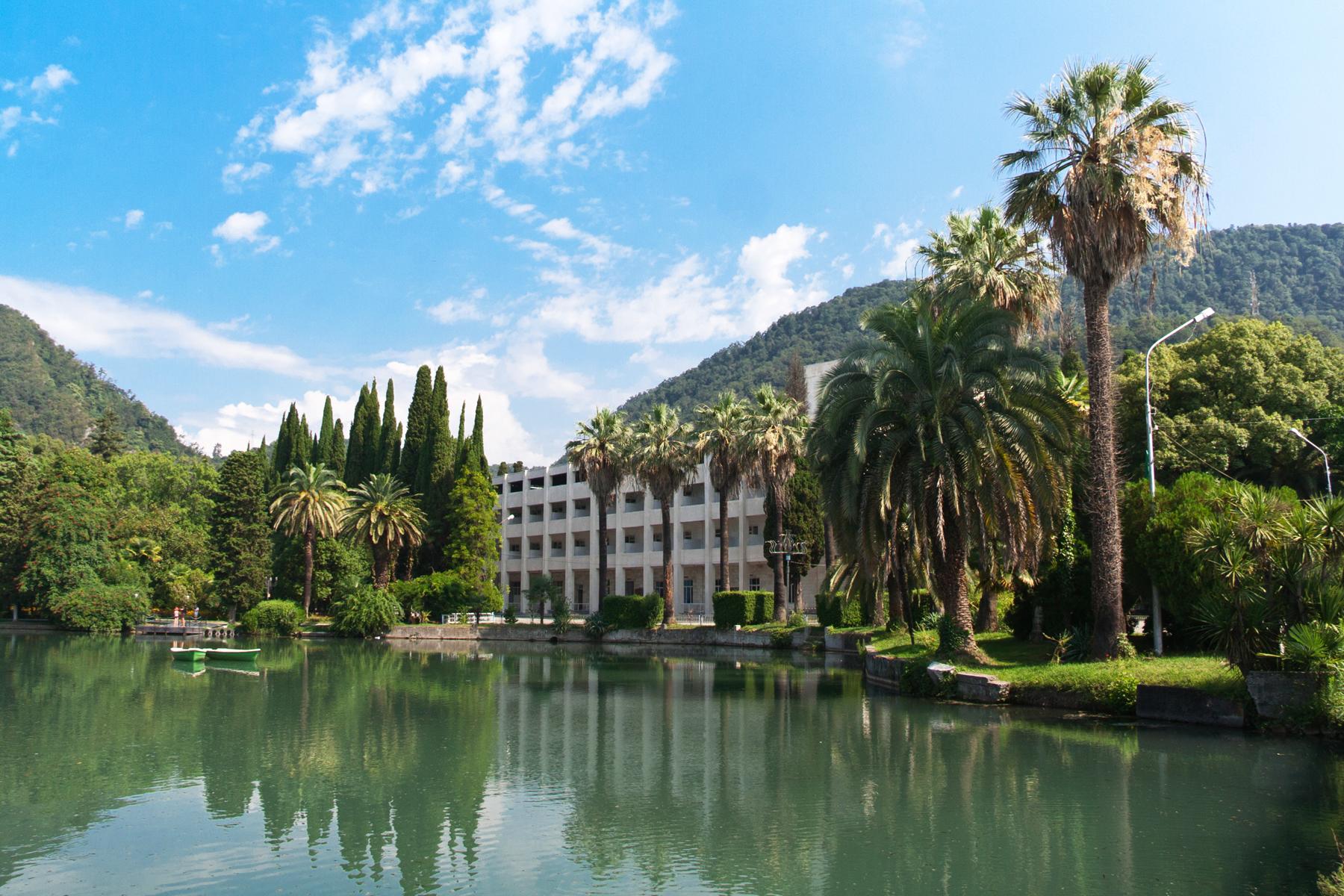 Abkhazia Is Under Russian Occupation

Though Abkhazia declared independence from Georgia in 1999, there’s no end in sight for its political and economic reliance on Russia, the only major country to recognize the breakaway republic as a sovereign nation. The ruble is Abkhazia’s de facto currency, and—to the chagrin of many native Abkhaz—Russian remains the lingua franca. Russian guards patrol the conflict divide, and as recently as 2016, new Abkhaz-Russian military alliances were being formed, furthering Russia’s sphere of influence in the region and angering Georgia and the international community. But as one learns quickly in Abkhazia, foreign occupation and a burgeoning tourism industry aren’t mutually exclusive: According to the Chamber of Commerce and Industry of the Republic of Abkhazia, 3.5 million tourists visited in 2017 alone, some 90% of which were Russian (though many also visit from Turkey, Belarus, and to a lesser extent, Europe). 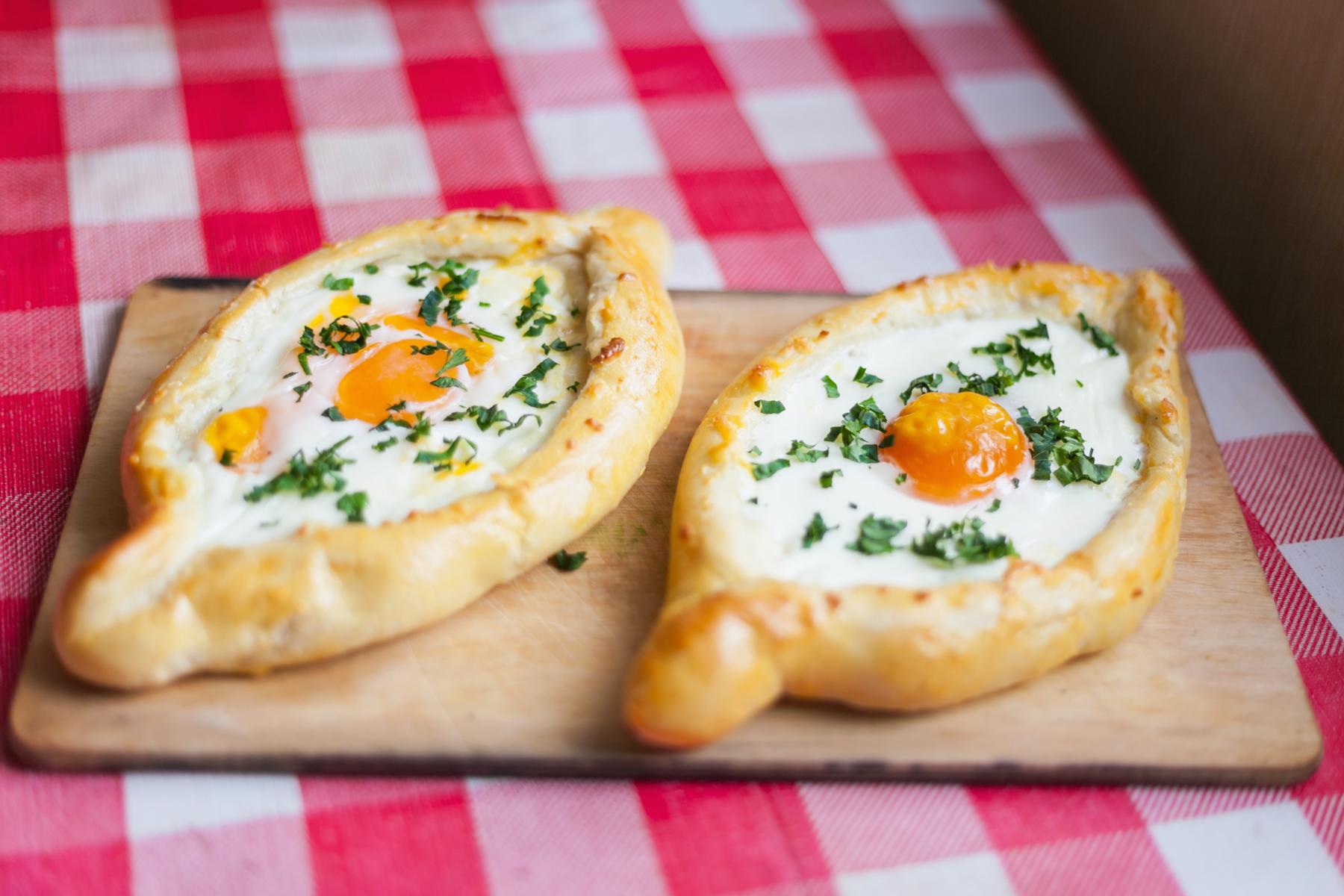 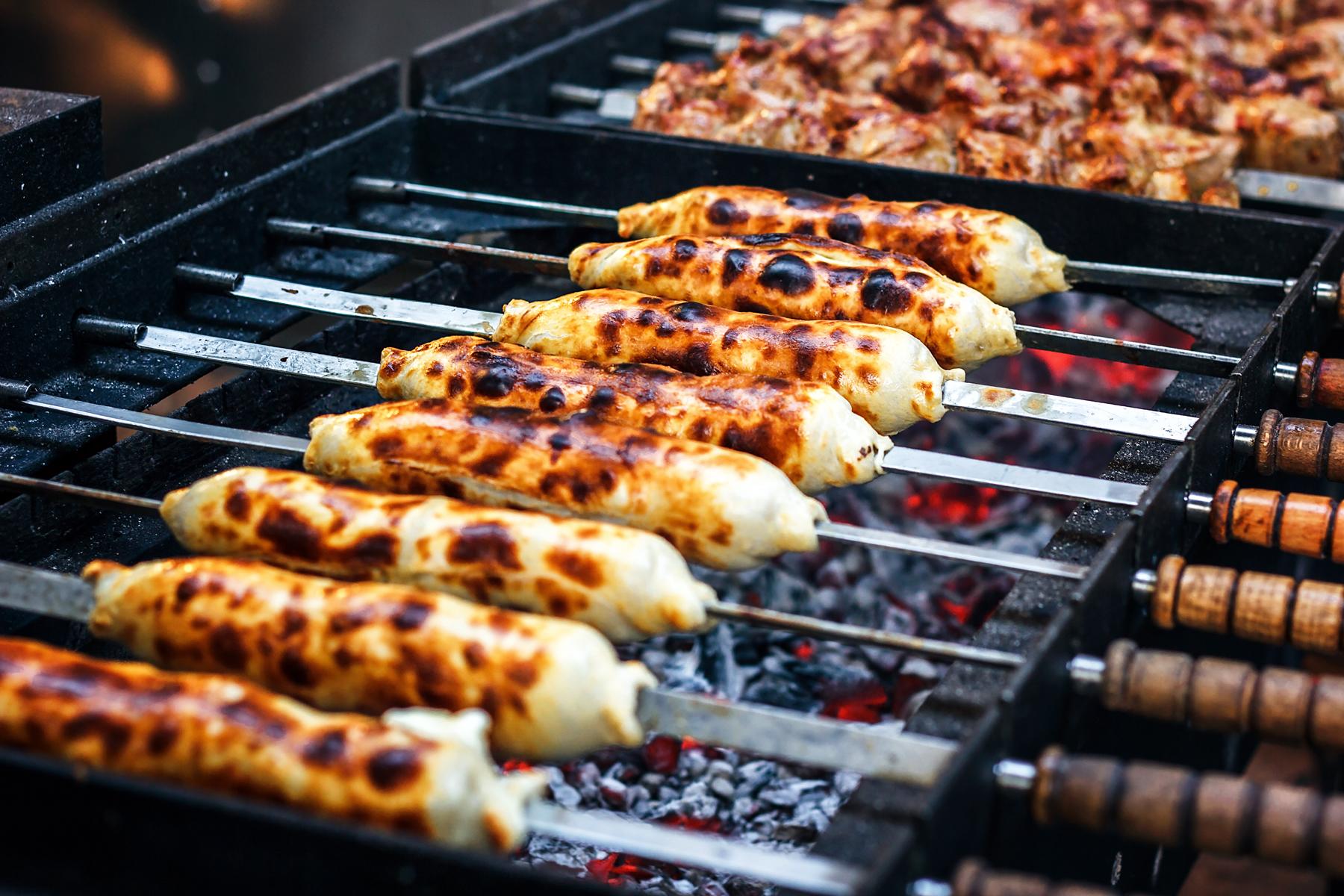 PHOTO: Bozhenamelnyk | Dreamstime.com
Previous Next
8 OF 12

Imagine a table brimming with hot cheese-filled pies, succulent Black Sea fish, glistening pickles, and thick corn porridge: Abkhazian food is a mouthwatering mix of unusually spiced delicacies from both land and sea. Sample these local bites and others at Restaurant Nartaa in Sukhum, whose outdoor tables are prime real estate for people watching along the boardwalk. Insider tip: Jars of ajika, the region’s famous brick-red chile paste redolent of garlic and fresh herbs, make terrific souvenirs; buy it fresh at the bustling Central Market. 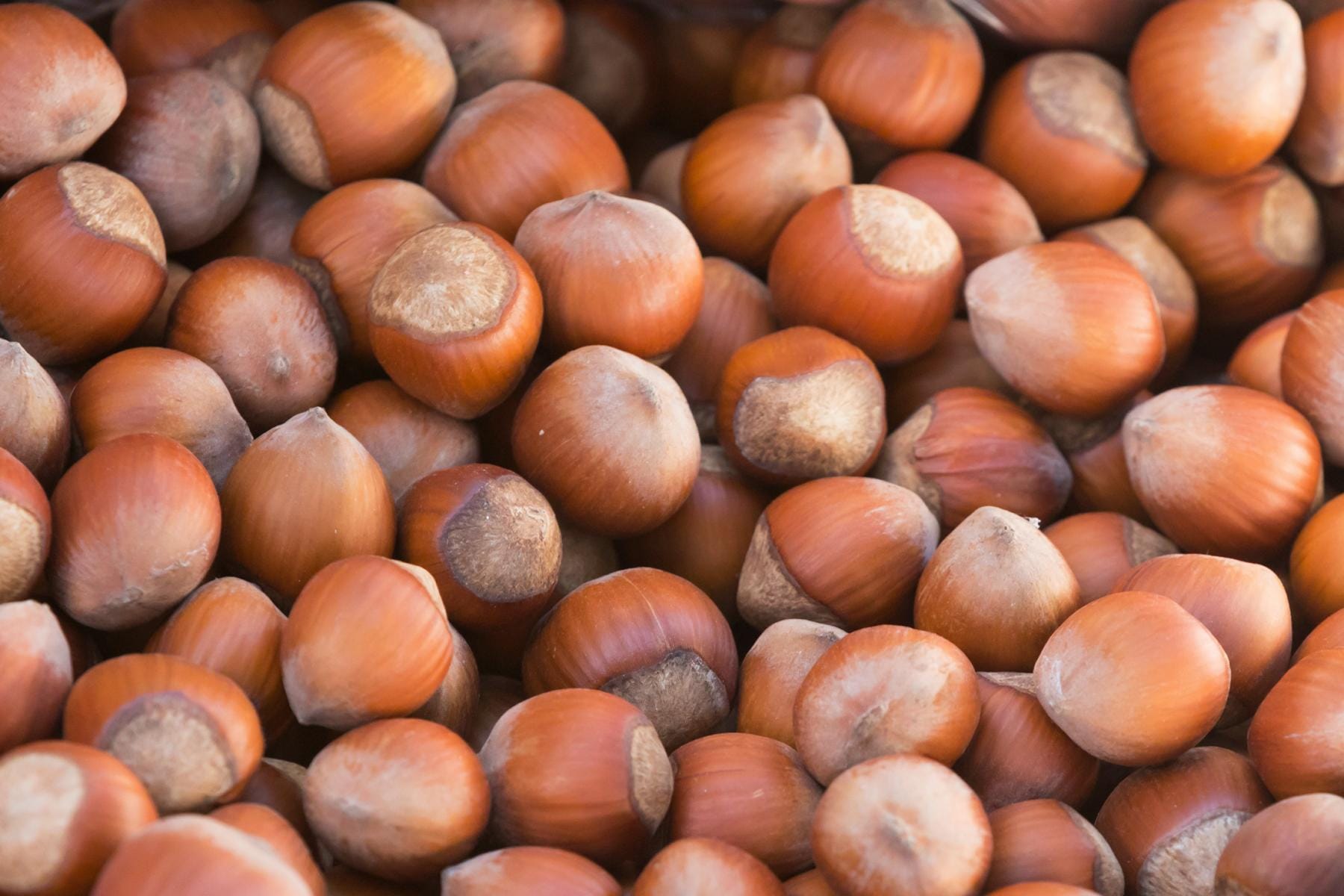 Georgia is the world’s fourth-largest hazelnut producer, so it comes as no surprise that Italian company Ferrero—of Ferrero-Rocher, Kinder, and Nutella—runs a nut-processing facility in Georgia. What is surprising, given the Georgian-Abkhazian trade embargo, is that at least one-tenth of Georgia’s hazelnut exports originate in Abkhazia, according to The Economist. So, if you’ve dipped into a Nutella jar while on vacation in Europe, you may have enjoyed some literal forbidden fruit. 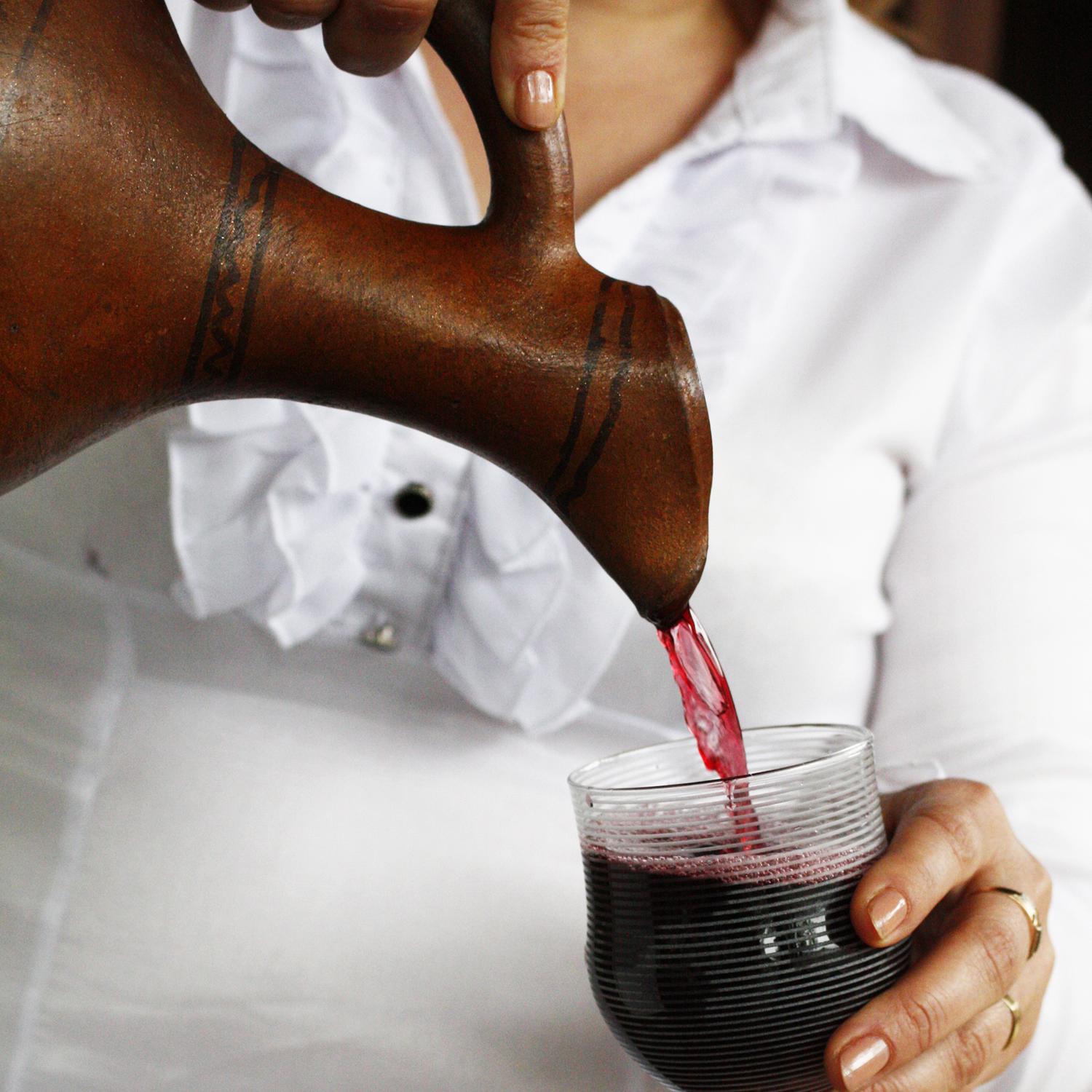 Wine Has Been Made Here for Thousands of Years

By the 2nd century BC, when the Greek historian Strabo wrote that Abkhazia was a vibrant winemaking center, locals had already been fermenting grapes for at least two millennia. Clay jars, which would’ve been buried underground and filled with fermenting juice, were discovered in an ancient tomb and dated to around 3000 BC. Though Soviet collectivization annihilated many indigenous grape varieties, you can still find intriguing local blends such as Wines and Beverages of Abkhazia’s “Lykhny.” 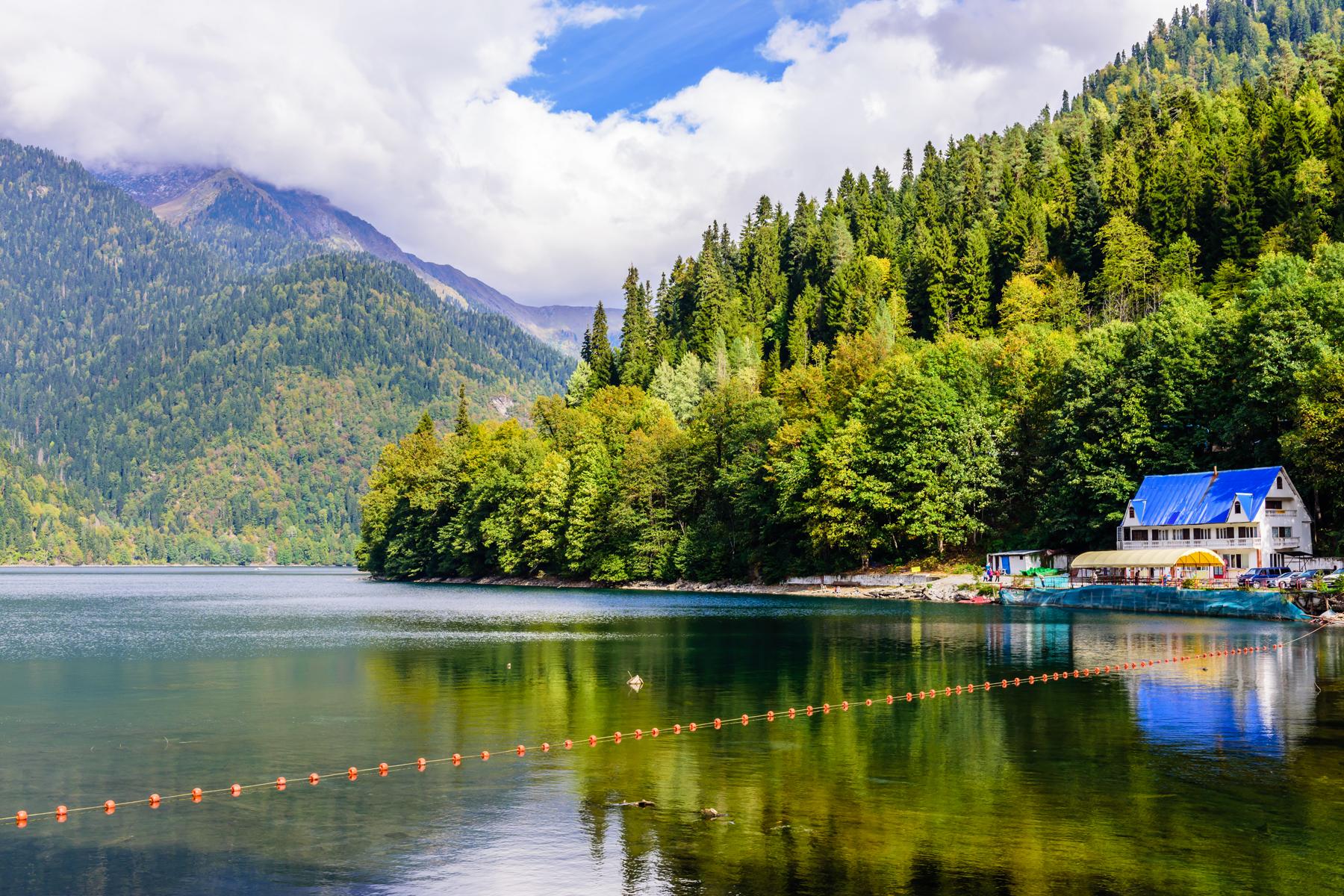 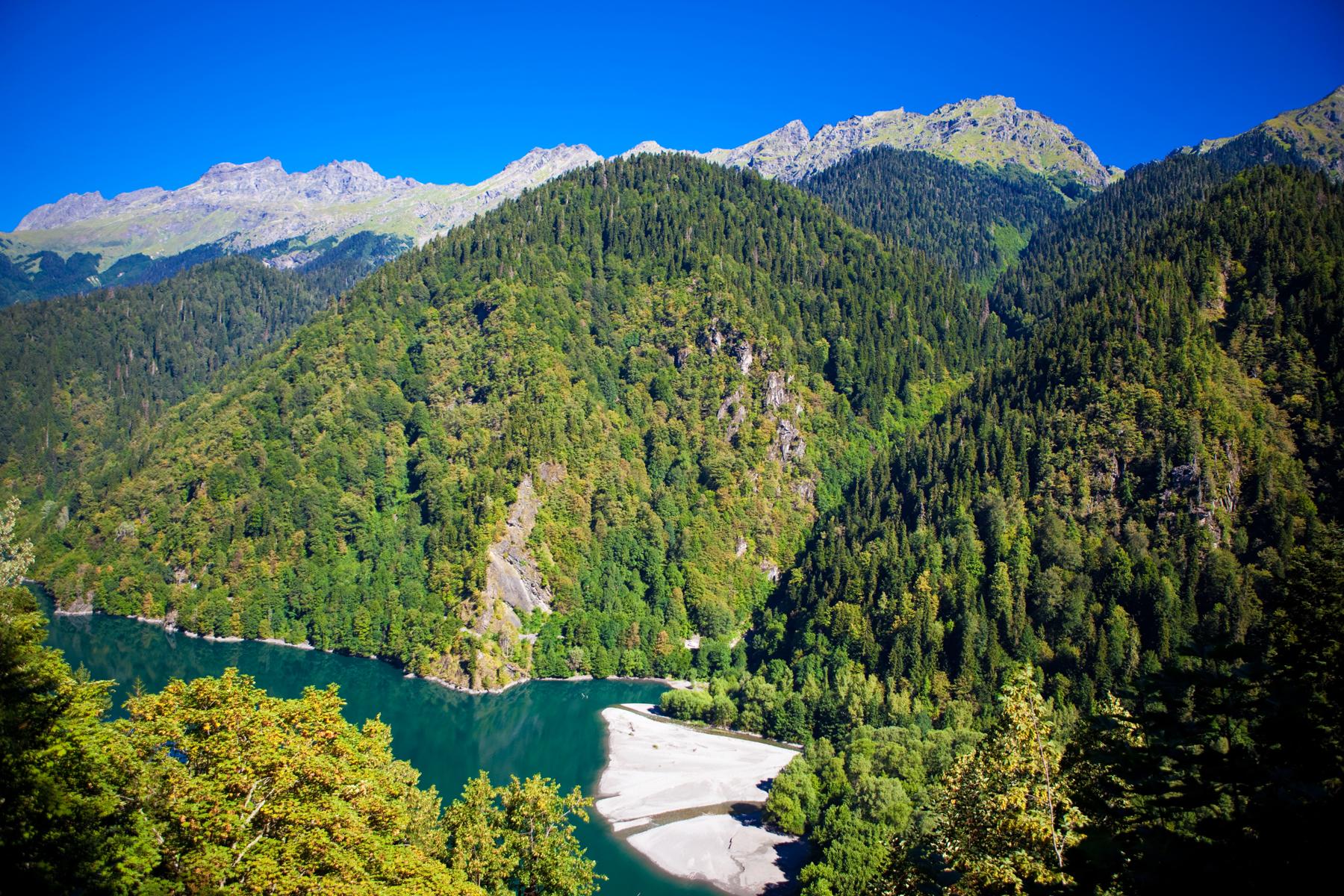 PHOTO: twiggyjamaica / Shutterstock
Previous Next
11 OF 12

Stalin Spent Some of His Final Summers Here

From 1947 until his death, the Soviet tyrant enjoyed leisurely summers at his dacha on Lake Ritsa, whose ice-blue water is framed by a theater of snow-capped mountains. Today, the summer house stands as an uncanny time capsule: You can see the bed where Stalin once slept, snap photos of his (pink!) toilet, and even take a spin on his original motorboat. But in spite of the site’s magnificent backdrop, it’s hard not to be overwhelmed by dread. After all, Stalin incorporated Abkhazia into Soviet Georgia against its wishes, all but snuffed out Abkhaz culture and language, and forcibly altered the demographic balance against the Abkhaz in favor of Georgians through massive settlement projects, sowing the seeds for future conflict. 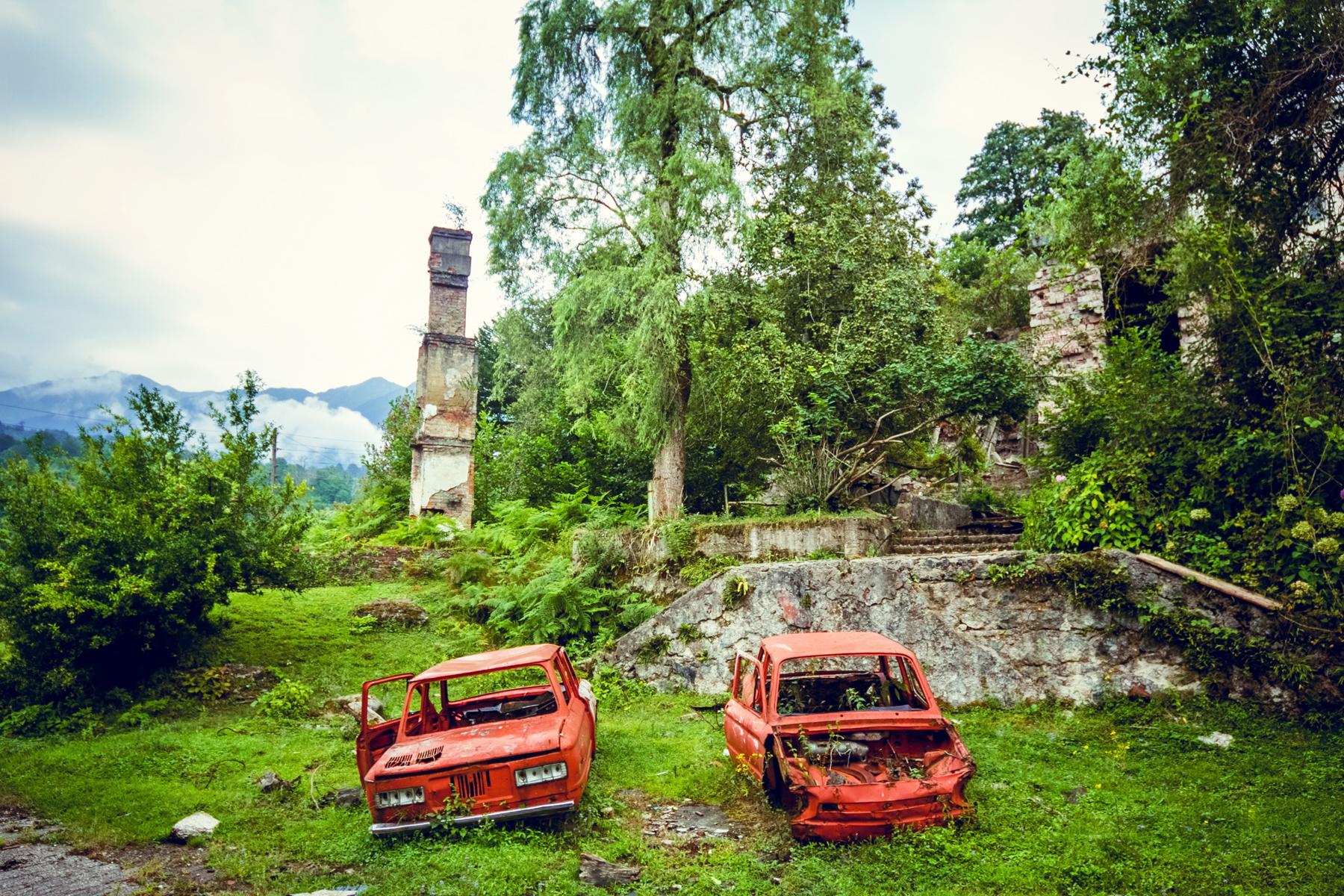 Human Rights Are a Concern

The Abkhaz Constitution promotes respect for the human rights of its citizens, but there are unanswered questions about the civil status of ethnic Georgians living in the Gali district, an impoverished area that remains largely in ruin (you can travel there freely, but there isn’t much to see beyond farmland and ramshackle houses). Two Georgia-Abkhazia crossing points were closed in 2017, limiting these residents’ freedom of movement. Further, according to a study published in 2017 by the Palme Center, a Swedish human rights organization, anyone living in Abkhazia who doesn’t hold an Abkhaz passport (i.e., the vast majority of Georgians living in the region) can’t register their marriages, obtain property rights, apply for birth certificates, or vote in elections. Georgian language instruction is mostly banned in Abkhaz schools, despite the fact that in many Georgian communities, teachers and students speak shaky Russian and barely a word of Abkhaz. It’s widely believed that these intolerable politics are meant to drive Georgians away or force them to change their ethnicity. UNICEF, UNDP, the Red Cross, and several other NGOs are on the ground aiding all ethnicities in Abkhazia.