Oscar Niemeyer was a giant in the world of modernist architecture, but he did not just create sculptural edifices made of reinforced concrete and glass—he created alternate universes.

Born in the hillside district of Rio de Janeiro in the early 20th century, and for many years under the tutelage of modernist architect Le Corbusier, Oscar Niemeyer was to architecture what the first artificial satellite Sputnik was to space: a pioneer, a breaker of frontiers, and full of a utopian daring for form and ethos the likes of which the world had not yet seen.

Maybe it was the undulating shape of his line, so reminiscent of nature’s silhouette, that drove his acolytes mad with worship. Or the biomorphic tilt of his structures that made them feel their earthly insignificance. Whatever the case, walking through the sinuous sprawl of the space between those ethereal slabs of cement feels like being plucked from the comfort of your couch and catapulted into science fiction. Like Space-Age Pop music manifest. Like everything the future wanted to be, but couldn’t quite manage to become. Stretching from Brasilia to Paris, this is the weird and wonderful world of Niemeyer. 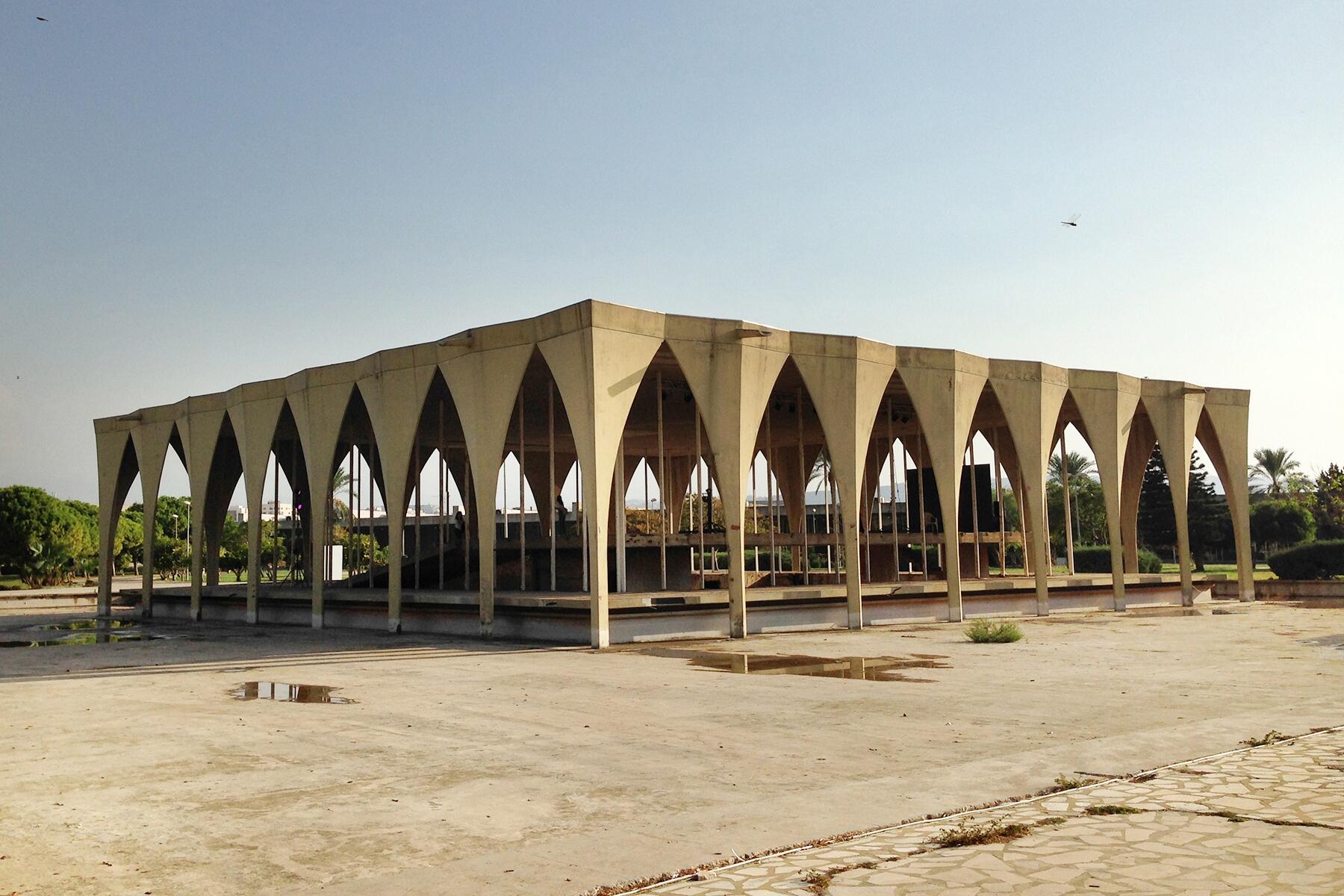 Built in the early ’60s in a bid to make Lebanon a regional business hub, this permanent international fair was meant to accommodate more than 2 million visitors a year. It now stands a ghostly complex of geometric shapes and rusted steel rebar, as exquisite in its unfinished state as in the state the mind envisions it could have been. If you wind through its vestiges of orange orchards and palm trees, you will find the oval arena that contains them, littered with eager students sketching what remains and old men doing calisthenics. There is a stillness here of ancient ruins; a kind of grandeur that inspires silence. 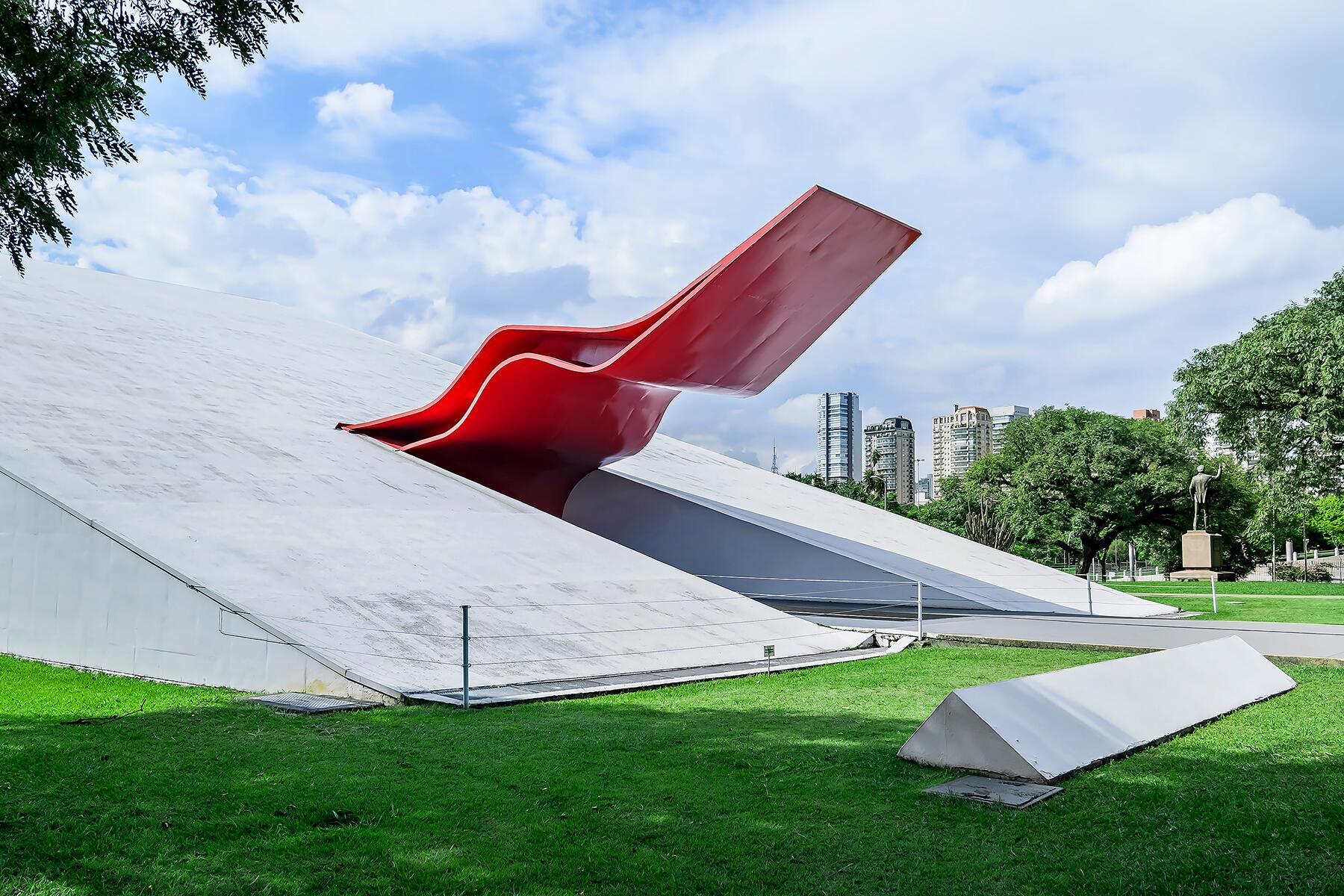 The 158-hectare park was designed by agronomist Otávio Augusto Teixeira Mendes, but some of the most distinctive elements it houses were drafted and realized by none other than Niemeyer. The auditorium, for instance, which is a venue for music shows, greets its spectators with a fire hydrant red marquee that sticks out into space like a curling metal tongue. It is officially called Labareda, which is Portuguese for “flame,” but its shape is ambiguous enough to send even the most unimaginative into psychedelic rumination. Once inside the trapezoidal mass of reinforced concrete painted white, an impressive and imposing red sculpture made of plaster by Japanese-Brazilian visual artist Tomie Ohtake hangs overhead, its form calling to mind some kind of deconstructed record with its vinyl grooves splayed and torn. 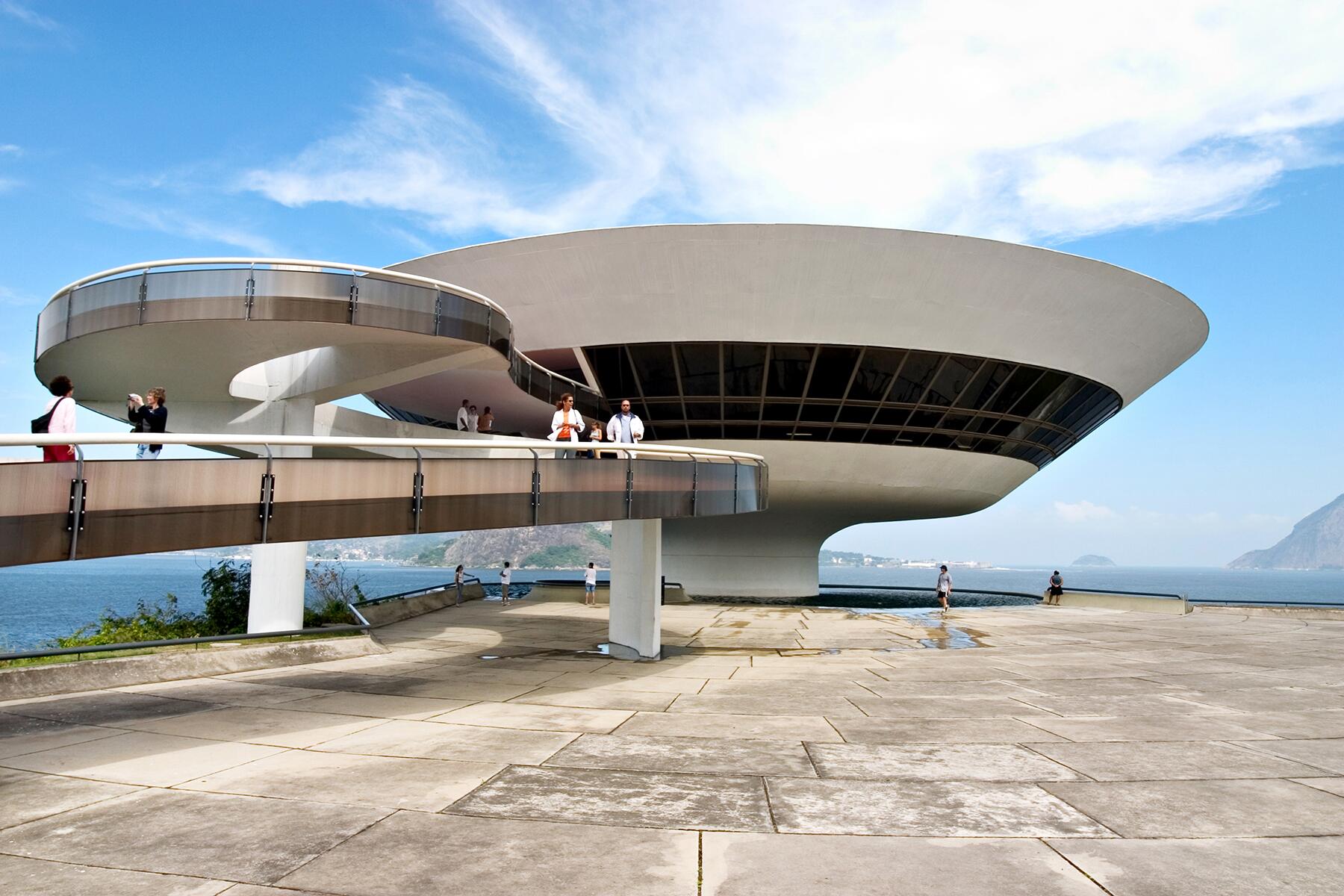 This was purportedly one of Niemeyer’s favorite projects. If retro-futurism had a totem, it would be the flying saucer, and this landmark completed in 1996 was constructed in ode to that. One of the more iconic and on-brand of Niemeyer’s works, the UFO-reminiscent centerpiece that sprouts from a water basin as though a flower in bloom affords sweeping vistas of Sugarloaf Mountain and Guanabara Bay. Windows slanted at 40-degree angles and a coiled, carpeted ramp also saturate the site with a decidedly space-like atmosphere. 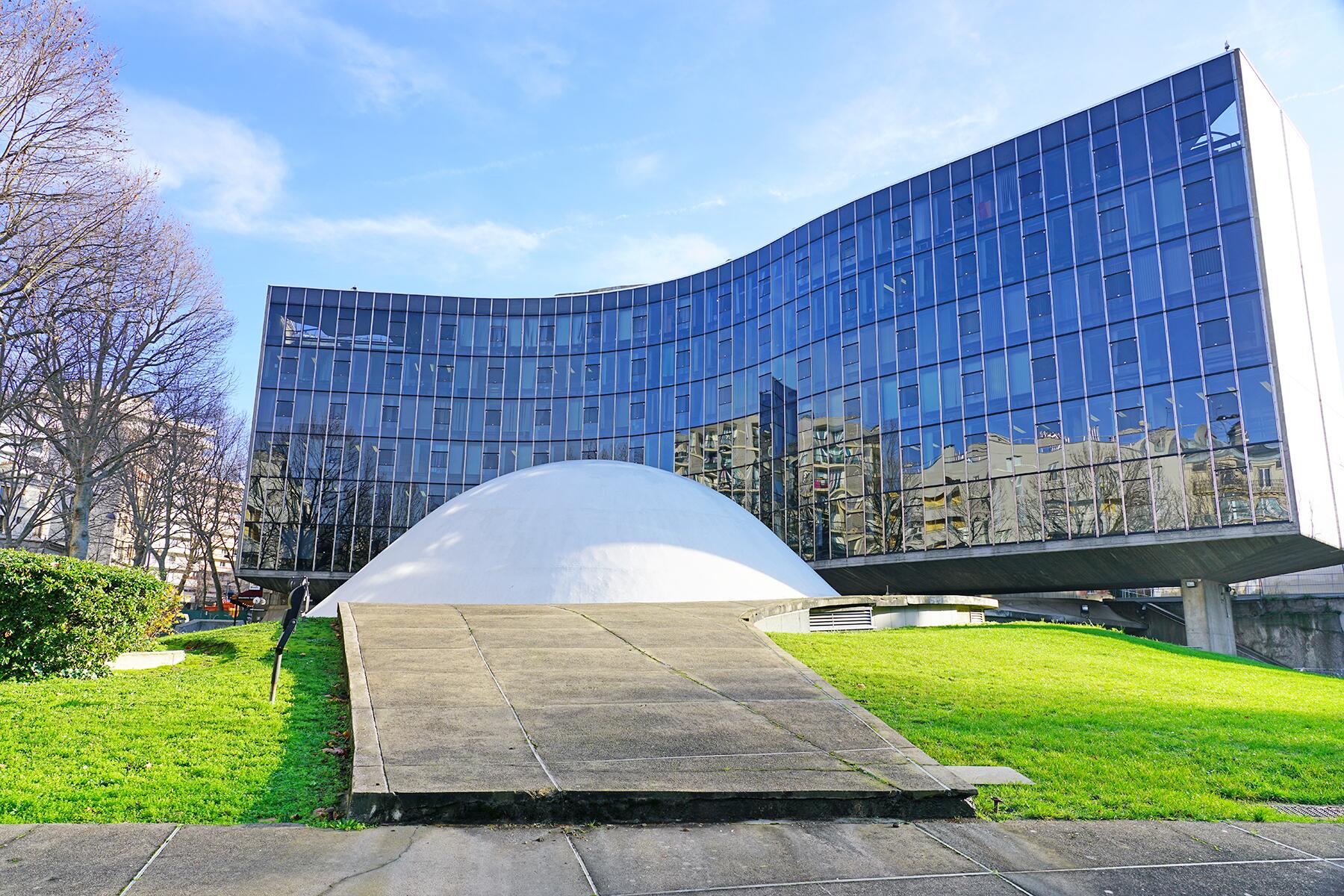 This kelly green and chrome edifice for France’s Communist Party is as poignant in its display as it is in its development. Though its concrete grandeur can be appreciated for its own sake, its origin story, in which Niemeyer fled to France after Brazil was taken over by a right-wing dictatorship, is just as compelling. A communist who sought self-imposed exile in France, Niemeyer was commissioned by their Communist Party to create a space that was able to breathe with the city that housed it and acted as an architectural counterpart to their leftist ideals. Slip into the open-air underbelly of the building for shade, or enter the slanted openings of its conference-hall-cum-command-center, take a seat, and marvel at the ethereal light that diffuses itself through thousands of steel squares. 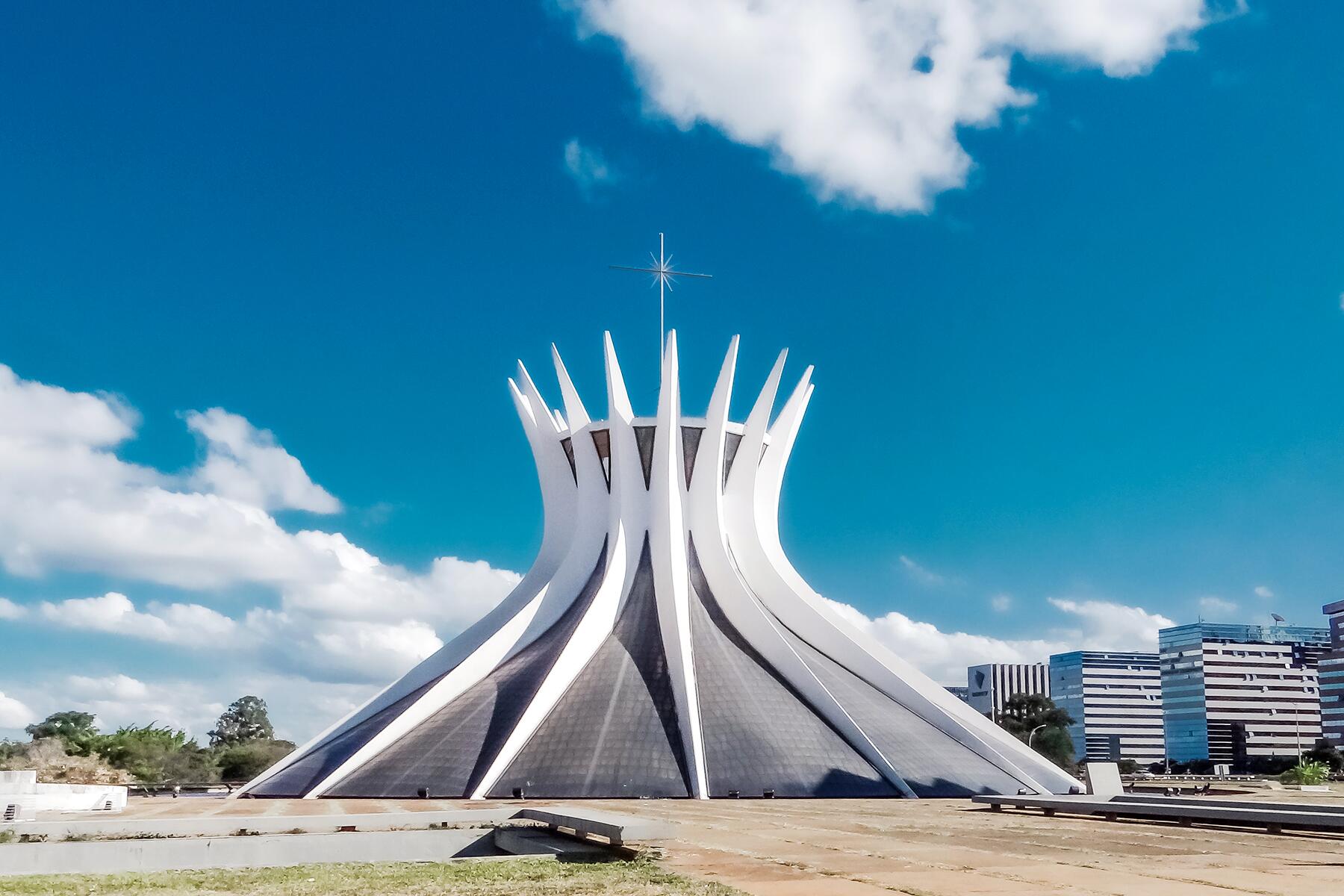 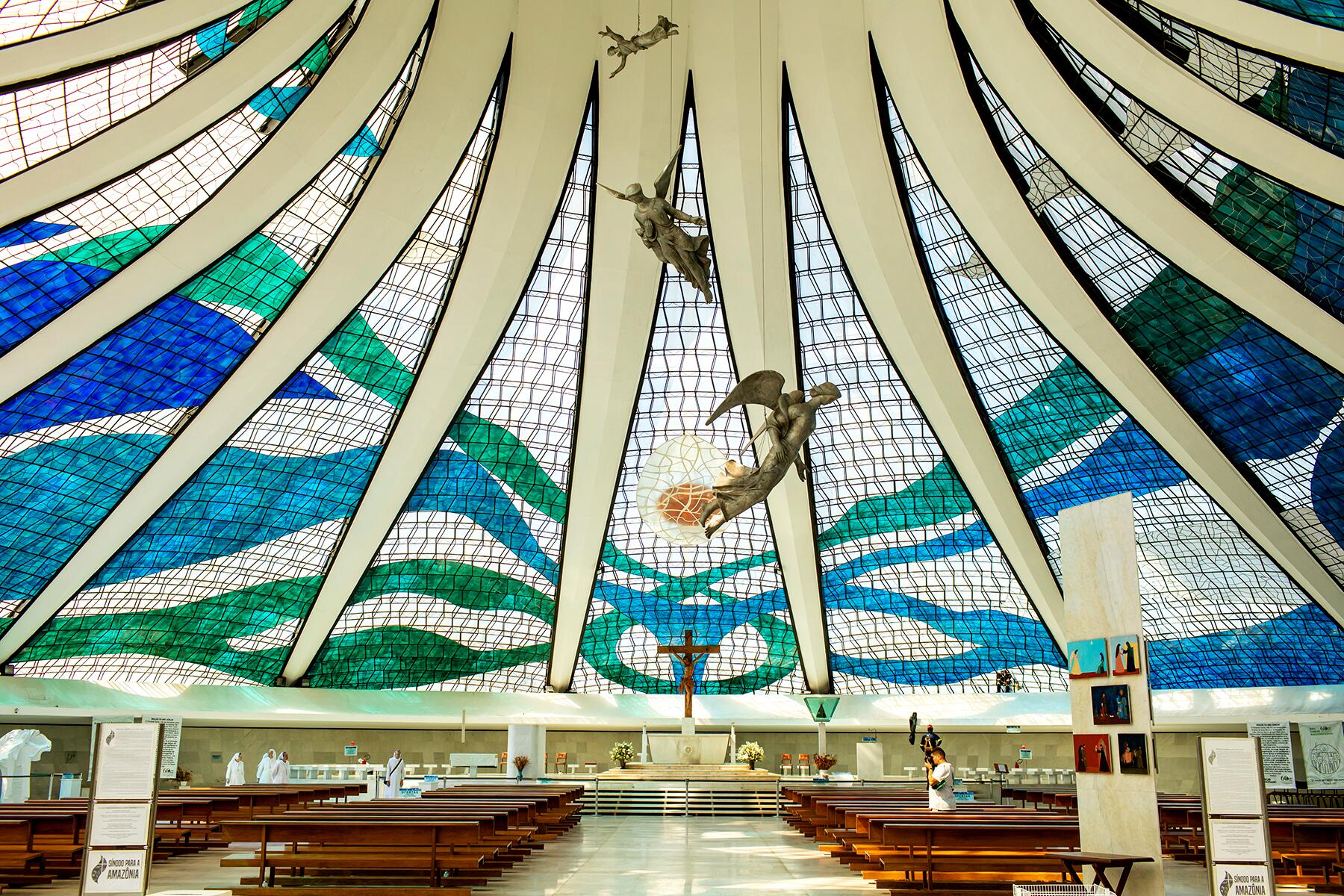 PHOTO: Luis War/Shutterstock
Previous Next
5 OF 12

This voluminous space serves as the seat of the Archdiocese of Brasilia, but once at the hem of its circumference, it is clear that it is so much more than that. Parabolic concrete columns cinch themselves at great heights like an invisibly belted skirt, and stained glass arabesques of blue and white and brown are pieced together between them to give the structure a supernatural, under-the-sea quality. Admire the angels hovering above by way of suspended cables as the Spanish-donated bells ring clamorously in your ears. 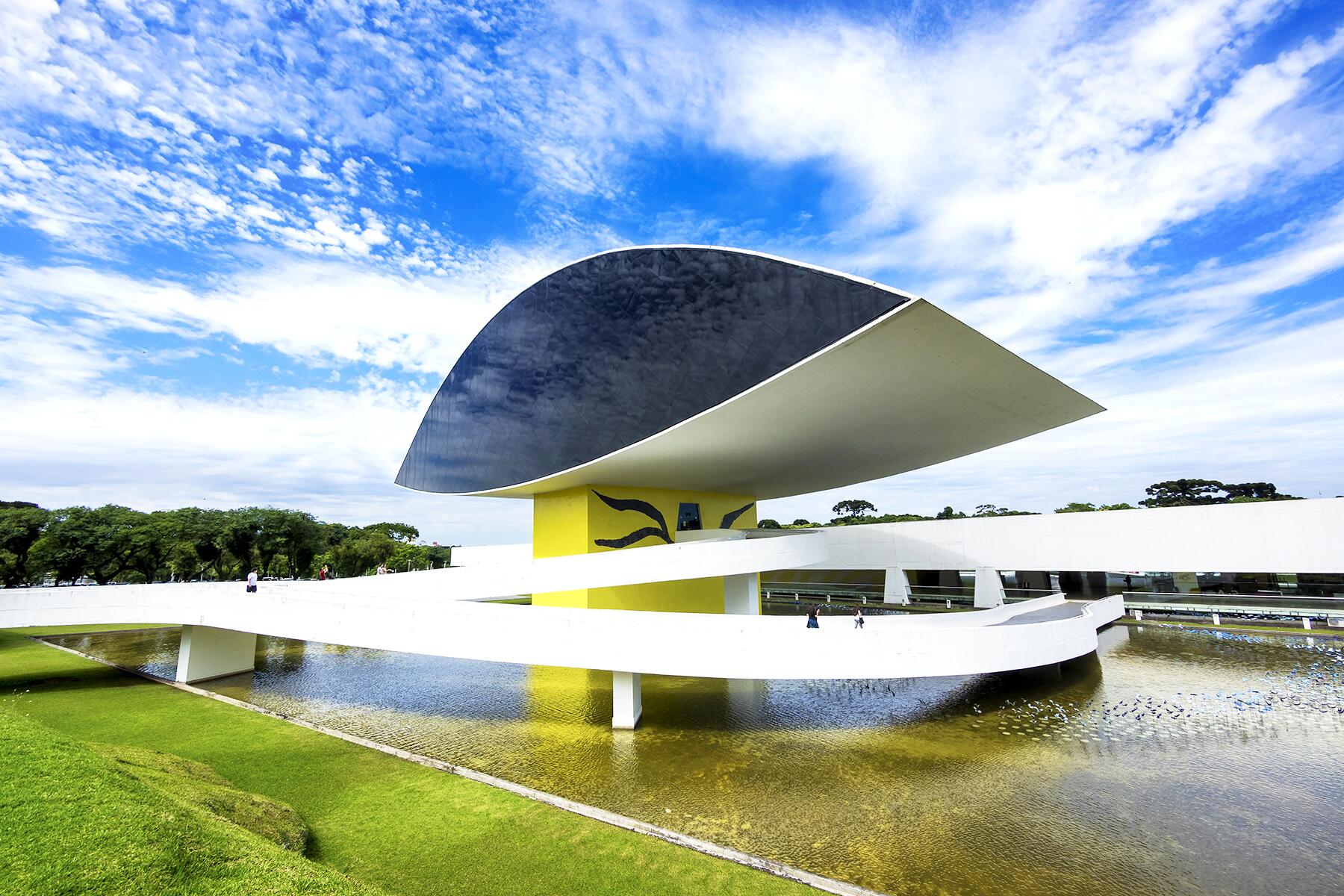 Completed in 2002 when Niemeyer was 95 years old, what is also known as Novo Museu or New Museum, is a sleek sight to behold with its canary yellow pillar and its eye-shaped 2,000-square foot gallery. It incorporates some of his most signature elements such as bold, geometric forms and curvilinear pedestrian ramps, but even this structure is unique in his oeuvre. Slant the gaze and the mind from afar and it almost looks as though it were a periscope attached to an invisible submarine. Though it is made of glass, steel, and concrete and emanates industrial strength, the surrounding garden by Roberto Burle Marx lends it a biomorphic quality that places it firmly in nature’s depths. 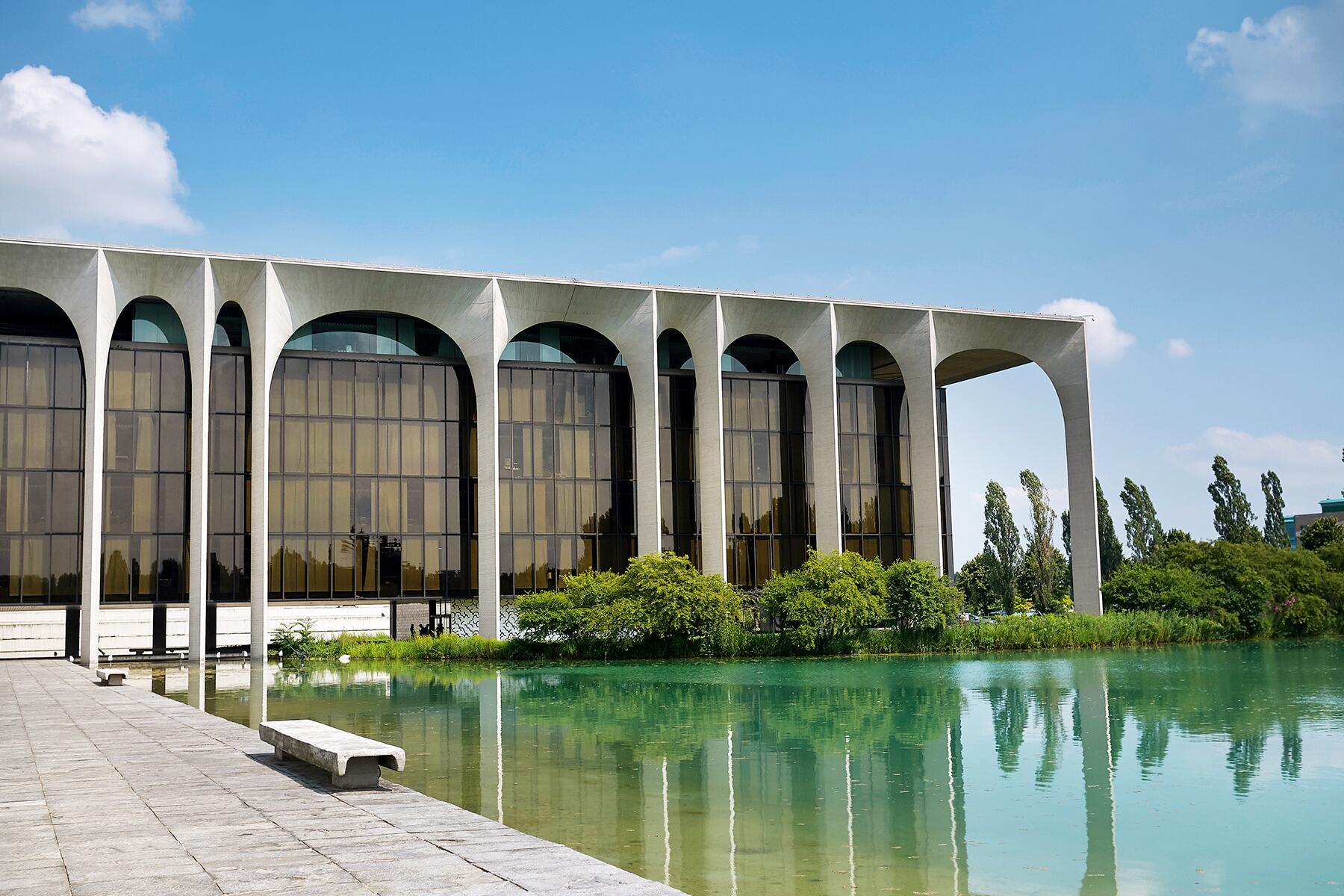 Inspired by Niemeyer’s famed Itamaraty Palace, chairman of the Italian publishing house Mondadori wanted one of his own and so commissioned the architect to design the company’s new headquarters in 1975. Though it was primarily realized due to an increased number of employees, it is nonetheless exemplary of Niemeyer’s “form follows beauty” approach. He referred to it as his best in Europe and it is easy to see why with its large reflective pool, the enormity of its glass inner sanctum, and its irregularly shaped and spaced concrete arches that give the appearance of a living wave spectrum, or what Niemeyer refers to as “musical rhythm.” 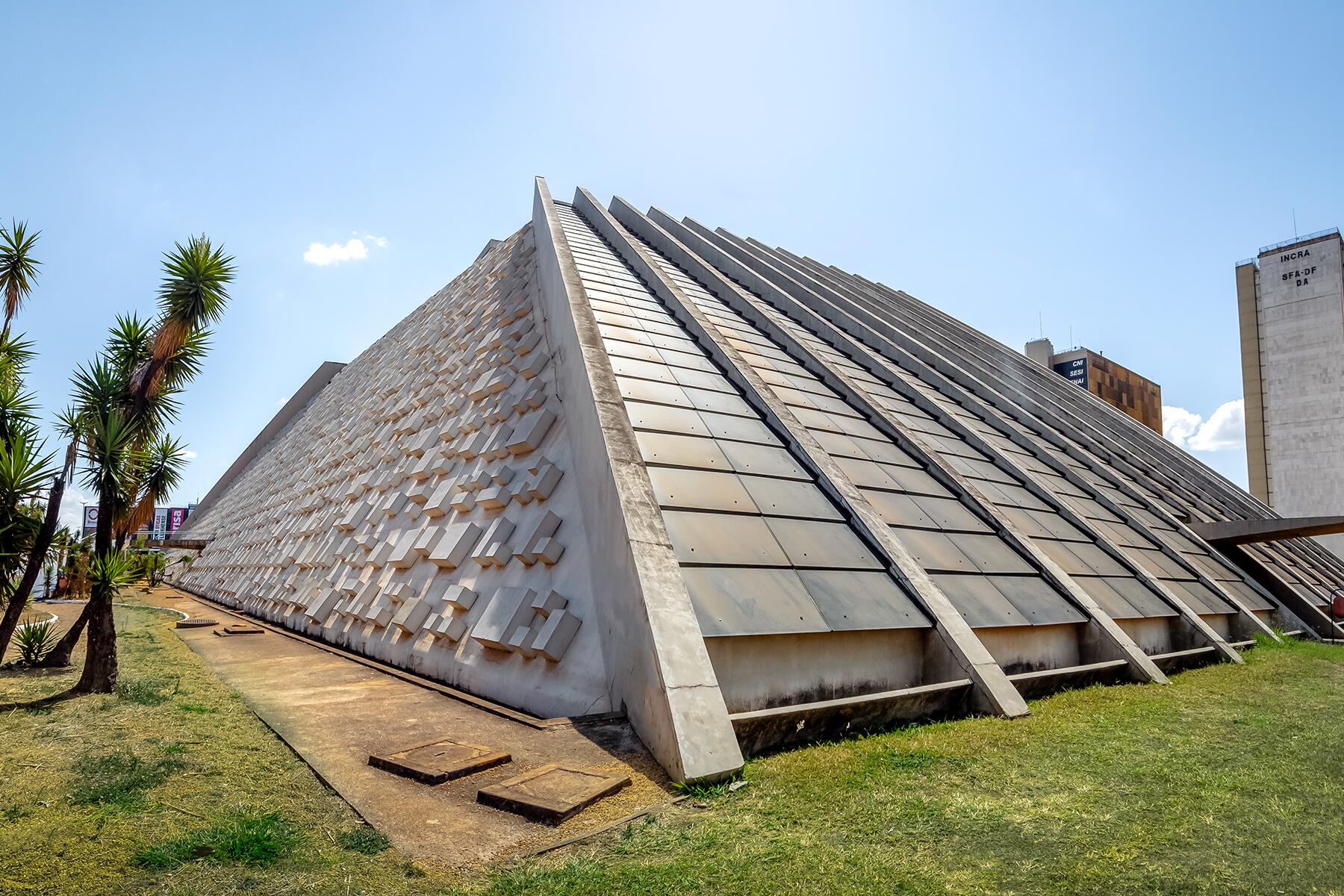 Like so much of Niemeyer’s architecture, this edifice assumes a bold, irregular form, but starkly departs from the usual sinuousness of his line. In fact, he seems to have tapped into the tome of ancient works for this truncated pyramid. The facade, too, is reminiscent of yore with its hieroglyphic cubes by visual artist Athos Bulcão that jut forth like high relief sculptures, but all other architectural elements are distinctly modernist. Comprised of three theaters and swarming with green, this concrete and skylit temple to the visual and musical arts is a cornerstone of his nation’s capital of Brasilia. 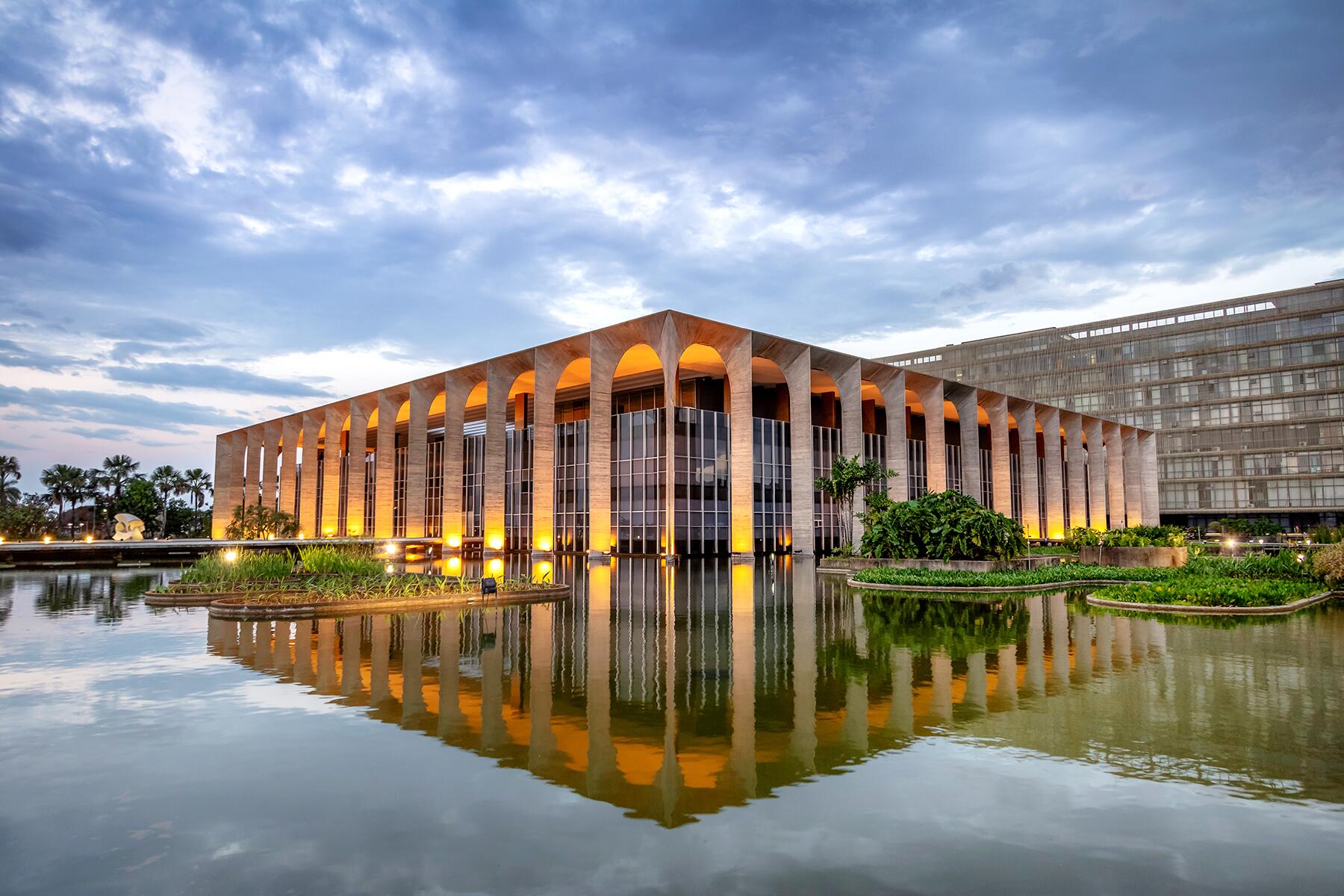 Also known as The Palace of Arches, this building serves as the headquarters of the Ministry of Foreign Affairs in Brazil. Its aesthetic, though, is certainly not what one would normally expect from a governmental agency, what with its semi-circular arches, geometric metal structures, and poured concrete helix staircase within. The name also harkens to another world as it originates from the Nheengatu language meaning “river of small stones.” 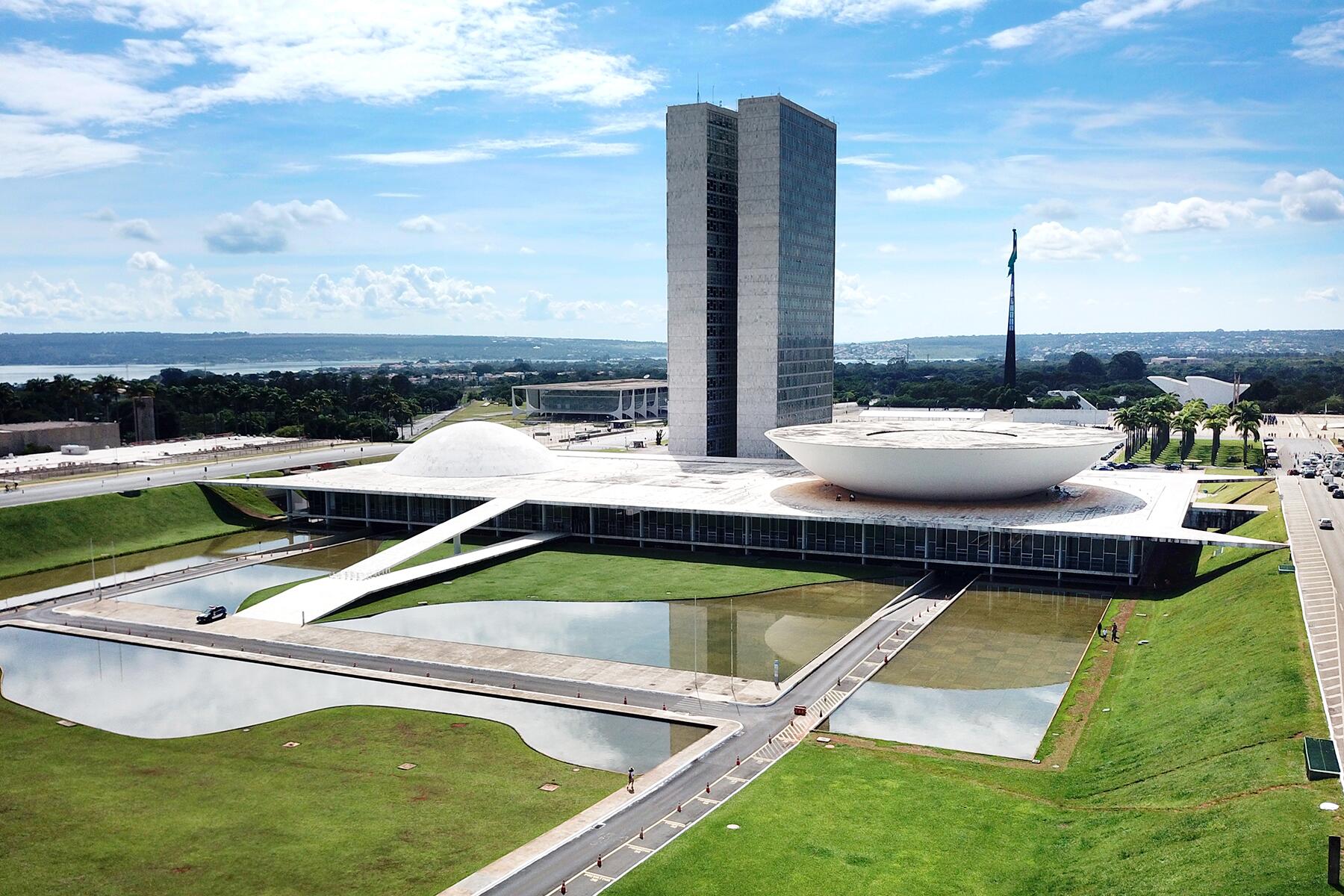 Niemeyer’s partiality to Le Corbusier is reflected most prominently in this tripartite complex which looks more like a fanciful factory than it does a legislative stomping ground. And much like Le Corbusier, who was commissioned by Jawaharlal Nehru to architecturally show India’s progressive spirit, Niemeyer was sought by former Brazilian president Juscelino Kubitschek to capture Brazil’s. Guided by modernist and utopian ideals, they broke free from the fetters of their colonial pasts and inaugurated a democratic future made in their image, even if only by aesthetic means. Twin pillars scrape the sky, a domed Senate rests robustly on paved earth, and a bowl-shaped House of Deputies leaves itself bare and empty to whatever cosmos-bound creatures seek its shelter. Originally called the Palace of Justice, the ministry was renamed in 2003 to honor the late historian, lawyer, and jurist, Raymundo Faoro. The building itself, though, was constructed in 1972 and showcases some of Niemeyer’s more characteristic architectural elements such as the brise-soleils and the idiosyncratically spaced arcade. Another pleasing anatomical feature is the facade covered in curved concrete slabs that protrude through waxing and waning arches. They serve as spouts and, at the right time, you can see water cascading from them into the pool below. 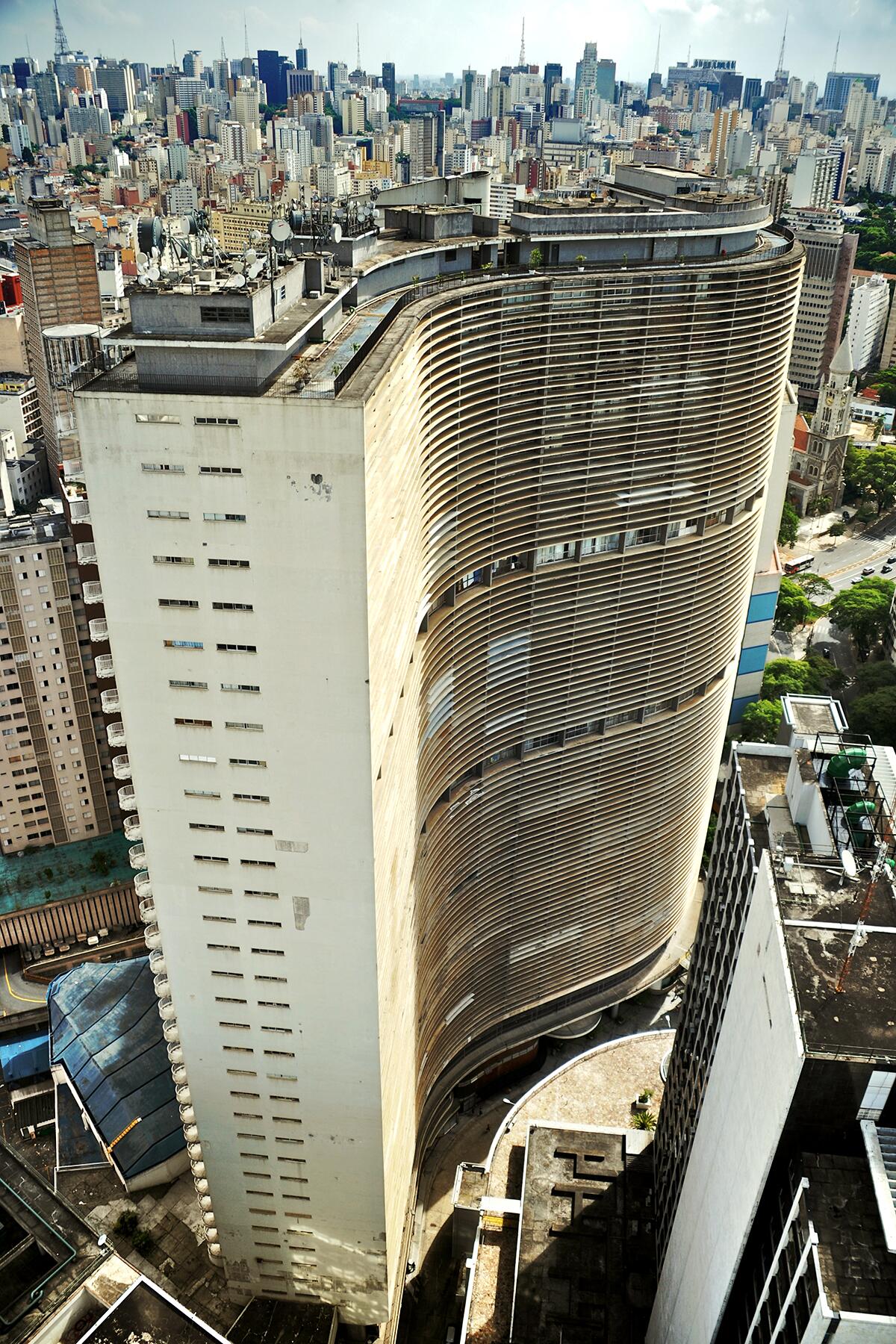 Edificio Copan is, in some ways, Niemeyer’s magnum opus, but that has less to do with style and far more to do with sheer scale and execution. To call it an edifice would also be misleading. Bristling with 5,000 occupants and assigned its own postal code, it would be far more accurate to call Edificio Copan a town. One with its own evangelical church, travel agency, and restaurants. One that soars “s-shaped” toward the sky, a 38-story behemoth of democratic idealism and modernist might.