The definition for what makes something “folk art” is very broad. But typically, it tends to be art that’s made by creators who are informally or self-taught. There is a myriad of museums and indoor collections dedicated to folk art and creators. These examples of American folk art can all be experienced en plein air. 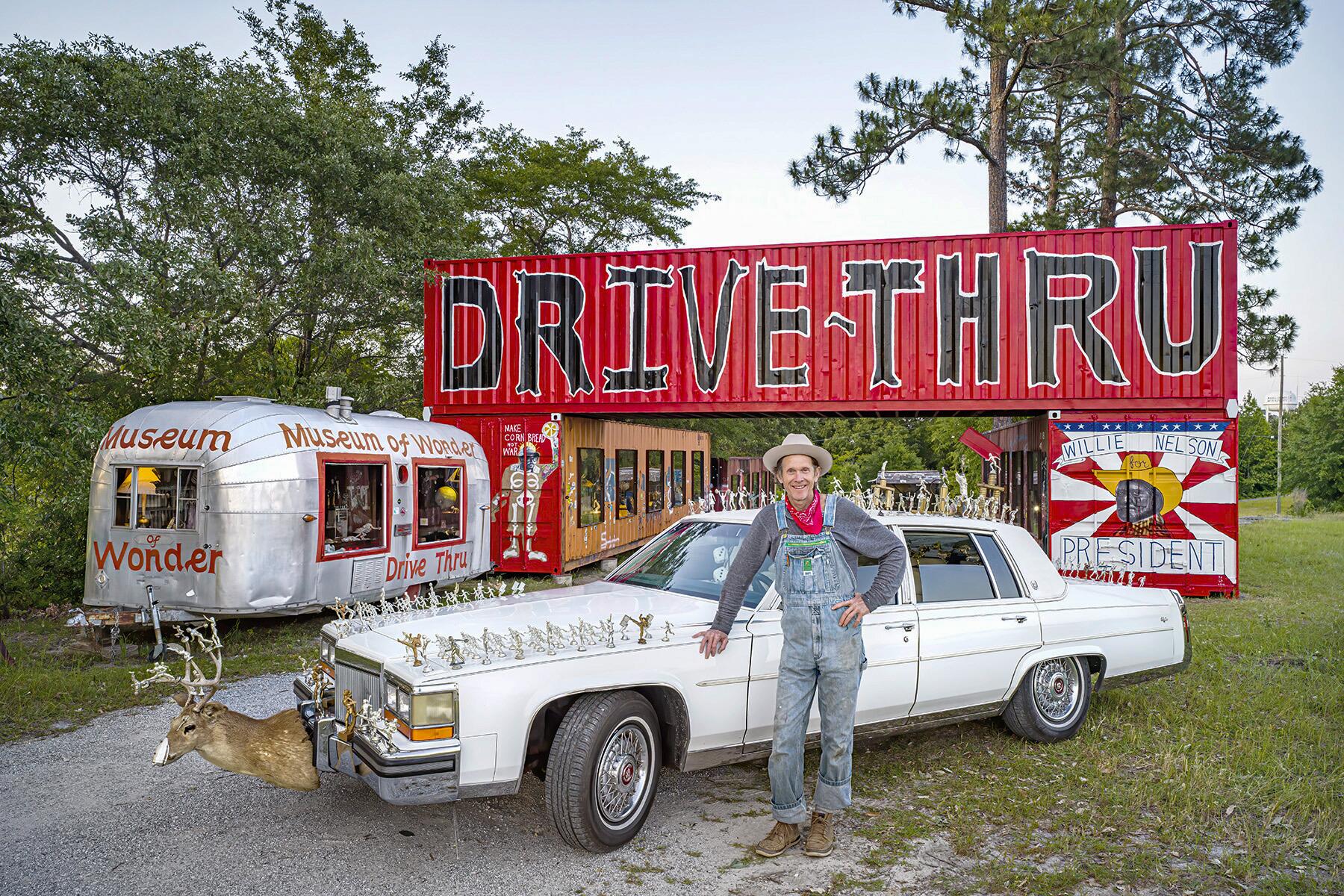 When Butch Anthony was 14, he built a one-room log cabin as a workshop. This one-room log cabin would eventually expand to be the Museum of Wonder, which has showcased a unique collection of art, antiques, and other curios. It became so popular that, in 2014, Anthony added The World’s First Drive-Thru Museum. The museum, which is made out of shipping containers, displays Anthony’s creations as well as other interesting curios from his collection. The whole thing can be experienced without ever leaving your car—though you’ll be sure to be hitting the brakes in order to take in all the wonderment this drive-thru experience has to offer. 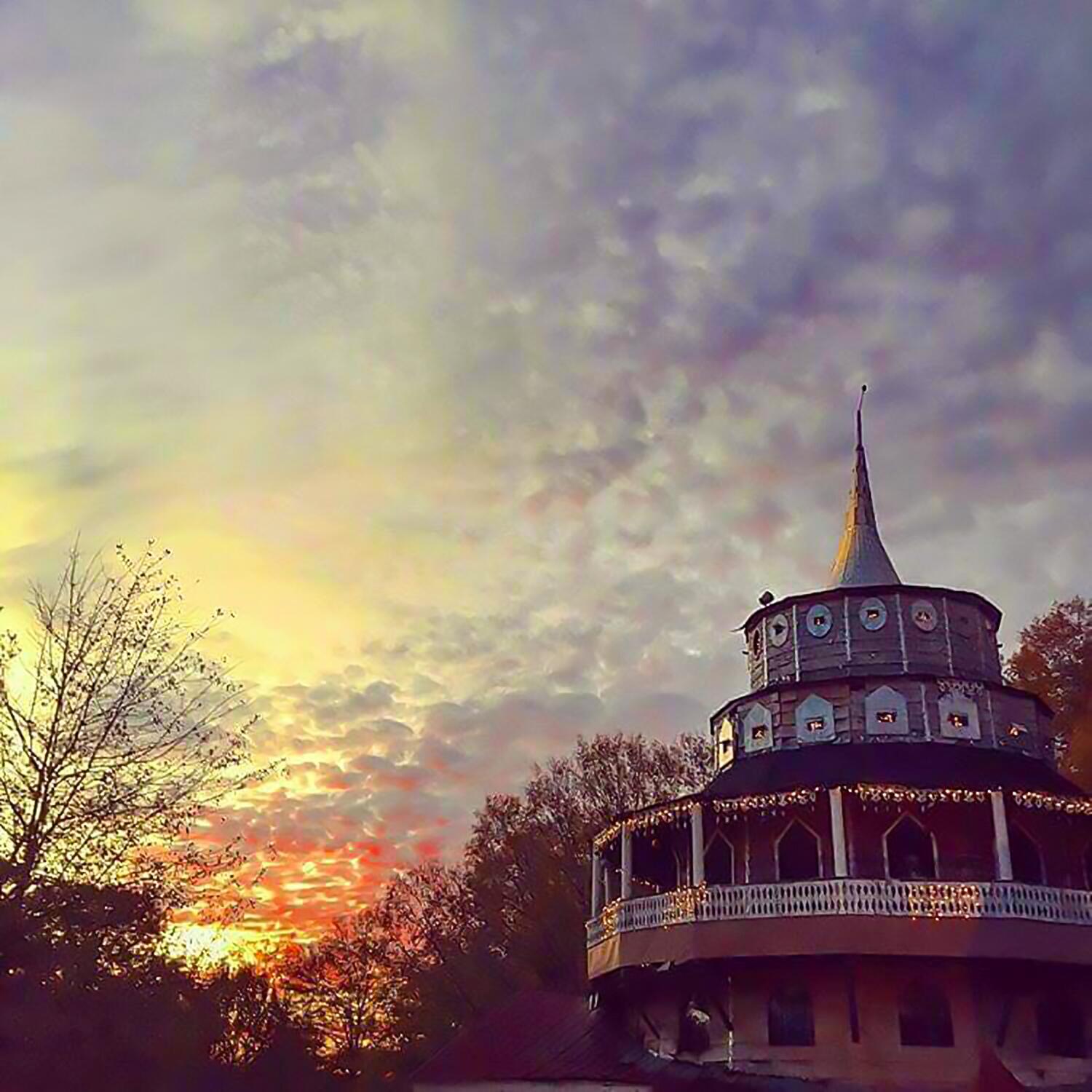 Reverend Howard Finster is perhaps one of the best-known self-taught artists in the U.S. Finster started receiving widespread notice in the mid-1980s when R.E.M. filmed the video for their song Radio Free Europe in Paradise Gardens. He would go on to design album covers, including Talking Heads’ album Little Creatures, which was named the best album cover of the year by Rolling Stone. But when he started making art, it wasn’t out of a desire to garner fame and/or acclaim, rather he was acting on a divine vision he received imploring him to create sacred art. And create he did. In his lifetime, Finster would create over 46,991 pieces of art—many of which can be seen throughout this two-acre garden.

If you’d like to immerse yourself even more in this paradise of folk art, you can check in to one of the onsite suites for a night. 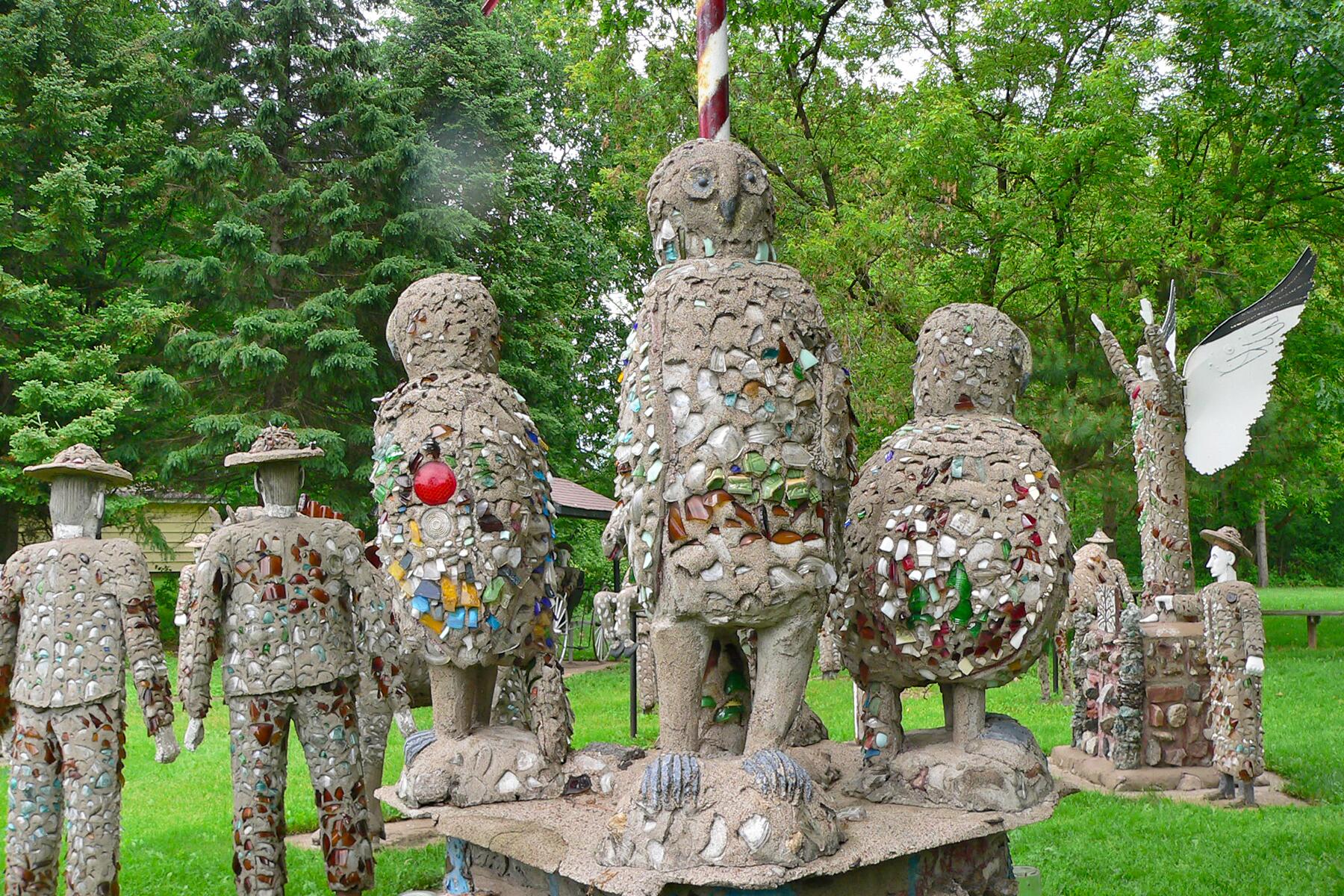 When Fred Smith retired from being a lumberjack at the age of 62 in 1948, he started to populate his house’s outdoor rock garden with concrete sculptures, many of which are detailed with pieces of glass bottles, mirrors, and other found materials. Over a 16-year period, Smith would create over 200 concrete sculptures, many of which depict historical and mythical figures. 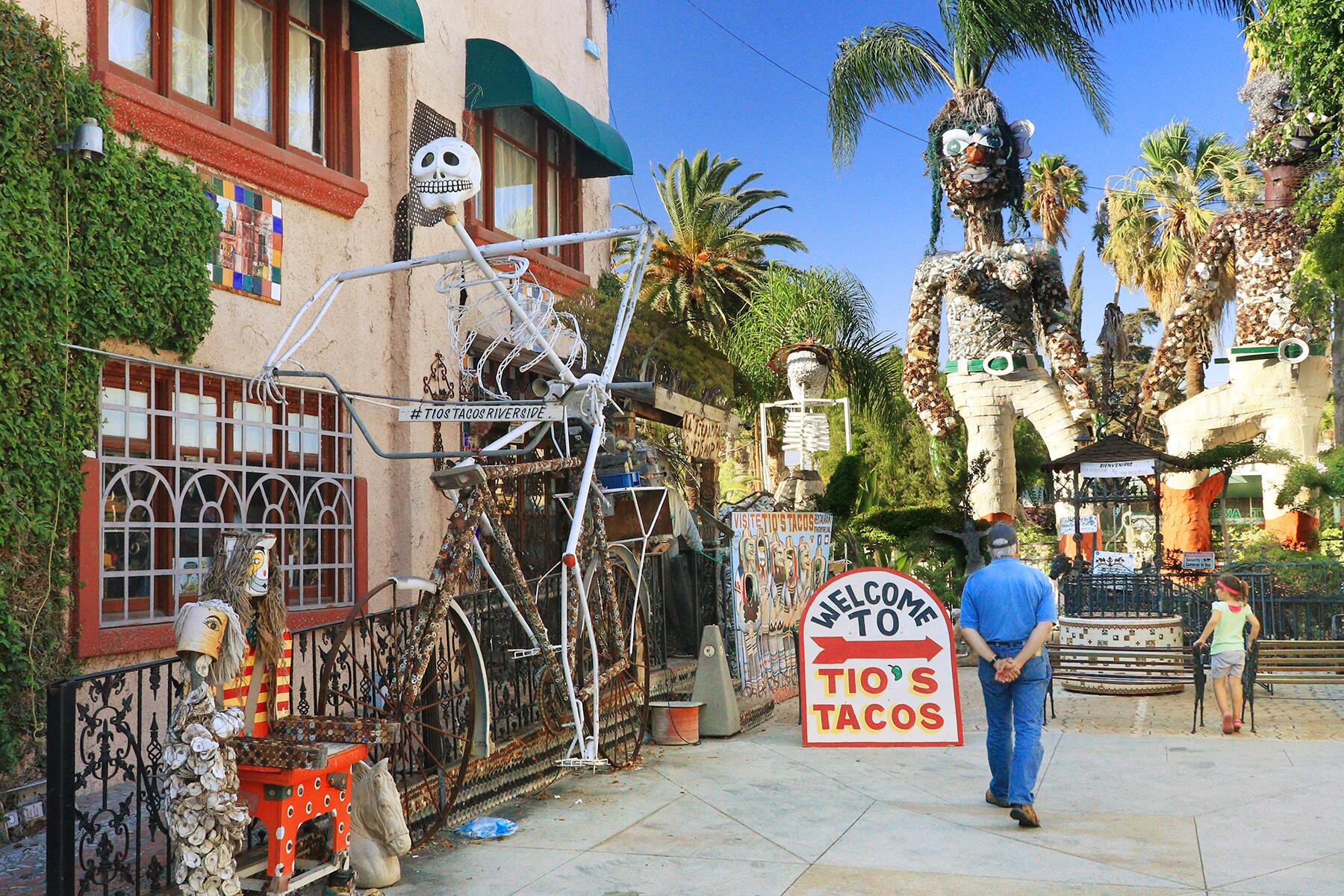 At Tio’s Tacos, you’ll come for the delicious fast-casual Mexican fare, but you’ll stay because of the acre’s worth of incredibly eclectic art. This combination eatery and folk art garden is the work of Martin Sanchez, the artist and co-founder of the restaurant. Here you’ll find elaborate sculptures and tableaus as well as a chapel made of concrete and glass bottles. They say one man’s trash is another man’s treasure, but at Tio’s truly one man’s trash is another man’s art. 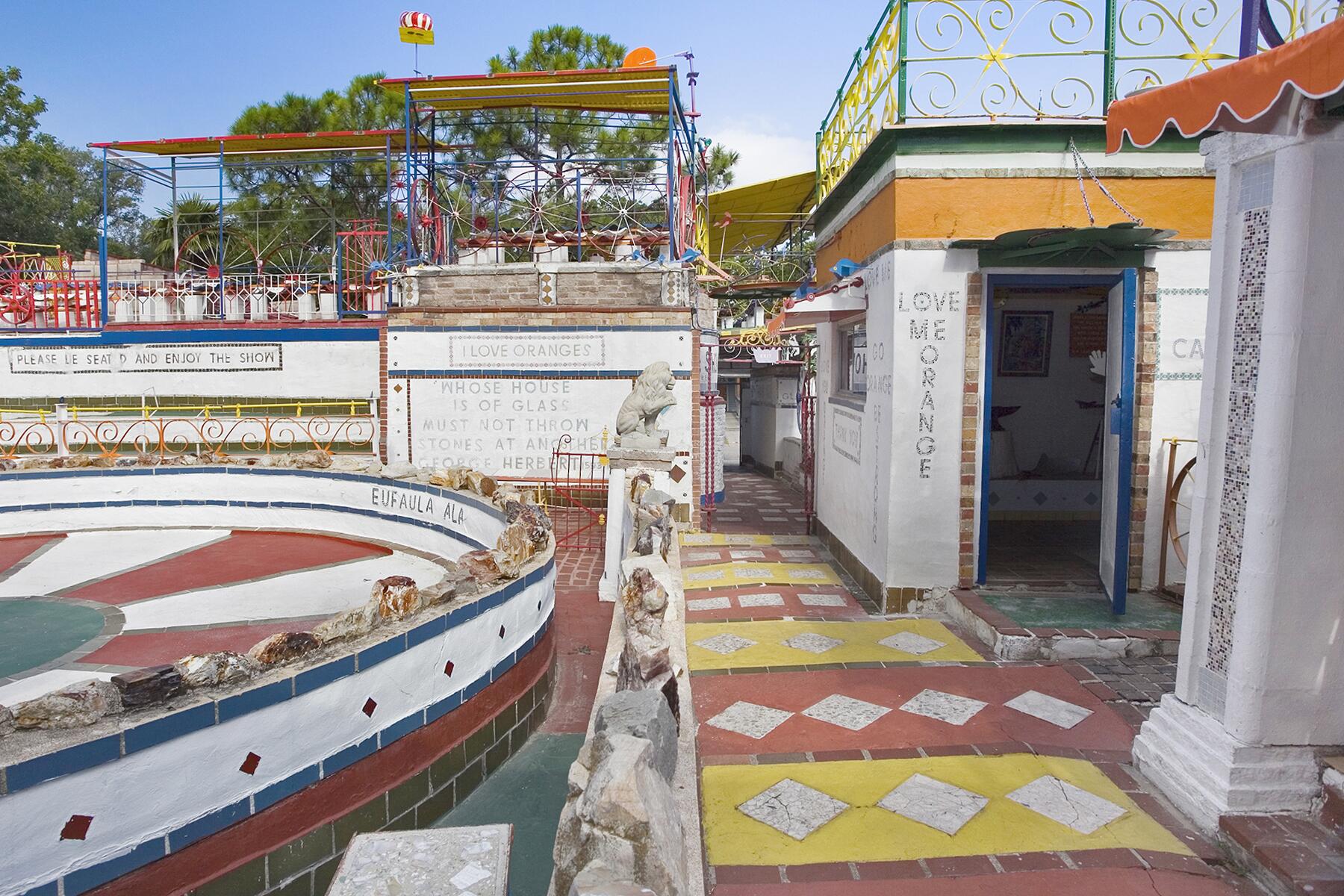 Do you have a favorite fruit? Have you ever been so compelled by said fruit that you decided to name a venue you built with your own two hands for decades after it? That’s (partially) the story of Jeff McKissack, who developed his affinity for the brightly-hued citrus while delivering them during the Great Depression. Years later, he would start to build the Orange Show, using whatever materials he could get his hands on. Though McKissack would pass just a year after opening the labyrinthine structure to the public, a non-profit was formed so that the Orange Show could serve as a center for folk art. 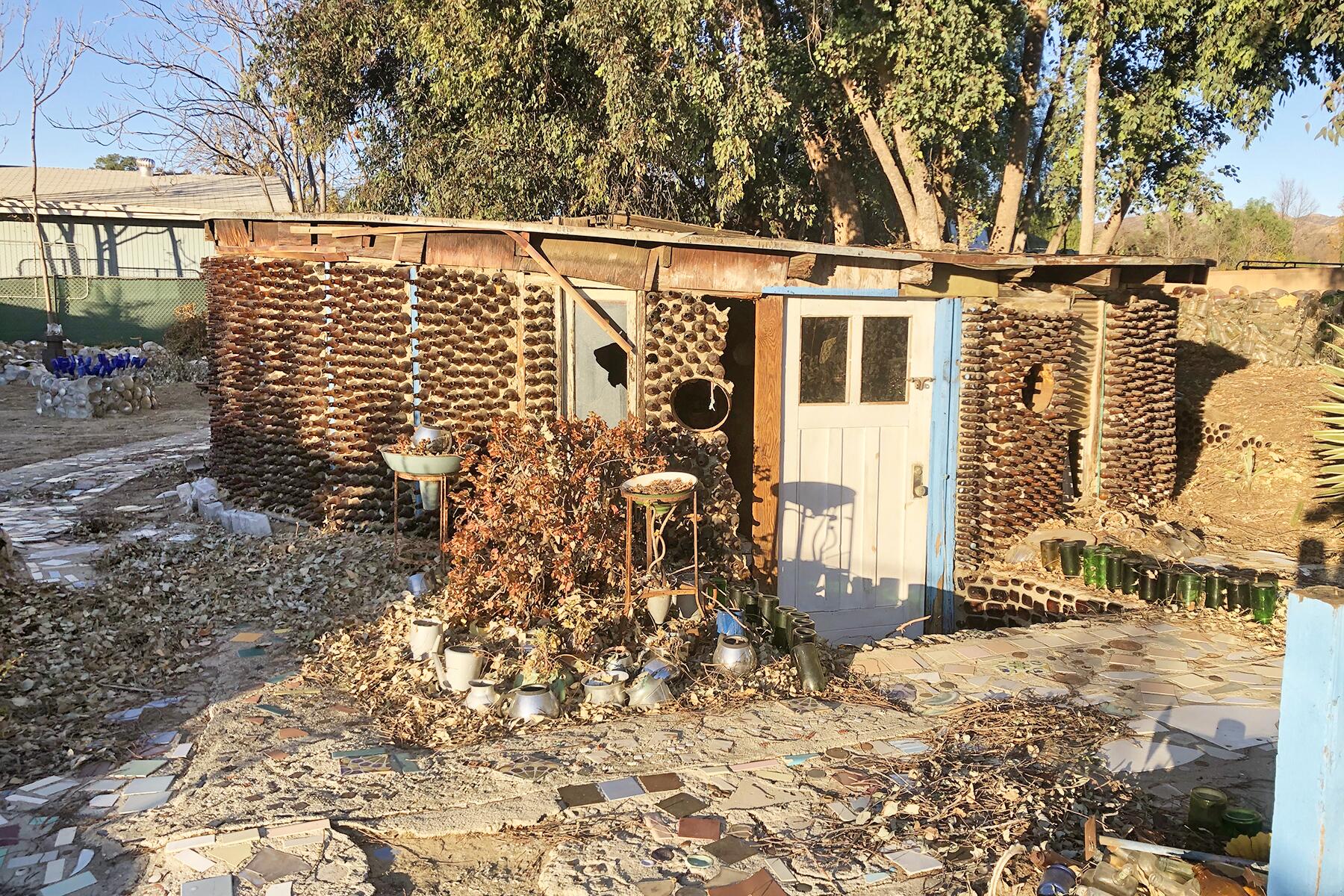 If you’re a responsible wine lover, you presumably make sure your empty bottles find their way to the recycling bin. But have you ever thought about recycling them in an elaborate architectural project? That was what Tressa “Grandma” Prisbrey accomplished on her 1/3-acre lot in Simi Valley, California. In 1956, she started collecting colored bottles from the local dump and crafted them into a series of structures that were meant to house her personal collections—but over the years has also brought a sense of joy and wonder to the village’s visitors. 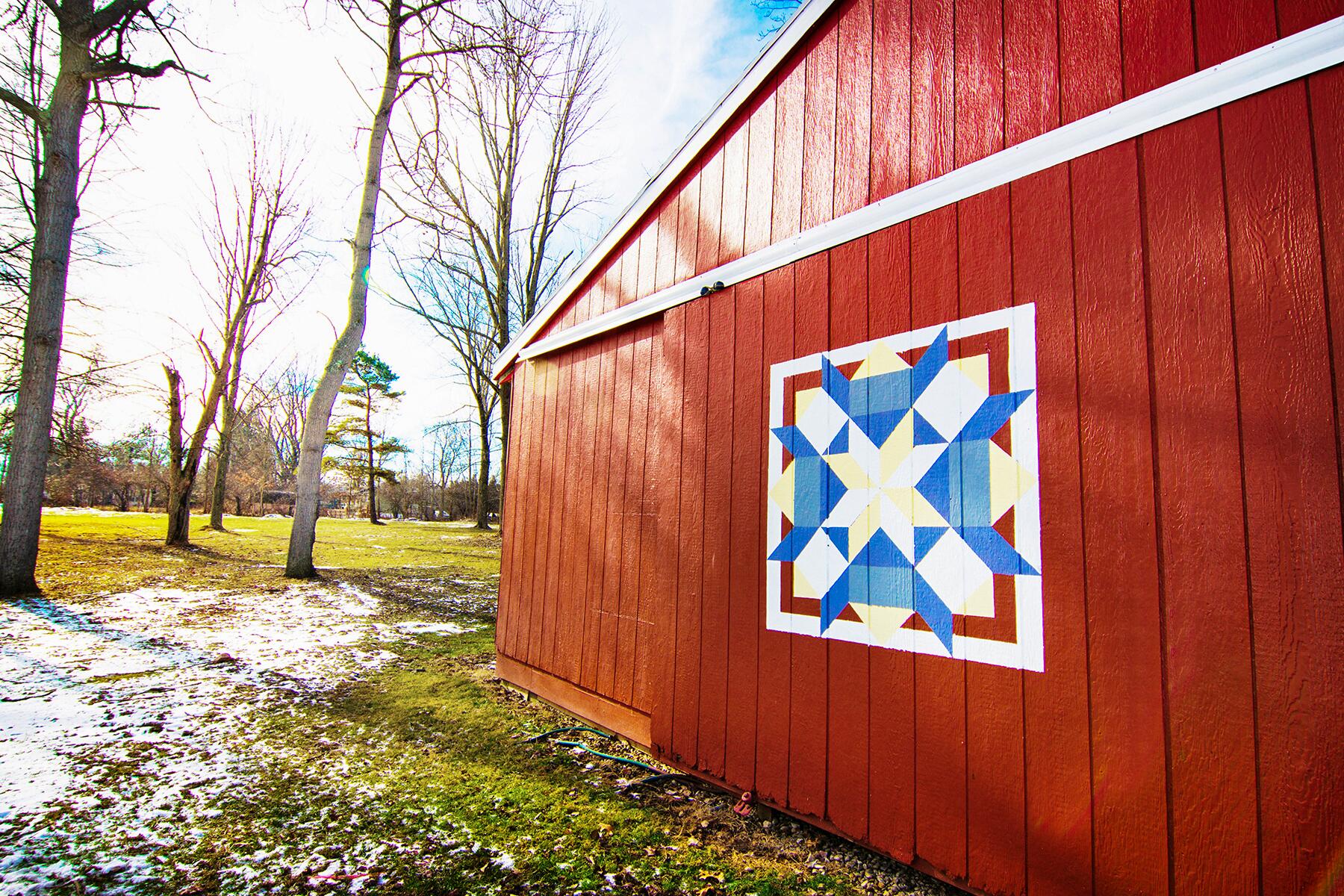 WHERE: Throughout the U.S.

If you’re driving around rural Tennessee, you might notice that some barns have been affixed with squares that feature colorful, geometric designs. These painted, wooden squares are referred to as barn quilts because the design is meant to resemble a patch on a quilt. There are a number of quilt trails—communities where people have affixed their barn with a quilt square of their own—throughout the country. So all you need to do to take your driving tour of this tradition is a database to map out your journey. 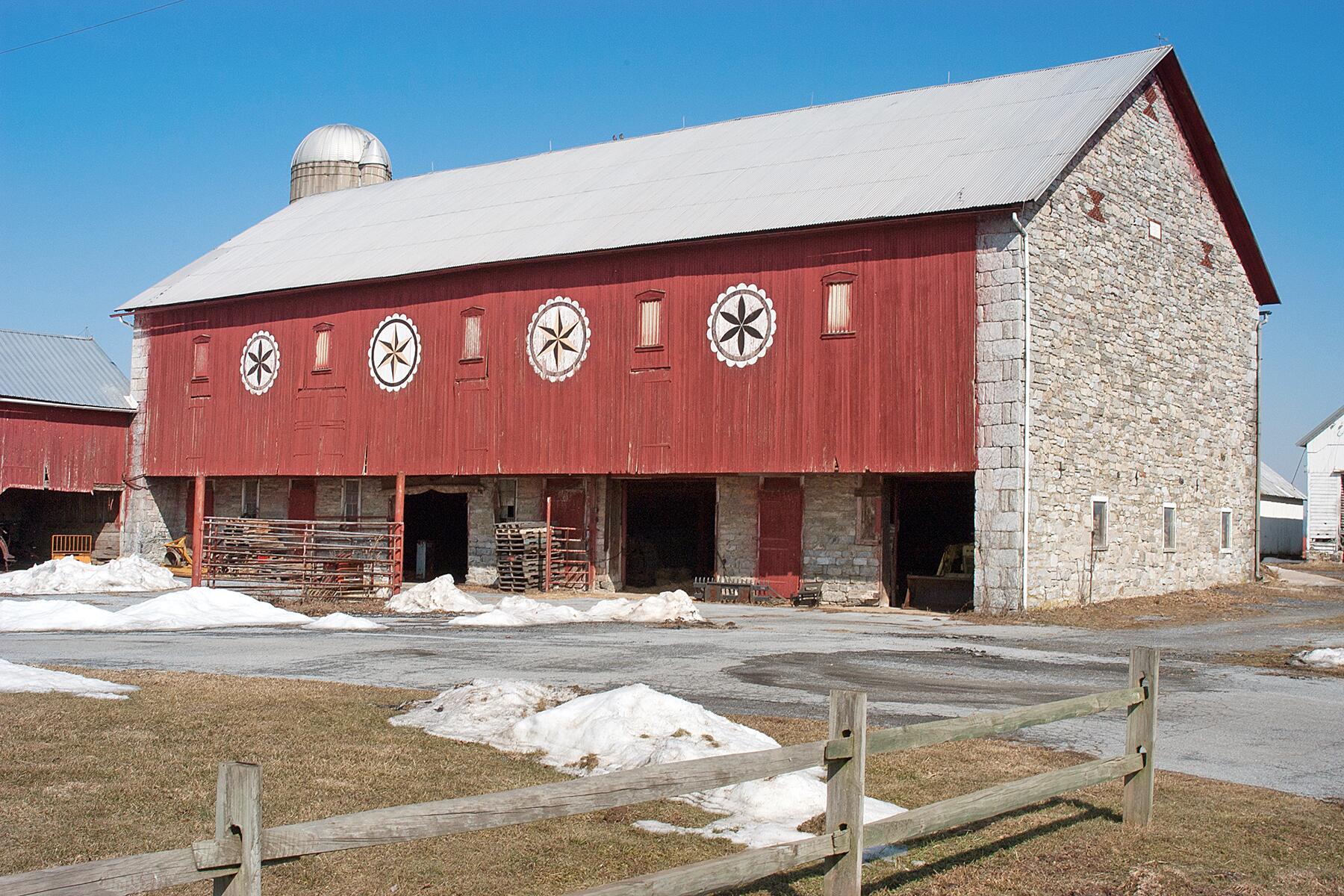 A sort of precursor to the barn quilts, hex signs have been used to decorate barns in Pennsylvania Dutch Country since the 19th century. Traditionally, they’re designed to resemble stylized, multi-pointed stars. There’s some debate about whether the signs have origins in folk magic, but what’s certain is that they’re beautiful works of art. 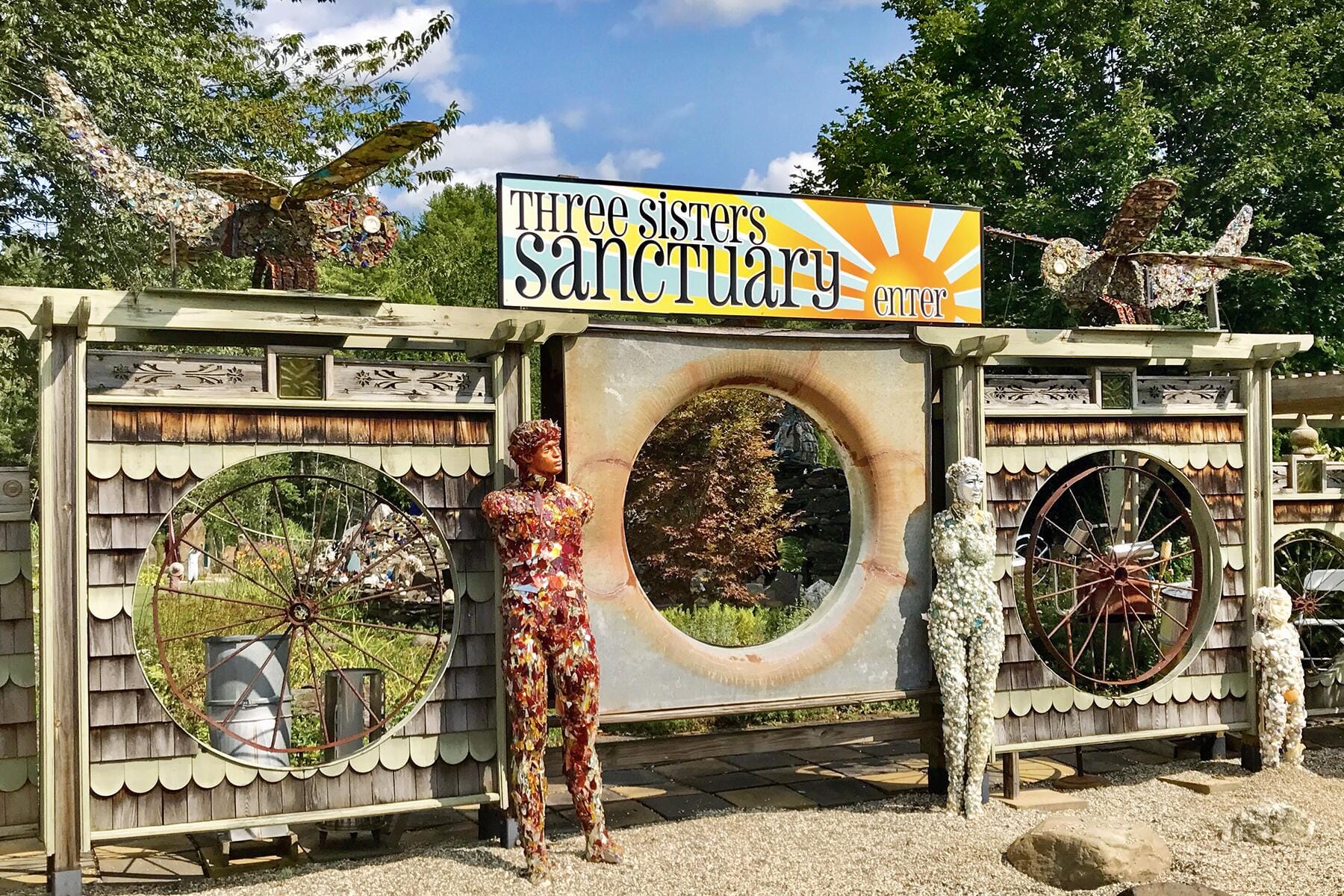 The Three Sisters Sanctuary is the work of environmental artist Richard M. Richardson. This environmental art installation and sculpture garden, which is named in reference to his three daughters, features art that’s been set among beautiful gardens. Visitors who find their way here will be able to truly take refuge in this seamless blending of art and nature. 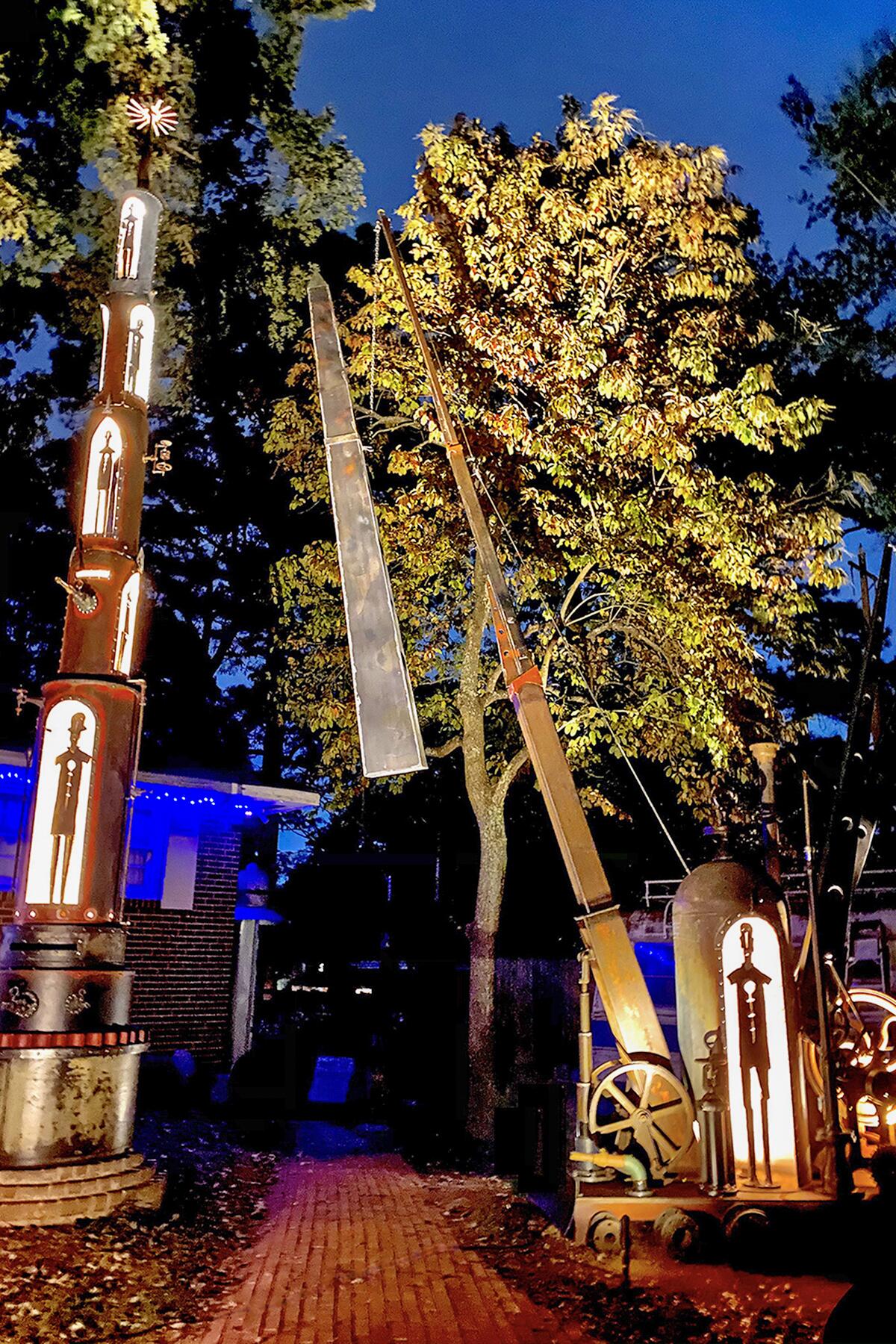 Clark Ashton started creating metal sculptures in his yard in 1989. Decades later, the metal sculptures have taken over the front and back yard of the house, including “The Commuter Gallery”—a reference to the traffic that’s a fixture of the area.