Fair warning: Philadelphia’s long-awaited, $200-million-funded relaunch of the prestigious Barnes Foundation is less a relocation than an astonishing rebirth. "Astonishing," because the city is now home to a magnificent new museum packed with 181 Renoirs, 69 Cézannes, 59 Matisses, 46 Picassos, and 7 Van Goghs, along with many other fabled masterworks of Post-Impressionism and Early 20th Century art.

But even more astonishing is the fact that, for the past ninety years, all this legendary art was allowed to languish in a secretive and sequestered estate nearly hidden in the little town of Merion, Pennsylvania. Only open to a select few (initially, only 200 art students annually), this museum was becoming a mummy.

When Dr. Barnes, one of the art world’s richest eccentrics, suddenly died in 1951, his will required—a la Miss Havisham in Dickens’s Great Expectations—that every painting had to hang in the doctor’s quirky galleries "in perpetuity," effectively mothballing the museum. Soon enough, the limited visitation, poor lighting, cramped, ill-designed exhibit spaces, and crumbling arboretum made the Barnes the "neediest" museum in America.

Now, only ten years after a visionary board of trustees decided the better part of valor was to find a way to honor Barnes’s spirit, if not his words, the old place was packed up and moved to a new, spectacular museum on Philly’s grand Benjamin Franklin Parkway. With its two-week opening festivities just concluded over the Memorial Day weekend, the votes are now in. The Barnes is a winner! We can’t get Mr. Renoir on the phone but if we did we’re sure he’d join most of the critics who have given the new museum a big thumb’s up. 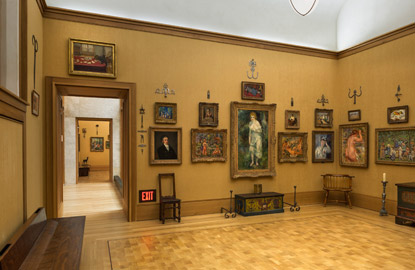 Largely thanks to a brilliant modernist setting created by architects Tod Williams and Billie Tsien, the greatness of this famed collection of art is only now revealed, due to a new design that lends a sense of intimacy between viewer and object, while at the same time increasing one’s appreciation of capital-A art.

Initially, observers thought the design team would be facing an impossible task: Recreate 23 historic galleries from the old Merrion building yet give the Barnes a new contemporary persona. Now, $150 million later, Williams and Tsien have triumphed with a design that is both timeless and monumental. Warmed by walls of tawny-colored Negev sandstone, centered around an enormous "Light Court"—the perfect place for gallery-goers to reflect on art—and entered through a narrow "mood tube" of reflecting pools and soaring trees (to make you feel you are entering a place of art and beauty), this design may be minimalist in style but mellow in impact, so unlike NYC’s chilly MOMA. Inside, Williams and Tsien winningly use an interior garden, library, restaurant, two classrooms, and café as buffer zones—"cloisters" is the architects’ term—to the rooms hung with the core collection. 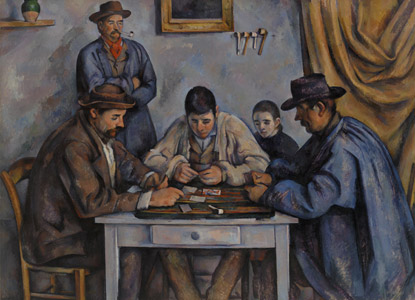 These buffer zones are needed to lessen the shock of entering the actual art galleries. Hung on walls hung, as in a 19th-century "salon," with paintings stacked four deep up the walls, these rooms—recreated from the old galleries in the Merrion building—look as if frozen in amber (thankfully so in one respect: if each painting was spread out as in most museums today the Barnes would have have needed a building five times as large). Barnes’s ultimate goal was to help people "see as an artist saw" and to do this he created, for each wall, an "ensemble" of mirror-like symmetry: a Matisse could hang side-by-side with a Goya, above an African sculpture, and below a Old Master sketch and a metalwork "utensil" (such as iron forks, French tin shoe-buckles, or nutcrackers).

But for Barnes, the proper study of art—he saw his galleries as "classrooms"—only involved elements of shape, color, and form, and had to steer clear of the influence one style may have had on another (there are no labels except for the artist’s last name). Creating a hypothetical rivalrous interplay between an El Greco and a Picasso, he hoped to neutralize the effects of geographic and psychological barriers. By underscoring the paradoxical affinities of a Soutine and an African sculpture, he thought he could pierce the very essence of art.

Many thought that the replication of the Merrion rooms would make the art look dead but something marvelous has happened: the new lighting system makes all the paintings look astonishingly fresh, almost as if the artists had just put down their palettes. Tinted to filter out damaging ultraviolet light, the windows now only let in 14% natural daylight but the effect is such that critics thought that all the paintings had just been cleaned. Cezanne’s Boy with Skull, famed for its blue-grays, turns out to have many greens. For the first time, all the paintings are liberated from the dark salons of the Merrion building and the result is revelatory.

How to Do the Barnes

Since each wall is crammed with as many art treasures that would fill an entire room elsewhere, gallery-goers should pace themselves: do a few rooms at a time, and then take a reflective break in the Light Court, library, or restaurant. Luckily, whatever you may think of Barnes’s wall "ensembles"—and Derek Gillman, the director, chuckled on a press tour that "he can’t quite forgive Dr. Barnes for putting two great Van Goghs in the corners"—the masterpieces speak for themselves.

Sadly, that’s not enough for some critics. They say other than the blockbuster paintings—such as Seurat’s Models, Cézanne’s Card-Players, Van Gogh’s Postman Roulin, Matisse’s La Danse, and La Bonheur de Vie—much of the collection is second-rate (yes, it is possible to have too many Renoirs). Others jeer at, as one blogger put it, "Barnes’s crackheaded, migraine-inducing jumble of ‘education’." But many others praise the new Williams/Tsien additions, particularly the side galleries that will permit more curatorial prowess.

The first show is devoted to Barnes himself (how courageous he was to collect this kind of art when others were vilified for buying it). There’s also the thrill of the art chase, conveyed in his old letters and telegrams.

Thanks to this spectacular new museum, Dr. Barnes’s art finally looks great and, in fact, it makes you appreciate how good a collector Barnes was. It is safe to say that most museum-goers will find the new Barnes Foundation a work of art in itself. 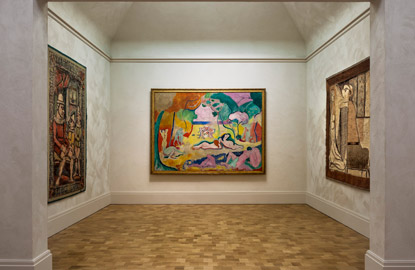 Tickets and Other Details

Due to the worldwide interest in the newly opened museum, it is highly recommended that you book your tickets in advance: either by visiting BarnesFoundation.org or by calling (866) 849-7056. The museum itself is located at 2025 Benjamin Franklin Parkway (adjacent to the Rodin Museum and the Free Library); the main phone is (215) 278-7100.

Admission is $18 and hours are: Wed.-Thurs., Sat.-Mon., 9:30 am to 5 pm; Fri., 9:30 am to 10 pm (note: free concerts are offered Fri. eves); closed Tues. Parking is available on site on a first-come, first-serve basis (rates vary by length of stay). For the full calendar of concerts, guided tours, classes, and seminars, see the Barnes website.