Peter Greenberg on “The Traveler’s Diet” 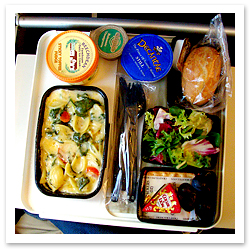 One day a couple of years ago, NBC travel guru Peter Greenberg stepped on a scale and had a little wake-up call—somehow he’d ballooned to a whopping 284 pounds. How is it, he mused, that a guy who’s always on the go (he logs an average of 400,000 air miles per year) get so big? Thus began Greenberg’s greatest odyssey to date, from livin’ large to livin’ lean. His new book, The Traveler’s Diet, chronicles this journey and describes in great detail how Greenberg shed 70 pounds by, among other measures, shunning airplane food and retraining his thinking about eating while traveling. The book is a funny, personal, non-judgmental approach to weight loss that will ring true for both travelers and non-travelers alike. We recently communicated with Greenberg about the book via email.

Q: Is all airline food terrible?

A: Airline food is by definition recooked twice. It’s cooked first in a kitchen and then reheated on the plane. That’s the first problem. These days, the airlines smother their food, such as it is, in heavy sauces in a pathetic attempt to maintain moisture content. If not that, the airlines load you up on heavy starches and sodium—pizzas, that sort of thing. Foreign carriers serve better food.

Which airlines are doing a better job providing healthy alternatives to junk food?

Sadly, few. The good news is that many airlines have switched to name-brand items in their snack boxes. The bad news is that you can now identify the items—Oreos, Doritos, etc.

They’re getting better. In The Traveler’s Diet we analyze the food offerings at 22 major airports in the U.S. and provide healthy—or healthier—food choices at vendors throughout these airports.

For people who’ve sworn off airplane food, how do you stave off hunger?

Simple solution: BYO. But please, out of courtesy to other passengers—and to me as well—don’t bring cooked/heated food on board. In addition to the fact that it tends to be messy, it smells. Nothing smells worse than the odor emanating from the McDonald’s bag being held by the guy sitting next to you.

What is the biggest diet-killing-no-no that almost every airline serves that should be avoided like the plague?

In coach, just about everything. In first class, the warm mixed nuts are delicious, but a diet killer.

Everyone knows we’re supposed to drink a lot of water when we fly, but does that include the tap water on the plane?

We should all be drinking bottled water on airplanes but just because you see the flight attendants coming down the aisle carrying a tray of water and an open bottle doesn’t mean you should drink that water. Unless you actually see the flight attendant physically open a new bottle of water and hear the snap of that cap, don’t drink it. Why? Many airlines do not stock enough bottled water on their flights, and when they run out, some flight attendants have been known to go back to the galley and refill those bottles with water from the plane’s holding tanks. And those tanks are the bacteriological equivalent of the bar scene from Star Wars! In fact, in The Traveler’s Diet we detail the inspection reports from the EPA and what they found. It isn’t pretty. So stock up on your own small 8-ounce bottles of water and bring them with you when you travel.

What is Greenberg Axiom #1?

When you’re hungry there’s an excellent chance you’re probably not. Instead, you’re sleep deprived and your brain is sending a false signal to your body that you need to eat when in fact you’ve already eaten. So given the choice of the Snickers bar or the can of Pringles at midnight in your hotel room, remember this: You’re not hungry—just drink one of those 8-ounce bottles of water and all will be well.

Do you live in fear of the hotel minibar?

Not any more. I ask the hotel to either lock or remove the minibar. And the reason is because if you stare at that Snickers bar long enough, you are going to eat it!

Many hotels are offering healthier menus at restaurants, but as you say even the most “well-intentioned hotel menus can be traps.” How so?

An asterisk on a hotel menu means they’re at least trying to do the right thing by listing that menu item as a healthy choice. The problem is that the guy in the kitchen cooking all the chicken doesn’t necessarily know you’re ordering the healthy chicken, and he’s smothering all the chicken in butter. Unless you come up with a mutually agreeable definition of terms with your waiter, you’re going to be stuck with the butter-lathered chicken. And just ordering sauce on the side isn’t the answer. It still might be cooked with butter.

Which hotel chains are making strides in promoting healthier eating, and what is it they’re doing to make a difference?

Marriott and Hyatt are making strides to change not only their menus but the way their chefs approach food, especially with children’s menus—most kids’ menus these days have deep-fried, breaded items.

If it’s true that the average person gains eight pounds on a seven-day cruise, then doesn’t it make sense to start dieting before the cruise, the logic being that you’re likely to start overeating the minute you set sail?

Exactly the wrong way to go—yo-yo approaches to eating always fail. Keep in mind that most people taking a cruise will tell you that having a fitness center or health club on board is a reason they booked the cruise. Problem is only six percent or less of all cruise passengers actually use it. Make it your first stop at least every other day on the cruise, and then you can eat healthy and not gain weight. But remember, there are about 14 separate meals offered on every cruise every day, but where does it say in the manual that you are required to eat all of them?

For travelers on the go it’s not always possible to be near a gym, and quite often people end up in a city where healthy eating hasn’t caught on. How does one keep up the good fight lacking these important weapons?

One of the things we did in The Traveler’s Diet was come up with a series of simple, yet effective 20 and 30 minute exercises you can do in the privacy of your hotel room using your bed, a chair, the back of the door and your own carry-on bags. It’s amazing the workout you can get, and it’s simple.