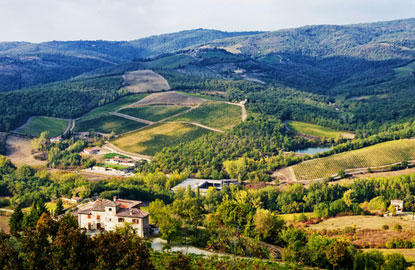 Fodor’s European Correspondent Pepita Diamand is a fashion stylist and blogger based in Paris.

We started planning our summer holiday back in January, when Monsieur had the romantic idea of somehow squeezing our tandem bike into our little A-class and driving down to the Italian Lakes via Burgundy for a bicycle trip built for two. Two weeks later I tripped and fell smack onto my left knee, doing the sort of damage that children always manage to avoid but that sends grown-ups to specialists.

The diagnosis was a holiday rethink. The rethink shifted between an elaborate trip to Japan, a classic Californian coastal drive, and a relaxing fortnight in Corsica. Japan was nixed because we would hit their rainy season (June was our intended month); California because of the fog; and Corsica because we go every year and to resort to our default for our first two week break in our five years together smacked of defeat.

Crestfallen and, if truth be told, arguing (at that point we were just 6 weeks from Monsieur’s scheduled and treasured time-off) I stumbled upon the map of our original tandem trip and hatched a new plan. Instead of packing the car with cycling kit, we’d load it with luggage filled with fabulous clothes for a scenic drive down to Tuscany, taking in some glam destinations along the way. An hour playing with Google Maps revealed our route:

Since Monsieur is a sucker for hilly landscapes, the question mark spot on the way back became The Jura, the rolling French countryside just outside of Geneva. As for where we’d stay, a combination of our connections produced an itinerary worthy of a truly fabulous wardrobe:

Portofino’s Splendido and Villa d’Este on Lake Como’s shore are hotels of legend. To have woven them into a driving holiday made me giddy. My last driving holiday was with my parents when I was 10, and that involved a succession of Ramadas between Toronto and New Hampshire, and a big rusty Buick that kept overheating. This would be very different. It would also require careful packing. 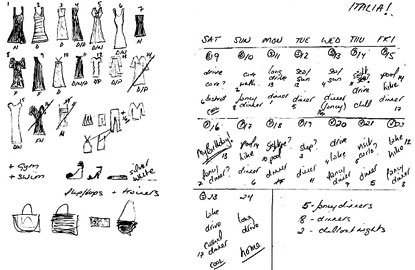 After due consideration, I drew up the packing list you see above.

As you can see, I’m more of a ‘mind map’ than a straight ‘list’ kinda gal. (Monsieur thinks I have an OCD. I just think I’m organised. Viva la difference.) The list takes into account a love of featherweight cotton and cotton-jersey dresses which are easy to pack and require minimal this-goes-with-that thought. Organised by function (N for night, P for pool, F for fancy night, and D for day) this list includes 17 dresses, from which I removed 3 in a last minute bid to fit a few more of Monsieur’s shirts into our shared suitcase.

A shared suitcase? I hear you gasp. For 15 days in some of the most glamorous hotels on the face of the planet? It can’t be!

That’s because Monsieur’s original tandem plan had, in his head, morphed into a one-man biking holiday. Certainly, he figured, his cross country bike (and all the gear, including, ahem, lots of lycra) would fit into the car if we kept our luggage load down. I calculated that I could make up for my sartorial sacrifice when we hit the outlet shopping mall near Florence.

I’ll let you know how my carefully curated suitcase fared when we get to Villa d’Este in a few weeks time. In the meanwhile, you can see more on PepitaStyleFile.com and follow my damn glam drive on twitter @pepitastylefile.