News Apeksha Bhateja What Are the Chances You'll Get Monkeypox at a Hotel?
NewsPerfect Autumn in NYC Itinerary

"Come closer! Everyone come on in! Once you’re all here I’ll start my spiel." The gent manning the Eve’s Cidery stand at New York’s bustling Union Square Greenmarket was strictly business. "Once I start I can’t stop and go back." 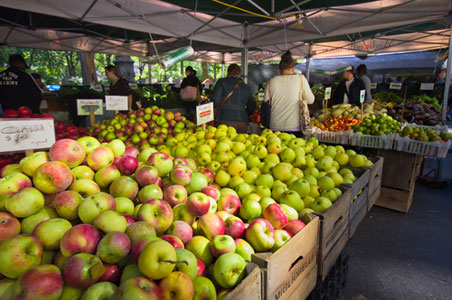 He launched into a well-rehearsed, ten-minute tasting session, our group of random passersby pressed tightly into his tent like campers around a crackling fire. Having just polished off an autumn special of killer Honeycrisp kimchi with maple labneh and Benton’s bacon at Momofuku Ssam Bar, I’d already had my apple a day, but when the cider emcee began pouring, how could I refuse? He tipped sips of each of the Van Etten mill’s artisanal elixirs, from the bone-dry Albee Hill to the sprightly Rustica to Essence, an ice cider pressed from late-harvest apples left to freeze during the winter, a process that concentrates their natural sugars.

"You sir, yes, I’ll be with you when I finish with this group. I can’t stop in the middle of this."

Strictly business. And you can’t blame the guy. It is autumn in New York, the best time to visit, and a Union Square Saturday market feels like the season’s beehive epicenter. The trees in the Square are going russet and gold, a microcosm of what Central Park is looking like across town. The air is clear as Eve’s ciders and smells like cinnamon and bread and roasting nuts, a pleasant change from summer’s eau de sewer. The city seems reinvigorated in October, comfortable and cool and almost cozy, not an adjective one typically associates with our country’s largest metropolis. 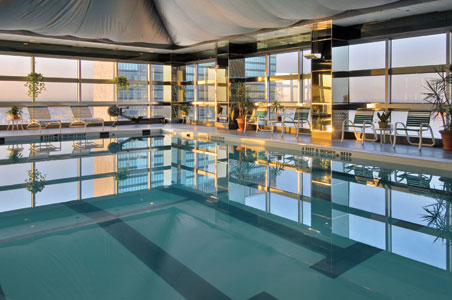 With its lobby of marble and mirrors and location in the shadow of the stark, concrete United Nations headquarters, ONE UN New York isn’t the usual picture of coziness either. But that feeling vanishes on encountering the staff; regularly dealing with international royalty, diplomats, and attaches has made them experts in the business of warmth and graciousness, making guests from as close as Jersey and as far as Sweden feel equally at home.

The West Tower underwent a full-body, $30 million dollar renovation over the summer. When the elevator doors slid open at the 35th floor, the hallway offered a modern salutation of soft grays and pops of juicy tangerine, a palette that continued in my room, where twin settees fronted a massive window-wall that looked west over a terrain of skyscraper peaks. Open umbrellas on the terraces, patios, and landscaped rooftops of the neighboring apartments fluttered like tiny flowers in the fall breeze.

With several bottles of Eve’s cider stashed safely in the room’s wet-bar, I got acquainted with Mandarin tea-scented Shanghai Tang toiletries in the travertine bath, where frameless glass and rainfall fixtures outfit the spacious shower, before heading to dinner in Harlem. Carved like a cave into an embankment of the Hudson Parkway, Covo feels like stumbling into a secret party in a handsomely dilapidated farmhouse. Rafters crisscross the ceiling, flanking chandeliers that look lifted from a French hunting lodge. Blocky wood tables rest on concrete floors, and glass doors fold back into brick walls, blurring the boundary between the dining room and the tables on 12th Avenue.

An inviting warmth permeated Covo, and it had nothing to do the wood-burning brick oven that produces excellent thin-crust pizzas. Big groups gathered at long tables, loud and laughing while they twirled house-made spinach fettuccine in short rib ragu. The friendly, young staff belted out "Happy Birthday" four times—four!—without a lick of disdain. In New York. Imagine that. 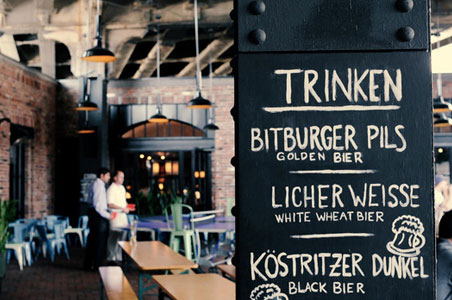 Later at the Standard Biergarten downtown, the surly tap mistresses could barely manage a smile, let alone a song, but there is scarcely a better place in Manhattan to while away an October night than this lively garden beneath the High Line. From Wall Street bond traders to Columbia bookworms, indie bandmates to Jersey bros, fashion models to night-off Marines, a real organic cross-section of the city milled about the picnic and ping-pong tables, fostering a chill, unpretentious vibe you might not expect from this hot-to-trot hotel.

After buying beer tickets from a kiosk by the entrance—prepaying sped along the process at the bar…slightly—and acquiring ales, we camped out in a canine-themed parlor off the main square while the temperature ticked down. Soon, it’ll be too cold for such exploits, but for a while longer autumn endures. Get to New York before it’s over.