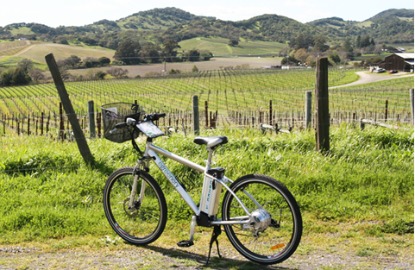 Dream of taking your next vacation on two wheels, but worried about keeping up with the group—or making it up the big hills, period? Consider hopping onto an electric bike, or "e-bike." Equipped with battery-powered, silent motors that can be set to various exertion levels, these special bikes provide a boost when riders need it most. E-bikes are generally heavier than traditional road bikes or hybrids—the motor and battery adds anywhere from 10 to 20 extra pounds—but they enable riders to go farther and longer than they otherwise could have, while eliminating the carbon emissions from cars or tour buses. With e-bikes becoming an increasingly popular option in bike-friendly destinations all over the world, here are a few options to roll with when you need a little extra pedal power.

Tackle some of the same routes as Tour de France athletes with the newly announced e-bike offerings from operator Discover France. One of just four licensed tour operators to the world’s most revered bike race, the company has added battery-charged hybrid bikes (the popular model Scott e-Venture 30) in three different sizes to its arsenal, with guided and self-guided tours available in the Loire, Provence, and Languedoc regions (independent e-bike rentals start from $147; a sample four-night guided itinerary in the Loire starts at $898 per person).

Discover France Loren Siekman notes that while e-bikes offer a great way for couples or groups to maintain a similar pace, riders shouldn’t expect the bike to handle all of the work. "You have to pedal while using it and let the battery and motor give added and welcomed assistance to your efforts," he explains. "The idea is all about pedaling, but getting that boost when it would help."

If San Francisco’s 49 hills, or the majestic but mountainous Marin Headlands across the bay, sound a little too intimidating to tackle on two wheels, consider e-powered cycling options. Cross the Golden Gate Bridge, which marks its 75th anniversary in May, on a bright yellow bike with the Electric Tour Company, the original pioneers of Segway tours. Guided e-bike tours ($80 per person) cover about eight miles, stopping at military monument Fort Point under the bridge, before heading across to the picturesque seaside town of Sausalito, where riders catch a ferry back.

Or, roll over to Wine Country, where, thanks to the e-bikes offered by Napa-based Change of Greenery, there’s no whining allowed—only "wine-ing," along several different routes through one of the world’s premier wine regions. Grab a bike from the company’s home base at the Napa Valley Marriott, and roll along one of several self-guided routes through wine towns like Napa and Yountville, as well as the renowned Silverado Trail. Along the way, take advantage of deals at more than 30 partner organizations, including two-for-one tastings at top-notch wineries like Trefethen and Baldacci, plus discounts at various restaurants and shops.

Bikes come equipped with baskets for bottles and other purchases, or simply text Change of Greenery founder Carolyn Nguyen a list of locations, and she’ll pick them up for you. The company will open for its third year of business on April 21; e-bike rentals are $50/day during the week and $75/day on weekends (Nguyen also plans to add a handful of traditional bikes to her fleet this year). Stay at the Napa Valley Marriott and take advantage of a $129 offer for two bikes, as well as a 10 percent spa discount.

Switzerland boasts some of the most extensive e-bike infrastructure in Europe, with more than 5,600 miles of well-marked trails and 400 rentals stations throughout the country. With the vast network of signposted cycling routes, dubbed Veloland, the Swiss have—not surprisingly—streamlined renting and riding to a seamless process; the most difficult part is choosing from dozens of regional and national routes. Rentals of Flyer e-bikes (a division of Swiss bike giant Biketec) are available at any number of spots all over Switzerland, as well as at battery exchange stations; check the Veloland website for station locations and rates.

If you’re looking for help arranging a route and transferring luggage, check out SwissTrails, a company that specializes in the popular, and stunning, Heart Route. A sample six-night itinerary begins in Lausanne and travels 263 miles to Zug. Priced from $1,056/person, with an additional e-bike supplement fee of $256, the rate includes accommodations, breakfast, luggage transfer, travel documents, and helpline access.