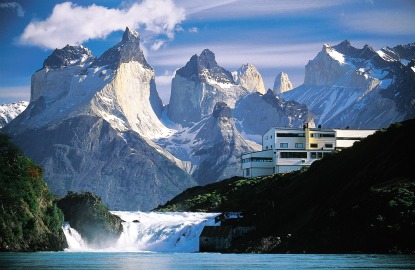 Just two months ago, a wildfire swept through the renowned Torres del Paine National Park, temporarily closing parts of the park and the iconic Hotel Salto Chico. While the park re-opened early this year, the luxury lodge will re-open its doors on February 23, just in time for the tail-end of the popular summer season in stunning southern Chile.

The wildfire, which started on December 27, 2011 and damaged roughly 42,000 acres of the Parque Nacional Torres del Paine, suspended operations in the hotel and prevented tourists from visiting most areas of the park. While much of the park’s terrain was affected, including the 300-year-old beech tree forests, returning and new visitors will still find the lasting beauty of the park—and help support the area’s rehabilitation.

As the only hotel instead the park, Hotel Salto Chico (run by luxury all-inclusive travel company explora), has an unbeatable location. After being closed for approximately two months, the hotel will resume operations following primarily ash- and smoke-related renovations; the structure of the hotel was not affected by the wildfire. "During the 50 days Hotel Salto Chico was closed, we worked assiduously to bring the lodge back to full operations and to expand our exploration offerings as never before," said Jesús Parrilla, CEO of explora.

High season runs from October through April, so there’s still time to visit during this South American summer. The hotel is offering several new half- and full-day expeditions, ranging from hiking to horse-back riding, that explore the area’s natural terrain and wildlife. Travelers to Torres del Paine are drawn to the park’s dramatic glaciers and rock formations, juxtaposed against azure lakes.

Thinking of a trip to Patagonia? For up-to-the-minute hotel and restaurant recommendations, plus the best planning advice, check out our online Southern Chilean Patagonia Travel Guide.