News Apeksha Bhateja Have $340,000 and Want to Vacation in a Survivalist's Paradise?
NewsParis’s Best Picnic Spots

Parisians excel in many areas, but two in particular: eating well and relaxing. So what better way to exercise both areas of expertise in one go than with a picnic? To help you picnic like a local, we put together a few of the prettiest and most picnic-worthy parks in Paris where you can spread your blanket, pop open a bottle of something, and enjoy the great outdoors comme les Francais. 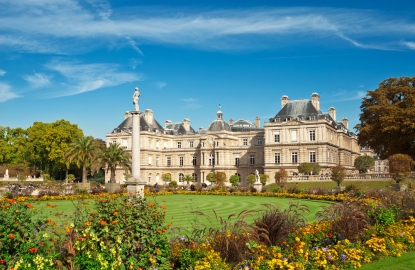 If you want to feel like a queen, take leave of your many duties in a park commissioned by one; Marie de Médicis, the queen consort of France, ordered the building of Jardin du Luxembourg in 1610 with the intention of creating a replica of her home in Italy. Today, the Luxembourg Gardens are located in the center of Paris, in the 6th arrondissement of Saint-Germain de Près, allowing you to sightsee and lunch at once. The park features both English- and French-style gardens, and depending on which you’re in, you can either spread out on the grass or set up camp in a circle of comfy chairs.

Prime Spot: If you arrive early enough to nab said chairs, circle a few around the pond (Le Grand Bassin) that sits south of the Palace of Luxembourg for the best view of all the action (read: people watching) in the park.

How to Get There: Metro to Luxembourg (RER), Notre-Dame-des-Champs 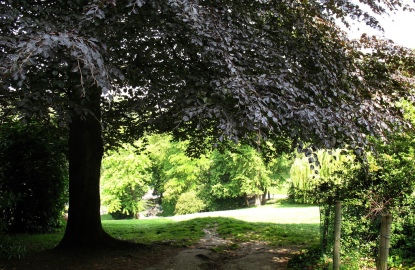 Best Place for Some Splendor in the Grass: Parc des Buttes Chaumont

Located in the 19th arrondissement, this park is a bit off the beaten path for visitors who either have limited time or are focusing their sightseeing efforts on the city’s more central areas. But those who make the journey (it doesn’t take as long as you think on the Metro) will be handsomely rewarded with the more wild landscaping than many of the other manicured parks: gentle rolling hills, sweeping views of Paris, a waterfall, running paths, a bridge, a small lake, rock formations, a playground—Parc des Buttes Chaumont has it all.

Prime Spot: On the hill between the waterfall and the path to Temple Sybille, where you can enjoy the calming sound of babbling water as you eat. You’ll (almost) forget you’re in a bustling capital city.

How to Get There: Metro to Buttes Chaumont 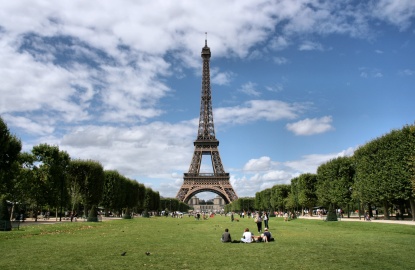 You’re in Paris, so you can’t (and shouldn’t) avoid the iconic 1,050-foot elephant in the room known as the Eiffel Tower. Load up your picnic basket and head for the Champs de Mars, the great grassy area that stretches out in front of La Tour Eiffel. It’s picture perfect for a picnic and crowded with locals and tourists alike who want to bask in the sheer Parisian-ness of the scene.

Prime Spot: Set up camp anywhere on the grass directly in front of the Eiffel Tower; there are no bad seats.

How to Get There: Metro to Champs de Mars, École Militaire, La Motte-Piquet-Grenelle 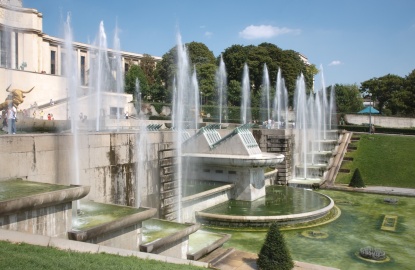 The Champs de Mars can get pretty lively at night, with crowds of people dancing and enjoying wine, some more copious amounts than others. If you’re looking for a little more romance, a little less loud music, but don’t want to forgo the beauty of the view, head across the Seine to the Trocadèro in the 16th arrondissement, where you can take in the view fountain-side.

Prime Spot: Snag a spot on one of the grassy areas facing the fountain.

How to Get There: Metro to Trocadéro 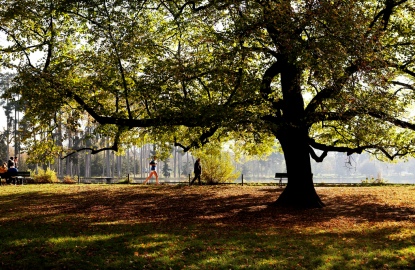 Best for Taking in the Country Air: Bois de Boulogne

Parisians familiar with America often refer to Bois de Boulogne as the Central Park of Paris, but in reality, this Parisian park on the edge of the 16th arrondissement is almost three times bigger than Central Park. There’s a lot going on once inside the park—bowling, bike rentals, the Musée National des Arts et Traditions Populaires, a racecourse—but we recommend renting a boat for a few euros pre- or post-picnic on the grass. Or skip the wicker basket thing and take the boat on a quick trip across the small lake to Chalet des Iles, an upscale restaurant.

Insider Tip: Leave the park at or before sundown. It’s safe during the day, but at night, it has a reputation as being a hub for prostitutes.

Prime Spot: Unfurl a blanket on one of many grassy areas surrounding one of the two lakes, on the east side of the park, close to Port Dauphine.

Now for what to eat. When it comes to picnics, simple is key: a baguette, a little cheese, a charcuterie plate, some fresh fruit, and, of course, a bottle of wine. But you’re in Paris, so the options are endless should you want to expand. If convenience is a priority, find the nearest Leader Price or Monoprix (which, of the two, has the better wine selection), both grocery stores with a wide selection of cheese, produce, cookies, and more.

But for a real taste of Parisian life, take in one of the city’s many markets. We like Marché Raspail, in the 6th arrondissement, between Rue du Cherche-Midi and Rue de Rennes. Mondays and Fridays are regular market days and Sunday is an all-organic market, and you’ll find a huge selection of produce, wine, cheeses, meats, fish, and prepared foods. Or head to Rue Cler, in the 7th, which is a permanent market street and also has a good selection of picnic-perfect items.

Insider Tip: If you go to Marché Raspail on a Sunday, line up for one of the caramelized onion galettes, at the end of the market farthest from the Rennes Metro station.

For up-to-the-minute hotel and restaurant recommendations, plus the best planning advice, check out our Paris Travel Guide.