Deals Leila Najafi Attention West Coast: You Can Now Book Flights to Paris for as Little as $321
Home  >  News   >   Paris With Kids

Paris is often promoted as an adult destination, but there’s no shortage of children’s activities to keep the young ‘uns busy. If you venture here with children in tow, make sure to buy a Pariscope (found at most newsstands) and check the enfants section for current children’s events. 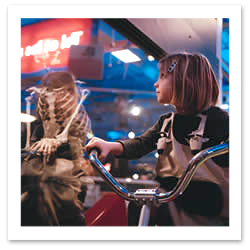 Paris has a number of museums that cater to the young, and the young at heart. The Cité des Sciences et de l’Industrie (30 av. Corentin-Cariou), at Parc de la Villette, is an enormous science center. The children’s area is divided into two main sections: one for children from three to five years of age; another for those from five to 12. Interactive exhibits allow kids to do everything from build a house and learn about communications systems throughout history, from the tom-tom to the satellite.

The Musée de la Poupée (the Doll Museum) is a cozy museum in the heart of the Marais, with a collection of more than 500 dolls dating back to the 1800s, complete with costumes, furniture, and accessories. Labels might be in French, but they’re not really the point anyway. The museum features a “Doll Hospital,” where “sick” dolls and plush toys come to be repaired; the doctor is in on Thursday, but free estimates are offered throughout the week.

The Palais de la Découverte (the Palace of Discovery) has high definition, 3-D exhibits covering everything from chemistry, biology, physics, and the weather so there’s bound to be some interesting dinner conversation when the day is done. Many of the displays are in French, but that doesn’t stop most kids from having a blast; hands down, the choice between this and the Louvre is a no-brainer.

A zoo is usually a good bet to get the kids’ attention, although you might want to keep in mind that most European zoos aren’t as spacious as American zoos. The Ménagerie at the Jardin des Plantes, is an urban zoo dating from 1794 and home to more than 240 mammals, 400 birds, 270 reptiles, and a number of insects. The huge Parc Zoologique, in the Bois de Vincennes, is the largest zoo in Paris, although parts are closed for renovation; the bonus of taking the metro out here, though, are the park’s two lakes, both with rentable rowboats. When it comes to spectacles, what child would pass up the circus? There are several in the city, and the Cirque de Paris (115 bd. Charles-de-Gaulle, Villeneuve-la-Garenne) has a special feature called a “Day at the Circus” — your kids (and you) can learn some basics like juggling, then you’ll lunch with the artistes and see a performance in the afternoon.

Of course, the best sight in Paris is the city itself, and a boat ride on the Seine is a must for everyone. It’s the perfect way to see the sights, rest weary feet, and depending on which option you choose, lunch or dinner may be part of the treat. 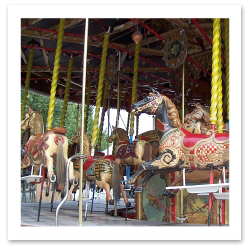 Most kids are thrilled (at least more than the grownups) at the prospect of climbing
innumerable stairs to be rewarded with cool views: the Eiffel Tower is the quintessential Paris climb but Notre-Dame gets extra points for the gargoyles, and the Arc de Triomphe is a good bet, since it’s centrally located at the end of the Champs Elysées.

When it comes to open spaces for running around, Paris has lots of park options, with extra attractions in summer when kids can work off steam on the trampolines or ride ponies at the Jardin des Tuileries. The Jardin du Luxembourg has a playground and a pond where kids can rent miniature boats, and the Bois de Boulogne has a zoo, rowboats, bumper cars, and lots of wide-open spaces.

Iceskating is seasonal but always a thrill, and from mid-December through February, several outdoor Paris sites are turned into spectacular ice-skating rinks with Christmas lights, music, and instructors. The rinks are free to the public; skate rental for adults costs £5. The main rink is at place de l’Hotel de Ville (the square in front of City Hall) but the rink on the Eiffel Tower’s first level, though small has prime novelty value.

There’s something about exploring underground that seems to fascinate kids, at least the older ones. Les Egouts, the Paris sewer system, has a certain gross factor but isn’t actually that disgusting. Keep in mind, though, that the smell is definitely ranker in the summer months. At the Catacombs, in Montparnasse, dark tunnels filled with bones are spookily titillating — at least for those not prone to nightmares. 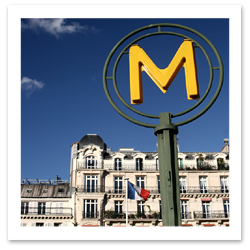 For some cheap underground entertainment without the ick factor, the métro itself can be its own sort of adventure, complete with fascinating station art such as the submarine decor at Arts-et-Metiers, the colorful Parisian timeline murals at Tuileries, or the Egyptian statues of the Louvre-Rivoli station.

All that fun will no doubt bring on an appetite and there’s no shortage of special places to stop for a snack in Paris. Angelina (226 rue de Rivoli) near the Jardin des Tuileries is world famous for its hot chocolate — deliciously thick and yummy, unlike what American children are usually used to. Berthillon (31 rue St-Louis-en-L’ille), renowned for their decadent ice cream, has outposts around town, including on the Ile St-Louis — though the Amarino gelaterias give them a run for their money. And when in need, a patisserie selling chocolate croissants is never hard to find. French children adore the pastel clouds of meringue (which resemble hardened whipped cream puffs) that decorate almost every bakery’s window, and there are all sort of cookies to tempt a smile from a tired tot.