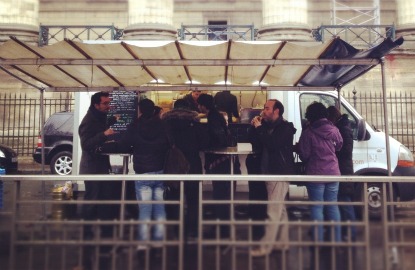 Sometimes a bite on the go is just the thing when busy exploring Paris. Once considered gauche—as Parisians are sticklers for sit-down meals—there’s a new trend of spots to grab gourmet snacks meant to be taken out and eaten pronto. Here are a few top places for a quick, delicious bite on the run.

American chef Kristin Frederick’s Le Camion qui Fume (“the smoking truck,” pictured above), has Paris foodies all aflutter. Maybe it’s the love of all things American, or maybe the tasty gourmet burgers, fries, and onion rings, but for Parisians to wait in the cold for over an hour to snag a meal served from a truck, it’s gotta be good. Check their web site for menus and daily locations.

You’ll know you’ve found L’As du Falafel in the Marais by the throngs lining up outside, where the fresh, veggie-stuffed pitas are assembled and dispensed through a window with impressive speed. More than just a snack, these copious sandwiches are best enjoyed on a bench at one of several charming parks nearby, including the Place des Vosges.

Just down the street, line up outside the to-go window at Pozzetto, and when it’s your turn, be sure to sample the legendary gianduia gelato, a velvety chocolate-hazelnut blend. Gelato here is artisanally made on the premises in favors like fresh fig, pistachio, and glacéed chestnut, along with seasonal fruit sorbettos. And the Italians behind the counter will serve you some of the best coffee in Paris.

On warm days, the lively waterside scene at Canal St. Martin is dotted with pink helium balloons, signifying groups waiting for delicious pizza to arrive. Known for original, quality toppings, Pink Flamingo pizza is ordered at the nearby shop and delivered right to your balloon-marked, canal-side spot.

As lovely as it is to snack on a plate of Iberian ham and an inky glass of Morgon at their always crowded restaurant, if you’re in a hurry, the crêpes and sandwiches sold at the miniscule window of L’Avant Comptoir’s (3 Carrefour de l’Odéon, 6e) are a great quick fix before a night out on the Left Bank.