If you thought drinking wine along the Seine was fun, how about a private party in a teepee? Thanks to a plan initiated by Mayor Bertrand Delanoe of Paris, visitors can now do this—and more. Last week, Mayor Delanoe opened pedestrian-only, 1.4 mile stretch along the Left Bank that had previously been limited to cars. It’s the culmination of a 35 million euro ($47 million) project started back in August 2010, which has seen the Left Bank transformed into a cultural activity hub complete with barges moored on the river that play host to cultural and food hot spots, as well as river cruises. 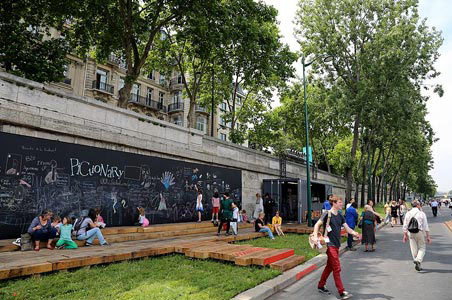 The revamped zone of the Left Bank hasn’t just been opened to pedestrians, but transformed into a playground of sorts for children and grown-ups alike. Kids can explore the "archipelago" area, which consists of five interconnected floating islands, or even book a birthday party in the teepees, complete with cake catered by the mobile trattoria Mozza & Co. and board games. There’s also a giant slate wall equipped with chalk for doodling, a climbing wall, a whimsical playground, and "le Satellite des Sens," a bright green bus that takes kids on an "artistic discovery tour of the five senses." 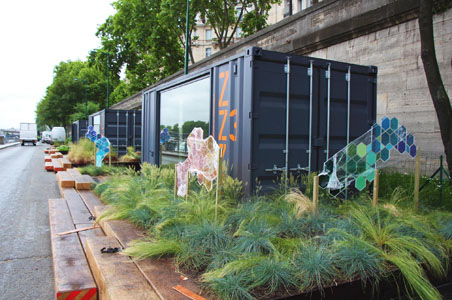 Meanwhile, parents can kick back and relax at "Zzzz," a row of renovated shipping crates in the midst of an intimate garden space where you can book a mid-day nap or just play cards and enjoy a quiet, catered meal. Grown-ups in a more festive mood will enjoy the giant speakers installed under the Pont de la Concorde, which will play TSF Radio Nova and jazz music—or the tunes of your choice if you plug in your personal music device. A four-lane running track is available to burn off excess energy; runners can even book a personal coach and grab a sports bracelet to track their times.

All the exploration of this new mile-long stretch means you’re bound to work up an appetite. Thankfully, new restaurants have cropped up on the terraces. Check out Le Quai, housed in a 1920s Venetian vaporetto, for lunch, or Faust, for dinner and cocktails (open to revelers until 1 am). Upstream of the Pont Alexandre III bridge is Flow, a great spot for drinks and a casual meal on the banks of the Seine. 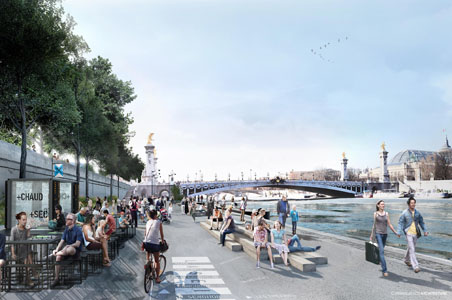 Mayor Delanoe said he hoped the revitalized left bank would let the Seine once again be devoted to "beauty and the pleasure of living," and from the sound of it, this very Parisian sentiment has been achieved. For a full schedule of activities and features, check out the official Les Berges site.