News Apeksha Bhateja What Are the Chances You'll Get Monkeypox at a Hotel?
NewsParis, Hemingway Style 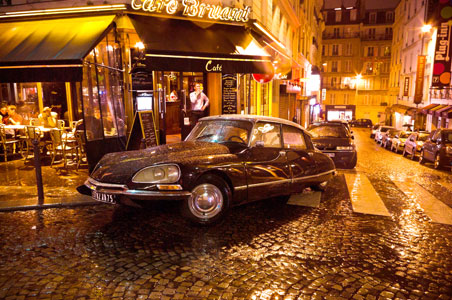 A little hunger is good for writing, Hemingway would tell you. So is being far away from the world you’re writing about. Back when he was inventing the writer we now know so well, he parked himself and his blue cahier notebook in various ex-pat cafés and pitched himself from his Michigan boyhood, a process he called "transplanting."

When I wrote feverishly of Paris from a Starbucks in Cleveland, I was flat broke. "Transplanting" was the only available option. I read Hemingway obsessively until his Paris fit squarely in my head, and I could maneuver there daily, hooking myself in imaginatively, seamlessly, even with a blender going furiously in the background.

When I had a draft of The Paris Wife in the vault and finally had means and time to travel, I confess I was more than a little afraid to actually go to Paris. I’d practically memorized A Moveable Feast; wasn’t that a little dangerous? Wasn’t that Paris, the one I was desperate for, buried back in 1923?

Alas, no buttery Peugeot (a la Midnight in Paris) materialized to whisk me off to a jazz-age dance hall. Too jet-lagged to read my map, I dragged my rain-drenched luggage through the Latin Quarter searching for my tiny hotel. But didn’t I know these streets? Here was the Place Contrescarpe, where in Hem’s day bums crawled from Café des Amateurs to the nearest doorway to sleep off the night’s indiscretions. Tucked around the corner was the chipped blue door 74 Cardinal-Lemoine—the apartment where Hadley and Ernest Hemingway lived when they first moved to Paris, in December of 1921. It was still there—and that’s the marvelous thing about Paris. It’s sort of always all still there, haunted by itself through the centuries, changing gradually, of course, but never up and abandoning itself. 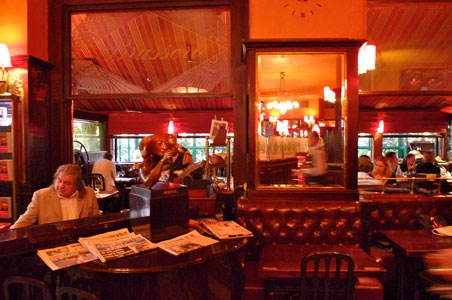 If you’re so inclined, then, you can take your well-fondled copies of A Moveable Feast and The Sun Also Rises and transplant yourself pretty readily. It will take a bit more cash than in Hem’s day, naturally. He rented his unheated garret studio at 39 rue Descartes for 60 francs a month. You’d be hard pressed to squeak a few Kirs and tartare de boeuf at Les Deux Magots for that price. But it’s also sort of priceless—no?—to sit beneath the unblinking gaze of the two Chinese dignitaries, high above on their pillar, where long before Hemingway and Janet Flanner came for "serious talk," Verlaine took tea with Mallarme, and Oscar Wilde trained his barbed attention at passersby.

Or save your euros for a blowout lunch at the Closerie des Lilas, where dazzling, frenetic Montparnasse meets the Avenue de l’Observatoire. It’s perfectly dreamy—and perfectly maintained. Hemingway favored the marble tables on the cloistered, hedge-lined terrace where he could nurse a café crème for hours. I’d sit at the gorgeous bar and have a gin and tonic (or three) and a plate of briny oysters.

For nothing at all you can scoot along charming rue Mouffetard, where the fruit- and fish- mongers push into the cobbled streets, or weave through the beautifully ordered paths of the Jardin du Luxembourg, to stand before the imposing door of Gertrude Stein’s 27 rue de Fleurus, where Saturday evenings found Picasso and Fitzgerald, James Joyce and Matisse sipping eau de vie and blowing the doors off of the world of art and literature.

And if the dance hall next to 74 Cardinal-Lemoine is now a dress shop, and the Cezannes Hemingway visited everyday, "belly-empty, hollow-hungry," now hang in the Louvre instead of the Musée du Luxembourg, many more crucial things haven’t changed a whit since Ernest and Hadley gamboled through the streets looking for cheap hooch and good cheer. Their Paris is still there and more than enough.

Paula McLain received her M.F.A. in poetry from the University of Michigan and has been awarded fellowships from Yaddo, the MacDowell Colony, and the National Endowment for the Arts. She is the author of two collections of poetry; a memoir, Like Family: Growing Up in Other People’s Houses; and two novels, A Ticket to Ride and The Paris Wife. She lives in Cleveland with her family.