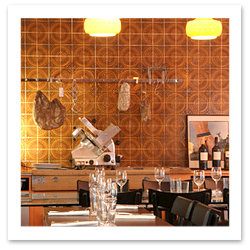 Unico. An architect and a photographer — both Parisians born in Argentina — teamed up to open Bastille’s hottest new restaurant — literally hot since the Argentinian meat served here is grilled over charcoal. Whichever cut of beef you choose (the ultimate being lomo, or fillet), it’s so melt-in-your-mouth that the sauces served on the side seem almost superfluous. Dessert won’t be necessary, but banana in dulce de leche could satisfy the strongest sweet tooth. Be sure to order an Argentinian wine, the perfect accompaniment for this bold cuisine. 16 rue Paul-Bert, Bastille/Nation. MC, V. Closed Sun and Mon. No lunch. €€-€€€ (photo, right)

Ribouldingue. Find offal off-putting? Don’t let that stop you from going to this new bistro near the ancient St-Julien-le-Pauvre church, where off-cuts take pride of place on the great-value prix-fixe menu. You can avoid odd animal bits completely by opting for dishes such as marinated salmon and seared tuna with slow-cooked eggplant, or go out on a limb with the tétine de vache (thin, breaded and fried slices of cow’s udder) and groin de cochon (the tip of a pig’s snout). The adventurous menu is the brainchild of Nadège Varigny, daugher of a Lyonnais butcher and former manager at the wildly popular bistro La Régalade. She oversees the dining room while chef Guy Bommefront turns out the impeccable food. 10 rue St-Julien-le-Pauvre, Quartier Latin; MC, V. Closed Sun. No lunch Sat. €-€€

Boucherie Roulière. If it’s steak you crave, put your faith in Jean-Luc Roulière, a fifth-generation butcher who opened this long, narrow bistro near St. Sulpice church in spring 2006. Start with truffle-scented ravioli or an unapologetic marrow bone before indulging in a generous slab of Limousin or Salers beef, excellent veal kidney or, for the meat-shy, perhaps lobster or sea bass. The minimalist cream-and-brown dining room with checkerboard floor tiles and black-and-white photos on the walls keeps the focus on the food, and waiters are of the professional Parisian breed. 24 rue des Canettes, St-Germain-des-Prés. MC, V. Closed Mon. €-€€ 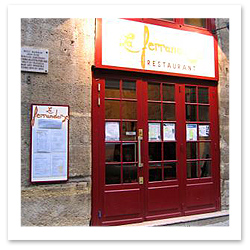 La Ferrandaise. Portraits of cows adorn the walls of this stone-walled bistro near the Luxembourg gardens, showing the northern French chef’s penchant for meaty cooking (Ferrandaise is a breed of cattle). Still, there is something for every taste on the market-inspired chalkboard menu, which always lists three meat and three fish main courses. The dining room, whose focal point is a big chandelier, buzzes with food-loving locals who appreciate the good-value prix fixe meal. 8 rue de Vaugirard, St-Germain-des-Prés. AE, MC, V. Closed Sun. and Mon. No lunch Sat. €€ (photo, right)

Le Temps au Temps. Youthful Lyonnais chef Sylvain Endra works with quiet confidence in the tiny kitchen of this always-packed bistro. Each day he dreams up new ways with food that keep the regulars coming — perhaps spiced mackerel fillets perched on a marrow bone, or pot-roasted skate wing in a curry-scented broth. For dessert, expect the likes of dense chocolate terrine with homemade honey sorbet. There are a few seats at the bar for solo diners, and the prix fixe lunches are a real bargain. Service, from the chef’s wife, could not be more thoughtful and attentive. 13 rue Paul Bert, Bastille/Nation. MC, V. Closed weekends and Aug. €€

La Cerisaie. Cyril Lalanne belongs to a breed of young chefs who like to cook for a privileged few. If you’re clever enough to nab a seat in this unremarkable yellow-and-red dining room (be sure to call ahead for lunch or dinner), you’ll be rewarded with cuisine so artfully prepared it’ll restore your faith in humanity. Foie gras makes several appearances on the chalkboard menu, since Lalanne is from southwest France, but you’ll also find freshly caught fish and perhaps farmer’s pork from Gascony. Lalanne does his own variation of baba au rhum, — with Armagnac, and the wine list is strong on southwestern French bottles. 70 bd Edgar Quinet, Montparnasse. Reservations essential. MC, V. Closed weekends and Aug. €€

See Fodor’s Paris for more information on dining in the City of Light.