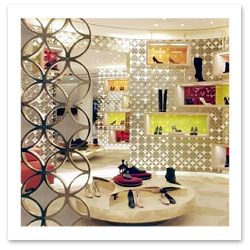 Even with the Euro trouncing the dollar, there are still some sound reasons to shop in Paris. It is Paris, after all. First, some ground rules. Stay away from the biggies — Chanel, Louis Vuitton, Dior. They’ll cost you the same at home. Instead, seek out French-made and other European items that you can’t buy at boutiques at home: a tee from Petite Bateau, for instance, will be less than half the price in Paris. And not-so-famous-yet-designers still hard to find in the U.S. — Vanessa Bruno, Paul & Joe, Isabel Marant, and Antik Batik — will cost less in Paris, too. And if you do feel the need to really indulge, where better than Paris to do so? At home, when your friends ask where you got those to-die-for shoes, with a shrug you’ll casually say, “These? Oh… I bought them in Paris.”

Champs Elysées and Avenue Montaigne
Step into your Chanel suit, gird your loins and plunge into Paris’s most daunting hunting grounds. Once Paris’s most elegant Grand Boulevard, the Champs Elysées has suffered the blight of megastores, fast food, movie chains and the like, but once off the avenue, you’ll get a sense of what it once was. Palatial old mansions now house embassies and boutiques, all with liveried doormen who will take the measure of you, and find you lacking. Not to worry. Just hold your head high, flash your platinum card, and don’t forget not to smile.

Best Time to Go
While for most shopping areas in Paris we advise weekday afternoons when crowds are tame, here you might want to consider a weekend visit.

Best Find for Your Sister
If there’s one place sure to give bang for the buck, it’s Petit Bateau. Their adorable, soft cotton T-shirts are highly prized among Parisian women, and these wardrobe staples — including cardigans, wraps, and v-necks — come in colors that change with the season. Stock up — you can afford it!

Refueling
Not only is Ladurée (16 rue Royale) one of the world’s legendary patisseries, it also keeps great hours: from early breakfast (doors open at 7:30 a.m.) to a post-theatre snack, just amble over whenever the urge strikes. Go for a cup of their famously rich hot chocolate, a refreshing coupe de champagne, a melt-in-your-mouth mille feuille, or a hearty club sandwich.

What You’ll Want
Gaultier — Only his spectacular garments could outshine this fantasyland boutique.
Balenciaga — Fashion’s reigning “it” boy Nicolas Ghesquiere does high-concept futurism in nylon and patent leather.
Celine — Feminine dress-for-success styles that appeal to women’s sensuality and smarts.
Dolce & Gabbana — Liberate your inner sex goddess: everything here is meant to entice, and succeeds.

Shoes & Accessories
Louis Vuitton — The cathedralesque Champs-Elysées megastore houses every line in a drop-dead gorgeous space.
Hermès — The go-to for those who prefer their logo discrete yet still want the instant recognition. (photo, above) 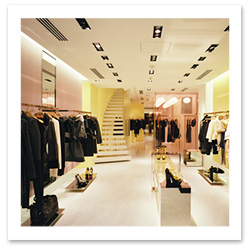 All the big names in luxury rub elbows here, along with scores of independents. What really makes this street special, though, is the plenitude of its attractions. Turn the corner and there’s the sweeping place Vendôme, an ex-palace and haven for world-class jewelers. Turn another corner and run up against a begloved and beribboned Elysées Palace guard.

Best Time to Go
Weekends can get crowded, especially at the major draws, like Colette. But maybe that’s the point: the fabulous seek to mull with their own kind, and aspirants can catch a few of their rays.

Best Find for the Babysitter
At the oh-so-fabulous Colette, head straight for the checkout counter for the adorable tongue-in-chic items in every price range. Cartoon-character key-chains and delicate silk-string bracelets (some with tiny diamonds) elate fashionistas — and it’s all wrapped up in a Colette bag. Sigh.

Refueling
A little coupe de champagne at the Hotel Costes reassures that you, too, are one of the anointed. Beware: drop-dead gorgeous waitresses tend to fluster the faint of heart. Chanel-suited dowagers know where to go for a luscious and restorative cup of hot chocolate.

Although you’re not likely to forget you’re in Paris, the pace here is noticeably slower, and the shopping low-key. The area’s hipster equivalent of mom-and-pop shops ensure a few choice finds that will be seen on you and only you. Walk along Avenue Beaurepaire, the area’s shopping epicenter, toward the canal.

Best Time to Go
If you want to experience the neighborhood at its most tranquil, go on a weekday. If it’s the scene you’re after, try Saturday afternoon.

Best Find for a Picky Hipster
Cool, colorful bracelets and intricate Gothic-inspired chokers all in rubber at Idé Co. Or, go for an edgy cropped jacket from Oba Mercado General, the très chic Brazilian outfitter. 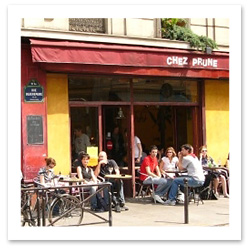 Refueling
To really immerse yourself in the scene, join the young designers and artists at Chez Prune (36 rue Beaurepaire). On warm days, its canal-side spot makes it the place to be. For atmosphere and a little history to boot, lunch at the Hôtel du Nord (47 rue Albert Thomas). Movie buffs will know it from the eponymous 1938 Marcel Carné film.

The Marais has just about stolen the show as the city’s hottest shopping spot. For sheer volume, it can’t be beat, not to mention atmosphere. The neighborhood’s newest frontier is its northeastern edge — the haute Marais — where ultra-stylish boutiques and design ateliers gather amid tiny century-old millinery shops. Between rue de Bretagne and Boulevard du Temple to the east you’ll find a la mode boutiques too numerous to list. Rue Charlot is one of the area’s primary draws, along with upper rue Vieille du Temple and rue de Poitou in between. 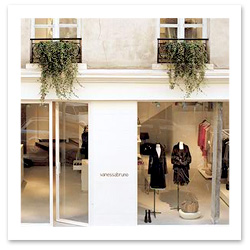 Best Time to Go
If being jostled by tourists and cranky Parisians isn’t your thing, venture here Tuesday and Friday after 11 am. Remember, the Marais is one of the few places in Paris where shops open up on Sunday. If you’re short on time or need a last-minute shopping fix, the Marais is your best bet.

Best Find for Your Co-Worker
For those challenged in the gift-finding department, you’ll think you’ve landed in heaven at Muji. This store has fun, unusual items for the office, home, and bath; many are purse-size, so they’re easily transportable.

Refueling
Lines are out the door for brunch at Le Loir dans la Theiere (3 rue des Rosiers), so go at tea time instead. It’s really what this place is all about — with its comfy, overstuffed chairs, large selection of teas and glorious pastries. Join the Parisians in their favorite activity and grab an outdoor table at Au Petit Fer a Cheval (rue Vieille du Temple), a prime people-watching spot (and the coffee’s not bad either).

Trendsetters line the streets from the rue Saints Pères, rue de Grenelle and boulevard Saint Germain, to the exquisite boutiques that border the charming streets near St-Sulpice, all the way to rue du Bac. To see it all would take weeks; with a well-drawn-out plan, however, you can see quite a lot in an afternoon or two. Then there’s always the option of doing what Parisians do best: stroll, observe, discover. 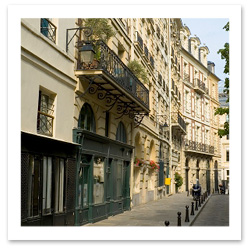 Best Time to Go
Although Tuesday through Friday afternoons are recommended, this area covers enough ground never to seem too overcrowded, even on weekends.

Best Find for a Sweet Tooth
Ladurée (16 rue Royale) — Those lighter-than-air macarons, in flavors like salted caramel, rose or cassis-violet, make a celestial offering. You can take it with you!
Pierre Hermé (72 rue Bonaparte) — Paris’s star patissier, offers a scrumptious lemon cake dense enough to survive the trip home.

Refueling
With the Luxumbourg Gardens nearby, pick up picnic savories from the excellent patisserie-traiteur-chocolatier Gérard Mulot (76 rue de Seine). Try a yummy shrimp-salad sandwich or paté en croute topped off with a few delectable macarons.
If you prefer to be served (however haughtily), the illustrious Café de Flore (172 bd. St-Germaine) offers better-than-average cafe fare.