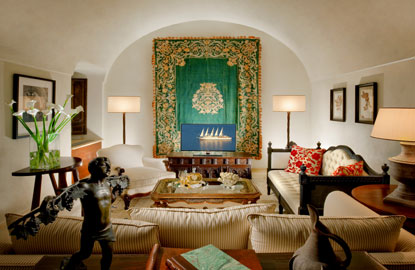 One of Italy’s most coveted properties opens up as the Amalfi Coast’s newest luxury hotel.

Long the most coveted property on the Amalfi Coast, perched on one of its highest peaks, and once the grandest monastery on the Divina Costiera, the Monastero Santa Rosa has finally opened its doors. The world’s press—and the very first guests, including Prince Albert and Princess Charlene of Monaco—have agreed that Italy has a new luxury hotel that was well worth the wait.

And we mean wait: it was founded as a closed-order Dominican monastery in 1681 and was exclusively the holy sisters’ terrain until 1912, when, after short runs as a full-facility hotel and bargain pensione, it fell into disrepair in the early 1970s. Then in 1999, while sailing the coast, American businesswoman Bianca Sharma cast her eyes heavenward to the cliffs above Conca, and spotted this Amalfitan Xanadu perched on a bluff 1,000 feet over the sea. It was love at first sight. The princely sum of almost $10 million was enough to beat off rival bids—even one from Italian kingpin Silvio Berlusconi, and after 11 years of painstaking renovation and $60 million, Sharma’s fairy-tale now has a happy ending.

As befits a sparkling jewel that crowns Conca, an idyllic seaside village called "paradise" by Lee Radziwill when she stayed there with her sister Jacqueline in the 1960s, the original structure has been kept intact, from the original monastery gates and ancient wooden doors to the wheel used by the sequestered holy sisters to exchange goods with the public.

On arrival guests are transported to another era with the tolling of a replica bell; the 19th Century furnishings and confessional boxes lining the long arched-ceiling corridors are constant reminders of the early days of this paradise. 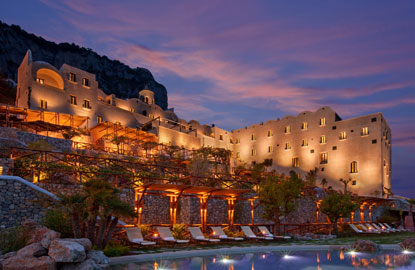 The guest rooms are sumptuous, and have been personally vetted by Mrs. Sharma herself (she has made a point of sleeping in each one), and each have a drop-dead gorgeous sea view. In fact Conca dei Marini’s motto "At each window, the sun, from each window, the sea!" was taken from the brochure of the previous, last century, incarnation of this hotel. Onetime cells for the sisters, their vaulted ceilings and Jerusalem stone pavements have been preserved (herbs and fruit names substitute for room numbers: lovely). Not familiar with any of these? Step down to the tiered garden, which is abundant with a wide variety, harking back to centuries past when these herbs were the ingredients for convent-made medicines. The lowest tier hosts the hotel’s spectacular infinity pool. Seemingly dropping directly down to the sea, it may steal the crown from Ravello’s Hotel Caruso as the most beautiful in Italy.

Santa Rosa’s spa is a case study in monastic architecture, with vaulted warm rooms connected by arched openings; the large Spa Suite ("a spa within a spa") also has a private al fresco jasmine-filled garden with, of course, the cinematic views Conca is famed for. The spa is open to non-residents, so treatments allow outsiders a sneak peek of the monastery.

Another way to enjoy the hotel without being a guest is to book a seat at the soon-must-be award-winning restaurant, where chef Christoph and sommelier Daniele are already creating never-to-be-forgotten feasts. Try the apple-smoked lobster on a spinach, nut, and celery bed or the delicious combination of sea-bass and green beans. All food is locally sourced (the pasta is prepared in-house) and the cellar boasts over 300 wines. Don’t leave without trying the famous Sfogliatella Santarosa, the sweet cream-cheese-and-ricotta pastry invented by the Dominican sisters back in the 17th Century.

Paradise on the Amalfi Coast. One wonders what the sisters thought of it!