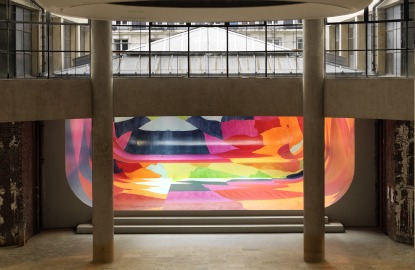 The hulking modernist building was built for the 1937 World’s Fair and since then has served as an exhibition space, film school, and archive. The Palais de Tokyo first opened there in 2002, and celebrates its 10-year anniversary at the same time as its reopening. With monumental spaces on the ground level—some overlooking the Seine—a multitude of light-filled galleries upstairs and a large, cavernous basement, the edifice’s vast potential as a multi-media arts center remains unrivalled in France.

The idiosyncratic and largely raw space covers four floors and represents 150,000 square feet of exhibition space, nearly triple the size of the previous Palais, making it Europe’s largest contemporary arts center. With concrete floors, exposed beams and ductwork, peeling plaster, pocked drywall, and a huge massive sculpture crashing through the lobby ceiling, the dramatic, deconstructed space is meant to evoke a work in progress—always renewed, never finished. As an aesthetic "blank space," artists are encouraged to use the space dynamically, so that the space serves them and not the other way around.

Plans for the Palais are ambitious and will include four to five major exhibitions a season, along with many smaller ones, including an artist-organized group exhibition, a guest-curated show, and a solo exhibition by an established French artist. Other institutions, foundations and art centers will be invited to design guest exhibitions that reflect their own artistic stance.

While the focus will be on giving young French artists a platform, the program includes international artists of all ages and disciplines, with the hope of creating "an atmosphere of amazement and perpetual discovery allowing the public to share the ongoing quest of new talents."

The new Palais’s first Triennial, titled "Intense Proximité," is curated by Nigerian poet and critic, Okwui Enwezor, and four other guest curators, and runs from April 20 to August 26.

For kids between the ages of five and ten, the Little Palais offers imaginative ateliers and activities (with schedules, prices, etc., listed on the Palais de Tokyo website). Eventually, the Palais will house four theaters for a film and concert series. The impressive Whiteblock bookstore has one of the city’s best selection of art books on everything from architecture to fashion. An ambitious gastronomic restaurant with a terrace overlooking the Seine is projected to open in mid-September. For now, the Japanese-style Le Tokyo Eat café—with cocktails conceived by an "artbarman"—serves meals and in-between snacks six days a week, from noon till 2:00 a.m.; and the conceptual "Buvette," on the gallery’s second floor, serves snacks and beverages.

What’s in the neighborhood?

Where to Eat: Les Tablettes, chef Jean-Louis Nomico’s lustrous new restaurant has garnered nothing but raves since opening last winter. A lively décor and superb, adventurous cooking (with an iPad wine list) make the four-course, €58 lunch menu well worth the splurge. Open 7 days a week.

Nearby Attraction: Monumenta, enters its fifth year with artist Daniel Buren taking over the soaring Grand Palais. May 10–June 21.

For up-to-the-minute hotel and restaurant recommendations, plus the best planning advice, check out our online Paris Travel Guide.