News Deanne Revel Now That Disneyland Has Canceled Annual Passes, What's Next? We Answer Your Questions 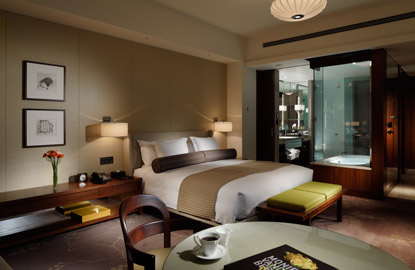 Where the old Palace Hotel once stood, near the Imperial Palace in Tokyo, Japan, the new Palace Hotel Tokyo is set to open its doors next month – May 17 to be exact. Its 290 rooms, including 12 suites and a range of six types of guest rooms, the hotel will also feature a basement level retail area with 17 shops, ten restaurants and bars (from French to sushi and from sleek lounges to a bright pastry shop), and an evian SPA (just the second of its kind outside France).

"This hotel is Japanese through and through, from its ownership and management, to its service protocols and its picture-perfect location by the Imperial Palace gardens and moats," said Palace Hotel Tokyo President, Takashi Kobayashi. "For domestic and international travelers alike, whether they’re with us for business or leisure, we hope they will walk away saying, ‘To have stayed at Palace Hotel Tokyo is to have experienced the very essence of Japanese hospitality."

The hotel is currently accepting reservations for dates May 17 and after. Rates start at $625/night.