Beaches Kaila Yu Do You Enjoy Visiting Hawaii? You Should Pay a Fee
Home  >  News   >   Padma Lakshmi on Travels, Top Chef, and Coffee 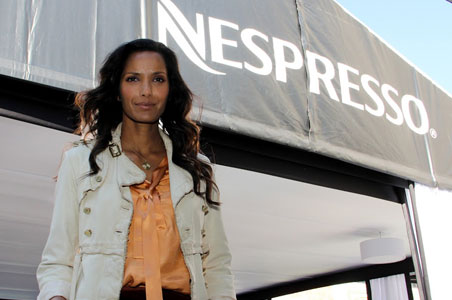 Model; cookbook author; and most notably, the Emmy-nominated TV host who sends chefs packing on Top Chef, Padma Lakshmi can now add coffee connoisseur to her resume. In her role as Nespresso brand ambassador, Padma promoted the new U machine at a pop-up café in NYC’s Meatpacking district recently, where she was kind enough to sit down with us for a klatch over her specially-made cardamom cappuccino.

Q. Have you been a coffee connoisseur for long?

A. I spent most of my twenties in Europe, living in Italy and France, and I loved coffee when I was there. Then, when I moved to the US, espresso was not much more than really brown water, so I stopped for most of my thirties. Then I rediscovered coffee after I got pregnant—I needed a little pick-me-up as a new mother.

Q. In your role as a Nespresso brand ambassador, have you visited any of their coffee producers around the world?

A. Not yet. But I would love to go to Africa and Sumatra and other places in Indonesia where they cull from. I want to see it all, from the picking of the coffee berry. The whole science behind it is incredibly interesting.

Q. The upcoming season of Top Chef will take place in the US coffee capital of Seattle. Will coffee play into any of the challenges?

A. I don’t think coffee plays that much into it. We didn’t want to be obvious, so we didn’t do that much with it. We were more concerned with the fish and the crab and the salmon. You’ll see a lot of that.

Q. Top Chef is going into its 10th season. Why do you think the show stays so popular?

A. Because our producers do an incredible job of making the show fresh every season and it’s also because we go to a different city each season. We always rely on that city and its local color to inform the challenges. We try and get local chefs on and feature ingredients that are indigenous to that part of the country. If we didn’t, the show would always be the same.

Q. Have you ever considered a season at an international destination?

Q. If you could get on a plane right now and have a cup of coffee anywhere in the world where would it be?

A. Brazil. I’ve never been. I would love to go to Rio or Bahia.

Q. Speaking of coffee—I really like the aromatic notes of the cardamom in this cup. What do you like to nibble with this?

A. I love to drink this in the morning because I’m not one of those people that likes a super strong bitter coffee in the morning. I feel that’s not gentle. The cardamom softens the edges so I think that’s good for the morning and it’s not too sweet. It would be delicious with a piece of crusty bread with goat cheese, drizzled with cardamom and honey. That to me is beautiful.

1 capsule of Indriya of India

½ cup milk of your choice

½ tsp of brown sugar in the raw

1. Pour the Indriya of India Grand Cru into a cappuccino cup

2. Mix the milk of your choice with the sugar and cardamom and froth the milk using the Aeroccino milk frother

3. Fill the cappuccino cup with the prepared frothed milk over the Espresso

4. Top with the crushed raw unsalted almonds, a grind of nutmeg and a pinch of cardamom