Deals Leila Najafi Attention West Coast: You Can Now Book Flights to Paris for as Little as $321
Home  >  News   >   Pack and Go: Madrid

Unlike most cities in Spain, Madrid lacks a regional character, which makes it either truly Spanish, if you feel the love, or soulless if you don’t. It was only in the 16th century that King Felipe II proclaimed this middle-of-nowhere town the capital, creating Madrileños out of a melting pot of Spaniards from the nether regions. Fast forward nearly 500 years and the fair capital prospers — rich in art, swanky food, and fab fashion. Old Madrid is a must-see, claro. But two newer districts — Salamanca and Chueca — give the capital its very modern stride. 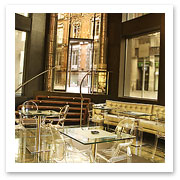 If you haven’t yet experienced an art coma, stroll down Paseo del Prado to the Reina Sofia, where you can take in daubs by Picasso and Miró and see works by many of today’s artists.

Hungry? If you’re not too bushed, hoof it across town to Casa Botín (Cuchilleros 17), where stoves have been burning since 1725. Hemingway liked the house suckling pig. You will too.

Push away from the lunch table like a good Spaniard at 4 p.m. and walk over to the Palacio Real for a stunned walk through the lavish quarters of Spain’s monarchs. Have a coffee at Café Oriente (Plaza de Oriente 2) before walking back toward the Old City. If you’ve still got steam, duck into the Real Academia de Bellas Artes de San Fernando (Alcalá 13), an art school once directed by Goya. Its galleries are loaded with superlative paintings from Spaniards Zurbarán, Ribera, Murillo, and Goya himself.

Having earned the traditional “marienda,” or late day snack, cop a caf&eacute table in the Plaza Mayor. Don’t bother dining in the restaurants that line the arcaded square — they’re selling views, not vittles. Instead, pop behind the square and follow the café-lined Cava Baja to the La Latina district for more tapas, beginning at the classic La Chata (Cava Baja 24). 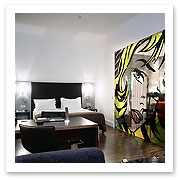 Pack it in at the AC Palacio del Retiro (Alfonso XII, 14, photo right). Management thoughtfully retrofitted 51 hotel rooms into the existing floor plan of a historically protected 100-year-old mansion. Parquet floors, leaded windows, and a spiraling marble staircase speak to the past while sleek rooms with modern furniture, flat-screen TVs, and platform beds point to the present.

In fur coats and toting Gucci bags, the residents of Salamanca are evidently fortune-blessed. When Spain’s leading Impressionist painter Joaquín Sorolla made it, he moved nearby too. His 1911 home and studio, preserved as the Sorolla Museum (Paseo del General Martinez Campos 37, photo below), exhibits both his sun-soaked landscapes and seaside portraits as well as the master’s fine collection of antiques on three floors. 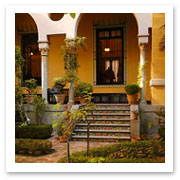 Fuel up for a shopping spree with lunch at Teatriz (Hermosilla 15), where Philippe Starck reimagined a rundown movie palace — note the exposed rafters over the stage — as a glammed up restaurant.

Like the fashions in these parts, dining is stylish at Dassa Bassa (Villalar 7), where chef Dario Barrio serves upscale dishes — think rare salmon topped by a wasabi noodle — in a sexy, subterranean setting. 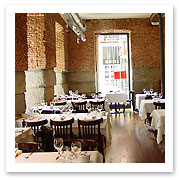 Break for a meal at Nina (Manuela Malasana 10, photo above), a sunlit contemporary storefront with updated Spanish food — think tuna loin with pickled fennel — and a bargain, four-course prix-fixe option at midday.

For tapas and a brush with celebrity, pick the low-key La Bardemcilla (Augusto Figueroa 47), run by actor Javier Bardem’s family. End the evening at Museo Chicote (Gran Via 12), a Bette Davis-era Hollywood hangout rediscovered by the new cinema set.

Click here to learn more about what to see and do, and where to eat and sleep, in Madrid.