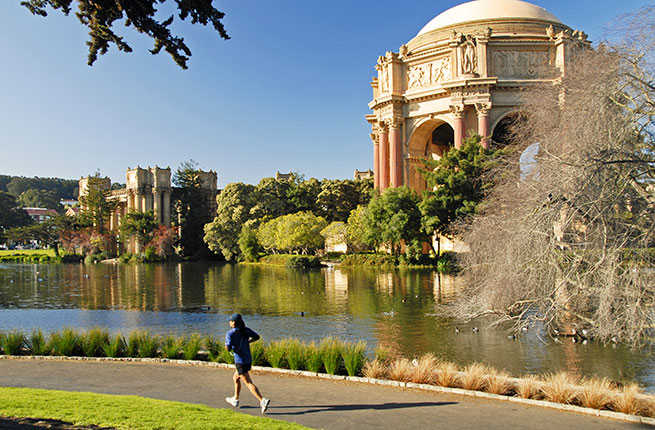 When you’re traveling, one of the best ways to get to know a new city and take in the sights is to lace up your sneaks and go for a run. Whether you’re ambling past the Eiffel Tower, smelling the roses in Hyde Park, or watching for Lady Liberty in New York, you’re in for a viewpoint different from the typical tourist grind. Here are some of the world’s best urban runs, guaranteed to give you a unique city introduction. Just remember to take a map.—Barbara Noe Kennedy 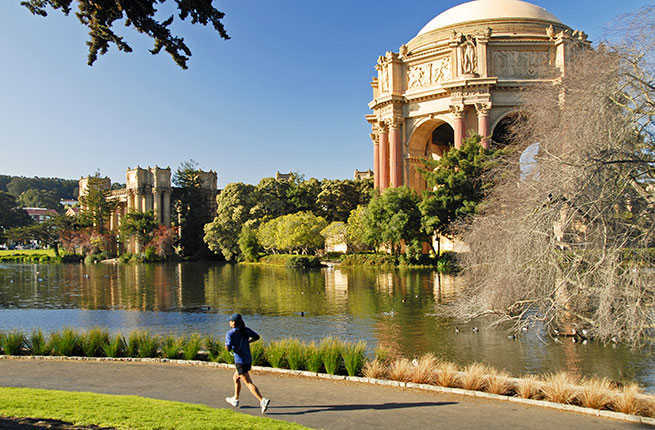 Route: The Embarcadero to Marina Green

Edging gray-blue waters, this sea-breezy route gives you a front-row seat of the City by the Bay. Give a wave to Pier 39’s barking sea lions as you make your way northwest along the Embarcadero. Weave through the fresh Dungeness crab stands of fabled Fisherman’s Wharf, pausing a moment at boat-filled Fish Alley, still a working dock (be here between 6 a.m. and 7 a.m. to see the fishermen hauling in their catch). You’ll saunter past Aquatic Park with its views of tall-masted ships, including the 1886 square-rigged Balclutha. From here, enter cypress-shaded Fort Mason, a former Army post jutting into the bay. You’ll have to catch your breath as you tackle a hill, but the reward is a cypress-framed view of the Golden Gate Bridge in all its glory. On the hill’s other side, you’ll flow into Marina Green, where you’ll be tempted to flop down and join the picnickers and kite-flyers. Or carry on, through newly restored Crissy Field with its sand dunes, bird-filled marshes, and bay views, and even up and across the famous bridge. 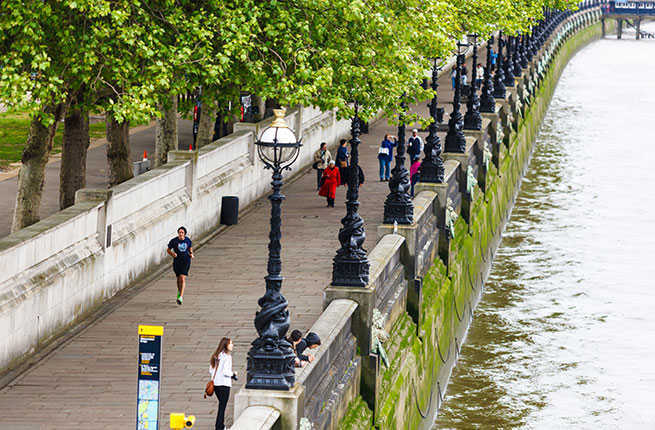 Kensington Palace is a regal place to begin this run through some of London’s most beautiful gardens. After all, it’s where Queen Victoria spent her childhood and Princess Diana resided after splitting with Charles. Make your way toward the long blue body of water called the Serpentine, a popular summertime swimming and boating hole. Swing past Speakers’ Corner, the open-air soapbox in Hyde Park’s northwest corner where protestors and debaters have spoken their mind since the early 1800s. Looping back to Kensington Palace, detour to admire the bronze statue of Peter Pan. 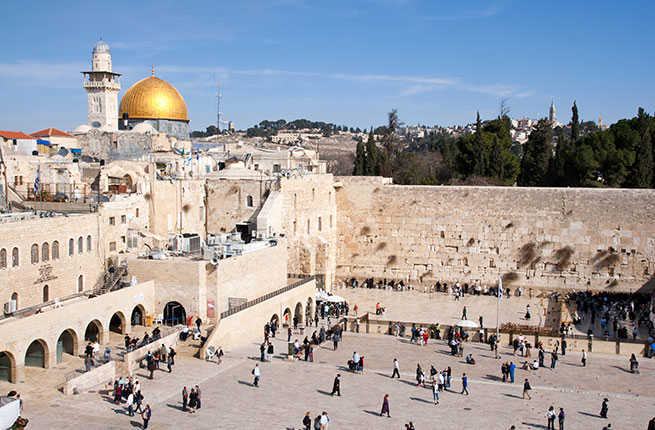 Route: A clockwise circuit of the Old City’s walls

Jerusalem’s ancient builders probably had no clue that the stone ramparts surrounding the Old City make a perfect run—a 2.8-mile loop, to be exact. Beginning at imposing Damascus Gate, you’re bordering the bustling Muslim Quarter as you head out on a clockwise route. Dung Gate, further along, is the closest entrance to the Western Wall, the Jewish holy site. Rounding the wall’s backside, you’ll see the Mount of Olives towering off to the left, rising above Kidron Valley. Along the south side awaits the great Jaffa Gate, then the New Gate. Look for the tiptop of the Church of the Holy Sepulcher, the grandiose basilica built above the traditional sites of the crucifixion, entombment, and resurrection of Jesus Christ, around which the Christian quarter thrives. And there you have it—in less than 3 miles, you have explored three of the world’s great religions. 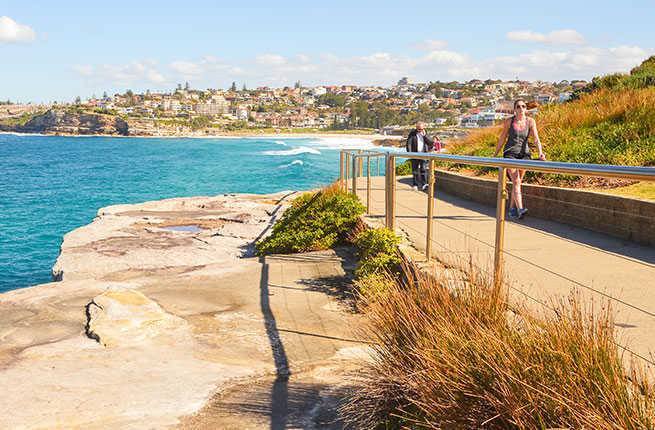 Sydney Harbour has been declared one of the world’s most beautiful places, with its iconic opera house and bridge edging cobalt waters. You’ll see all of it on this scenic run. Beginning at the famous Sydney Opera House, head through the historic Rocks neighborhood, Sydney’s birthplace. Climb the staircase that connects George Street with the on-ramp to the Sydney Harbour Bridge, and soon you’ll be sauntering high above the harbor, filled with colorful sailboats. Stop for a moment to pick out the Opera House, nestled like a brilliant white pearl at the edge of Sydney’s modern skyline. The bridge drops you into Kirribilli, North Sydney. Make your way east, through posh, tree-shaded streets, to Lady Gowrie Lookout. And from this hidden little outcrop, where waters lap and birds sing, you’ll get to see a different side of the gorgeous harbor. When you’re ready, retrace your steps. End the run on the Opera House’s plaza at the edge of the harbor, no doubt one of the world’s most breathtaking places to stretch. 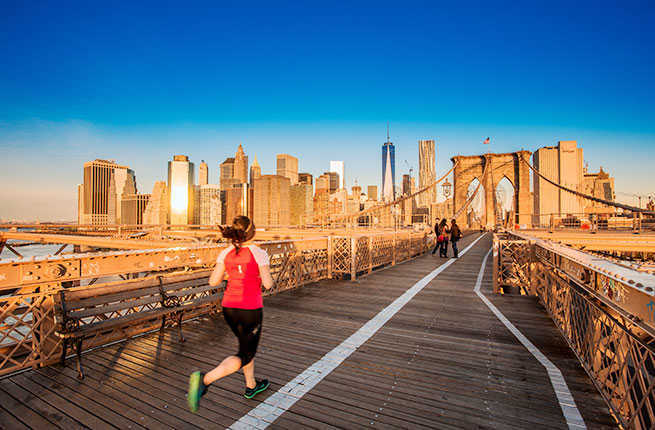 Mileage: 4 miles out and back

Most people head to Central Park for their NYC run, but for something different, try Hudson River Park on Lower Manhattan’s West Side. The broad, landscaped promenade overlooking the Hudson River moseys for 5 miles from 59th Street to Battery Park, offering state-of-the-art sculptures, rosy gardens, benches, and picnic spots. You can tackle the whole thing, but this run begins at River Terrace for an easy out and back. As you make your way, give the quick runner wave to your cardio-loving cohorts, including bikers, walkers, skaters, other runners—and probably a Wall Streeter or two rushing to or from work. Little by little, a speck out in the harbor grows larger, eventually turning into Lady Liberty. At the southern tip, you’re in historic Battery Park, the city’s first fortification. Catch your breath and return the way you came. 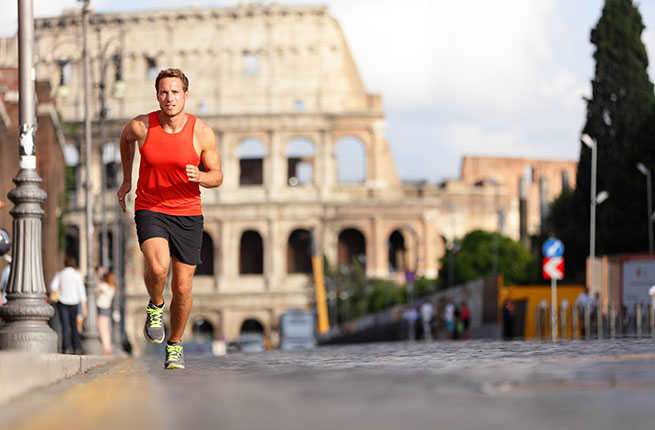 Route: The Imperial Forum & Beyond

This Roman run takes in more than 2,000 years of history and the heart of the Roman Empire, just like that. From the National Monument to Victor Emmanuel II, the wedding-cake monstrosity built to honor the nation’s first king at the turn of the 20th century, amble down Via dei Fori Imperali. As you pass by the ancient Roman Forum, look for Trajan’s Column, etched with reliefs that celebrate the emperor’s victories, and the classical columns marking the former temples of Saturn and Vesta. After paying homage to the imposing Colosseum, site of bygone gladiator standoffs, backtrack to Via Cavour and head up this main artery, turning left on Via dei Serpente. Stop at Piazza del Quirinale to squint and make out St. Peter’s Basilica, atop Vatican Hill off in the distance. From here, enter a maze of medieval, cobbled lanes, ending at Trevi Fountain. You can toss a coin over your left shoulder to see if you’ll return to the Eternal City, but please don’t be tempted to take an après-run cool-off in its waters—the Roman police frown upon anyone taking a dip. 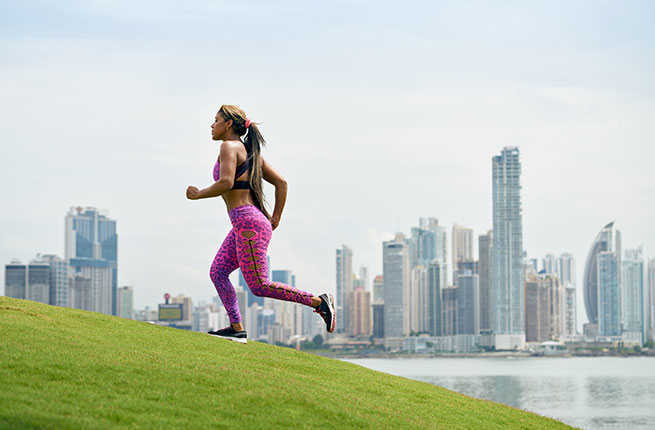 In the heart of Latin America’s “tallest” metropolis, with its bristling bouquet of cutting-edge skyscrapers, start your run on the southern end of the palm-shaded urban pathway paralleling the Cinta Costera boulevard. Ambling beside the glittering Pacific, you’ll get a good dose of local life: young soccer players kicking the ball in adjacent fields, vendors purveying Gatorade and cotton candy, lovers canoodling on the malecón, pram-pushing parents, and plenty of runners and walkers. Midway you’ll come to the gleaming statue of 16th-century conquistador Vasco Núñez de Balboa, the first European in these parts. At the pathway’s end awaits Casco Viejo, a historic quarter of brick lanes, Spanish Colonial churches and wrought-iron balconies. Explore a bit, and when you’re ready, head back to the future. 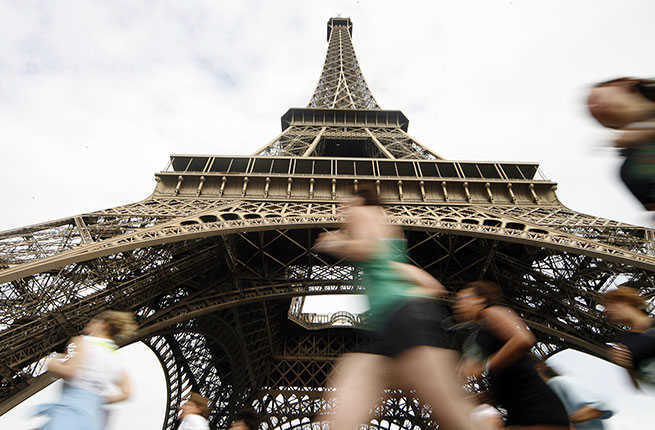 Mileage: One loop is 1.3 miles

The quays along the Seine are a popular running route—especially on Sunday mornings when they’re closed to traffic. But there’s something extra-special about the quietude and classic beauty of Luxembourg Gardens, on the border of the Latin Quarter and St.-Germain-des-Prés, where every morning a 1.3-mile, chestnut-shaded, gravel loop is taken over by contemplative runners. Around you go in a meditative state, past flower beds, baroque fountains, stately statues, and the 17th-century palace itself (where, actually, the French Senate meets). You don’t need to focus on traffic or directions; you just go, and go, and go. 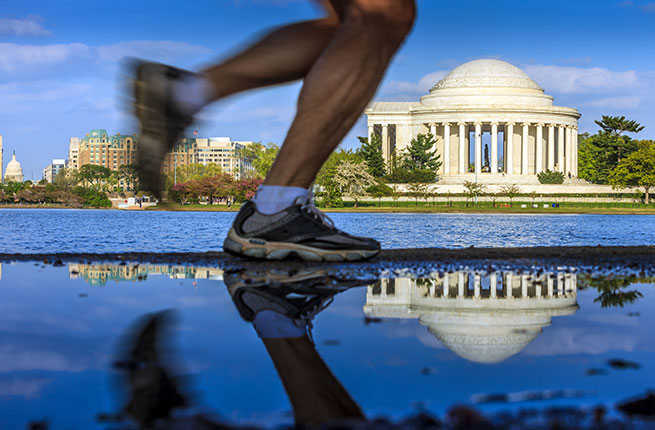 The nation’s capital is a running city, with lots of routes from which to admire flower-filled gardens, colonnaded buildings and tree-shaded neighborhoods. But the classic run—one that changes its look perennially with the time of day and the seasons—is the National Mall. Make a loop from the foot of the U.S. Capitol, heading out along the Mall’s southern pathways, then returning along the northern. Along the way you’ll pass by a check-list of DC’s must-see sights, including the Smithsonian’s famous museums (including the most visited, the National Air and Space Museum, and the newest, the National Museum of African American History and Culture), the Washington Monument, and the World War II Memorial. At the Lincoln Memorial, climb the stairs and take a breath, making sure to turn around and see the famous view of the Mall spread out before you in all its glory. 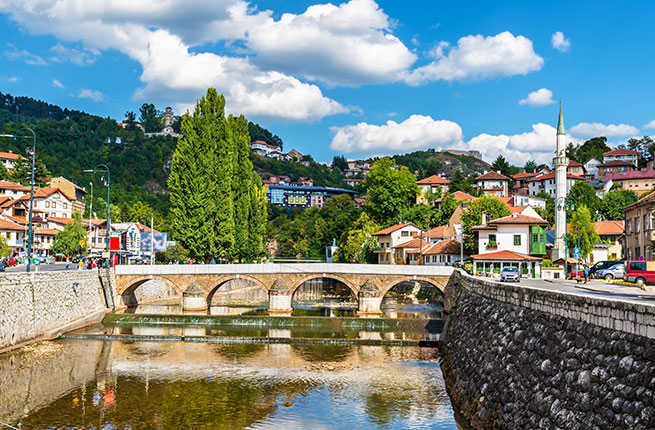 Once the darling of the 1984 Winter Olympics, the capital of Bosnia and Herzegovina was devastated by the Bosnian civil war of the 1990s, and even 20-plus years later its once-striking buildings remain blemished with bullet holes, caved-in roofs, and overgrown foliage. And yet, there are signs of hope as residents embrace life and look to the future. Beginning in Baščaršija, the Ottoman quarter, cross the Miljacka River, where the infamous Romeo and Juliet Bridge marks the spot where star-crossed lovers—one Bosnian, the other Serb—were killed on their flight to freedom. As you make your way upstream beneath the shade of lime trees, take in long-forgotten Olympics buildings and neglected fin-de-siècle architecture built by the Austro-Hungarian Empire. At the pedestrian Latin Bridge, the site where Archduke Ferdinand II’s assassination in 1914 kicked off World War II, turn back into the Ottoman quarter, where people of all religions mingle among mosques and churches and shops and restaurants.