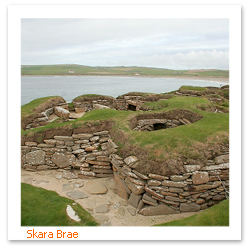 It’s desolate and beautiful, but unlike any place you’ve ever been…

Where: Orkney, Scotland, an archipelago of 70 islands, 20 of them inhabited, strung off Caithness, the Northernmost point of mainland Scotland.

Why: It has a wild, lonely, windswept beauty, and long summer days — more than 18 hours of daylight — in which to explore wildflower-covered hills and prehistoric settlements. There are so many of these that about a fifth of Orkney, the biggest island and called “the mainland” by Orcadians, is a protected UNESCO World Heritage site. The ancient builders vanished 3,000 to 4,000 years before the Vikings arrived in the 8th and 9th century. They hung around until the late 15th century, when Orkney joined Scotland, giving local culture, architecture, food and design a distinctly Scandinavian flavor.

Don’t Miss: A tour of the heart of Neolithic Orkney, taking in:

Skara Brae: A settlement of three 5,000-year-old dwellings and a workshop on the beach. The houses were buried in sand thousands of years ago and remained undisturbed and intact until they were revealed after a violent storm in the 19th century. Visit on a windy day when the sea, 50 yards away, is full of anger.

Maes Howe: A Neolithic passage tomb was discovered by Vikings who, like hooligans since time immemorial, couldn’t resist the impulse to make their mark on history. The interior is desecrated by what can only be described as graffitti — comments about girls of easy virtue, boasts about sexual prowess, and the like — written in runes!

The Ring of Brodgar: A massive circle of standing stones, many times the size of Stonehenge and several thousand years older, that lines up with enough landmarks and astronomical markers to keep New-Age theorizers busy for decades.

Also Worth Seeing: The Italian Chapel, built by prisoners of war. Two Nissen huts — the UK version of Quonset huts — were covered with trompe l’oeil paintings, fitted out with decorative wrought iron, stained glass and statuary and turned into an Italian Renaissance-style chapel.

Tasty Treat: Orkney crab is a delicacy all over Europe, and even the most unassuming greasy spoon here serves superb crab cakes, crab salads, crab soups. The oysters from North Atlantic waters are plump, clean, and pretty addictive.

Don’t Leave Without: Whisky from the island’s two distilleries, Highland Park and Scapa. And if the budget stretches that far, order up an Orkney chair made of driftwood and woven grasses using traditional methods.

Where to Stay: The Creel, a restaurant with simple rooms, is owned by Scottish Restaurant Chef of the Year 2006 Alan Craigie, on the harbor in St. Margaret’s Hope.

When to Go: Summers are mild and the wildlife is superb, but visiting Skara Brae on a dark and beastly winter afternoon is unforgettable too.

How to Get There: British Airways flies from Glasgow, Edinburgh, Aberdeen, and Inverness, and has direct flights from the USA through Glasgow and Prestwick (Edinburgh) Airports. Car ferries run from Scrabster to Stromness, and from Gills Bay, Caithness, to St. Margaret’s Hope. In summer, a faster passenger-only ferry service (40 minutes) sails from John O’Groats.