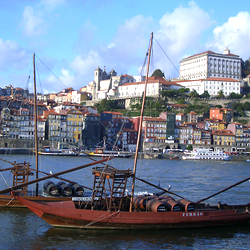 Where: The rich and rugged Douro River meets the Atlantic ocean at Oporto, the headquarters of port production some 200 miles north of—and a world away from—Lisbon.

Why: A skyline of weathered buildings stacked up the hilly Douro banks, handsome port-wine aging houses lining the riverbank, colorful bars and cafes.

Must Do: Wake, brush teeth, and plunge into a primer on the port wine business—Oporto’s reason for being—on the Vila Nova de Gaia side of the river (technically a suburb). Grape juice trucked in from the fields some 100 miles-plus upriver are combined with brandy and set down to age in long, low, red-tile-roofed buildings known as lodges. Replicas of “barcos rabelos,” the wooden ships that historically made the trip, line the waterfront. Famous port producers, including Sandeman, Porto Ramos, Croft, Calem and Taylor’s, offer inexpensive tours of the atmospheric cellars. Tours end in romantic tasting rooms for sampling. Do several tours; they improve with every glass.

Also Worth Doing: See the “azulejos,” or painted ceramic tiles that link several of Oporto’s top sights, including sacred murals in the Gothic cloister of the Se Cathedral and more profane depictions at the railway’s Sao Bento Station.

Don’t Leave Town Without: Doing a booze cruise. Wooden ships leave regularly from either side of the river, offering panoramic views of Oporto and its impressive bridges while a bartender pours rubies and tawnies to tipplers. 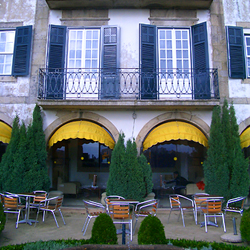 Where to Stay: Step out onto the balcony at the riverside Pestana Porto to view the port wine lodges and the neon signs announcing them across the water. Modern digs occupy three cleverly renovated riverfront townhouses dating back to the 16th century.

When to Go: It’s hot in the summer, cold in the winter, and most pleasant in between. But Oporto’s pleasures are not dependent on weather and should only be avoided in the coldest months, when cafe-sitting is done indoors.

Getting There: An express train from Lisbon takes about 3.5 hours.

Click here for additional information about Lisbon and Portugal