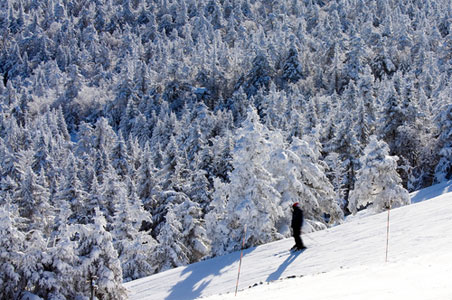 There are two kinds of winter weather—there’s the kind you trudge through in the city and the kind you escape to for fun ski and snowboard trips. Luckily, it’s easy to escape for some winter fun from NYC on these day (or weekend) trips just a hop, skip, and jump from the city. Just think, you can wake up in New York City, spend the day skiing or snowboarding, and be back in town that evening.

This Queens Boulevard-based shop is old school down to itâ€™s Ice Age website, but on the flip side, they have lots of experience in day trips, having run them since 1959.

Pros: Smoothest check-in process by far. Also, Emilio’s has partnered with other companies like Snowboard Escapes and New York Pipe Dreams to offer a great selection of destinations, including Okemo and Mount Snow, pick-up locations, and several weekday trips.

Cons: The website can be confusing and really needs an update. No refunds or exchanges, period.

Price: The priciest are the Mount Snow and Okemo trips, which start from $99 (including lift ticket), but doesn’t include a $5 service charge.

Pick-Up: Multiple locations including the Flatiron district, Upper East Side, and even Coney Island/Brighton Beach area.

Perhaps for marketing reasons, this trip has made inroads with a younger and more international downtown set. While it makes for hipper bus ride companions, there was also a lot more chatter on the way there and back. There are also affordable overnight trips to Killington, if you’re willing to shack up 4 to a room.

Pros: On a recent trip to Killington, the bus driver was not only skilled in the snowy conditions, but was generally an all-around cool guy. The trip leaders also had the best movies of the three, which can help the 4-5 hour trip fly by.

Cons: No water provided which means more planning on your part.

Price: $97.50 for Killington (but includes lift ticket, tax and booking fees); Hunter and Windham from $79.

Somewhat of a newbie to the one-day bus trip game, Paragon, with a sports store attached, has the brand name to back it up. On our recent weekend trip to Stratton, the bus driver needed extra directions and was less skilled with driving in inclement weather, which made the trip out longer.

Pros: Free bottles of water and bagels with cream cheese served in the morning. Easy to rent gear through the Paragon store. Also, it was a direct trip, whereas Urban Sherpa made another stop for pick-up.

Cons: The check-in process moved like molasses, which was especially grueling since we were standing outside in freezing weather at 4 am. Also, the bus driver, at least on this trip, didn’t seem experienced in the snow.

Price: $99 to Stratton, including lift ticket but not including tax. For Windham, rates go for $84, while Hunter starts from $79 and can go upwards, depending on the date.

Pick-Up: In front of the Paragon store on 19th Street and Broadway.