Deals Leila Najafi Attention West Coast: You Can Now Book Flights to Paris for as Little as $321
Home  >  News   >   Just Back From: Cruising the Galapagos Islands

Just Back From: Cruising the Galapagos Islands

A trip to the Galápagos Islands can be downright transformative—it’s little wonder that Charles Darwin learned to look at the world just a wee bit differently while visiting here. During my own recent exploration of this wildlife and wilderness wonderland, in the capable hands of the cruising expedition pros at Lindblad Expeditions, days were spent snorkeling amidst dozens of graceful sea turtles, as sea lions and penguins darted about in the distance. Mornings came marked by misted horizons, pocked with the spray of blue whales (the largest beings on planet Earth); trails led to the mesmerizing mating rituals of the enigmatic blue-footed booby; and inquisitive stares were shared with four-feet-long tortoises (real-life E.T.s!). The incessant thought running through my head through it all: "Wow, what a privilege it is to be here." 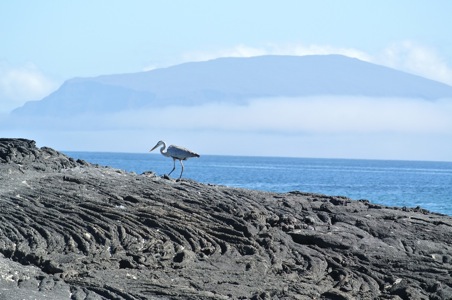 U.S.-based Lindblad Expeditions, founded in the late ‘70s, has only further bolstered its top-tier reputation with its nearly 10-year-old alliance with National Geographic. Their small-ship, adventure-driven, and conservation-minded itineraries focus on education and enrichment via cultural and natural immersion, in some of the world’s most far-flung and pristine locales—from Antarctica to the Amazon to Africa and beyond.

In fact, Lindblad’s predecessor actually pioneered cruise tourism to the Galápagos (ditto for Antarctica), bringing the first group of non-scientists to the islands back in the late ‘60s. Today, the line’s team of best-in-the-field naturalist guides, paired with sophisticated toys for exploration (a fleet of zodiacs, kayaks, a glass-bottom boat, and more), come together for thoroughly vetted and seamlessly executed year-round island itineraries on two ships. Last month, I got my Darwin on, aboard its 96-passenger expedition vessel, the National Geographic Endeavour. 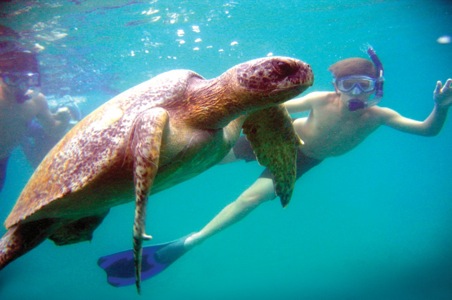 After a quick flight from Guayaquil, Ecuador, to Baltra—and the awaiting ship—in the Galapagos, we hit the ground running (er, sailing), and were soon out and about on the fleet of zodiacs, making a "wet" landing on Santa Cruz Island for some snorkeling off the beach (snorkeling gear and wetsuits were assigned to guests for the duration of the cruise). A short amble down to a picturesque lagoon, with soaring frigate birds overheard and bright red crabs underfoot, was met by a photogenic pair of bathing pink flamingos and a grooming blue heron—yes, indeed, we had arrived.

Over the course of the next week, our time would be divided between both land and sea adventures. From one pristine volcanic isle to the next, a series of naturalist-led walks served to illustrate their distinctive flora and fauna. Most astounding was the consistently fearless nature of the animals, seemingly unfazed by our presence; a byproduct, our guides explained, of having evolved here with no natural predators. Awed, we ogled and photographed perched flightless cormorants, sunbathing sea lions, colonies of marine iguanas, and the fascinating mating rituals of red pouched-frigates and Blue-footed Boobies. A trip to the Charles Darwin Research Station and surrounding highlands delivered up-close glimpses of the isle’s famed giant tortoises. 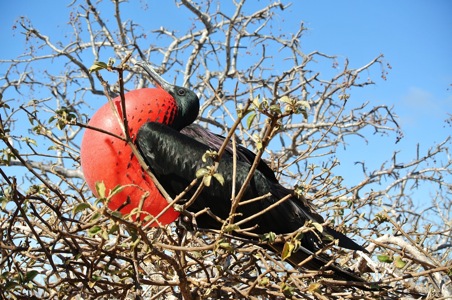 Taking to the sea, we kayaked for delightful eye-level encounters with frolicking penguins and sea lions, and glided over Technicolor displays of fish in the glass-bottom boat. Deep-water snorkeling reined supreme—those willing to brave the cold water temps (as low as the high 50s) were greeted by an undersea world of giant seat turtles and curious sea lions, shimmering schools of fish and lonely octopus, and seemingly out-of-place penguins and marine iguanas.

Through it all, Lindblad’s high-caliber "expedition team"—an expedition leader, cast of seasoned naturalists (one who doubled as Nat Geo-certified photo instructor), and an undersea specialist—delivered insight with a perfect blend of expertise and enthusiasm. Nearly all Ecuadorians, and many hailing from the islands themselves, their local knowledge lent well to the authenticity of the sailing. 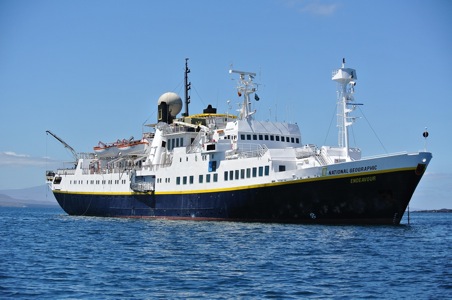 Public areas included an expansive, window-fringed lounge, the heart of the ship, which hosted special enrichment lectures, staff-led kids’ programs, and evening cocktail-and-hors d’oeuvres-fueled "recaps" of the day’s events—along with previews of the day ahead. 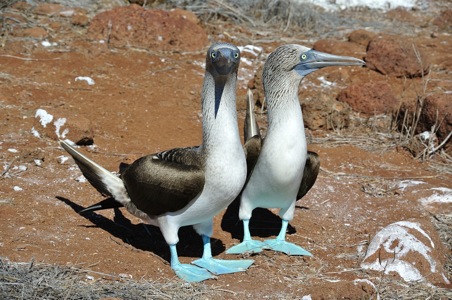 Meals were served in single seatings at unassigned tables (lending well to diversified socializing), with alternative light lunches dished out on deck. With hearty buffet options for breakfast and lunch, and plated dinners, food proved consistently tasty (our favorite was the buffet of Ecuadorian specialties), with a wide variety of fresh fruits and salads, and meat, fish, and vegetarian options.

Onboard atmosphere was laidback with casual dress. With less than a hundred passengers, there was fast and easy camaraderie between guests, mostly Americans who were bright, well-traveled, and well-to-do; many were first-time cruisers, and several were repeat Lindblad guests. Our multigenerational summer sailing had at least two dozen kids onboard, who made fast friends—notably well-behaved, we found that their enthusiasm about the region only amplified the magic of the place. 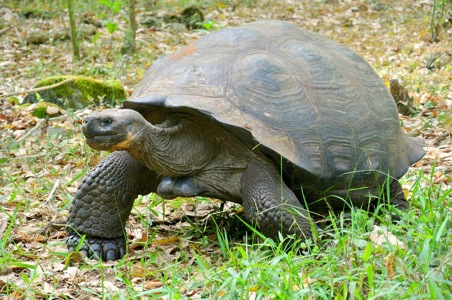 Lindblad offers year-round 7-night sailings aboard the Endeavour and 48-passenger National Geographic Islander; rates from $4,990/person, including all excursions, non-alcoholic beverages, use of snorkeling equipment, flights to the Galápagos from Ecuador, and pre- and post- hotel stay in Guayaquil. (Tip: Book an engaging 3-hour "city highlights" tour to maximize your stopover with Guayquil, A Guided Visit). Kids get $500 off—plus, book by November 30 for free flights on select cruises; www.expeditions.com.

Photo credits: Snorkeler courtesy of Lindblad Expeditions; all others courtesy of John Garay