Coronavirus Leila Najafi Want to Stay in Costa Rica for Over a Year? A New Law Might Help You
Home  >  News   >   Onboard the Airbus A380

Onboard the Airbus A380 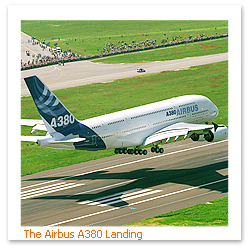 When the first commercial flight of a 747 took off from Washington D.C.’s Dulles Airport on January 22, 1970, critics carped that the plane was already obsolete. What did they know? The 747 went on to dominate the skies for the next three decades.

All of that changed last week when Europe’s Airbus unveiled its A380, a 239-foot-long double-decker that can hold as many as 555 passengers (in a three-class configuration) and fly at speeds of up to 560 miles per hour. Fodor’s got a sneak peek at one of the big birds earlier this week at Washington D.C.’s Dulles Airport.

Although everyone knows that bigger doesn’t necessarily mean better, the A380 easily makes the case that size matters. The first thing passengers are likely to notice about the main cabin is the increased head room. The ceiling height is a good two feet higher than on the 747, the closest thing in size to the A380. The width of the cabin is 23 feet, two feet wider than cabins on all commercial airplanes (the A380’s upper deck is 19 feet wide). The seating configuration in economy is 3-4-3, as on most 747s, but the grouping doesn’t feel half as cramped on the Airbus. 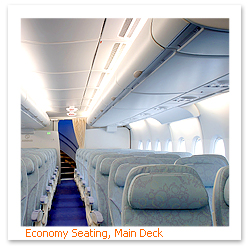 The plane’s designers worked overtime to create the illusion of infinite space, and it mostly works. Passengers entering the A380 walk into a large open entryway with soft lighting and cutaways that allow passengers to see far back into the plane’s interior. It’s a nice touch, and couldn’t be farther from what we get on planes today, where the first thing we see when boarding is the emergency exit across the aisle.

Galley areas and bulkheads have been supersized on the A380, and bathrooms widened. Bigger, too, are the overhead bins, which, says Airbus, offer 17 percent more stowage volume per passenger than those of the 747. Even the windows are larger on the A380, and there are more of them — 220 as opposed to 202 on the 747. Stairwells fore and aft are wide enough for two or more people to pass each other comfortably.

Reversing an industry trend of the past two decades, the A380 puts a premium on passenger comfort. Don’t like harsh lighting or cabins that are too dark? The lighting throughout the plane automatically adjusts to find the perfect balance between light and dark. Sick of dry air that makes your skin feel tight? Automatic climate controls keep cabin humidity slightly above average. Best of all, noise-reduction technology makes the A380 “the quietest cabin in the sky.”

But what do creature comforts ultimately mean to the portly gentleman stuck in a coach seat on an 18-hour flight? He’ll be happy to know that economy-class seats on the A380 are 18 inches wide, roughly one inch wider than seats on standard commercial jets. The 33-inch pitch isn’t an improvement over current standards, but he probably won’t care once he starts zooming through the channels of movies and TV programs available on the touch-screen monitor on the seatback in front of him. 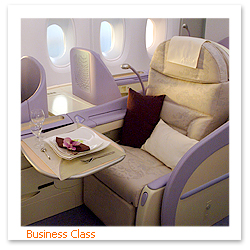 The happiest passengers, of course, will be those camped out in first class, where the seats fold out into luxurious beds tricked out with individual reading lamps. There are only 12 seats in the section (each airline will configure their first-class sections differently), so ballroom dancing before bedtime isn’t out of the question.

The best part of the plane might just be the lounge at the front of the second level cabin. Some airlines lining up to buy A380s are planning bars or cafes for this space while other carriers are talking about adding onboard casinos.

It’s nice to see the airline’s thinking big again. All the blue-skying is reminiscent of the early days of the 747, when airline honchos fantasized about adding swanky clubs, massage parlors, and restaurants to their planes. Ultimately most of those ideas were scrapped in favor of more seats and bigger profits.

At $300 million per plane, the A380, like the 747, can’t afford to be anything but cost effective. That said, foreign carriers aren’t running from the big bird. In fact, the A380 is gathering steam. Lufthansa, Air France, Qantus, Singapore Airlines, Thai Air, Kingfisher, Korean Air, and China Southern, among others, are all ordering up A380s. 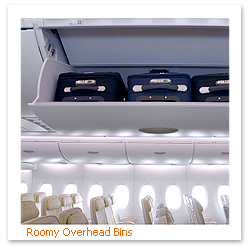 American carriers, however, are idling on the sidelines, waiting to see if the Boeing 787 Dreamliner, which enters commercial service late next year, will be the answer to our troubled airlines’ problems. Smaller and supposedly more fuel-efficient than the A380, the Dreamliner might just prove that smaller is better after all. That remains to be seen. Meanwhile, the Airbus A380 — all 569 tons of it — is hurtling toward a major runway near you.