The Descendants, starring George Clooney and directed by Alexander Payne, opens in select theaters on November 16th. We’re giving five lucky Fodorites the chance to win two tickets to see the film, copies of The Descendants book and Fodor’s Hawaii 2012, and more. 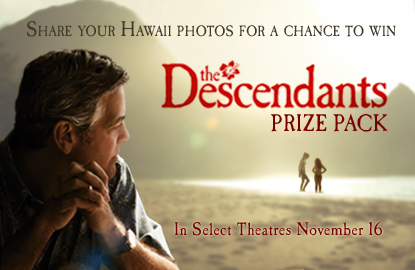 The film, set in Hawaii and adapted from The Descendants by Kaui Hart Hemmings is a sometimes humorous, sometimes tragic journey for Matt King (George Clooney) an indifferent husband and father of two girls, who is forced to re-examine his past and embrace his future when his wife suffers a boating accident off of Waikiki.  The event leads to a rapprochement with his young daughters while Matt wrestles with a decision to sell the family’s land handed down from Hawaiian royalty and missionaries.

Want to win tickets to see The Descendants?