News Apeksha Bhateja Have $340,000 and Want to Vacation in a Survivalist's Paradise?
NewsLondoners’ Top Getaways for Escaping the Olympics Crowds

With the world about to pour into London, many Londoners—faced with the prospect of a jammed Tube (posters are already up urging citizens to get to work by foot or bike), detoured bus routes, reversed one-way roads, re-phased traffic lights, and Olympic VIP-only lanes on major arteries—are planning their escape.

Many, of course, will take the opportunity to visit friends or relations. But if that doesn’t appeal, where to go? The nearby east coast (Norfolk, Essex, and Suffolk) is out because of the potential of getting caught up in Olympic traffic on the way out of the city, as the big Olympic events will be based in East London. Similarly, airports are going to be even more chaotic than usual, and getting to them will involve negotiating traffic caused by the dreaded Olympic bigwig lanes (given the nickname "Zil lanes", after the limousine model used by important Soviet officials who traveled in similarly reserved lanes).

This leaves destinations to the north, south, and west that can be reached by car, train, or ferry, close enough to be worth a short getaway in terms of time and expense, but that still make you really feel you’ve been away. 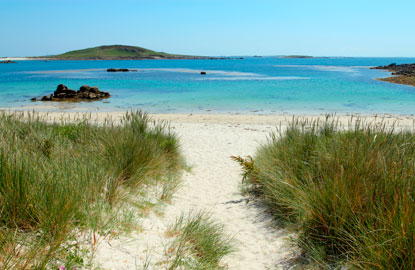 Off the west coast of Cornwall, to the far southwest of the British Isles, lie the Scilly Islands. Known for their white sandy beaches and micro-climates that allow palm trees and sub-tropical plants (especially in Tresco’s Abbey Gardens) to flourish, these five quiet islands (plus more uninhabited ones) offer a chance to truly get away from it all, particularly as the only way to reach them is by ferry, helicopter, or small plane. The ferries only go to the main island, St. Mary’s, so if you stay on one of the others you have to continue by small boat. If the fog sets in, you may find yourself staying a bit longer than planned.

Your plane will probably leave from Cornwall, a part of England with a distinctive culture (largely derived from the Celts who preceded the English) and atmosphere. A large contingent of London’s gilded youth decamps to the surfing beaches of Cornwall’s west coast, but the quieter Roseland peninsula on the south coast has many attractions, particularly the sandy coves and bays that in the past made it a pirate’s haven but now provide safe swimming. There are a number of charming hotels with excellent seaside views, notably The Lugger in Portloe and The Tresanton in St. Mawes. 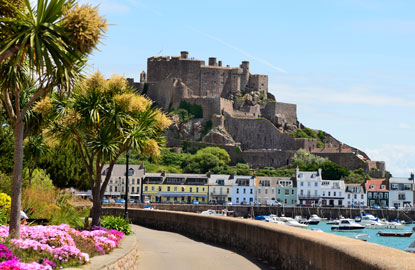 Just as other-worldly are the Channel Islands, which are in fact on the French side of the Channel and until the 19th Century spoke Norman as opposed to English. Although islanders are British citizens, they are not represented in Parliament and instead fall into two self-governing territories, known as bailiwicks. The islands’ independence from British tax regulations have made them a well-known tax shelter, a status reflected in their ambiance of genteel wealth. Even the two biggest islands, Guernsey and Jersey, offer a break from the hectic pace of 21st Century life, along with sandy bays, picturesque countryside, and rose-covered cottages, while the romantic smaller islands of Herm and Sark are so laid-back they don’t allow cars (take a tour in a horse-drawn carriage instead). 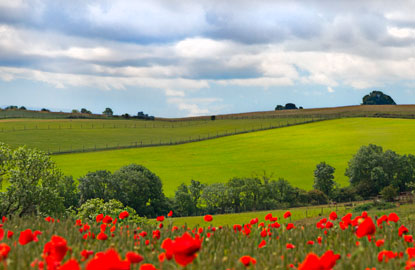 There are plenty of other destinations, including the classic English landscape and rolling hills of the Cotswolds (pictured), the open spaces of the Yorkshire Moors (more populated than when Emily Bronte wrote about them in Wuthering Heights but still ideal for a get-away-from-it-all hike), the wild beauty of the Scottish Highlands, and more. However, given that this spring the rainfall has been such that Britain has gone from being officially in drought to flood alerts, the smart Londoner may decide to go to St. Pancras International and hop on the Eurostar, which in summer goes direct to Avignon in sunny southern France. Regardless of which direction you choose, anywhere would be calmer than East London this season.